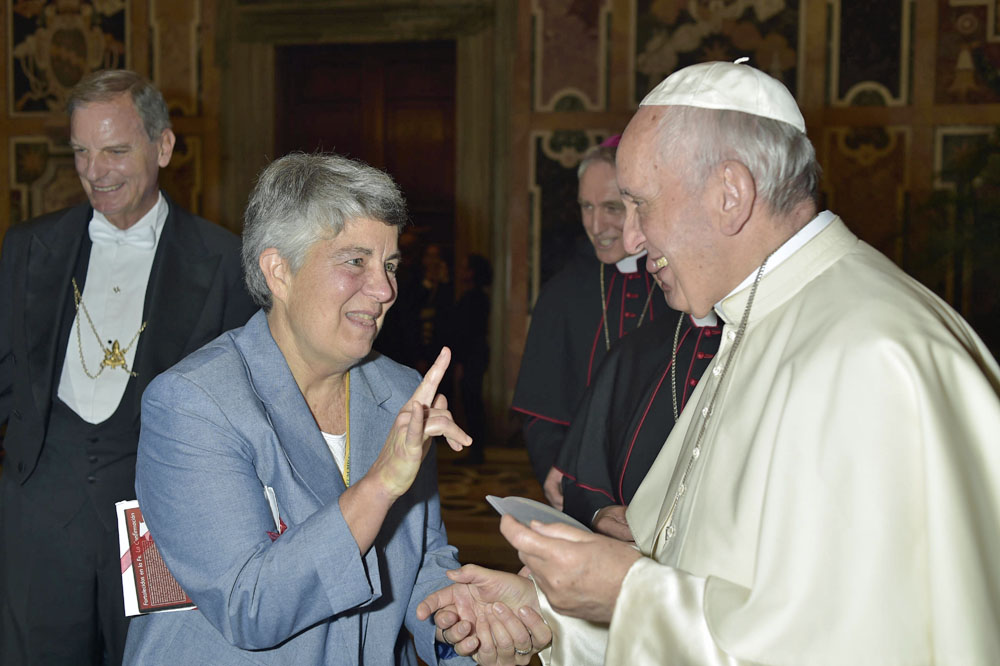 Sr. Kathleen Schipani meets Pope Francis on Oct. 21 at the conference Catechesis and Persons with Disabilities: A Necessary Engagement in the Daily Pastoral Life of the Church. (Provided photo)

Editor's note: People who are deaf and have a strong Deaf cultural identity use "Deaf" (capital "D"). They are a part of the Deaf community and identify with the culture. The lowercase "deaf" refers to the medical inability to hear.

Earlier this month, Sr. Kathleen Schipani of the Sisters of the Immaculate Heart of Mary launched Religious Signs for Families, the first app that teaches the American Sign Language for words commonly used in Christian life.

Schipani currently serves as the Archdiocese of Philadelphia's director of the Office for Persons with Disabilities and the Deaf Apostolate and is the board chair of the National Catholic Partnership on Disability. In January, she received the Pope Paul VI Award for Catechetical Leadership.

She spoke with Global Sisters Report about her ministry and why her app was necessary.

GSR: Before we talk about your app, I'd like to know more about how you started working with the Deaf community.

Schipani: A lot of people ask me that. In high school, I began working at a school and residence for young people with intellectual developmental disabilities, and I knew that somehow also was involved in my calling to religious life. Then I pursued religious life, always knowing that I wanted to be a special ed teacher.

I began to study special education and just took up one class in American Sign Language way back over 35 years ago to learn functional sign language that is often used with people who have intellectual developmental disabilities or delayed speech. And I really fell in love with the language. So I kept on pursuing it, not really knowing where that was going to lead me. 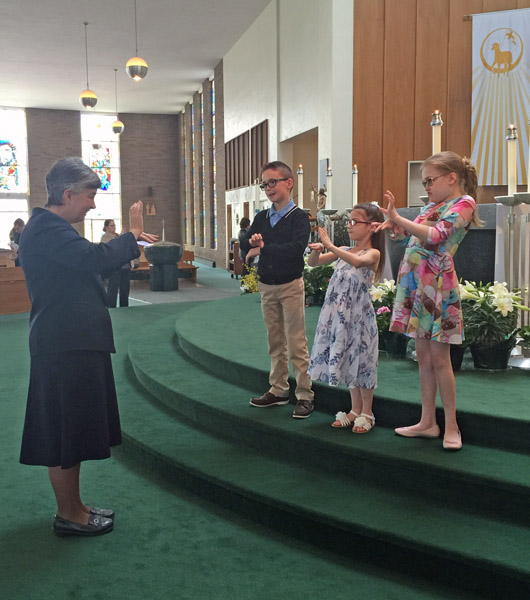 When I was teaching eighth grade, the parents of one of my students were deaf, so they would come up to school and assist me in learning more sign language. And they were so excited that a religious woman — a sister — would know sign language. They invited me to go to church with them where the Deaf gathered for Mass in American Sign Language. Then they began telling me about their need for someone who could teach their children in American Sign Language. The sister who had been doing that was aging and also was very sick at the time. So I started, very slowly.

The first children I taught were kids who actually had intellectual development disabilities and were also deaf. Then the next group of kids that I was asked to teach were teenagers, and I realized when I was working with teenagers that I wasn't on their level of quick signing. Also, teenagers, they tend on purpose to have adults not understand them.

So, really, it was through the invitation of the Deaf community.

What did that change for you?

There is a unique experience among children who are born deaf or who become deaf because of sickness early on in their development, before full language is developed, and that is that the parents have to learn sign language at the same time as the children, and that's not as easy as it sounds. Often, when parents are learning sign language, it's through a state school for the Deaf or an intermediate unit in the public school system, so they're not teaching them religious sign.

And, you know, with children, it's more difficult to convey abstract things to begin with. But then, when you're conveying the abstract thing in a language that you're just acquiring, it becomes very difficult. Even way back when I would be meeting children, I was providing them with the religious language for the first time. They might be 6 or 7, but they never saw the sign for "God."

It's quite different than a little child who, even if their parents are taking them to church or talking about religious things, they hear it. They might hear an aunt or uncle or a grandparent or a neighbor talking about God, talking about prayer, talking about what happens when someone in their family dies. That's not the case with a little deaf child whose parents are hearing. So it's very significant, the need for pastoral workers who either are deaf or who are hearing and know sign language to provide really good catechesis for children who are deaf.

So you had the idea for this app that could help with that. What then? What are the technical steps of making an app like this?

[Laughs] Well, I was really, really fortunate because I had been involved with helping to produce a few religious videos with a group of deaf people, and we used a company called CANCAN. 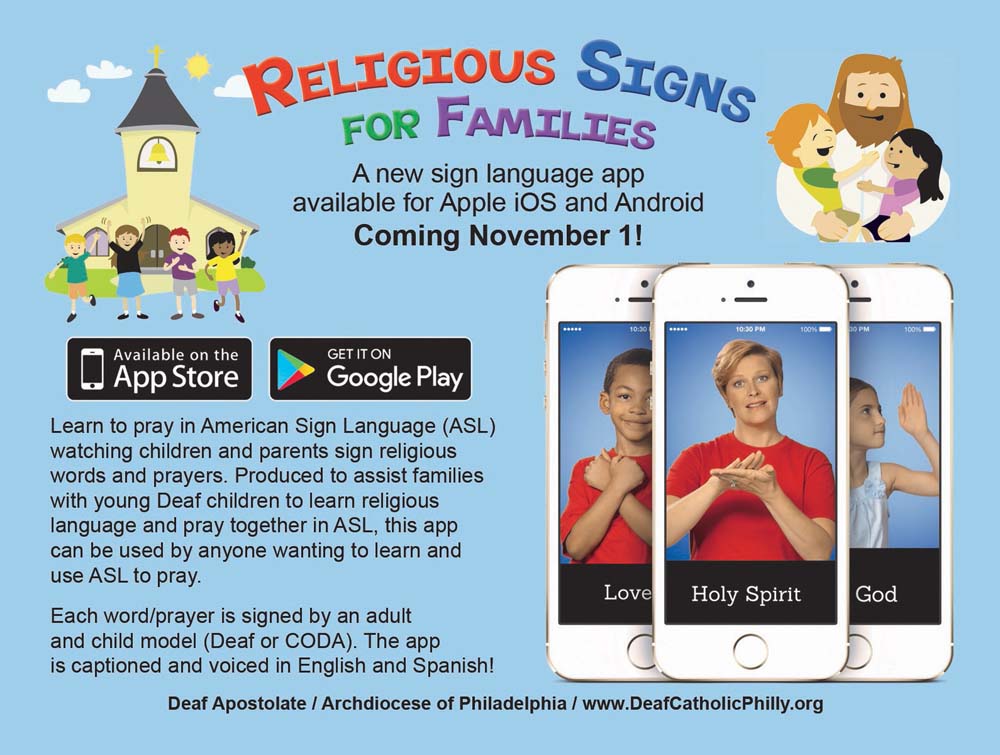 Publicity image for the Religious Signs for Families app to help deaf children and their family members learn prayers in American Sign Language. (CNS/Deaf Apostolate of Archdiocese of Philadelphia)

The two women who run that company are wonderful videographers, and they also love working with the Deaf community because it's just such a visual community to work with. It's not that easy to have really good, clear video of sign language because you don't want shadows, you want it to be easy to see and copy. And it sounds easy, but if I just pick up my iPhone, I'm not very good at capturing clear signs, but both Ann and Catherine from this company are.

I told them about this app that I was dreaming up, and they said, "We're game." It was really wonderful because unlike other projects, we were able to produce this with no money down because a few of the people — CANCAN, in particular, and some of their friends who are app makers — just wanted to be part of this project. Basically, they donated a lot of time. And then, if this is a success, we will then have the money to do the next one.

You saw something that was missing for deaf Christians and really honed in on filling that gap. Are there other ways in which faith life skews toward the ableist?

I'm happy you asked that. I don't like to speak for deaf people. "Audist" is the idea of someone who can speak and listen speaking for someone who's deaf and can't verbally speak — but the Deaf can convey and speak for themselves in sign language. I do like adults and children who are deaf to have their own voice.

But what I can speak on is the catechetical experiences that I have had with people who are deaf. It is really important that even a project that is being completed that will benefit the Deaf — that the Deaf are really a part of that.

And you might recognize that I'm using the term "the Deaf," and typically, when you're talking about disabilities, you'll say "a person with a disability." But one community that sort of goes against that politically correct phrasing is the Deaf community because they see themselves as a cultural community, particularly because they really cherish their language of sign language.

In this project, before it got very far, I brought together deaf adults who also are parents, and they were very much a part of the project. And they also happen to be real experts in child-rearing and early-childhood literacy and learning for deaf children. They're the ones who sort of dreamed about what they would like it to look like. And many of them are actually the models on the app. All the deaf adult models are deaf, all the children are either deaf or what we call CODAs: children of deaf adults. Their first language was sign language, not speaking English.

Deaf people, I think, would say that their experience of suppression or discrimination can be very similar to other cultural minorities.

Presidents Day takes place amid US struggles with division, identity

With Mary at the foot of the cross