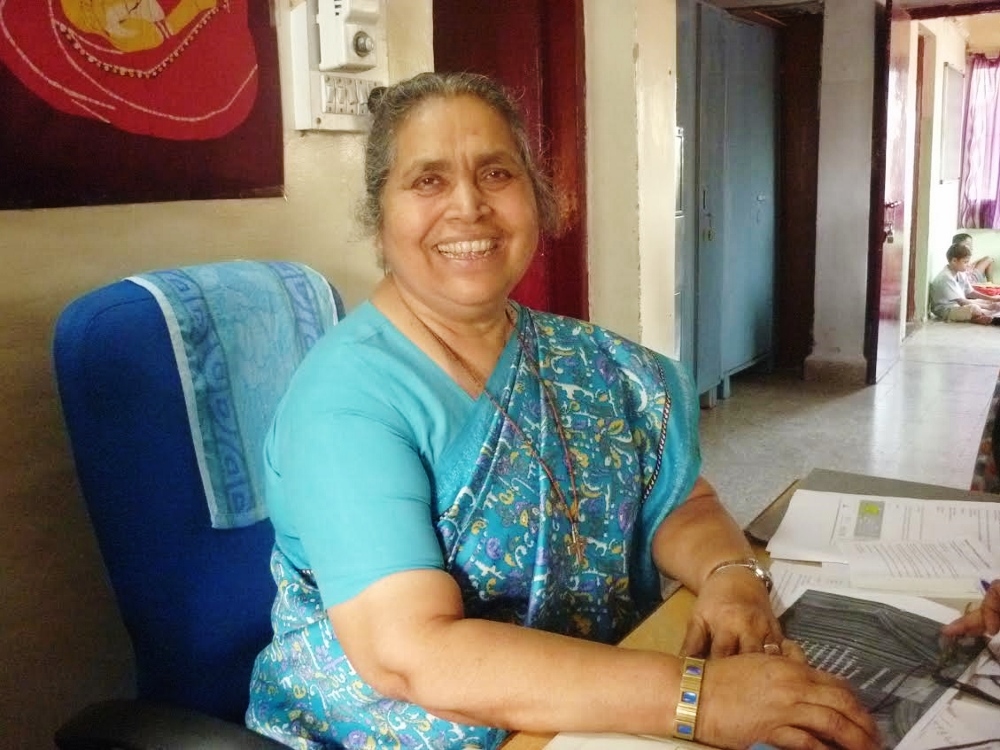 Sr. Lucy Kurien, member of the Holy Cross of Chavanod, is the founder of Mahar, a string of centers for people who live in poverty in India. (Lissy Maruthanakuzhy)

Pune, India — Sr. Lucy Kurien was the only Catholic among 20 women that the Indian government honored with the Nari Shakti Puraska, a women's empowerment award, on March 8, International Women's Day, for outstanding contribution to society.

The member of the Holy Cross of Chavanod is the founder of Maher ("My mother's home" in the Marathi language), a string of homes for people who live in poverty in various parts of India. Kurien says she believes serving others irrespective of caste or religion is the best way to show God's love for humans through Christ.

She shared with Global Sisters Report her journey from being a semiliterate young woman to a source of solace for hundreds of women, children and elderly who have no one to care for them.

GSR: Could you briefly introduce yourself?

Kurien: I was born into a middle-class agricultural family of nine children in Kannur [a district in the southern Indian state of Kerala]. After seventh grade, I could not continue my studies, as we had no high school nearby. It was then I met some Sisters of the Holy Cross of Chavanod, and my father agreed that I could go with them to Mumbai [about 700 miles north of Kannur] to continue my studies. In Mumbai, the sisters told me to study English for a year, as I knew only Malayalam, my mother tongue. Six years went by, and I never went to school. 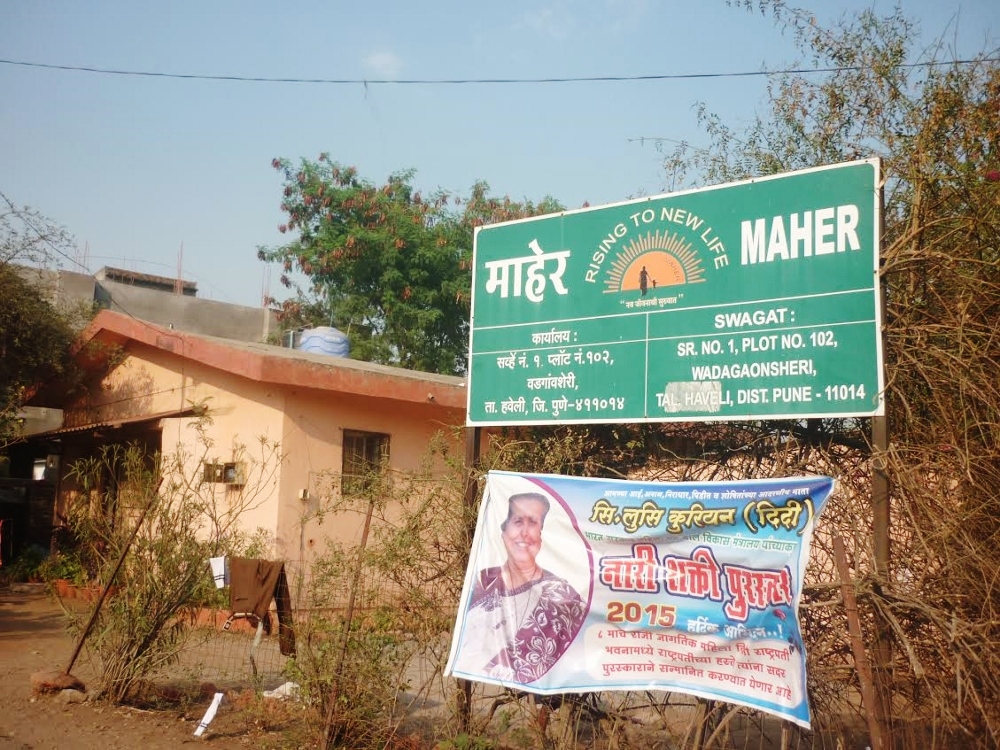 Entrance to the first Maher center in Pune, western India. A poster on the boundary fence congratulates Sr. Lucy Kurien for winning a national award for women (Lissy Maruthanakuzhy)

Tell us about how you became a sister.

After six years, the time came for me to choose my future. I had known that the Missionaries of Charity [founded by Mother Teresa] helped the poor, so I wanted to join them. I took their admission form home for my father to sign. There was a hue and cry at home. My parents said the Missionaries of Charity looked after the lepers, and it would be too hard for me. I might even die of that illness.

My two elder sisters were married by then, and my parents made arrangements for my marriage. They bought gold ornaments. But I told them to use them for my younger sister and allow me to become a nun. They agreed when I told them I would join the same congregation where I had spent the past six years.

When I told the sisters about my desire to join them, they readily admitted me. I was 20 then. After four years of initiation, I took my vows.

How did you enter social work?

As a junior sister, I was elected to participate in the congregation's provincial chapter, where we discussed the theme, 'option for the poor.' One of our sisters, Noeline, was managing Human Organisation for Pioneering in Education (HOPE), an institute for the poor. Her views about the poor and how to serve them appealed to me. I got my superior's permission and joined her two years later. She trained the poor and provided them jobs. This did not satisfy me. I wanted to serve the poorest of the poor.

One evening, a poor pregnant woman, a neighbor, came to our house seeking shelter for the night from her husband, who wanted to bring home another woman. Sister Noeline was not there, and we had no place. So I sent her back, promising to help her next day.

The same night, I heard a cry and ran out to see the same woman in flames. Her husband had doused her in kerosene and set her on fire. We took her to a hospital but could not save her. I requested the doctor if we could save the child. He brought me the charred little body.

How did you react?

I was devastated. I was restless. I was angry with myself and everyone else. My only thought was how to save these battered women living around me. I shared my anxiety with my spiritual director. He suggested that I do something for these women instead of fretting over them and getting angry.

I asked him what I could do since I was not educated. He said, 'You have love in your heart. That is enough.'

Believing the priest's words, I sought superiors for permission to help poor women. They gave me a green signal after six years. Meanwhile, I prepared myself reading the Bible. I wanted to live like Jesus, and for that, I had to know him more.

What did you do then?

My spiritual director, Jesuit Fr. Francis D'Sa, was a professor in Germany. Someone there told [D'Sa] that he  wanted to help some poor people in India. The priest connected him with me. The German met me in India and later sent me money. I bought a plot of land with that on the outskirts of Pune [a town in Maharashtra state]. With help from some others, I built a small house on that land. I had nothing else.

I started living there, and soon, two women with their children came to stay with me. I named it Maher to give the women a homely feel. My congregation supported me morally but not financially as it was a new venture. 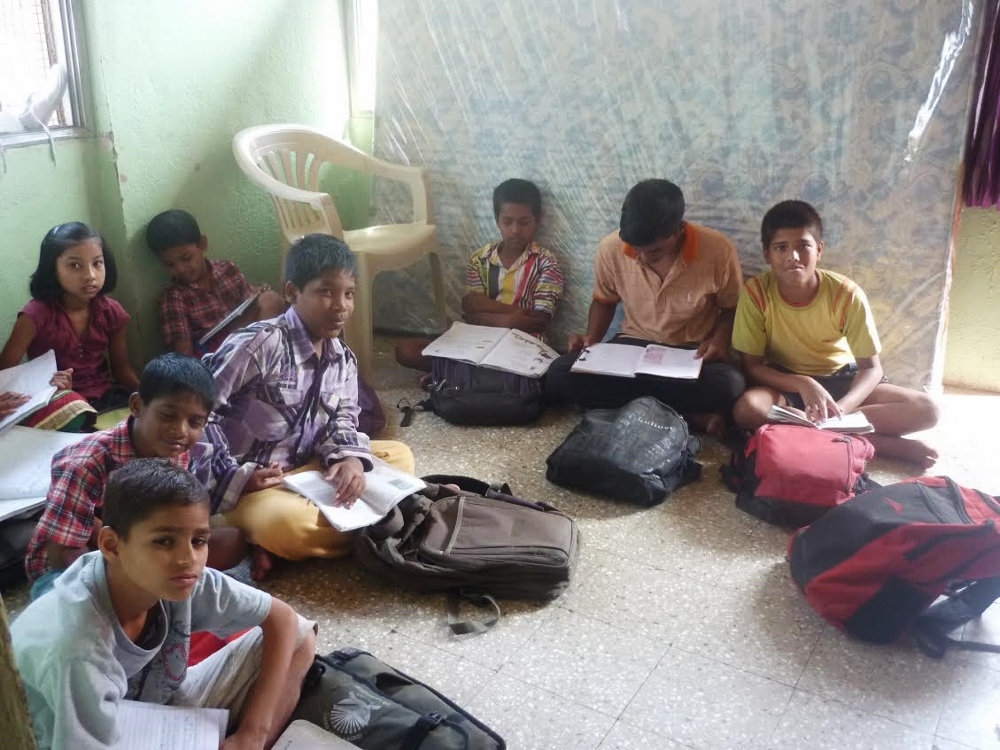 Students do homework at a Maher center in Pune, western India. (Lissy Maruthanakuzhy)

How did you manage to feed yourself and those with you?

We had no food. So I would go to the market and pick up discarded leaves and vegetables and bring them home to cook. I also collected grains that shops kept for birds. They would say, 'Pay one rupee and take it away.'

I was neither worried nor afraid in that dire situation. I trusted in the Lord. I believed the path I have chosen was God's will and God would take care of me.

Please tell us more about those days.

Once, my parents came to see me. When they saw my house, they started weeping. They were upset that I changed my religious dress for a lay dress. I told them what was important is not the dress, but my life. 'What dress did Jesus have?' I asked them.

As they were leaving, my parents gave me some money that I used to buy food for a few weeks. That was the beginning of God working through others. Visitors and friends who dropped in donated small amounts of money that kept us going. Some neighbors also brought things like one onion, one potato, as they were poor. Meanwhile, more women who knew me at HOPE came to our house. Some came with their children.

In the beginning, the neighbors were not friendly. I was a stranger for them. They would not accept me because I was a Christian. They spat at me many times. Buses would not stop for me because of my religion.

To bring them closer, I started nursery schools for children where the parents also would come. I welcomed them. Most of them were poor and non-Christians. I also went around visiting families to invite children to school. We also started some activities for village women.

When politicians came for votes, the women asked them what they had done for the villages. They then referred to me and said, 'Look at this woman who has come far to help us.' The politicians said I was there only to convert them. It took some time to remove the villagers' suspicion. I continued my visits and projects for them.

I kept a picture showing all religions at our entrance. This helped people to become free with me. Now they even call me to offer prayers during their feasts. 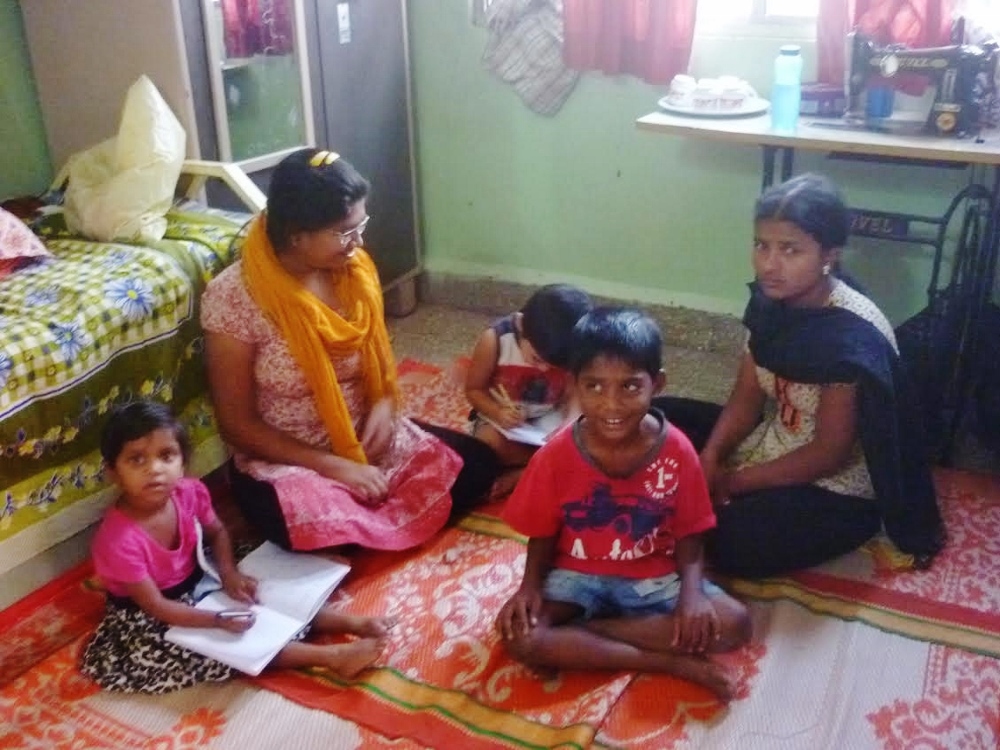 Now you have separate houses for children, elderly, handicapped, and unwed mothers. How did they all start?

I had another jolting experience. A 15-year-old girl, who was a topper [at the top of her class], did not turn up for class one day. On enquiry, I found out that she had committed suicide. She had become pregnant and killed herself by jumping into a well as she had dishonored her family.

We organized street plays and meetings to convince people to value life and women's dignity. I told the women that they could stay with me when everyone rejects them. Later, we married off some of those women.

What do you want to convey through Maher?

The spirit of Maher is to love, to give joy, to give life. That is what we teach the children here. We teach them not to look at anybody's past or religion.

I often tell my social workers that these children do not need food or a place to sleep. They can find food by either begging or stealing. They can sleep under trees or on sidewalks. What they need is love. We want to restore dignity in their life. 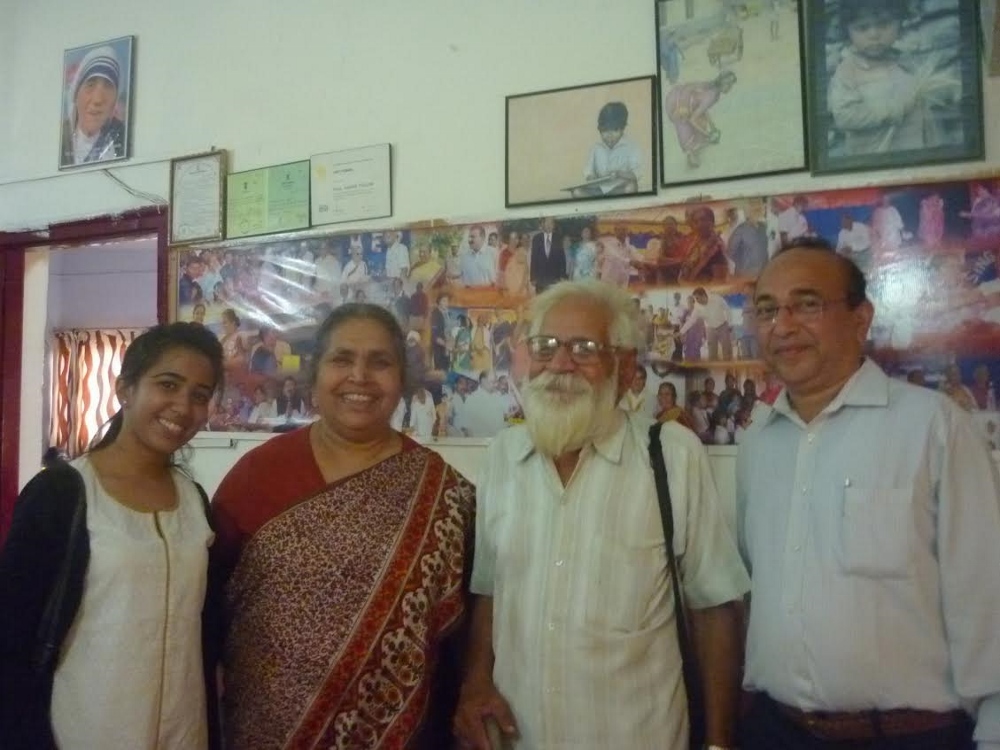 Sr. Lucy Kurien with friends who came to congratulate her on winning a national award for women. (Lissy Maruthanakuzhy)

How many have you reached until now?

Around 4,000 women have passed through Maher in the past 19 years. Now there are 862 children, 320 women, 56 men, 50 women in various houses. There are also HIV/AIDS-affected and their children.

What are the awards you have won? How have they helped your work?

Maher has received more than 65 awards. Before going to receive the awards, I kneel down and pray, 'Lord make me worthy of this award. Give me the strength to fulfill the expectation of the people.' I feel happy for the recognition. We have been offered 5 acres of land in Bijapur, Karnataka state, to serve the poor. We are also invited to Kolkata to start a branch of Maher there.

We use the award money to settle our people in marriage, find them jobs. We want them to find joy in life and bring them back to the family.

Ministry | Q & A with Lucy Kurien, providing shelter and love in India

Swimming lessons in rivers vital to save children from drowning

During past year of COVID-19 disruption, US sisters connected online, continued ministries