Q & A with Sr. Betsy Alunkal, nursing at a state hospital in India 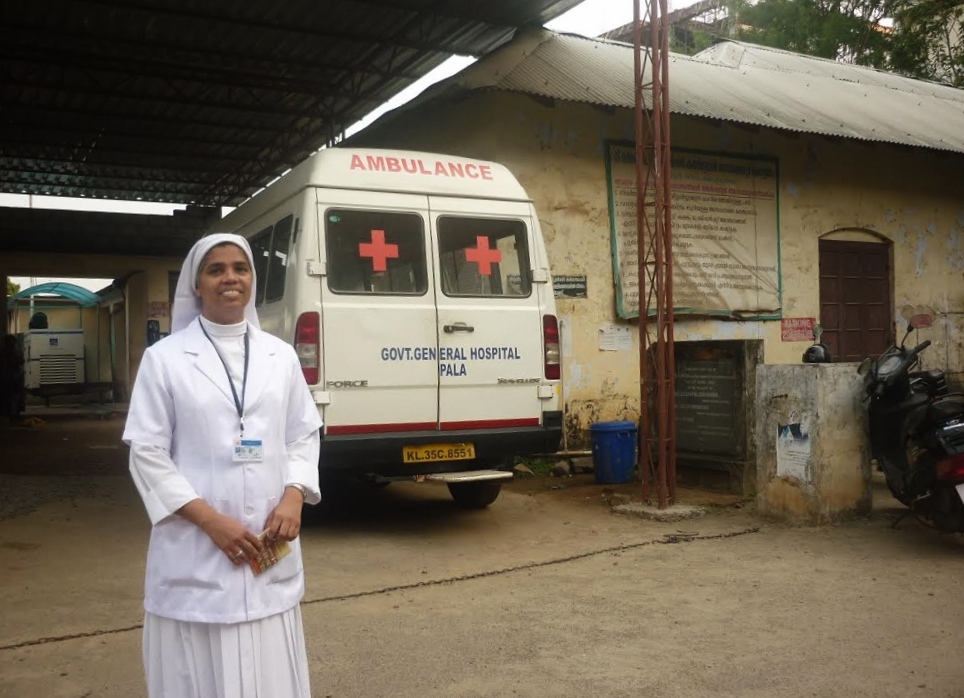 Sr. Betsy Alunkal prepares to go get a patient in an ambulance. (GSR photo / Lissy Maruthanakuzhy)

Palai, India — Catholic women religious working as nurses in government hospitals are a rare sight in India. An exception is Sr. Betsy Alunkal, who joined a government hospital in the southern Indian state of Kerala 10 years ago. Five years ago, the state government gave her the Best Nurses Award  for meritorious service.

Alunkal, 48, became a nurse 20 years ago. She is the only member from her congregation, the Sisters of the Adoration of the Blessed Sacrament, to work in a government hospital. She is a senior nurse in the government hospital in Palai, a predominantly Catholic town in the Kottayam district of Kerala.

She shared with Global Sisters Report why she chose to work in a government hospital and the challenges she has faced.

GSR: Generally, Catholic religious nurses work in their own hospitals and medical centers. Why did you choose to work in a government hospital?

Alunkal: During my nursing training, I got an opportunity to practice in the [government-managed] Kottayam Medical College for six weeks. During that period, I noticed that most patients, recognizing me as a Catholic nun, came to me for injections and medicine. They would say they felt no pain when a sister gave the injection. It was then I realized the precious calling of me as a religious nun. Many nuns work in their own institutes, but I have not of heard any patients waiting for a sister to give them medicine or injection. So the experience at medical college motivated me to work at least one year in a government hospital. However, I got the opportunity to work in a government hospital only after 10 years. I want to continue here for as many years as I can.

Was it easy to get a job in a government hospital? What were the formalities you had to go through?

Today it is difficult to get a job in a government hospital. Besides the minimum qualifications [general nursing and midwifery], one has to pass a written public service certificate test. Successful candidates have to undergo an interview. We get the job only if we pass the interview. I believe that God had a plan for me and he helped me pass all the tests at the first attempt.

Could you describe a typical day in the hospital and in the religious community?

It is a challenge to live each day. I am happy my religious community is very supportive of my service in the government hospital.

I believe my strength lies in the personal and communitarian prayer. I adjust my time for one-hour personal prayer each day before the Blessed Sacrament. My community is flexible that whenever I am free of morning hospital duty, I participate in the community prayer, meditation and Mass. Other times, I make sure I do not miss Mass, even if I have to miss my breakfast. I need to report for morning duty at 8, so before that, I participate in Mass. I do not wish to miss Mass even for a day.

Like any other staff in the hospital, I too work in shifts — morning, afternoon and night. I have requested the authorities to place me where more patients come, such as general, casualty or geriatric wards. I visit patients, giving them medicine, collecting blood for tests, changing bed sheets. After the rounds, I carry out new orders. I direct new patients to various departments. Other works include preparing charts and diet reports. My co-workers, doctors and nurses are very helpful, and we adjust our duties according to the needs. 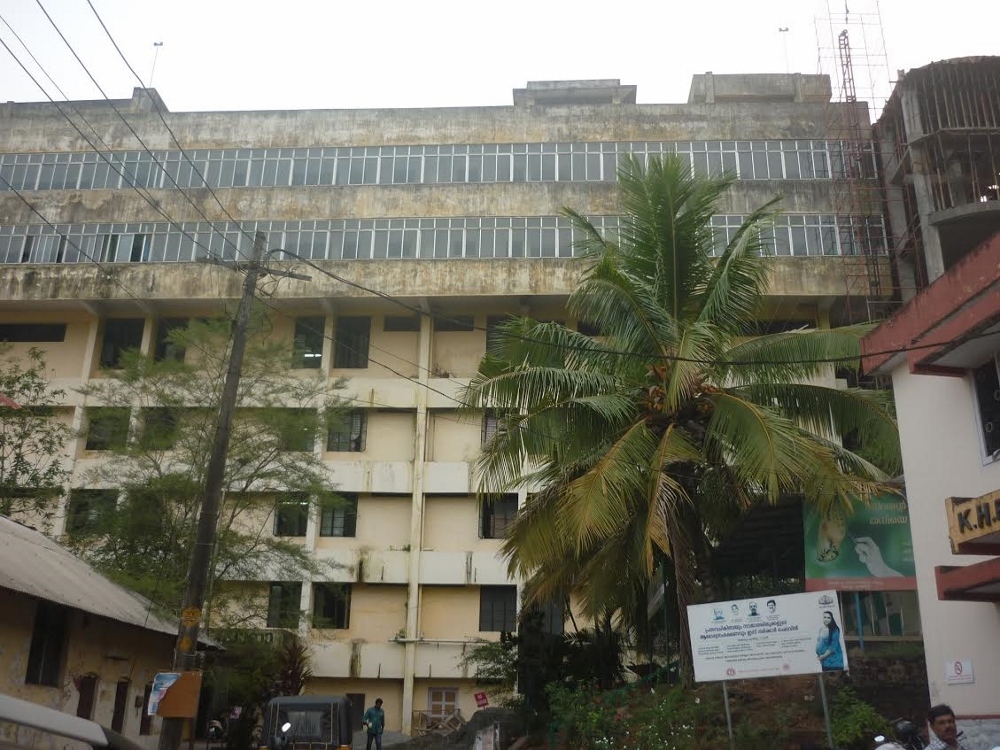 What are some of your happy moments and some challenges?

Last year, I had a touching experience while participating in a training program in Thiruvananthapuram [the capital of Kerala]. The assistant director of health services, who conducted the course, asked me if there were any other sister working in the Palai hospital. I said I was the only one. He then said he was waiting to see me.

He helped me recall an accident case our hospital treated one late evening some months ago. The victim was the director's father. His mother accompanied the father. He said his mother had told him how a Catholic nun consoled and comforted her at that time of pain and anxiety. He also said his parents could go home without delay because of my help. His mother also told him that only a religious sister would show such concern and love to a stranger.

'I am really proud of you, Sister,' he thanked me profusely.

Actually, I did not remember the incident. For me, it was routine — reaching out to those coming to the hospital, even at odd times. Moments of sickness are very painful and stressful for the relatives. Sometimes it is risky and challenging to go out of one's way to help others. But Christ has called me to follow him, taking risks and challenges. An opportunity to do service, to be kind comes to a person only once, and I want to grab it, especially in this Year of Mercy.

Patients are very happy to see a sister. They will come to talk to me and consult with me about their anxieties and difficulties. I experience their trust and confidence.

Challenges are enormous. In our institutes, we share the responsibility and we experience security. If any problem arises in our own hospital, our superiors are there to support us. There is none to support us in a government hospital.

At times, we are taken unawares. A young mother one day came for an abortion. She had another child, who was 2. I had already informed the hospital that I do not deal with such cases. Both the man and the woman were adamant to abort the child, who they feared had some abnormality. The woman was a victim of chikungunya [a virus spread by mosquitos].

We refused to do anything. We filled out the case sheet as required and referred them to another hospital, where both the mother and child died during the abortion. It became a police case. We were afraid whether the police would come to question us. The next day, the doctor told me the police had taken the photocopy of the case sheets and thanked me, saying, 'You had managed to fill in the case sheet with whatever information was available. That helped to ease the situation.' I heaved a sigh of relief. Other nurses said they banked on my little strength. My strength is doing everything to save people. God is my support.

In another case, a young woman was admitted for childbirth, but she did not have labor pains. We had no facility to conduct a cesarean section. So we sent her to another hospital. As the vehicle moved out, the baby came out halfway, and we did all we could before sending her to another hospital. At that time, a vigilante group came, shouting slogans and accusing us of patient neglect. They did not know the reality. I had to stand in the forefront to disperse the group. It was stressful, but I took it as part of my life. 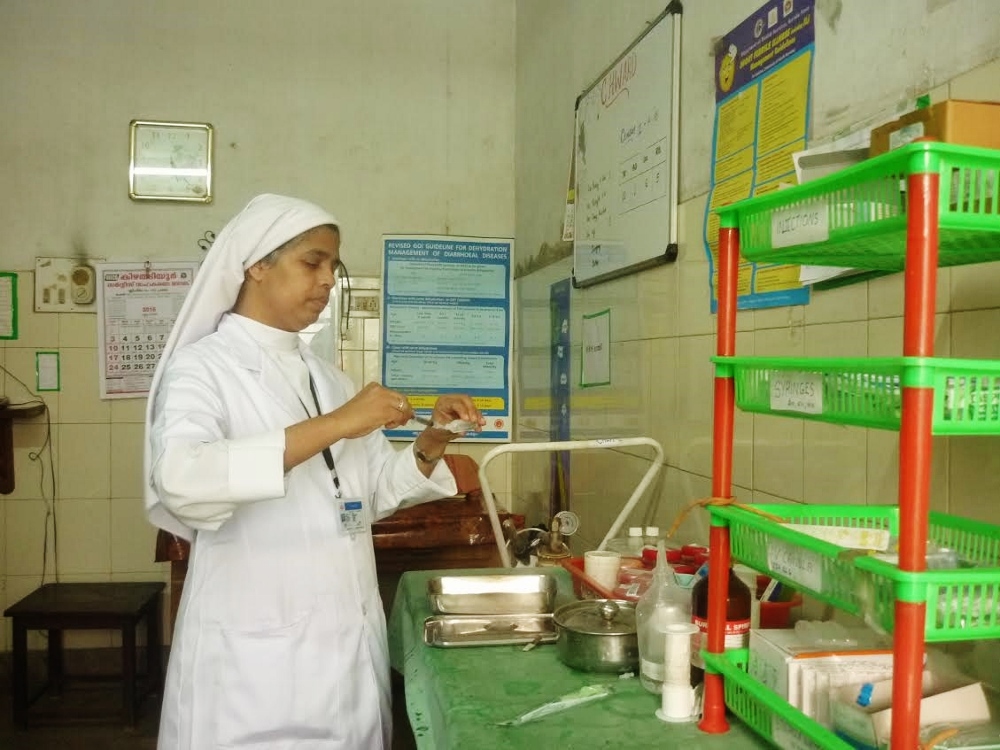 You won the award for being the best nurse in Kerala. How did the award help your work?

It was in 2011. I am not still sure if I was worthy of that honor. It reminds me of my responsibility to be self-sacrificing and service-oriented.

You previously worked in your own hospital. Can you compare the two workplaces?

We have support and security in hospitals run by religious, church or private companies. Our hospitals are clean and tidy and have all specialties. However, the patient has to pay for everything.

In a government hospital, we come in contact with the poorest of the poor, municipality, police and the like. We do not get this experience in church-run hospitals. Surgery that costs 40,000 rupees [U.S. $600] or so will be done here for a minimum rate. The patient has to pay only for some medicines. All medicines are made available here. In fact, people from other hospitals come here to get rare medicines.

We also offer palliative care to patients. We go to homes of bedridden patients to treat them for free. I have done a one-year training in palliative care and worked in this area for a year. I find going to families is a great service to the poor. We also offer wheelchairs, walkers, air beds and waterbeds to patients who require them after treatment here. They can return them after they are cured.

Such facilities are not provided by the private hospitals. Even for a cup of tea, we order it from outside.

In private hospitals, everything will be done on time, whereas in government hospitals, we have to wait for a doctor or a surgery, as there can be many patients in queue.

Here, it is very necessary that we keep clear records of everything. Sometimes we fail due to rush of patients in certain times. For pregnant women, all services are free from the time they approach the hospital until delivery. Food is given free to pregnant women. 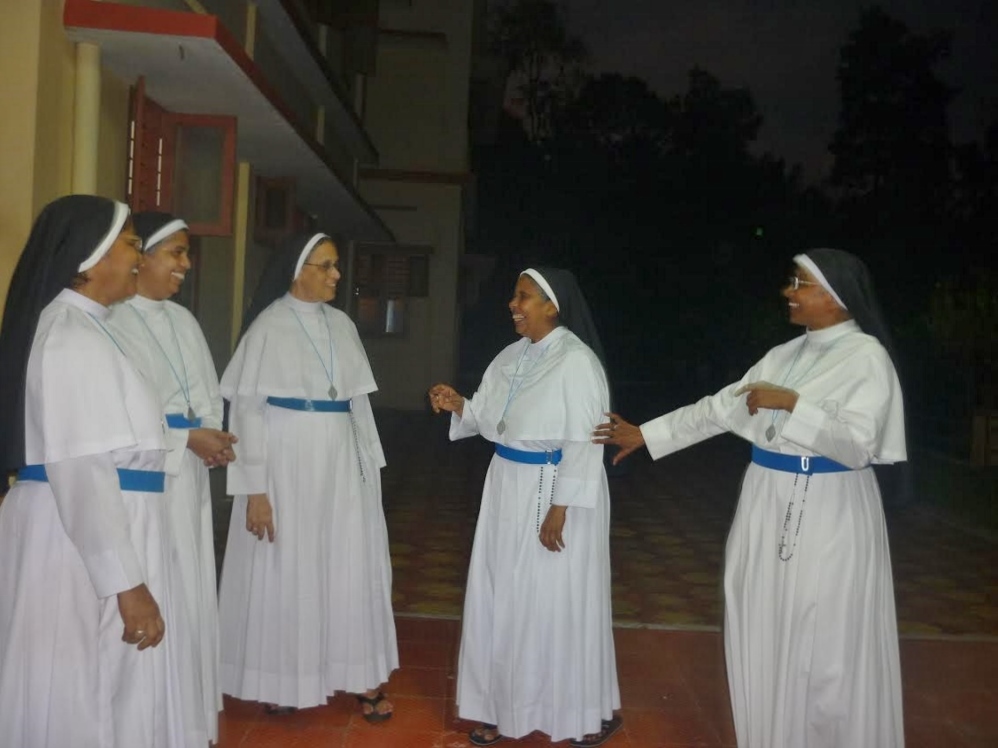 Who are the people who come to government hospitals?

Do people accept you as a religious? Do you find opportunities to speak of Christ?

All accept me. People come to me asking for prayers. They wait to meet me if I am busy. They come to me to get in touch with doctors and various departments when they are new to the place. Sometimes, when there is a specific need, I request the doctors' help, too, which they willingly accept. Sometimes, someone will come asking to administer insulin when I am leaving for home after duty, sometimes after 14 hours. I do it for them, however tired I am. I will not make anyone wait or send them away because I have to go.

Do you face any conflict between your job and your status as a religious?

I am helped by the hospital as well as my congregation. We arrange our duties to help one another, sometimes even by doing double duty. For our religious festivals, too, we help one another so as to have a celebration in our respective houses with family and community members.

What is your message for the young religious aspiring to work in a government hospital?

The poor people who come to you here will remember all that you do for them if you are dedicated.

Ministry | Q & A with Sr. Betsy Alunkal, nursing at a state hospital in India