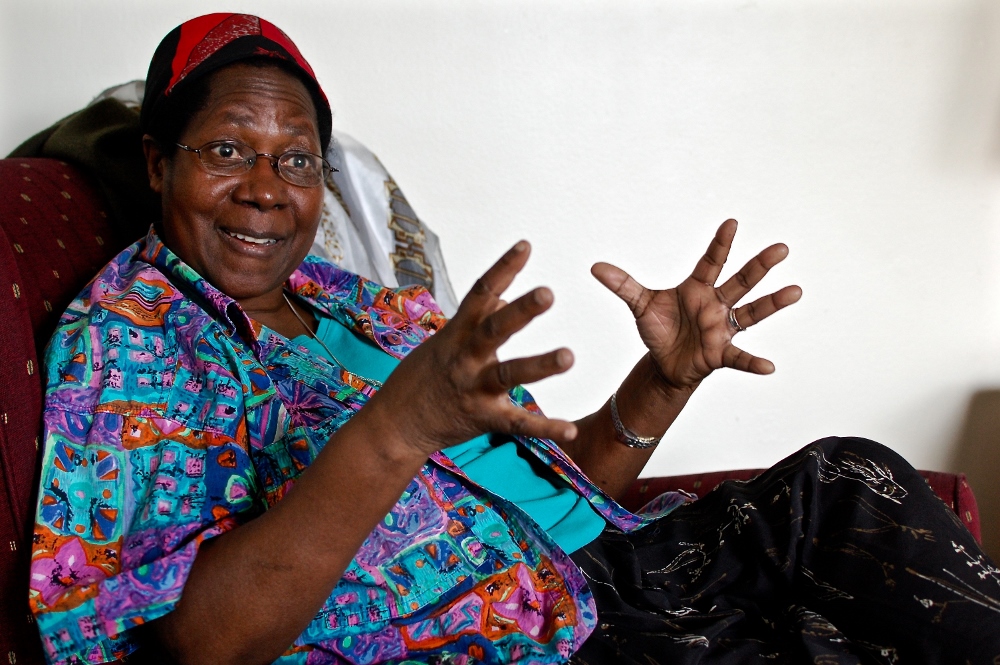 Society of the Sacred Heart Sr. Betty Nakyanzi is a student at Catholic Theological Union in Chicago. (Dan Stockman)

When Society of the Sacred Heart Sr. Betty Nakyanzi left her native Uganda to get a master’s degree in Intercultural Ministry in the United States, she knew it would be a challenge. But she never imagined it would result in her – even temporarily – being in a wheelchair.

But the experience has also given her deeper insight into what so many people go through, and a new appreciation for those who help others. She is a student at Catholic Theological Union in Chicago, and doing a practicum at the Marie Joseph House for Families on the CTU campus, a project of the Interfaith Committee for Detained Immigrants. The hospitality house is home to about a dozen people either waiting for final permission to stay in the United States or who do have permission and are learning how to live here.

So what happened to your leg? And what did you learn from it?

In December I fell and broke my leg. That put me in a wheelchair until March. Then I was using a walker, then a stick [cane]. Now I’m in therapy two times a week. It has been hard with the studies – I think it is God’s grace that I’m going to finish. And I have to finish on time, because I only have a 15-month visa. But that’s the good thing I discovered about CTU – the people are so kind. Students would come and bring me to school and back home when I was done.

But it is so hard to depend on people. There are certain things you want as a person, but because of depending on people, you don’t get them the way you wanted. But this helps me understand when the clients here [at the hospitality house] get frustrated. Usually they don’t – they are very, very grateful, and thanking God for what he is doing for them. They were homeless and here they are provided everything. But I also understand better what it is like for them to have to depend on people.

It seems that you would also have an understanding of what it is to be in a vastly different culture, far from home and the things that you know.

Yes, I was going to do my practicum in a hospital. But when I broke my leg and was in a wheelchair, they said, ‘This isn’t going to work.’ But when I came to an open house here [at the hospitality house], the clients immediately felt I was one of them. I just sat with them. For my studies, I have to write a paper every week on the images of God I saw in that week, and I see him all the time here. I’m thanking God for giving me this opportunity.

I never dreamed that one day I would go to America. You can’t imagine an African thinking of going abroad – it’s something that only comes as a miracle of God. But not every miracle is easy to accept. I lost my brother; he died on January 28 of last year – I came here February 4. He left behind six children, and I could not be there to help.

Hearing you talk about the clients at the hospitality house, it seems that you get as much back from them as you give yourself.

I am inspired by them. Some of them have Bibles in their mother tongue – that they could lose everything, but keep their Bible struck me. They have deep faith in God. For some of them, it’s like Exodus – they feel they are on a pilgrimage, and they see all these different sisters of different congregations, all working together to help them. In Uganda, I was a novice mistress for four years, where I worked in formation with the novices, so I’m used to working with people of different backgrounds, and letting them speak and give their stories.

These people left everything behind, but they feel they are chosen people. They have that image of God that he has chosen them in a special way to be treated like this. It has been excellent work.

Pops' way of life leveled the field, made us better