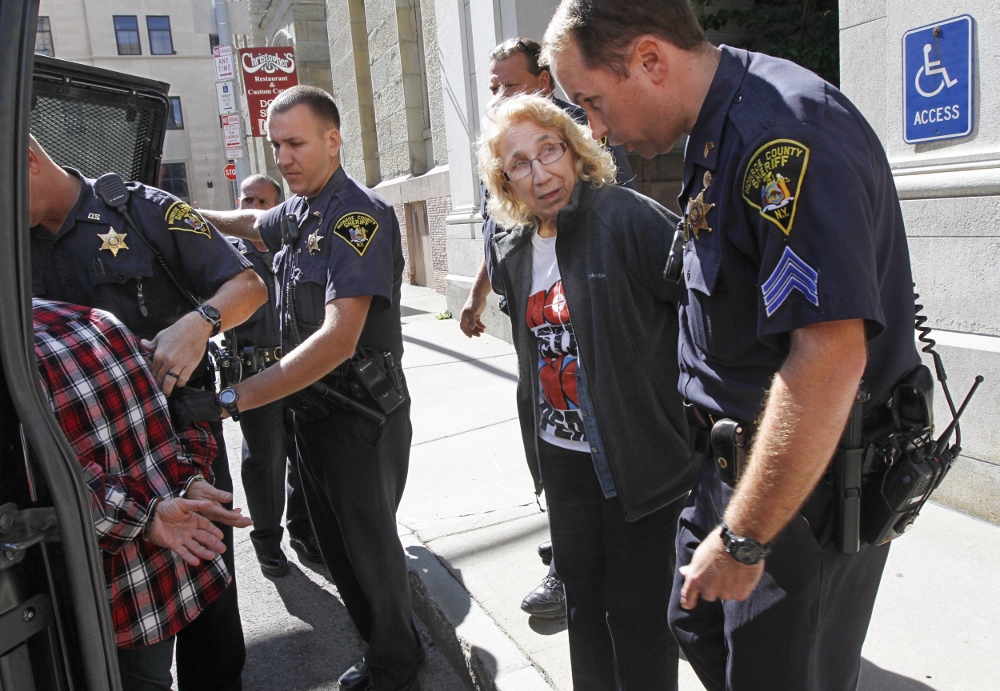 Sr. Grace Miller is escorted into custody by Monroe County sheriffs after being arrested for trespassing in the county building Sept. 15. (Courtesy of Rochester Democrat & Chronicle / photo by Shawn Dowd)

Rochester, N.Y. — Grace Miller, a Sister of Mercy in Rochester, New York, never intended to run a homeless shelter and be a tireless advocate for those with nowhere to go. But on Oct. 1, she’ll celebrate 29 years of doing exactly that. Two weeks later, she’ll be in court to explain why she is charged with third-degree criminal trespass.

The charge stems from her arrest Sept. 15 in Rochester’s Monroe County Office Building, where Miller and about 30 other protesters were attempting to meet with county officials over their decision to lock the homeless out of a county garage, despite what advocates say is a lack of available shelter. After appearing in court the next day, Miller was released on $250 bond.

How did you end up in handcuffs?

The New York State Constitution’s Article 17 says the state is responsible for the poor, through the county. They have a legal mandate to care for the poor. But the county doesn’t have enough shelters, and so many homeless were sleeping in the civic center garage downtown.

The county wanted last fall to kick them out, but we were successful in holding them off last November, again in January and in April. We kept saying, ‘Don’t put them out until we have a building for them.’

We were looking for a building, but city zoning laws make it difficult to place a shelter. It’s actually the county’s job, but I was asked by Rochester’s mayor to lead the search for a building, and I said I would. But it’s difficult. We thought we had more time, but then when I was on retreat in August, I got word they were evicting them, so I left the retreat and came back. The night they put them out, we were in the garage protesting, but they wouldn’t arrest us because they didn’t want the bad publicity. Where are those 30 people going to go? Now they’re sleeping on benches or in parks.

We organized, protested and we asked Monroe County Executive Maggie Brooks for a meeting, it was scheduled for Sept. 9. Then a few days before, it was canceled, because they said they’re proud of the work they’re doing with the homeless. So we protested Sept. 12, saying we wanted the meeting rescheduled. They told us Maggie Brooks wasn’t there, so we came back Sept. 15 and protested.

They wouldn’t open the doors or anything, so we were chanting, ‘The homeless have their rights.’ Maggie Brooks never came out. Some of us went up to the fourth floor, and then the police came and said we were welcome to protest on the first floor, but we couldn’t go to other parts of the building. So we went back down, and then three of us left the protest to go to the second floor where the Department of Human Services is and went in there and asked for a meeting. We were sitting there waiting, then the police came in and said we’d have to leave or be arrested. I said, ‘I’m not leaving.’

Because I was arrested at the County Building, I’m not supposed to go back there until this is all over, but the judge did tell me I can go there for any kind of business I have there, including the monthly public forum, so I plan to go to that and talk about the homeless. The judge knows me [laughter]. I wonder why he knows me [more laughter]?

If the county is responsible for caring for the homeless, where do you and the House of Mercy come in?

There's not enough space at the county shelters, and they have all these rules, so people are refused entry. You have to have identification; you can’t have a drinking or drug problem. They won’t take people with mental illness. If you get there too late, you can’t get in. I don’t know how you can put a homeless person out on the street – especially when it’s cold – and sleep at night. At the House of Mercy, any time a homeless person comes in, we welcome them.

These people in the Civic Center Garage, we had medical students that would come in and help them, doctors would come and take care of them. Churches and volunteers would bring them food and care packages. Now they’re scattered all over, how can you even find them to help?

You didn’t get started helping the homeless until you were 50 years old. How did that happen?

I was supposed to go to Nicaragua! Obviously that didn’t pan out . . . . But while I was waiting to be called, I went to a homeless shelter to help out and found that I really liked working with the homeless. But at 6 a.m. every morning, everyone had to get out, and it bothered me to put people out at 6 a.m. on a cold morning. Where were they supposed to go? Then when Nicaragua didn’t work out, I just keep doing it. But on these cold winter nights [the average high temperature in January in Rochester is just 32°F; the average low is 18°F], I would drive around and see homeless and pick them up and take them to the shelter.

One very cold winter night, when there was heavy, deep snow, I saw this man in the inner city, and I thought, ‘He’s going to freeze to death.’ I picked him up and then found two others. There were three churches that had opened their basements for the homeless, but when I took them there, they were refused because they were full.

Finally, I said, ‘I’m not leaving until you take them in.’ That night, all I could think of was, ‘There’s no room at the inn . . . ’ I knew there had to be a place that was open 24 hours and would take anyone. So I proposed it to the Sisters of Mercy and they approved it. The first month we served over 600 people and it’s grown ever since. Today, over 4,000 people a month are coming to us for help.

Yes, we help people get into apartments, we help people with emergency utility shut-offs. We help them get jobs so they have income and aren’t homeless, we get them into job training so they can get jobs. One of the things that shocked me when I opened House of Mercy is we were burying people. In three months, we had 25 funerals – people were dying from impoverishment. So we began providing Christian, dignified burials for people. The county will pay $1,250 toward expenses for an indigent person, but that will only cover cremation; if a poor person wants a burial, it’s almost $3,000, and many of our people don’t believe in cremation.

It’s prayer. It’s God. You’ve seen all the writings from Pope Francis, ‘Help the poor’ – I’m thrilled with what he’s saying. He said, ‘The church should be like a House of Mercy,’ I’m going to have that put up on our wall. Look at Scripture – where was Jesus? He was with the poor. He went where they were, he went where no one else dared to go. I read a lot of liberation theology, and I feel like we’re living out the Gospel. In Luke 4, Jesus says, ‘I have come to bring good news to the poor.’ That’s why we’re here, to bring good news to the poor.

Q & A with Sr. Amy Hereford, reaching out to those called to religious life