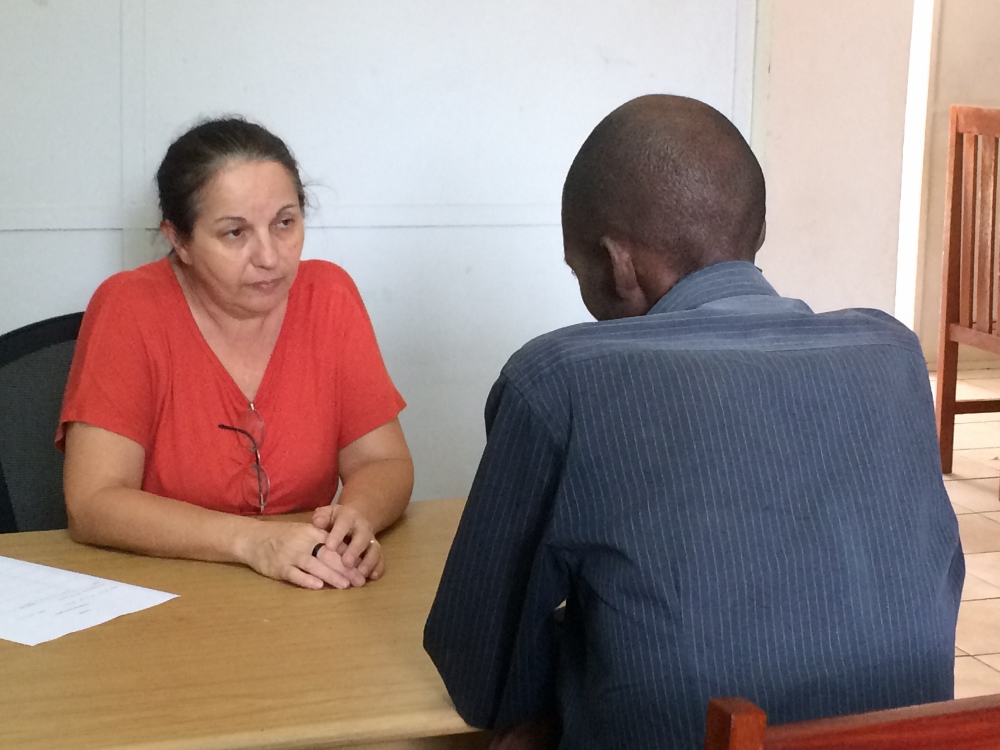 Sr. Leonir de Fátima Fabris gives psychosocial support to a man living with HIV. "Men often have more difficulties to talk about their sentiments. They might seem normal from the outside, but inside they might be suffering a lot," she said. (GSR photo / Matan Rosenstrauch)

Maputo, Mozambique — People living with HIV/AIDS often have shame and guilt in addition to their medical problems. This can pose challenges for medical professionals and religious leaders who work with people with HIV/AIDS.

Sr. Leonir de Fátima Fabris is a Sister of the Immaculate Heart of Mary who is originally from Brazil. She is a psychologist, a nurse and a naturopath. In the past three years, she has been working in the Hakumana center in Maputo, Mozambique.

In Mozambique, 11.5 percent of the population lives with HIV/AIDS. Many other countries in the Southern Africa region have adult HIV prevalence rates of over 10 percent. The number of people living with HIV/AIDS is even higher in Maputo and the southern provinces, reaching almost 20 percent.

The Hakumana center's work with people living with HIV/AIDS is inspired by the spirit of the Good Samaritan, a person who gives love and compassion independent of beliefs or cultural origin. While material assistance, such as antiretroviral treatment, is important, the Hakumana center also promotes social integration and treating patients with dignity. In Changana, the native language of Maputo, Hakumana means "take care of them."

GSR: How did you start working with people living with HIV in the Hakumana center?

Fabris: Back in Brazil, where I am from, I already worked with people living with HIV, both as a nurse and as a psychologist, in impoverished urban communities. When I was asked to come to Mozambique, I came for missionary work, but also I was looking at the most urgent needs. I already knew about the reality of high HIV/AIDS prevalence here.

When I first came, Hakumana had no functioning psychologist. I hesitated to start because I had to know the culture before starting. Taking the plunge and starting this work was nevertheless gratifying. People were telling me how much they needed orientation and advice or simply someone to listen to. Sometimes, they are trapped in beliefs of witchcraft.

How does belief in witchcraft affect people with HIV/AIDS, and how does that overlap with Christianity?

The Christianity here is different then what I knew [in Brazil] because of the local traditional beliefs. If someone believes he became HIV-positive because he was bewitched, it is very difficult to make that person believe differently. Sometimes, it takes even a year for someone to realize that the virus isn't a result of witchcraft.

In most cases, this has to do with polygamy. Formal polygamy ranges between 12 to 18 percent of all household units in Mozambique. When a woman gets an HIV-positive diagnosis, she may try to blame a disliked family member, usually one of her husband's other wives.

Or, if she says she was bewitched, they call the family chief, or the Curandeiro [traditional healer], to decide which treatment has to be taken. Sometimes the treatment involves small cuts in the skin that leave scars.

Even if my patient is afraid of this ritual, there's too much social pressure to resist. In some cases, I intervened, saying my patient could not go [to one of the traditional healing sessions] because she had to adhere to a treatment for the antiretroviral drugs. 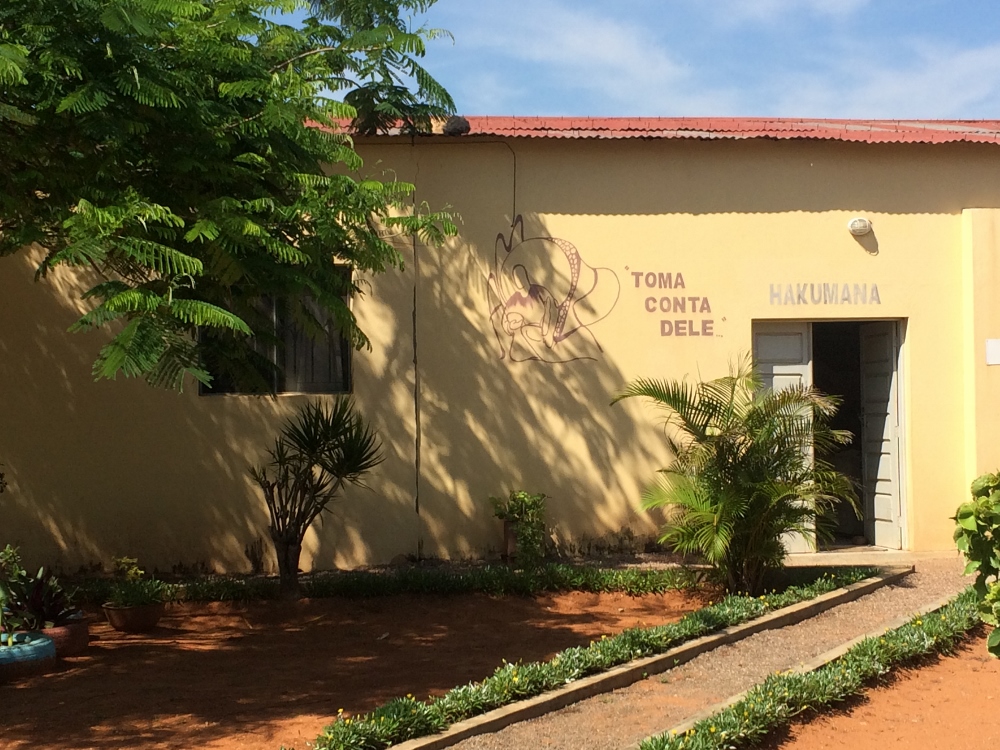 I had cases of women who lost their husbands due to AIDS. In that case, the woman is obligated to maintain sexual intercourse with her husband's brother, and it has to be unprotected. This ritual, which is called 'widow cleansing,' has both emotional and health-related consequences.

The family is very strong in the sense that not complying with those social expectations results in harsh consequences for the whole family.

When it comes to counseling about using condoms, I do so, although some Catholic sisters see this issue morally problematic. It is important to remember that condoms, as other contraceptive methods, do not offer 100 percent protection. It isn't worthy to advise [sexually active] people to abstain from sex — they won't do that. If we have to choose between giving false advice or correct protection, always go for the latter. When it comes to HIV, we cannot bury our heads in the sand.

What inspires your work with people living with HIV/AIDS?

Adhering to the treatment is a daily reminder of my patients about their life with HIV. Therefore, it is crucial to rebuild their self-esteem. We have to do this naturally. We teach them to say, 'I am sick, but I'm not invalid.'

I have a case of an HIV-positive woman who continues to have unprotected sex with her sexual partners. It's been four months since she has discovered her HIV-positive status, and she is still in denial. 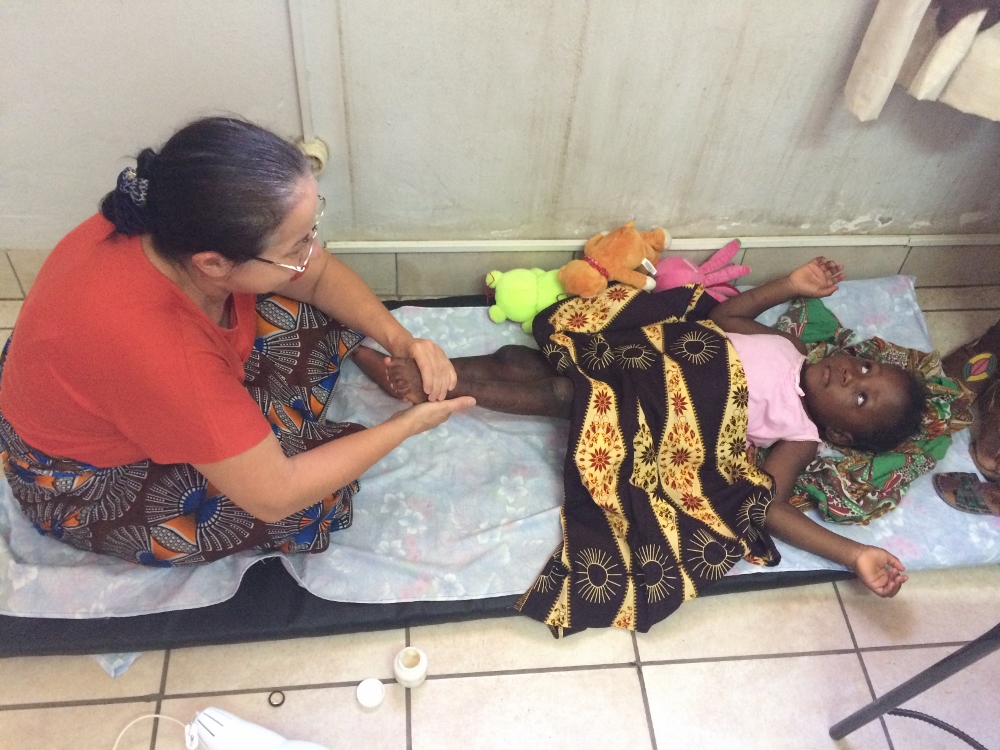 Yet we must remember: Denying is not lying. In psychology, denying means not believing or realizing what is happening to you. The truth remains truth, until one finds out it is not. I help my patients realize when it is not, which means to accept themselves and admit they live with HIV.

Men often have more difficulties to talk about their sentiments. They might seem normal from the outside, but inside they might be suffering a lot, and they don't say it. This makes them have more problems with their adherence to the antiretroviral treatment.

What we give in Hakumana center is very different than the minimal attention Mozambican people who live with HIV receive in the public clinics. Here, we give personalized care, observing all aspects: nutrition, physical and psychological health. We take care of him or her, as the meaning of the word Hakumana ['take care of them'].

Here, we help the people feel blessed and welcome. We aren't doing this by any religious propaganda, but by work. This is the best propaganda: to have a life of quality and value, to practice his or her religion and to assume Jesus' will.

As I believe, religion is a means to reach God. We are educators for faith, but also for better life conditions. The science and the psychology are tools that I use to help people 'live life in all its fullness.'

This is my motto, the words Jesus said: 'I have come that they may have life, and have it in all its fullness.'

[Matan Rosenstrauch is from Israel and lives in Maputo, Mozambique, as part of his studies at the Hebrew University of Jerusalem in Israel.]

Ministry | Q & A with Sr. Leonir de Fátima Fabris, giving psychosocial support to those with HIV/AIDS

We are displaced people; we wonder what is next