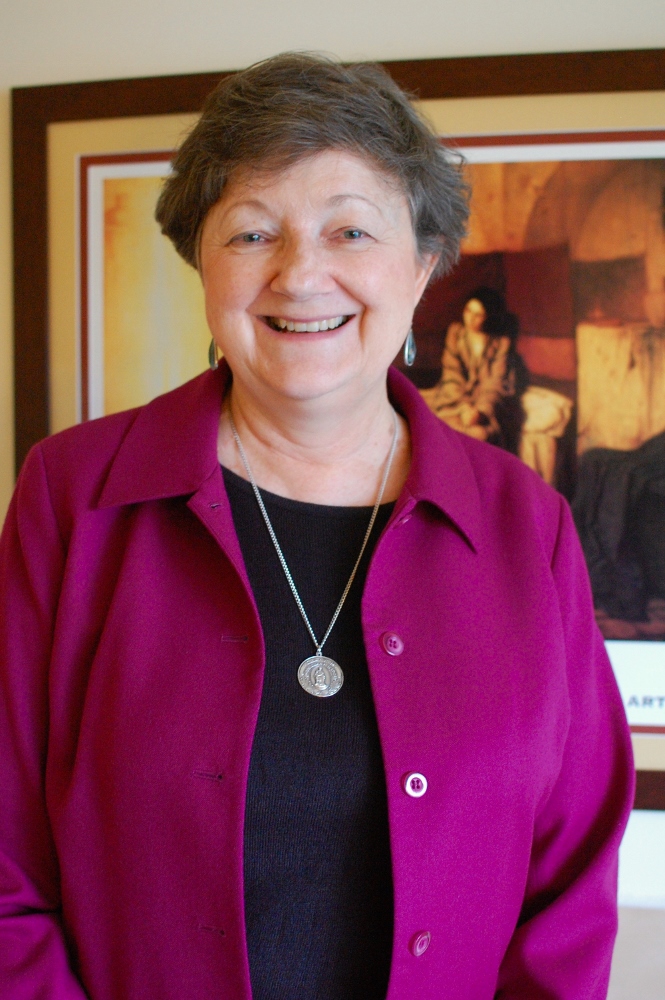 Sr. Mary Jo Nelson's smile is infectious and, despite a rigorous travel schedule, so is her energy. In most normal circumstances, she'd be considering retirement, but like most women religious, the Our Lady of Victory Missionary sister feels like she's just hitting her stride.

What she can do now is facilitate. She helps communities and leadership teams, especially during Chapter meetings, in which a religious community examines its goals and focus and elects leaders. Canon law requires Chapter meetings to be held every certain number of years.

In recent years, communities have been dealing with very large questions, such as letting go of capital assets that are no longer needed, providing health care to aging members and sometimes even transitioning out of existence — all of which have aspects that go far beyond just the business side of running an institute. And that, Nelson said, is where she can be most helpful.

GSR: How did you get started in this work?

Nelson: I went back to school in the late 1980s to get a degree in organizational development. I already had two degrees in theology, so I went with something more practical. I worked in several positions in the diocese of San Bernardino, California, then I was elected to leadership, so I moved back here [to Huntington, Indiana].

Being in leadership got me involved in the Leadership Conference of Women Religious; in 2012, I was a co-facilitator for the LCWR annual assembly in St. Louis, the first assembly after the Congregation for the Doctrine of the Faith announced its doctrinal assessment and mandates for reform. It was such a privilege to serve LCWR in that way.

After that, a community called and asked if I would facilitate their Chapter meeting, and it's just grown from there. It's all been word of mouth. I don't have a website and only got business cards last year.

Many years ago, communities would do all sorts of processes to generate an agenda; now, most of those decisions have already been made when you have it — most groups are already dealing with property, health care, the future of the community and buildings. One community, they had been doing all this work for the last four years, so I said, 'I don't think you need an agenda just to have an agenda. So instead, let's focus on all the transitions the decisions you've made will require, and how to be with the change.' Things are changing very fast, and these changes are so difficult. You're not planning for ministry, for the most part. You're planning for health care and for buildings that are bigger than you need. It's very much a spiritual journey.

One of the images I use for a Chapter is the community being on retreat, in a sense. You step back, you look back and you look ahead. On a retreat, you assess where you are in your life with God and with others — it's the same for a community. It's not just a business meeting, it's a meeting filled with contemplation, faith sharing, contemplative dialogue — an effort to really hear each person and her contribution in a different way. That reflection time is so important because it's about our life. It's not just about the business of the corporation.

Does that dialogue extend beyond the meetings?

One idea I share and really believe in is that members and leaders need to be in a partnership with each other. There have to be ways to tap the wisdom and experience of sisters who are not in elected leadership. Whether they're younger sisters or older sisters, you need to be involving them to the degree they can be engaged.

The leadership pool is shrinking [because of the rising age of sisters and fewer young sisters joining communities], but that's the gift of a smaller pool of leadership — it has to be that way, you have to tap that wisdom of the membership. It takes more time because it involves more people, but for any topic in life, you should be asking, 'Who else needs to be in the conversation?' As communities get smaller — some are down to 25 or 30 sisters — their whole governance is the entire community, and when you're that small, if you're not talking to everyone, you're in big trouble.

The old model of a big, top-down leadership made sense when you had these big numbers of sisters. But now it's so different. It's calling us to be more collaborative.

How does a community deal with numbers declining so much that they see the end coming? Is there anything you can do to help them through the process?

Religious life is a life before it's an institution. So even though the institutions around us are changing, it's a chance to deepen our lives. It's the whole journey of trying to live in the unknowns, not just for ourselves; everybody is dealing with that in some way. That's part of our gift: It's not going to be about doing a project, it's going to be about how can I shift my view of things, how can I deepen my spirituality so I can be a presence, a resource and a source of life for others who are struggling with the complexities of life, loss and death? Those aren't simple answers. It's shifting it from 'What's happening to me in all these changes?' to 'What can I learn so I can give it to someone else?'

As some communities work toward completion, one of the most wonderful gifts we can give the church and the world is how to die gracefully. We live in a culture so afraid of death and that resists it at every turn. I think that's something we're called to. It's not everything we're called to, but it's part of it.