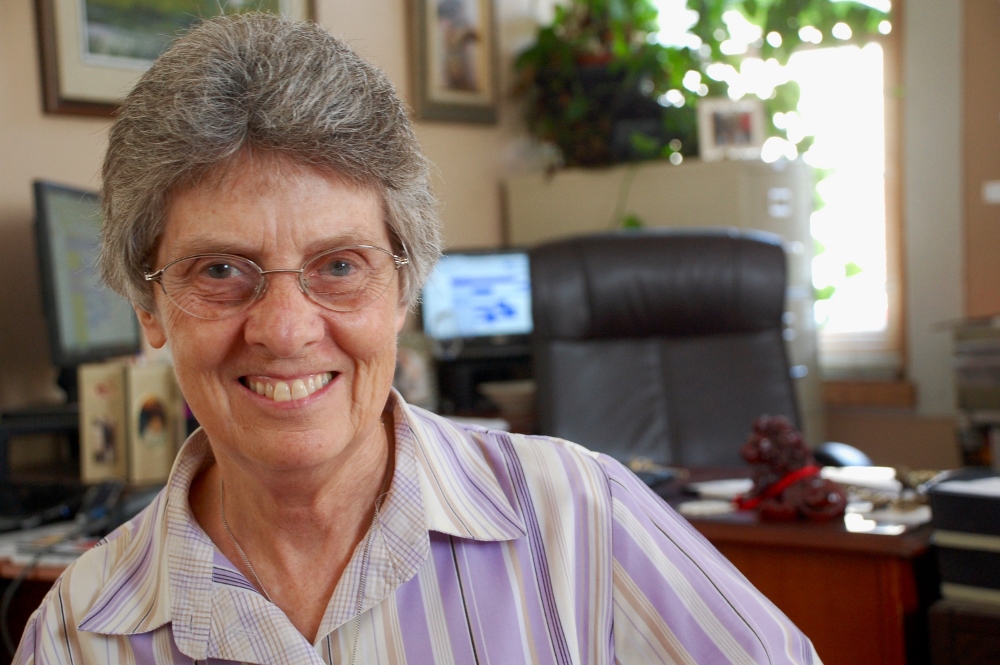 Sr. Mary Joseph Ritter is general superior of the Sisters of Charity of Our Lady of Mercy in Charleston, S.C. (GSR photo / Dan Stockman)

Sr. Mary Joseph Ritter, general superior of the Sisters of Charity of Our Lady of Mercy in Charleston, S.C., always wanted to be involved in a ministry of direct service. But in her more than 50 years of religious life, she's learned not only the power of serving others, but the increased power that comes from forming partnerships to serve others.

When Ritter entered the Our Lady of Mercy community in 1960, things were much different. The community was near its peak of 110 members, and there were plenty of hands available for whatever work was needed. There were schools, a hospital and a nursing home to run.

Today, there are only 14 members, but the transfer of assets has let the sisters move into different ministries where, by partnering with others, they can be just as, if not more, effective than ever.

The congregation sponsors a nonprofit, Our Lady of Mercy Community Outreach. The agency has a $2.7 million operating budget and serves more than 11,000 people a year with a soup kitchen, health clinics, food pantries and education efforts.

GSR: How important are the partnerships to the success of what the sisters are doing in Charleston?

Ritter: Here's an example: The diocese of Charleston ran Neighborhood House [an outreach center in Charleston that serves the homeless with a soup kitchen, food pantry and other services], but was having trouble keeping it going, so we took it over in 2005. The diocese leases us the basement of a former Catholic parish and the house next door. The rest of the church building is leased to a church from another denomination.

We have sisters from other communities that volunteer here, we have an AmeriCorps volunteer, and we have students from a nearby Catholic university that help us with a food market. We have medical technicians and emergency-room nurses that do wellness outreach to homeless camps in the area, and nurses that volunteer in our wellness center on St. John's Island. We have a dental clinic and we do prenatal care because South Carolina has one of the lowest average birth weights in the country. It would be simply impossible to do this with just 14 sisters.

How do you coordinate all that? It seems like there are so many moving pieces.

It's not me, it's God hearing prayers. Someone will come to me with an idea and it sounds wonderful, and I try to imagine ways we could do it. Then the financial reality hits that we simply can't — we simply don't have the resources. And about that time, someone comes along and says, "Hey, I've got this grant, or these volunteers, or this vehicle," and it's exactly what we need. That happens over and over again.

And it's not just other groups, it's lots of laypeople, too. The volunteers are so wonderful — they inspire you to keep moving in the right direction. It's prayer and the Gospel every day, you know — it's got to be about peace and justice for all.

How did you end up general superior of your order?

I don't know! I entered right after high school — I went to a local Catholic high school the sisters started. I always wanted to be involved in a ministry of direct service; I started out in education, then went into health care. The outreach center opened in 1989 when the sisters transferred ownership of a hospital, and I became director of that in 1990. I was elected superior in 2012.

It's a mission that never ends, even if it's just being present to people — that's a ministry in itself.

Amid pandemic, women religious persevere in ministries to those in need