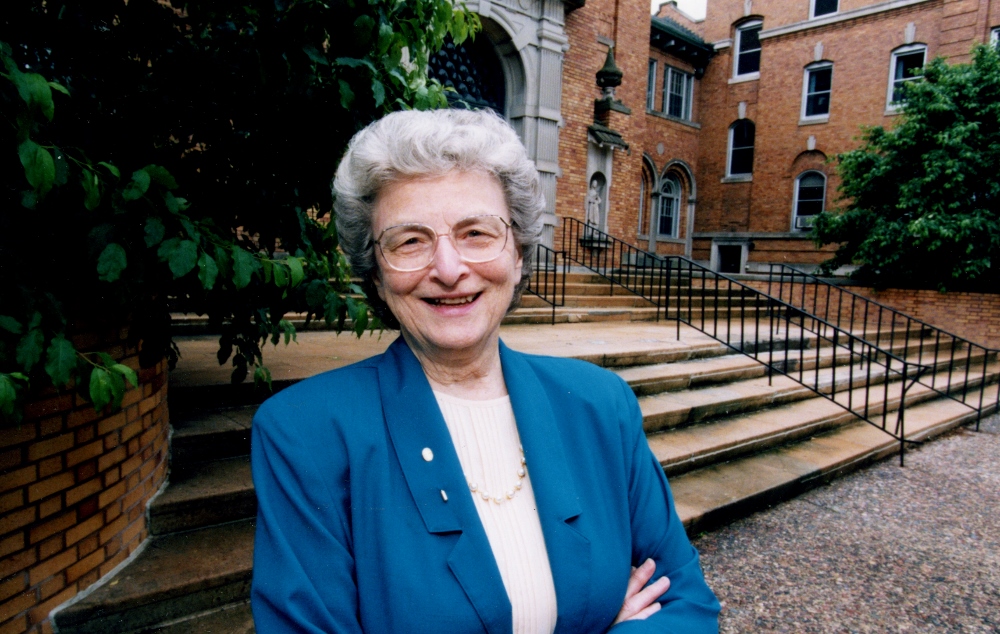 St. Joseph of Carondelet Sr. Mary Madonna Ashton in front on her religious community's chapel in Saint Paul, Minn., on the occasion of her retirement from St. Mary's Health Clinics in 2000. She founded the nonprofit that still uses donated medical services to provide free health care to those in need. (Used with permission courtesy of the Sisters of St. Joseph of Carondelet, St. Paul Province archives)

It took a fractured shoulder and pelvis to slow down St. Joseph of Carondelet Sr. Mary Madonna Ashton.

And now that she's 92, the slowdown — several months in a wheelchair, now in a walker and practicing to use a cane — is lasting much longer than she wants. But she's still busy.

"I'm on the go most of the time," she says. "They call it retirement. You still do it all, you just don't get paid for it anymore."

For Ashton, "all" is a lot: She holds two master's degrees, was president and CEO of St. Mary's Hospital in Minneapolis for 20 years, was Minnesota's state commissioner of health for eight years, then joined other Sisters of St. Joseph of Cardonelet in forming what would become the St. Mary's Health Clinics to serve those without any options for health care. By the time she retired in 2000, there were 11 clinics in the Twin Cities serving those in need.

Now, Ashton is a 2016 National Women's History Project honoree. This year's nominees are being honored for their work in public service and government, putting Ashton alongside people like the late Daisy Bates, who led the racial integration of Little Rock, Arkansas, public schools; the late Ella Grasso, the first woman to be elected state governor; and Barbara Mikulski, the longest-serving female member of Congress.

GSR: How does it feel to be given such an honor? You're in pretty esteemed company.

Ashton: It was a great big surprise. I didn't even know my name had been submitted. I didn't know anything about it. When the person called and told me all about this award, I said, 'I think you have the wrong number.'

I'm very honored to be getting it, it just seems like something impossible. It should be interesting and fun to meet some of these amazing people. I'm so glad that now I'll be able to go to Washington. Now that I'm in a walker, I feel like I can go. 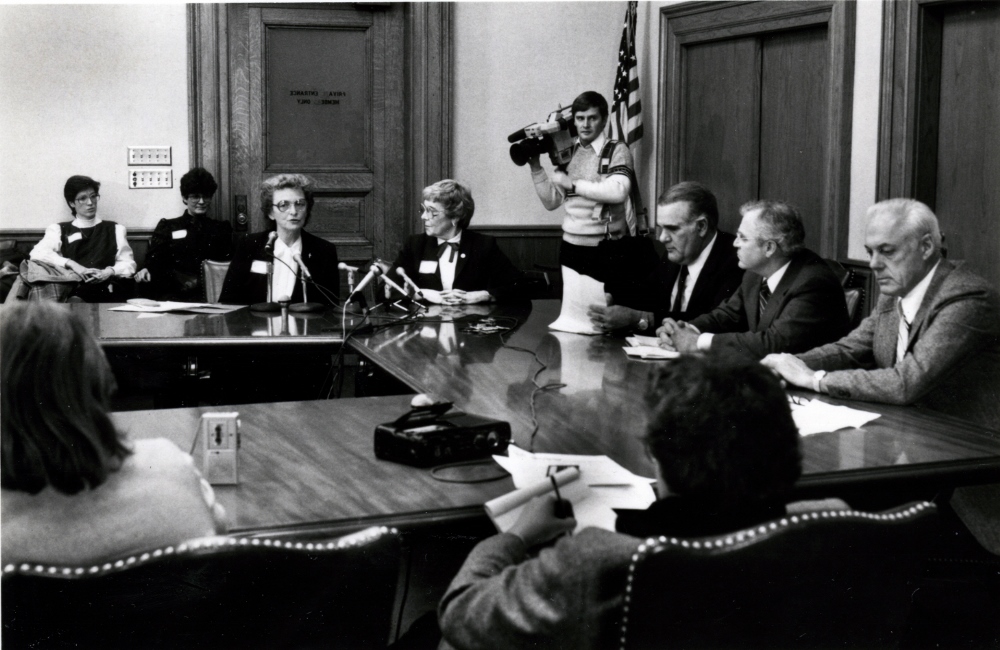 You had an amazing career. How did you get to do all these things?

Well, I was assigned by my superiors to certain jobs, or I was offered the state position, so you do them. I just went with the times — things needed to get done, so I did them. It wasn't a big deal.

When I fell and hurt my shoulder — I'm completely right-handed, and it was my right shoulder — so I've gotten pretty good at doing things left-handed. It needs to get done, and you pitch in and do it.

You were the state health commissioner from 1983 to 1991. Those were interesting times.

When I started at the health department, there were only four known cases of AIDS. For all practical purposes, it was a brand-new disease. And at first, people thought it was only in gay men, then it showed up in the blood supply, so we knew it was through this type of contact. People were so scared. They were just petrified, especially when we discovered it in the blood supply. That whole decade of the health department was a whole learning experience.

We had horrible things happening. A person came into the health department about 4 in the afternoon and wanted to see me. The guy said he had a guilty conscience: He had AIDS and had infected over 200 people. It was just awful. We had to go on the radio and tell anybody who had had any contact at all with this man needed to get themselves tested.

But it sounds like not everybody was happy about your department's response.

We had a press conference one night about this guy, and one of the guys from a national organization of gay people came in with a lemon pie. I was at the podium. On one side was the fellow in charge of our AIDS program, on the other was the guy in charge of the infectious disease program, and this guy threw the pie at me. Both the men with me jumped in front of me, so everybody got lemon pie in the face.

They were mad because they were very scared of the whole thing, and they wanted all the money of the health department put to AIDS. We had all these other jobs to do, but they wanted us to drop everything and concentrate on AIDS.

You were controversial before you even got the job, though, weren't you? When then-Governor-elect Rudy Perpich nominated you, there was a lot of opposition.

If I'd had any idea of the reaction of people, I probably wouldn't have accepted the job. But people were upset because I wasn't a doctor and I was a nun. I didn't know people paid any attention to it! You'd think people were afraid the pope would come over and take over the health department.

With the commissioner's job, it's really an administrative job, and I think most of the people since then have been non-doctors. The heads of the divisions are where you need the medical expertise, so all my division heads were doctors. And then to quell the Minnesota Medical Association's objections, I appointed a deputy who was a doctor who was very well-known and very respected. 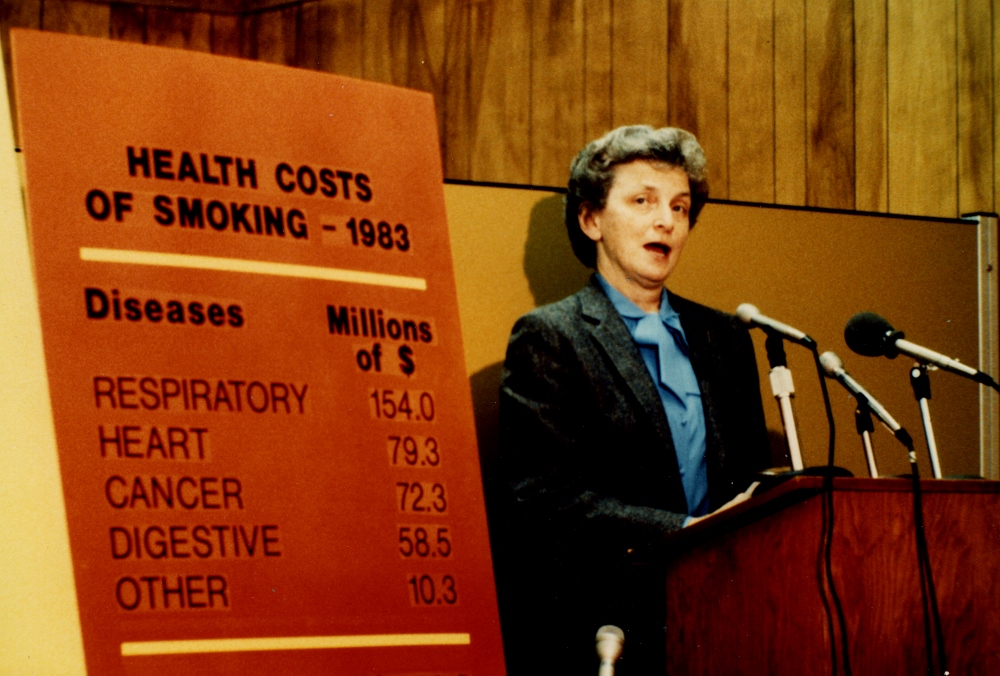 At a press conference at the Minnesota Department of Health’s Rochester District Office, Commissioner of Health, Sr. Mary Madonna Ashton discussed findings in the 1984 Minnesota Nonsmoking and Health Report. (Used with permission courtesy of the Sisters of St. Joseph of Carondelet, St. Paul Province archives)

And then you decided AIDS wasn't enough, so you took on the tobacco industry?

Well, it became increasingly evident of the detrimental effects of smoking. The main thing was to get young people not to start smoking, because once they start smoking, they get addicted. First we got the legislature to allocate $1 million to help stop smoking. That's what brought the tobacco industry into Minnesota en masse.

And it wasn't just the tobacco industry we had to fight. There was lots of advertising with athletic events, so we had a big fight with them because that was their income. I'll just never forget being in that conference room testifying all day long for a week to ban smoking in public places and on public property. Their attorneys kept asking me the same questions over and over with different wording, trying to trip me up. But we had wonderful attorneys on our side, and they were a great help.

The crazy thing was, when I was a kid, all my friends smoked, and I tried my darnedest to like smoking — it was the thing to do. But it just made me sick. So I was the only one in the group that wasn't smoking.

Did you realize what you were doing? That Minnesota's move to ban public smoking would start a nationwide trend?

Testifying for a whole week against the tobacco company was not the happiest days of my life. I was just glad when it was over. Only later do you realize what you really did. At the time, you're not thinking that it's a big deal or something important — it's just something you need to do.