Nagpur, India — Sr. Pooja Kollamparambil is happy that she has got a new house for the children of people affected by HIV/AIDS whom she has cared for the last four years. So far, the member of the Sisters of St. John the Baptist and Mary Queen community has been taking care of these children from a dilapidated room on the Nagpur parish grounds.

Kollamparambil , 42, is coordinator of the Nagpur Multipurpose Social Service Society, an NGO managed by the archdiocese. For three years, she ran a project for people with HIV, and when the project was completed in 2011, she started Asha Kiran (Rays of Hope), a center for children of people living with HIV/AIDS.

In late June, Archbishop Abraham Viruthakulangara of Nagpur blessed the new house, situated on the outskirts of Nagpur where 15 children live.

Sister Pooja, as she prefers to be called, shared with Global Sisters Report how she struggled to help people living with HIV face social stigma and ostracism. She is convinced that God entrusted this mission to her, and that he will provide for the children under her care. 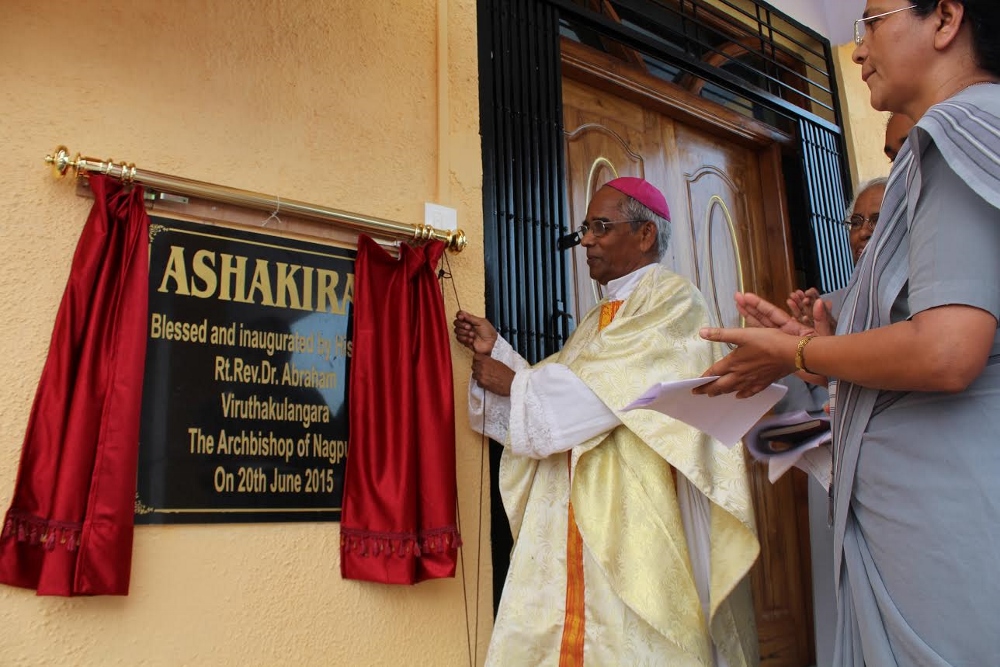 GSR: Why and how did you get involved in this mission?

Sr. Poola: As the diocesan social service coordinator, I used to visit families to counsel people affected with HIV/AIDS. During those visits, I met many people, particularly women and children, who suffered socially, physically and mentally. They were ostracized by family and society. The women were infected by their husbands, but their husbands’ families refused to accept the truth. So, when an HIV-positive man dies, his relatives will send his wife to her parents’ home and sell their children. I felt God’s call to help these hapless people.

How did you find these children? What is their background?

I did not find them on my own. I believe God has sent them to me. The children were brought here by people who had worked with me in the project for HIV/AIDS patients. After the project closed, they found jobs with other voluntary groups. These people, most of them HIV patients, continue to visit families. They tell me about the children of HIV-affected people they meet during these visits.

What do you do then?

The co-workers also explain to the HIV-affected and their families about medication for the disease and how it is taken. The medicine is effective only if taken on the dot every 12 hours. The workers also help victims acquire nourishing food. Good food and medicines have saved many lives or prolonged them.

Who are these children here?

Most of my children have no parents or have only a single parent. Some were with their aged grandparents who struggled to feed them. So, they did not bother about the children’s education. The children also didn’t listen to them. Neighbors and shopkeepers took advantage of these children, who would do anything for money and food. Nobody bothered about their future.

What is the future of these children?

These are HIV-negative children. I want to educate them and settle them according to each one’s capacity. They already show their interest in various areas. There is a boy of 10 who is little interested in studies, but happy to look after rabbits. He spends all his free time with these animals, feeding them and cleaning their places. Similarly, some are interested in music and dance, and we coach them to hone their talents.

After we settle in the new house, I plan to take HIV-positive children. 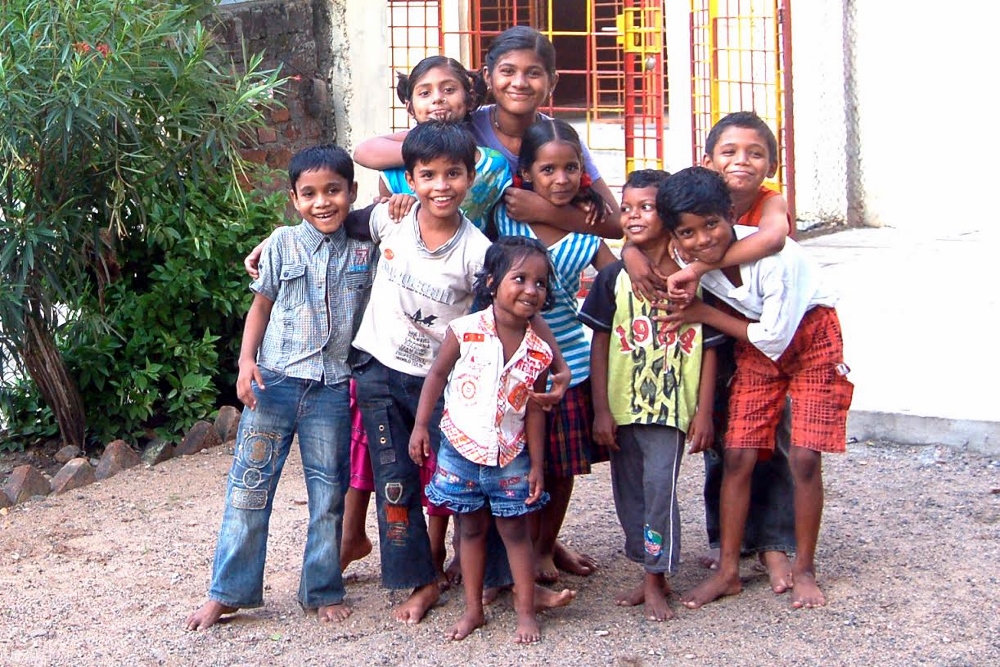 How serious is the HIV/AIDS problem in India and Nagpur in particular?

I am not sure about the current AIDS situation in India, since the latest statistics are not available. The National AIDS Control Organization deals with the AIDS problem in the country. It is part of the federal Ministry of Health and Family Welfare. It was set up in 1986, the same year the first AIDS case was reported in the country. The disease is reported from all parts of it now.

We had spotted 1,400 cases in one year in Nagpur [winter capital of the western Indian state of Maharashtra]. The main carriers of the disease are male truck drivers and vegetable vendors. They first hide the disease and pass it on to their wives and children. There are some female carriers, too. Long absence of their husbands from home prompts these women to go for extramarital relations.

Initially people are shy and afraid because society would chase them out of villages and even houses if people come to know they are HIV-positive. Now many affected people know they would have a miserable end if they hide the disease. So they approach hospitals and NGOs for help.

Why does society treat these people that way?

Because of ignorance and prejudices. I have noticed even people keeping a distance from these people. Some may allow a homeless HIV-positive person to stay in a corner of their house, but forbid them to interact with other family members. Some landlords forced their HIV-positive tenants to vacate. Even their neighbors forcibly evict them from their houses.

What is the church people’s attitude?

Christians, even if they are priests or nuns, tend to keep away because of fear. ‘You should not go,’ ‘It is in the air,” is general advice I get even from church people. They are a little shocked when I tell them that I eat with HIV-positive people.

Do your superiors support you?

Yes. In fact they are happy to have such centers. When I proposed the idea, they were a bit hesitant. When I explained the seriousness of the problem they were eager to do something for these people.

What I do is here only part of our congregation’s original charism. Our congregation was founded by Fr. John Maria Haw in 1919 in Germany. He began working with the victims of World War I. The congregation was started to meet the two urgent needs of that time: education of Catholic lay people and rehabilitation of alcoholics, former prisoners, refugees and other marginalized people.

What about church authorities? How do they support you?

Archbishop Abraham [Viruthakulangara of Nagpur] has been a great supporter from the beginning. We have the new house for our children mainly because of his help.

In fact, it was the archbishop who found the room where we stayed for four years. The parish priest and his assistant patiently tolerated our children’s pranks. They were pillars of support for us. We moved out because the room was collapsing. We miss the priests’ presence now.

How did you manage to build the new house?

Two years ago a benefactor from Germany visited us. We had five children then. She was impressed with our work and posted about the children in her Facebook account. When she returned to Germany she found many friends willing to sponsor the children. Later she also found sponsors for all our 15 children.

Our sisters in Germany make homemade cakes and sweets and organize events to raise funds for our poor people.

But this is not enough. So, our convents in India also help us financially. 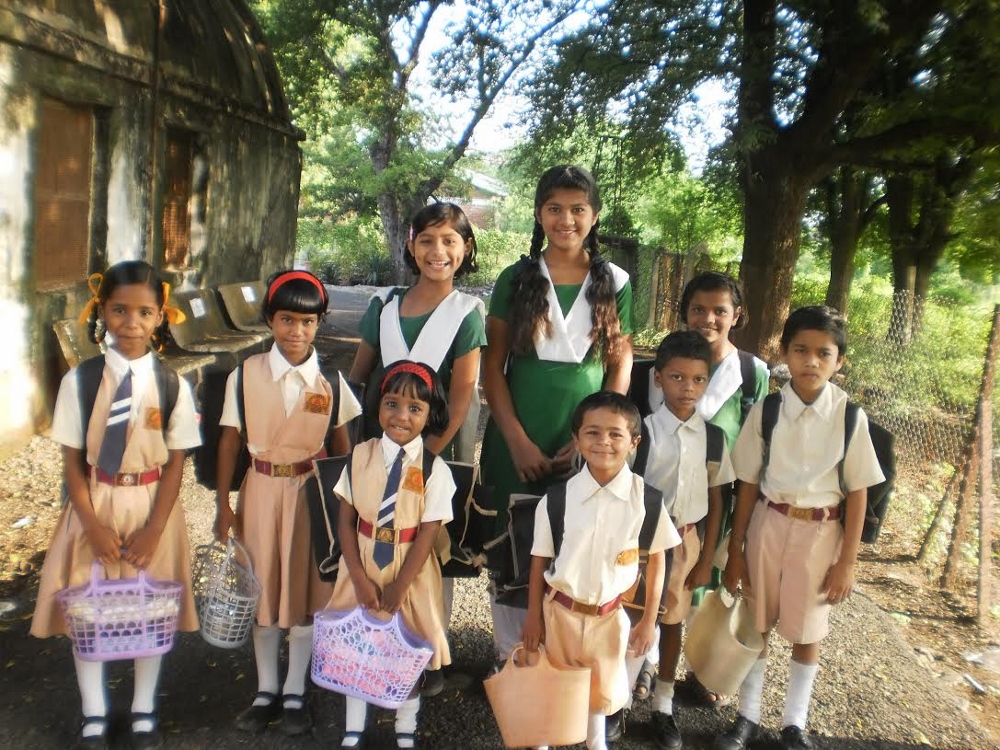 Are you worried about funds?

I never worry about the food or clothes for the children, because God has provided for them through well-wishers and friends until now. Whenever I wanted something for these children I got it from somebody. So I always feel the grace of God is with me and on these children. So I do not worry.

What were some of your happy and sad moments?

Three years ago, a girl came to us when she was in grade seven. She is the oldest among our children. Last year she appeared for the class 10 exam and passed with first class [60 percent marks]. It was indeed a happy moment for me. Now she is continuing her 12th grade.

It is indeed wonderful to discover that all my children are talented in different ways. We offer them opportunity to develop their talents, too. It takes very little time for them to learn a craft or an art. They are good in music and dance. In school they are the best students.

Coming to the sad part, I felt disheartened when three children left us for their village after three years with us. Now they graze goats or do odd jobs. I tried my best to help them, but their relatives were greedy to keep the children with them and take advantage of them.

What were you doing before taking over as the diocesan coordinator?

When I joined the congregation I had told my superiors that I wanted to serve the poor. Soon after my profession, they sent me to a center that conducted tailoring classes for poor young girls. That was the perfect introduction to a mission among the poor.

I have also worked among tribal people in Gadchiroli, another district in Maharashtra. We formed 15 self-help groups for women and conducted awareness programs. It was challenging to get those women to attend meetings and join various common programs. They used to be subdued and hidden, never attending public meetings. We encouraged them to come out and join meetings. One or two began attending. They were happy and mobilized others to join the meetings. Soon, all the women joined village activities. This helped improve their financial status.

What prompted you to become a nun?

After matriculation [10th grade], I felt attracted to religious life, mainly to help the poor. I had a cousin, a member of St. John of God congregation, who worked in Madhya Pradesh [central Indian state]. When she came on holiday those days, she narrated to me about her life among ignorant and poor villagers. This motivated me to become a missionary sister.

I was the youngest among five children. So, my parents and elder siblings did not want me to become a nun. They told me to go for higher studies, but I refused. My grandmother then tried to frighten me, saying life in the convent would be tough. She said nuns would have to get up at 4 a.m. and do lots of chores. However, nothing deterred me.

That was 19 years ago. I have spent all these years with the poor and found satisfaction working among them.