Sr. Roselin Chirayil left the Daughters of Mary to start a new order solely dedicated to caring for women with mental illnesses who live in poverty. Her Sisters of Mercy congregation works with women who often hit and bite her and her sisters.

Chirayil has looked after more than 600 such women at her two psycho-social rehabilitation centers in Kerala, southern India. More than 300 women have been rehabilitated, provided skills training that enables them to earn a living, and returned home. She recently won the Care and Share International Humanitarian of the Year Award.

The 62-year-old nun spoke to Global Sisters Report about her journey thus far.

GSR: What inspired you to begin the mission?

Chirayil: My initial inspiration was my father, who was a social worker. I wanted to serve the downtrodden. So I joined the Daughters of Mary [a congregation under the Syro-Malankara Church based in Kerala], although I belonged to Syro-Malabar Church [the other Oriental rite in India].

Why did you leave the congregation?

After some years, I felt a second call to serve women with mental illnesses who live in poverty. The sight of destitute women lying abandoned in the streets moved me a lot, and I felt a constant prodding to serve them. I shared this with my superior, and she agreed. But the congregation seemed more into establishing schools and health care institutions. Moreover, they were never keen on picking up abandoned women, as it involved police and legal hassles. My superior asked me why I wanted to take the risk. That dampened my spirit. So I left the Daughters of Mary in 2001.

However, I owe a lot to my old congregation. They helped me study nursing from the prestigious All India Institute of Medical Sciences in New Delhi. I still maintain a good rapport with them. The Daughters of Mary send nursing aspirants for psychiatric internships to my centers.

Was it easy to leave the congregation?

Before I left, my spiritual director advised me to attend a retreat. The retreat master said my decision was prompted by the Holy Spirit. I felt a deep peace within.

What did you do next?

A year after leaving the Daughters of Mary, I started a center on Sept. 26, 2002, for destitute women with the help of my family: Snehatheeram (Shore of Love) at Vilakudy in Kerala's Kollam district. Seeing my zeal, my mother rented vacant land near a minor seminary. I fenced the place and pitched a tent to start the center.

Now, we have another center at Mithrumala in Thiruvananthapuram [Kerala's capital]. We have some 320 patients, which includes 10 children born to abused women. Another center is coming up in Changanacherry town in Kottayam district [in Kerala] on 1 acre of land donated by the Archdiocese of Changanacherry.

Did you face any problems?

I used to go to the seminary for Mass daily. But one day [in November 2002], the priest refused me Communion. He told me that it was the bishop's directive. I met the prelate and cleared his misgivings: Some people said I was not a Catholic, but I showed him my papers that I was a former nun. He then assigned a priest to visit my center.

Was the bishop's delegate impressed with your work?

Yes. He saw me caring for 40 destitute women with little or no financial help. I had to find food, medicine and essentials for them. They had to be bathed and cleaned. Some women would plaster the tent with their excreta. During rains, the stink was unbearable. Police brought to me a woman from the streets who had worms all over her body and lice falling off her hair.

The priest saw all this and was more than impressed. Thereafter, not only was I given Communion, but I was allowed to set up a chapel at my center [in January 2003] where the liturgy was celebrated every day.

Why did you start a new congregation?

After setting up Snehatheeram, I longed to don the habit again. My spiritual director, Fr. Bernadine Valathara [a member of the Order of Discalced Carmelites], asked me to meet a Syro-Malankara prelate. The bishop agreed to my suggestion to start a new congregation but imposed conditions I could not accept, such as surrendering all land holdings to the bishop and the appointment of a director to oversee me.

Then Valathara wrote to the vicar general of Changanacherry Syro-Malabar Archdiocese. After visiting my center, Archbishop Joseph Perumthottam, who is now our patron, asked me to draft the constitution.

Now, we have six sisters, one novice who will profess vows May 14, and two postulants. Their formation is with Sisters of the Adoration of Blessed Sacrament, as we have no resources for training.

What are your challenges now?

Finances and lack of space as the number of destitute women has gone up. Initially, my family gave me provisions. One day, I required 3,000 rupees for medicines for a woman who was hospitalized. On the same day, we ran out of rice. A Hindu woman took me to the owner of a cashew-processing factory to ask for a donation. He asked me why I bothered for people whom God had forsaken. "Leave them alone." I walked out in tears.

I knocked at another door and got 2,000 rupees. While returning to the center, I came across a students' rally. Some of them saw my distraught face and asked what had happened. I told them that there was no food. They said, "Don't worry. We will get some." The boys then brought rice and other essentials that lasted a week. After that, we have never known want.

A television channel sought to hold a reality show at my center. I was not even aware of such a channel. When the program was aired in May 2011, a Hindu named Sashidharan Nair gifted us 4 acres of land in Thiruvananthapuram district. It was six times the space of our Vilakudy center. The program turned out to be a great advertisement for us, and donations started pouring in for some time.

How do you take care of the mentally ill?

They can be helped through medication. We have regular drills in the morning, including breathing exercises and yoga, which helps them focus. An hour of prayer follows. We have a library to encourage women to read books and newspapers. We also organize excursions to the beach, zoo and tourism destinations in Kerala.

Since music is a healing therapy, we started music classes. We hired a man, but the women scared him away. Then a retired sub-inspector who headed the police band squad came to the center. He trained our women, and now we have a band troupe of 24 women — the first band troupe of mentally challenged in India. They perform at church functions and earn between 10,000 rupees [$144] to 30,000 rupees [$431] per performance.

The women make carpets from old saris, rosaries, bead ornaments and candles. They also do basket-weaving and tailoring. On an average, these fetch around 100,000 rupees [$1,437] a year. We also have a psycho-social reference center that provides training to psychiatric social workers, psychiatric nurses.

What are your future plans?

No women should be on the streets. That is our goal. We have 10 children but no place to house them. I have taken a bank loan of 25 million rupees [$359,325] to build a second center. We want to expand to other states but have no money.

Tell us about your family.

My family is in Malappuram district in Kerala. I have four brothers and two sisters. My brothers help me financially. They bought me 56 cents of land at Vilakudy and gave me 200,000 rupees [$2,875] to begin my work. My sisters, too, are very supportive.

However, my family was pained when I decided to leave the Daughters of Mary. Kerala society still attaches some stigma to an ex-nun. People alleged that I left because I was interested in someone. I was in my 40s then. My mother cried a lot. However, all this did not deter my resolve to help the mentally challenged. I knew the Lord was with me.

Who will take over from you?

We work together, and all my sisters are capable of taking up the reins when need arises. Handling so many mentally ill people is an achievement in itself. All this is not my prowess but the Lord's doing.

You recently received the Humanitarian of the Year Award from Kerala's chief minister. How did you feel?

I have received many awards. I consider an award as recognition of our work. The only reward I seek is from the Lord. The bite marks on my hands and body made by my women are my badge of honor. 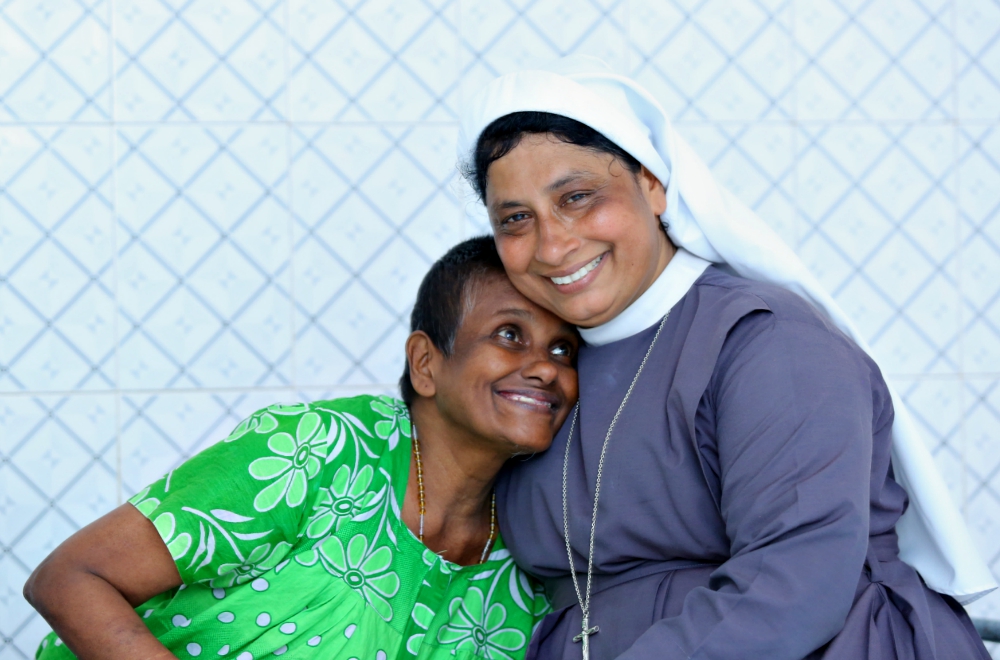 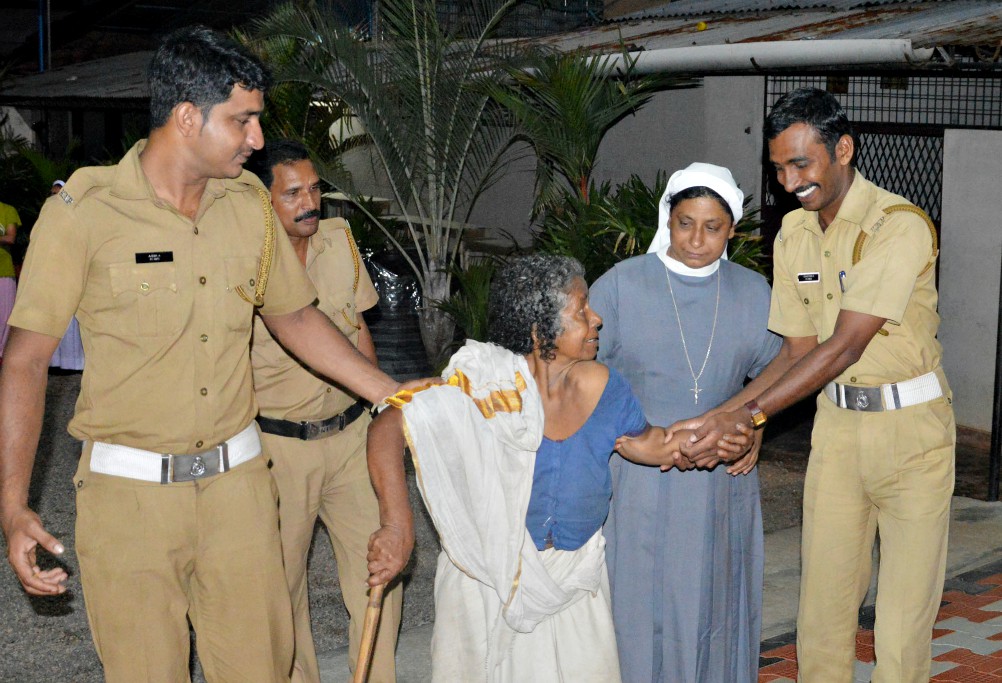 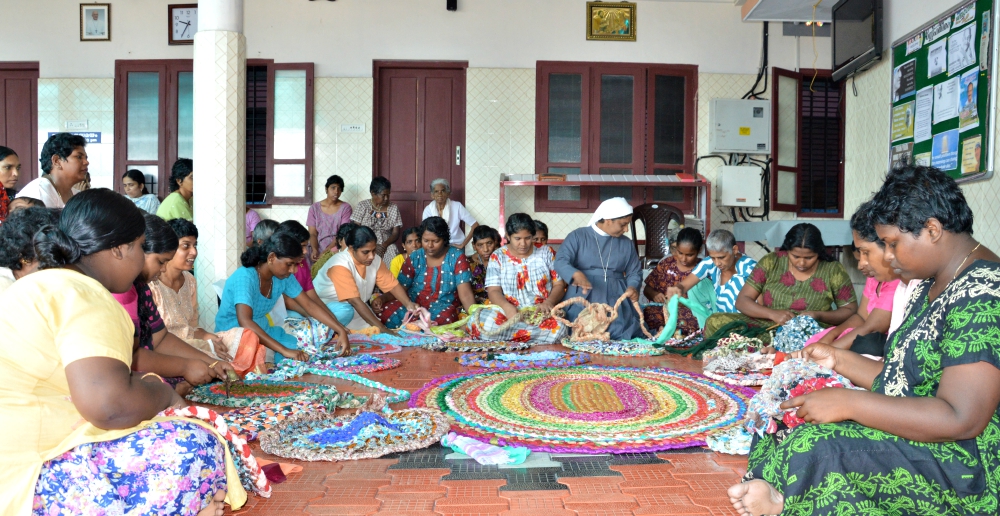 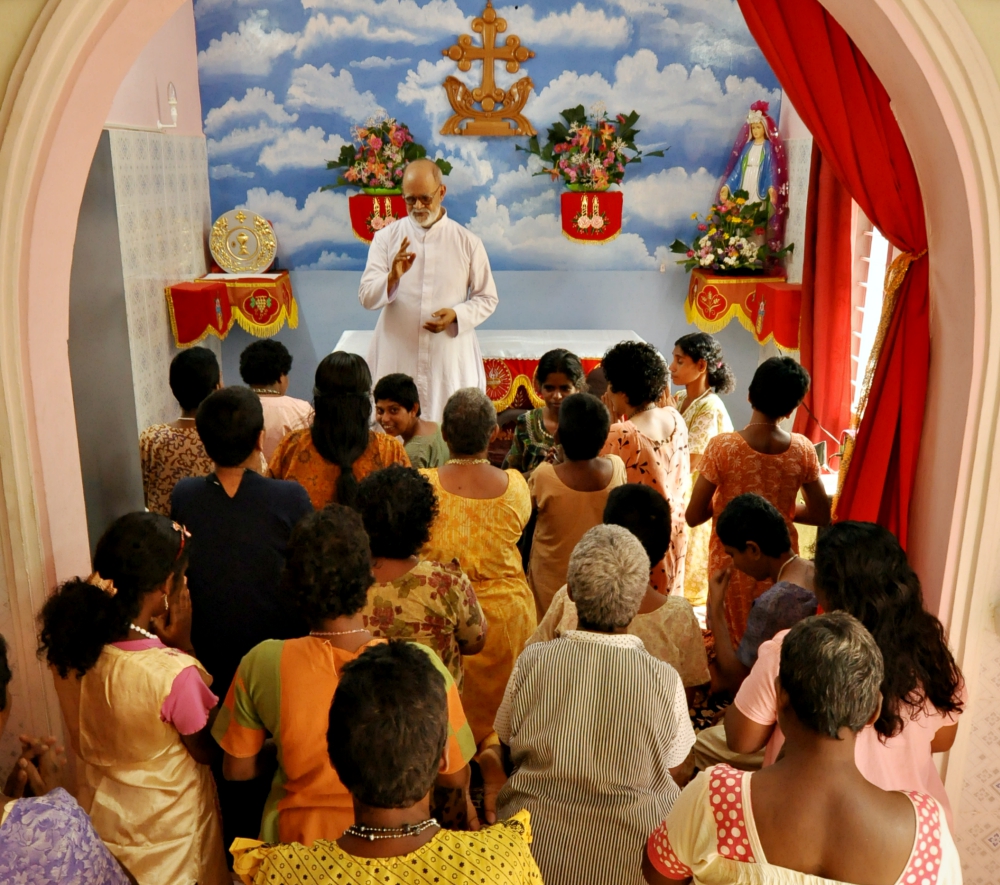 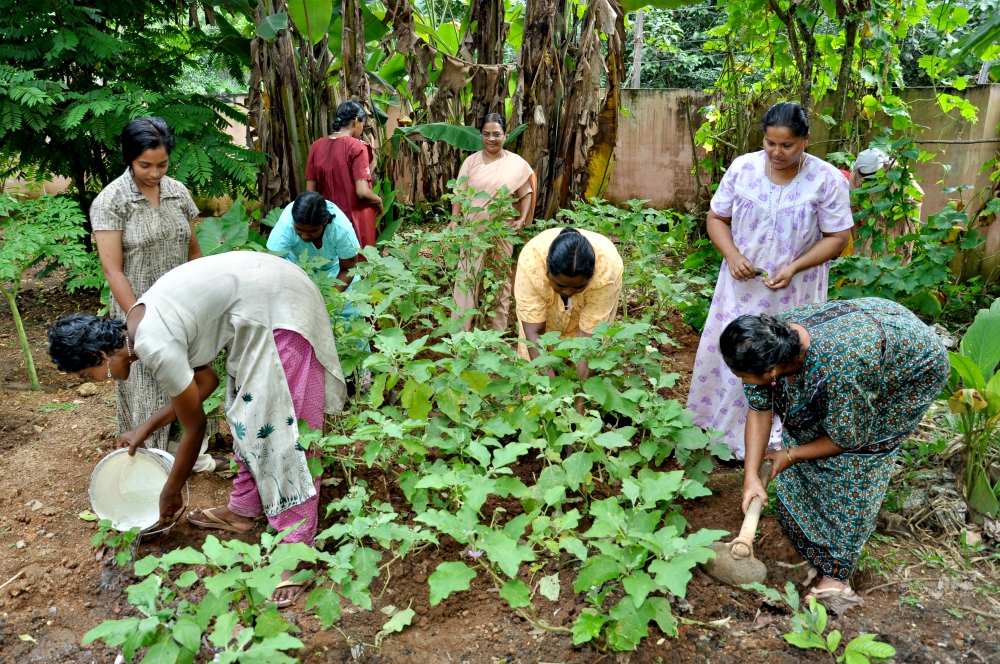 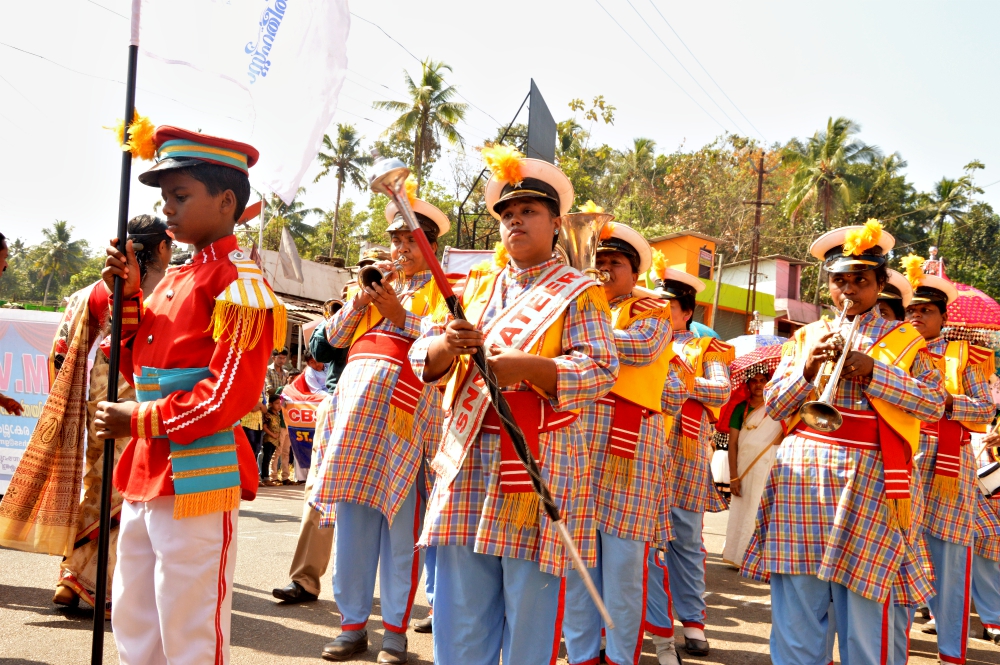 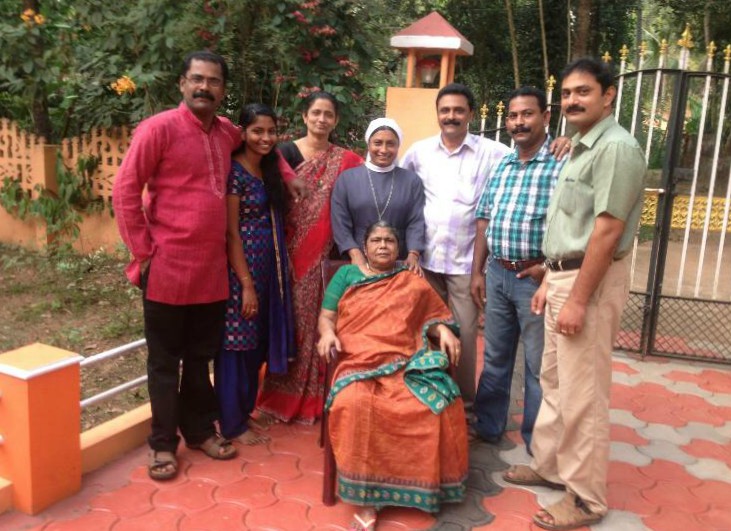