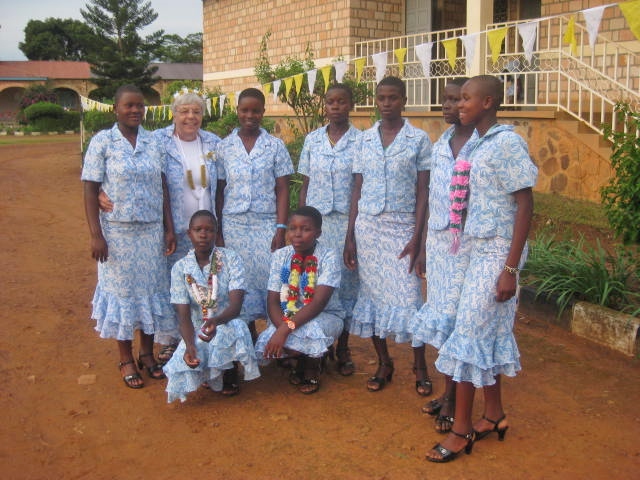 Sinsinawan Dominican Sr. Stella Storch poses with graduates of the school, all dressed in handmade uniforms and sandals the sisters bought for them. (Provided photo)

Sr. Stella Storch, a Dominican Sister of Sinsinawa, learned firsthand in 2000 that Tanzanian orphans whose parents were decimated by AIDS are treated like second-class citizens, left vulnerable to trafficking.

She first learned about the orphans in 1990, when Sr. Hellen Bandiho, a sister of St. Therese of the Child Jesus, came to Wisconsin from Tanzania and told her about the aftermath of the AIDS epidemic.

"There's no McDonald's for these girls to work at, no place to go and make money," Storch said. "So I took it upon myself to raise money and have done it each year to help them get through school."

Storch began by knitting about 100 dress scarves and selling them for $20 each so she could eventually afford a sewing machine for the program. She taught the young women how to sew first placemats and napkins, then clothing and bags while Storch went to stores to sell them at a reduced price.

While the sisters in Tanzania eventually came to run the school — which now includes a carpentry school for boys, classes for making soaps, and more — on their own, Storch now focuses on fundraising, writing grants and doing website maintenance; she visits Tanzania every few years. 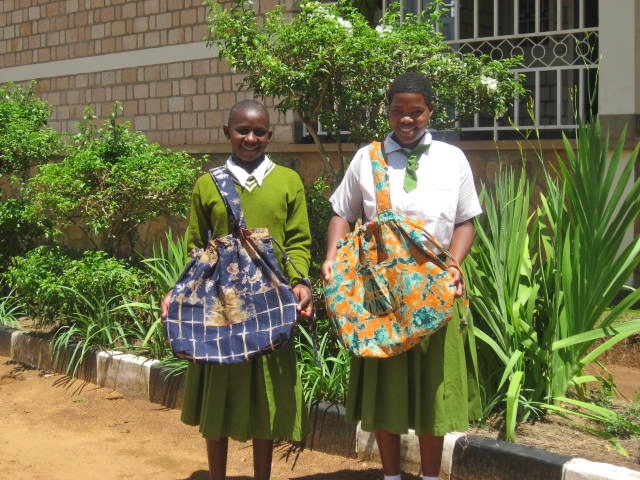 Girls in the program model batik bags they had made. (Stella Storch)

Do the orphans you work with have a common backstory?

Storch: In some cases, I say 'AIDS orphans,' but I'd say malaria and tuberculosis was also what killed their parents. In some cases, their parents were still living but couldn't take care of the girls, so the common thread was the poverty, and that was the cause of trafficking and other things.

When they lived with their guardian, it was awful. They were treated as second-class citizens in those families. The [guardians'] own kids were getting fed before the others.

Most of our girls did not have AIDS; that's a distinction to make. They were orphaned because their parents died. We do have one girl now who's HIV-positive. The government gives affected people the medicines they need free of charge, so everyone who has AIDS in Tanzania can get the proper medicine.

I've been to a lot of trafficking conferences for years, and they're all rescue programs after the women have been damaged, but this is preventative of trafficking, so that makes this program unique. These girls love their country, their families. There's nothing that makes them want to leave, but if they're hungry and someone offers them a job in Germany or the U.S., they'll jump at that chance. So if they have self-confidence, self-esteem, and they have a skill and can earn a living, they don't want to leave. I've asked the graduates at different times, 'Can you earn enough money sewing so you can support yourself and siblings?' And the answer has almost always been yes. 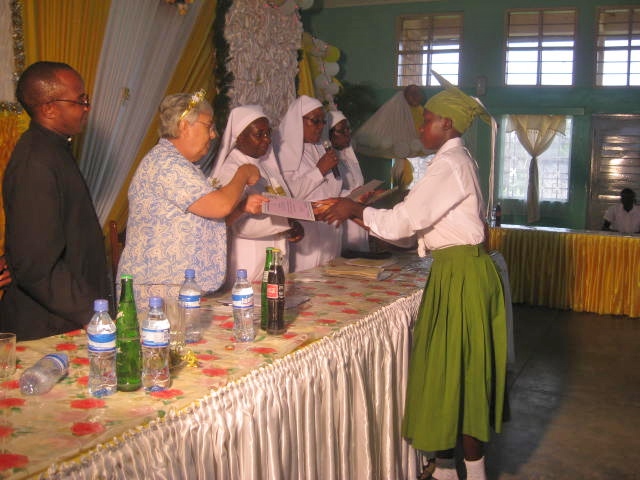 Sr. Stella Storch and fellow sisters presenting a diploma to a young woman who completed the tailoring program. (Provided photo)

What have you learned about Tanzanian people through this experience?

Most of these orphans lived with grandparents, and they walked to our school. In a couple of cases, they walked two hours each way. I think now there are 20 boarders who live at the motherhouse because they come from far away, and the circle of girls [the sisters] draw has increased.

What I have learned about Tanzanian people in this area especially is their resiliency and sense of hope. There's been a drought in Tanzania; they could not plant their crops, then they had a 5.7-magnitude earthquake. And you've got regular poverty that is extreme. These people live on $1 a day. I've been to their homes. They're made with muds and sticks, and their roofs melt when the rain comes.

They're also joyful and grateful. I'm a little chunky and they're skinny, and one time when I went there, in the morning, they all came with gifts for me, such as a papaya, sugar cane, pineapple, you name it, and I had to accept all those because they needed to show their appreciation. We did share it with them, but that was so hard for me to accept, from what little they had to give. You had to allow them to be grateful, too. 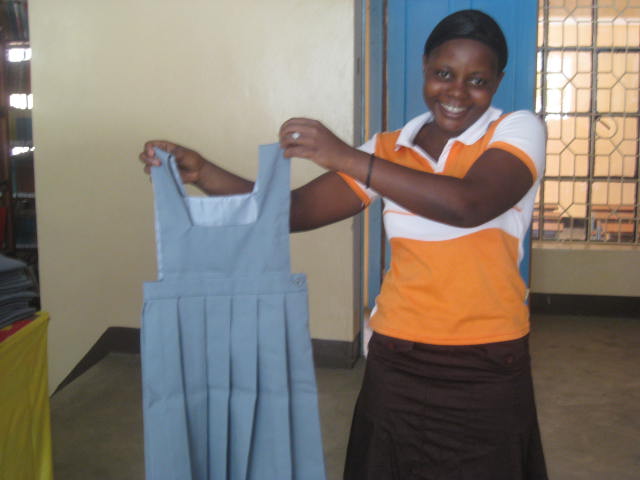 A girl shows a uniform she made for a school in Mwanza, Tanzania. (Stella Storch)

Tell me more about the logistics of the program.

It's not an orphanage. It's boarding. But several of them are married and move in with their husbands and move towns. One girl came and set up shop at her grandmother's house.

It's at the motherhouse. It's no longer a co-op; it's become a school. (The earthquake destroyed the two classrooms that we had just finished months before.) We also teach them computer skills. I buy 20 sewing machines a year, and [we've had] 15 to 20 graduates; the machines cost $250 because of high shipping costs.

We're located on the western side of Lake Victoria up north, just under Uganda, and that's why the AIDS epidemic was so terrible there. It started in Uganda, and people just migrated south. So anything we get from China, like our sewing machines, have to be shipped off the coast and have a long trip over land, and the roads are not good, which is why the sewing machines are so expensive.

We also have a morality class. I often describe this as: All the things a mother would normally teach a daughter, the sisters teach their orphans. Who teaches them about menstruation and good hygiene and relationships, all those things? A girl who was HIV-positive was telling me how shunned she was in other situations, and she couldn't believe how everyone welcomed her and made her feel at home. Those basic Christian values, the sisters impart; and they pray before each class and at the end of the day, and they always pray for the benefactors, and I've been there to witness all of that. 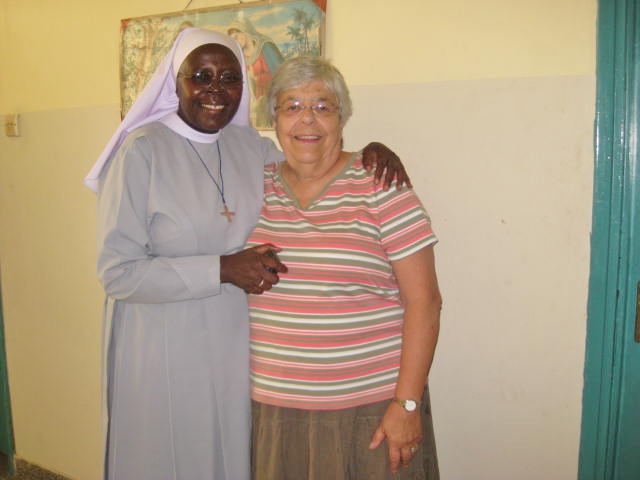 I'm not good at begging. I don't make a good Dominican; if I had to beg for food for myself, I'd starve to death. But I've gotten good at begging for others, especially when I know what great need there is. We talk about poverty in this country, but it doesn't compare to the extreme poverty there. There's no safety net, nothing. Their spirit has guided all that work. I'm not one to use religious words. I just tend to show it by my actions. And I'm very politically active, active in social justice, I demonstrate — I just do things. And you can't do those things unless you have a prayerful life and Spirit-filled life, because you'll burn out fast.

'Women in time to come will do much': Congregatio Jesu in Zimbabwe