Q & A with Sr. Vickie Perkins, head of an interfaith center for people who are homeless 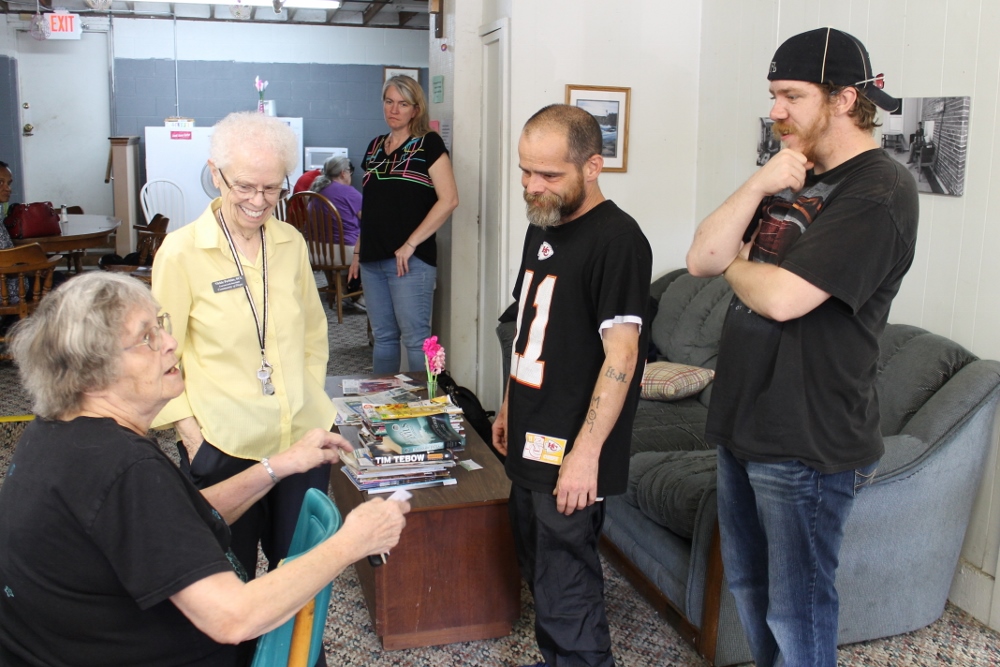 Sr. Vickie Perkins, in yellow, and another Sister of Charity of Leavenworth speak with two guests at Welcome Central. (Provided photo)

People without homes in Leavenworth, Kansas, now have a shelter, laundry facility, showers, and transportation to essential services thanks to the combined efforts of more than 30 local churches.

Taking the lead on that effort is Sr. Vickie Perkins, who with her congregation, the Sisters of Charity of Leavenworth, pursued a collaborative project with the area's faith community.

It began in January 2014 with Welcome Central, the congregation's clearinghouse that provides services and transportation to agencies for those in need.

After seven months of running Welcome Central, sisters began to wonder what they could do for people who are homeless. Though most locals told them they didn't think the town had a homeless problem, in the span of seven months, sisters found 58 people in need of shelter and services.

Perkins and her congregation decided to invite the town's churches to come together and figure out what they could do, and from there, 40 people from more than 30 different churches signed up to help. That meeting eventually produced the Leavenworth Interfaith Community of Hope; Perkins is the organization's executive director.

GSR: How did the project start out?

Perkins: We didn't have any money, and we didn't know anything about a homeless shelter, but things started falling into place. Catholic Charities said they weren't using the upstairs of their building, an old convent, and said we could use that; suddenly, we had a building. Things kept falling into our lap.

We again brought churches together and said, "Everything is happening, so we have to make this a reality." Our first meeting was September 2014, and we opened the shelter in December. The whole concept of it was, no one church or organization could do this alone, but together, it was possible to do. There are still about 35 churches involved.

After we opened the shelter, which takes 70 volunteers every week, we realized that we needed a day center [a place where people can stay during the day], because Welcome Central has kind of become the de facto day center. It's hard to do the work we want to do to help people move toward the path of independence when we're the day center. We finally decided that we would build a building. I'd never make that decision again [laughs], but it was the only one we could make at that point.

The city gave us land. We bought some additional land next to it and started working on the shelter. Within a few months, we're going to open the building, which will house the shelter, Welcome Central, and a day center. It will also have laundry facilities and showers. A couple of us every Tuesday take laundry home, but in this new facility, they can take a shower, do their own laundry. I'm really excited about getting this new place open. 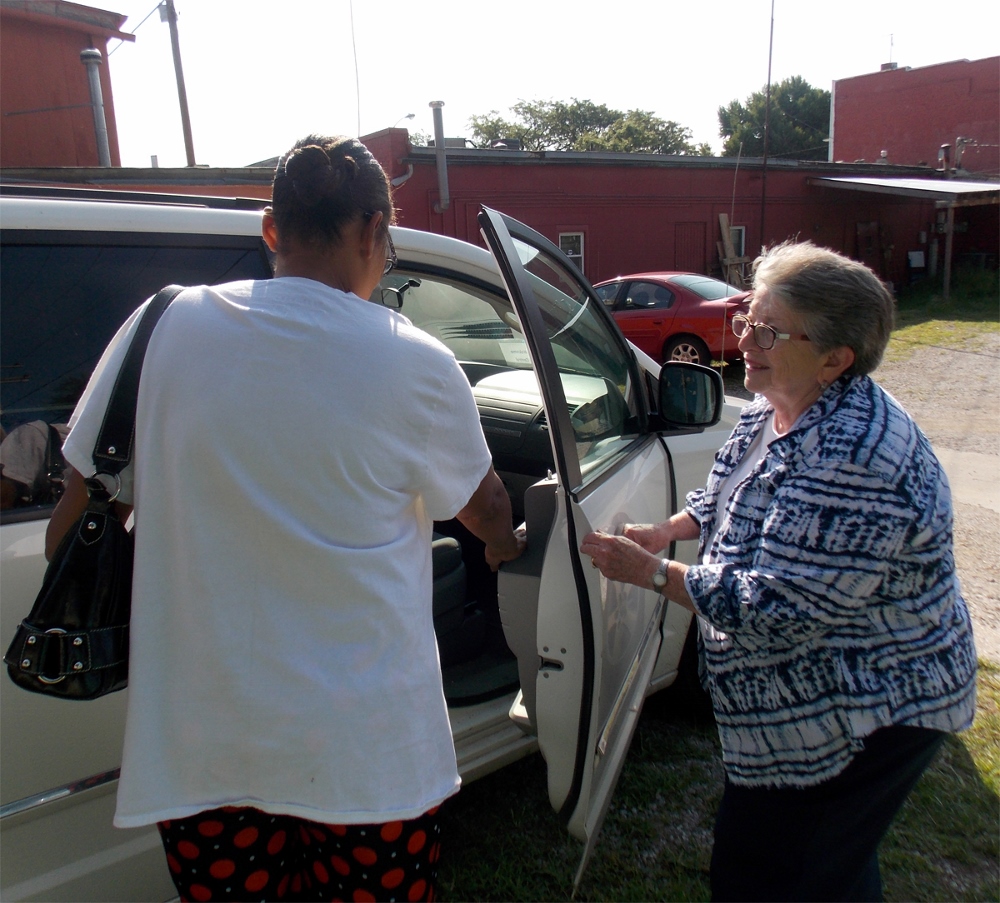 How did the coming together of churches and communities happen?

Originally, we invited churches just to tell us, in 2014, what they were doing and if there was a way we can support that. There were a number of churches doing a free community meal, and then different churches started taking care of different weekdays for that.

In that experience, we got to know a lot of the church people, so when we wanted to address the homelessness thing, we wanted to invite all the churches that had been part of any of this — the question-answer part, the information part — if they had been a part of anything, we invited them to be a part of it. There are about 32 to 35 churches actively involved, and we're open every single night. A lot of churches send volunteers, and a lot of churches provide financial support.

When we started to open the center, we sent out a list. We had no money. I had a budget of $30,000 to open this thing. We sent out wish lists to different churches, and now we could give everyone in Leavenworth five washcloths — we got thousands of them. Soap, shampoo. We got two sets of cots donated to us, and we had a pastor come in and say, "I can't walk down the street without people handing me a set of sheets." Anytime we run low on something, we send a list to various churches, and suddenly, we have what we need.

At the blessing for the shelter, the night we opened, one of the pastors said, "This goes way beyond ecumenism; this is living the Gospel together." I've never had an experience like this with the interfaith part. It's amazing to watch, and I've learned so much about different churches. People really have stepped up and worked together. At that one meeting, when we said, "Sign up if you want to help," I don't know how many people stopped and said, "You know, we couldn't do this by ourselves, but I bet when we get together we'll be able to." And we were.

At the LCWR assembly, St. Joseph Sr. Mary Pellegrino made a call for communion and collaboration to be the focus of religious life. As someone who has been part of that process for years, what suggestions do you have for communities hoping to reach out?

Invite, invite, invite. The first meeting was at our motherhouse, and we invited several churches at a time, invited them in to tell their story, and honestly, they came. And then after we had done that, the word started to spread to other churches who hadn't responded the first time, and now almost every church is involved. We started by asking, "What are you doing?" and went from there. In the discussions, you hear a common thread, and eventually, you say, "OK, this seems to be the thing that's missing." Then they're willing to say, "We'll help with this, too." 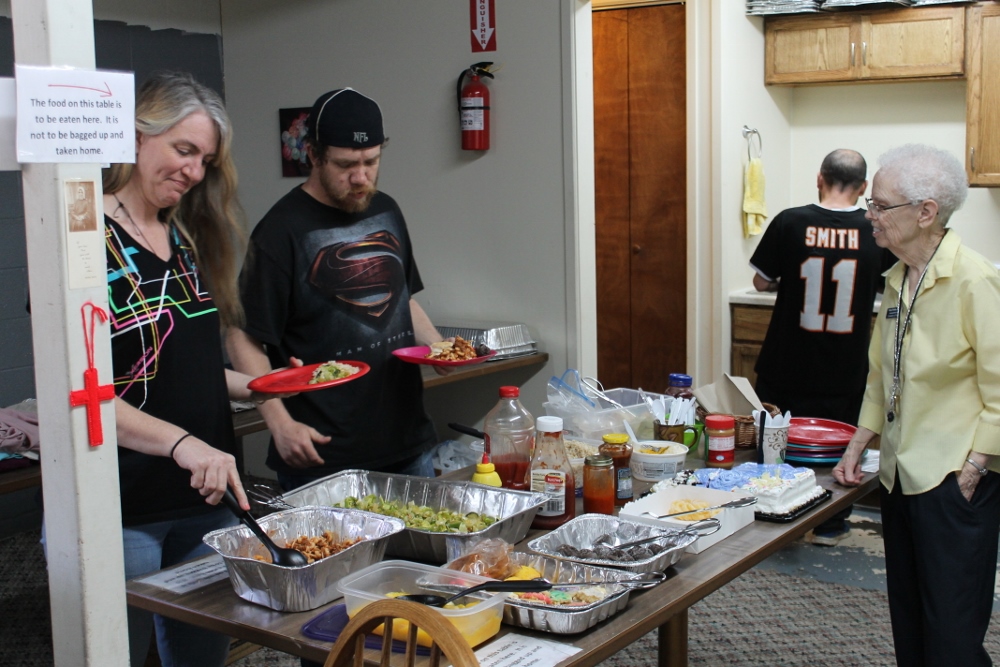 In what ways has collaboration enriched the project? And has it posed any obstacles?

Truly, there have not been obstacles. I think what collaboration brings to it is, it makes it possible. No one church can come up with 70 volunteers a week, but when you've got 30 churches working together, that is very doable.

We formed four task forces before the shelter (to take care of policy and procedures, materials, bylaws, etc.), and those task forces were from different churches, and they just went to town. Within three months, we opened it. If any of us had any experience, we couldn't have been able to do that. There wasn't a person here who knew anything about running a homeless shelter, and yet it happened because there were enough different groups involved.

I've gone to a lot of different churches to talk about it, and it's always amazing to me how at home I feel in all those churches. It really is a wonderful opportunity to learn and to experience God's work in ways that are beyond anything I've had before.

Ministry | Q & A with Sr. Vickie Perkins, head of an interfaith center for people who are homeless

Teaching music in Jerusalem an extension of Mercy sister's ministry

Blessed Catherine Kasper's legacy: 'No gift is too small'

Our lives are mission: Sisters reflect on Pope Francis' call to holiness