Six years after a major earthquake and tsunami triggered a meltdown at nuclear reactors in Fukushima, Japan, Catholic women religious are still working with the thousands of people the triple disasters affected.

On March 11, 2011, a 9.0-magnitude earthquake struck about 80 miles off Japan's coast, causing a tsunami with more than 30-foot waves. The official estimate is that the two disasters killed more than 15,000 people with 2,500 missing. Hundreds of thousands lost their homes.

The tsunami also damaged nuclear reactors, and an estimated 300,000 people evacuated their homes over the next several days as Japanese government and power-company officials struggled to contain the disaster. More than 100,000 people haven't returned, either because areas are still contaminated or because they are uncertain they can trust assurances their houses are safe.

Immediately after the earthquake and tsunami, women religious responded to the needs with an intercongregational effort. They helped in a variety of ways in the continued cleanup, providing comfort to victims and assisting other volunteer and religious organizations.

Many congregations have volunteered over the years in different parts of the affected area. In Fukushima, there are five different congregations still involved: the Sisters of Marie Auxiliatrice, Franciscan Missionaries of Mary, Mission Congregation Servants of the Holy Spirit, Sisters of the Visitation of Japan and Society of the Sacred Heart.

Sr. Mieko Shinjo, provincial of the Society of the Sacred Heart in Japan and president of the country's Association of Major Superiors of Women Religious, and Sr. Masako Egawa, a Sacred Heart sister who has spent three weeks each month at the Fukushima project, provided insights into the state of communities in Japan and how the congregations work together in this effort.

GSR: Can you please tell us about women religious in Japan?

Shinjo: There are about 80 congregations and several contemplative orders in Japan; about 76 or 78 belong to the association. Some congregations have many members, and there are many who are very small congregations; about 10 originated in Japan.

The Catholic population in Japan is very small — 0.4 percent of the whole population [about a half million out of 127.3 million people] — but in relation to that population, the ratio of the religious women population is quite high. In 2014, the number of religious sisters was 5,216. In the past two years with the aging population, we have less, so now about 5,000. Congregations are aging, as is the population of Japan.

What major ministries are sisters involved with?

Shinjo: Many are involved in education, schools and hospitals. I think institutional work has been effective for spreading Christianity or Christian values. As the Catholic population is so few, if you have institutions — schools, hospitals — you can reach more people. Many congregations also work with parishes and dioceses, do retreat work, work accompanying people in faith, work for human rights, women, migrants, etc.

How did sisters become involved in helping those affected by the Fukushima disaster?

Shinjo: The major superiors' association for several years has been talking about how we can collaborate with each other and go beyond the boundaries of our congregations. So that has been a common issue or theme.

Then when [the disasters] happened in March 2011, the big earthquake and tsunami, the Catholic church tried to establish how to give relief, and Caritas Japan and the bishops sent out this call of an emergency. We established a kind of 'sisters' relay' so any congregation that could send, even for a short time, members to help in the area did so. We continued that for one year, and then the second year, we were getting more established in those areas. All the congregations continued the relay in prayer as well as continuing the work there.

It is an area where there are very few Catholics, and there are many who have never heard about sisters. The religious also are an aging population, and yet even those who were retired sisters — 70 or 80 years old — live there or go as volunteers, providing different kinds of support. Many volunteers, whether Christian or not, have seen the hard work of sisters.

Egawa: Several congregations are working together along with members of Caritas. We support staff members. [There are about 10 sisters on average who are working in the area.]

Some of the sister congregations have their own houses; others live together. Mainly, we are working to support the base of volunteers in their work. Volunteers come from all over Japan. Mostly they are 'repeaters' — volunteers who have come many times, retired people because they have the time. But during the summertime, we have high school students and university students who come and work.

What are the volunteers doing, and what are you doing to support them?

Egawa: The big thing now is tidying up the houses. The residents may come back, or they have decided not to come back, and then the houses have to be demolished. But before that, we have to clean up.

In some areas, they have not been allowed to come back [since the disaster]. We have to cut down trees because of the radiation. The men usually work the chainsaws, and we tidy up the house. They have a special black plastic bag that can contain 1 ton of debris, and we put all the debris and other things that are contaminated and send them to some places where they are stored. The houses where people want to come back are mostly of elderly people, so they can't do this themselves, so they ask us to do this.

So are the sisters helping with actual cleanup?

Egawa: Sometimes. But most of the sisters are over 70 years old, and the eldest is 90 now. They can't do that, so they welcome people at the base. They visit those living in temporary housing. There are many areas, a kind of a village of temporary houses, and so we visit those places. There is a gathering place in each area, so we go and visit those places and listen to these people. After this, they get to know one another better and feel more at home. To share their experiences is very hard. They are very tough and hard stories.

What is unique in Fukushima is the radiation. Other places have the tsunami and the earthquake. We don't say it's easy, but it's possible to reconstruct or restore [there], but with the radiation — within 25 kilometers from the power plant, people are still very concerned and worried and not sure about their future, what their life will be like. They've lost everything. Their houses were washed away and, at the same time, because of the radiation, they are not allowed to go back. In some cases, from the outside, the houses look very beautiful and have been maintained, but how long? We don't know. The government says 30 years or 40 years, but after 30 years, who will go back?

So what they are doing now is keeping the contaminated soil and debris in black plastic bags, and they are piled up. And it's really expanding. The government wants people to come back. So to have people come back, they have to have these radiation cleanup activities, which means more and more black bags.

What are the areas in Fukushima that are being repopulated like?

Egawa: In one area, there is only one hospital and one small convenience store. One post office is open. Little by little, some shops are reopening, but still [very few] people have come back. So what we really want is to have government people come and see with their own eyes and listen to the residents' voices with their own ears because the information we usually hear on TV and newspapers is not exactly what we're experiencing now.

Egawa: The government always says things are progressing, the solution is going on, you don't have to worry about it. They never come listen to the voices of the local people. The worst places, they never come.

People are furious because of the Olympics construction. [Japan is hosting the 2020 Summer Olympics.] We need reconstruction and restoration of houses, but workers are now leaving Fukushima and going to Olympic places because the pay is better. 'They are not thinking of us,' that is the complaint we hear. So much money is being spent [on the Olympics].

Can you please explain more about the importance of presence with the victims in this disaster?

Egawa: We have a handicrafts and needlework group at the church, and we go around and visit different gathering places in temporary housing once a month. We work together to make bags or other small things. That's where they come together and feel so at home, have a cup of tea and work together. Some say it is the only place they can come together and talk.

They get together and share. Their experience is just so, so awful. They lost everything. They lost their houses, but on top of it, they lost their dear ones, their daughters or fathers. And now after five years they are chatting and laughing and enjoying this time of sharing.

Shinjo: Those who come to volunteer are not necessarily religious people or Catholics, but they are sent to places to help. But they come back and have this reflection time where they share their experiences. So that is some of the work we do in the base.

There are many interreligious groups that want to do something and went there. We went there, and Catholics are not well known, but now they know us as 'Caritas' — 'Caritas-san.' ['-San' is a Japanese honorific that translates to 'Mr.' or 'Ms.']

This is one of the contributions of religious congregations. We can take risks. We don't have to be there permanently, but we respond to the need. Congregations are beyond the boundaries of parishes or dioceses, so we can work more freely.

How do you see the Holy Spirit working through the efforts of the sisters in Fukushima?

Egawa: Somehow, it just comes about — to make people feel and see the love of Christ through us. When we have meals together — most volunteers have never experienced being together with sisters, but now they know. They want to sit together with sisters. They are Buddhists or other religions but feel so at home with us. 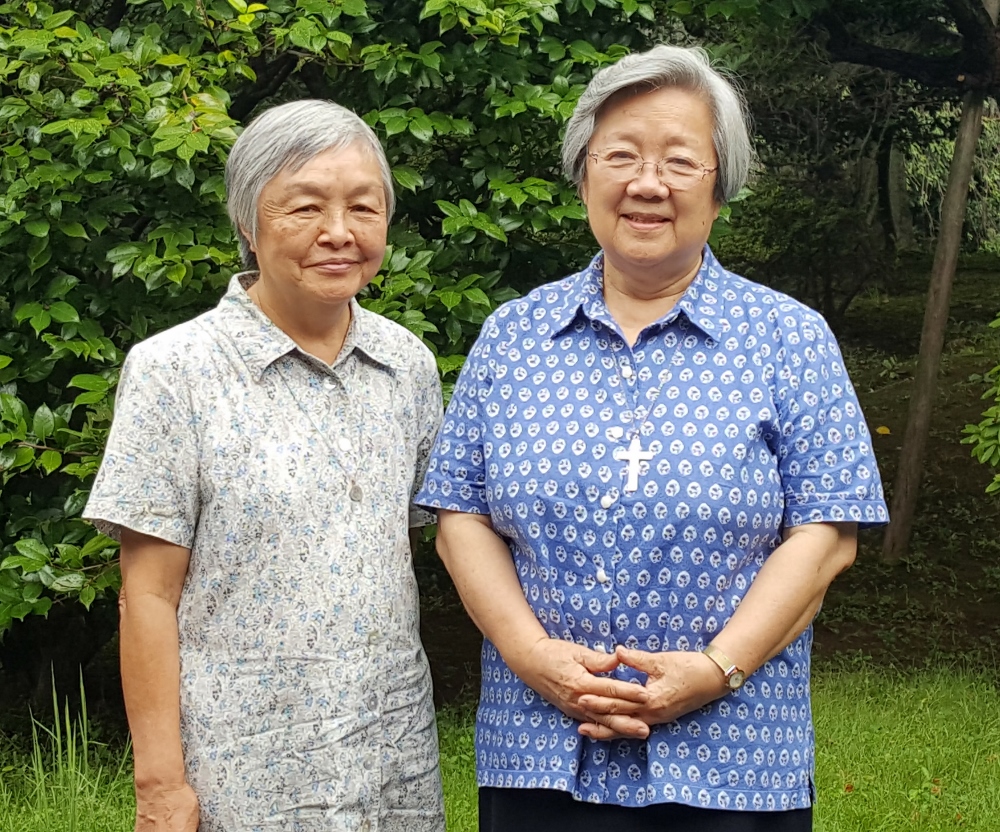 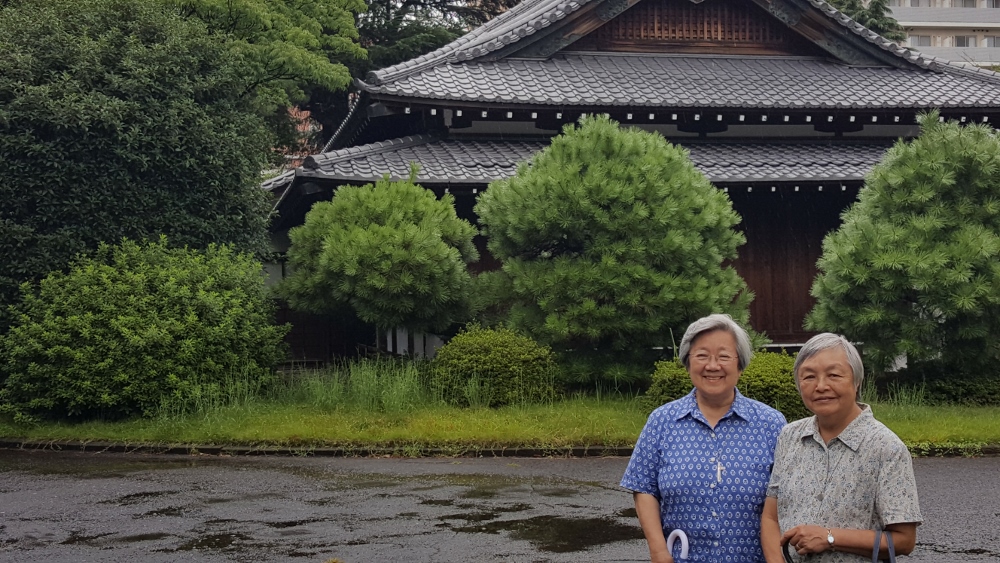