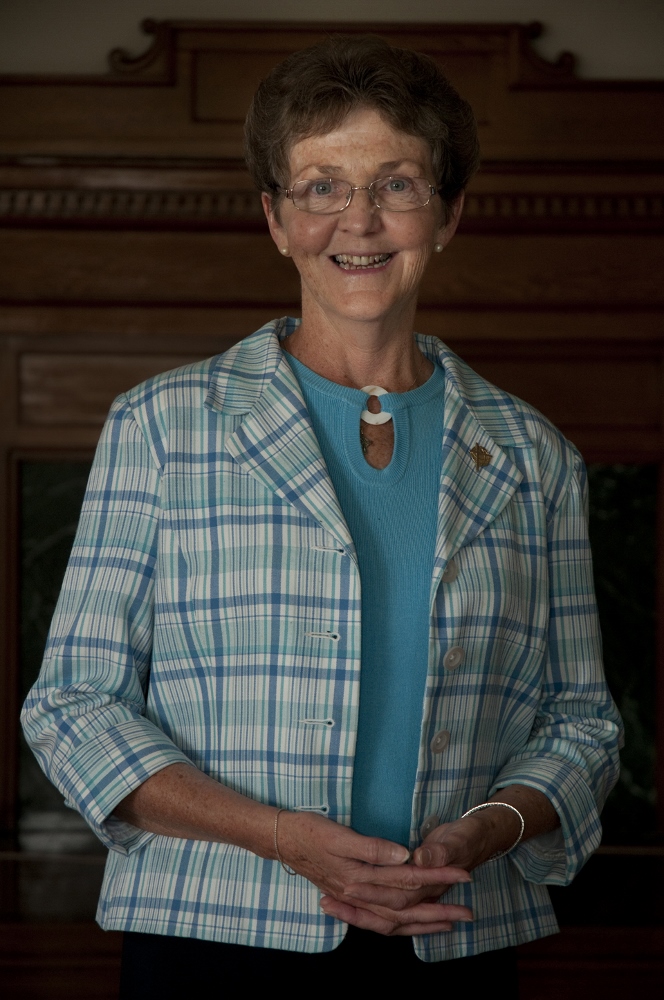 St. Joseph Sr. Catherine Nerney has served as director of the Institute for Forgiveness and Reconciliation at Chestnut Hill College since its inauguration in 2008. The institution promotes peace on the Philadelphia campus with events like Forgiveness Day and weekly skill development sessions, but it's also focused on conflict resolution on both a national and global scale.

Earlier this month, Nerney spoke with Global Sisters Report about fostering reconciliation in the United States during what seems to be a particularly polarized presidential election.

GSR: I'm interested in what you, as a professional peacemaker, have to say about reconciliation as it relates to the presidential election. But before we get into that, can you tell me more about how you got into forgiveness and reconciliation work in the first place?

Nerney: By professional training, I am a systematic theologian, and my area of expertise is ecclesiology, so the church's mission to be about this healing and reconciling work with Jesus has been something that has always been important to me. I've studied what it means to create a world that doesn't try to absorb people into sameness but allows differences and diversity to enrich us all, much like the triune God where the three are one, and the one are three, and one does not absorb the other, but they flow in and out of the other.

So what does it look like to try to create a world where we live so that we can allow diversity to flourish and enrich us? That's been the perennial question, particularly in the human community, because we do not love perfectly. We do not really allow differences to enrich us. We have early on become threatened by the different, the other. So I started to study forgiveness and reconciliation as a part of my theological program.

Ten years ago, I spent one semester in Rwanda working with the victims and the perpetrators of the Rwandan genocide. I wanted to gather stories from people as to how they could possibly go on living after the suffering of this atrocity, and I learned so much from them about the journey to forgiveness and reconciliation, and about what they were doing to not promote the kind of retaliation and revenge that would perpetuate the evil and violence that they had suffered. It was so absolutely life-changing for me to listen to these people resolve that — with God's help — they were going to walk this path to forgive and reconcile.

And this idea of unity and reconciliation, that's connected to the charism of the Sisters of St. Joseph?

Chestnut Hill College was founded by and is still sponsored by the Sisters of St. Joseph. The Sisters of St. Joseph's mission, which goes back to 1650, is that we live and work so that all people will be one. It flows from Jesus' prayer before his death that all would be one as he is in God and God in him. We have only one purpose for existing, and that's to help overcome any divisions that keep us from the dream of God for communion, for unity. Unity and reconciliation, we say, is our spiritual work. And everything that we do is to promote that, so that's sort of an undercurrent that permeates every one of our institutions and so, certainly, our college.

Now turning back to the presidential election in the United States. It seems to me that our political culture has become extremely divisive. Do you agree, and how should peacemakers be fostering reconciliation in their respective communities?

The political arena today is a tragic and unfortunate demonstration of the culture of violence and domination that we are so hard-working to overcome, so we have plenty of fodder for why we need to promote this alternative and become better at it ourselves. I think to change a climate that has become so antagonistic and rife with dissension, we have to make a commitment not to feed into it, that in our conversations with others about the present-day situation, that we will try to listen respectfully even to those whose opinions differ from ours. How we respond to the people with whom we disagree is a No. 1 contributor to whether we allow this to go on.

What do you think about the protestors who shut down a Donald Trump rally in Chicago earlier this month? Were they responding poorly to someone they disagreed with?

I think some active resistance to what I would name as evil — as a divisive attitude and violent speech patterns — I think active resistance to that kind of active violation of civil discourse needs to take place, regardless of the political party that is promoting it. If it's disrespectful of the dignity of a human person, and if it really does not promote the unity of our nation, then we need to actively say, 'We will not tolerate this.' So I guess I'm on the side of protesters, as long as their efforts are nonviolent.

But we need to respect and care for a person even though we disagree with their ideas, so when we're working on forgiveness work, we make a careful distinction between what a person does that is harmful and the dignity of the person herself. We never reduce a person to the wrong that they committed. We don't talk about this evil person, we talk about an evil deed. So I don't want to talk about an evil man, even if I want to disagree with the way or what he has said or done.

How do we do that? What does that look like in real life? Regardless of who wins this election, a large portion of the country is going to be angry.

How that discussion starts is with clear principles that everyone agrees to, like a respect for the dignity of a person even if we are 100 percent in disagreement of their political views. How we speak to each other is another principle we can embrace together. We will listen respectfully and humbly, with an openness to assume that this person has something to teach me. If I'm really listening, I should not be holding in my mind what I'm going to say when you finish. I try to receive what you're saying almost as an empty vessel, so I'm receiving what you're saying. There ought to be a natural pause after you finish before I would have any response to give. When someone is jumping in the second someone is quiet, obviously, they're not receiving the last thing that that person is saying.

The truth is, we need to change our thoughts of certainty as being the No. 1 claim that we should have in speaking. If we could all be a little less certain that we have the fullness of truth, we might be a little more open to what another person is bringing to a conversation, and then compromise would be a natural way of incorporating both pieces of truth into a fuller picture. We are so far from this it sounds almost too idealistic to even speak about, but if we re-establish the common values that hold us as one, we can make a commitment to healing this divide.

And forgiveness is a part of that. There are so many grudges that people are holding on to, whether it's something that happened to their parents or someone who lost a job because this group came in or that one went out. There's so much that has to be processed and let go of and dealt with, even the pain that it caused and how we can work for a better future.

One of the things that strikes me is that often, the political arena promotes a kind of religious affiliation that does not really reflect the authentic and life-giving components of that faith — whether it's Christianity or Judaism or Islam. Those who are claiming to represent that religious affiliation are often speaking counter to what the heart of that tradition is saying.

I think people of faith from every tradition have got to be infusing into the societal climate a more genuine understanding of their tradition, which in almost every case promotes mercy, compassion and forgiveness as a hinge pin of what they believe about the divine. I think that the major religious bodies need to really make sure that this kind of belief — the one that's feeding this divisive political climate — that it's not coming from their pulpits. We need to be just as insistent that that is a distortion of the faith and not a demonstration of it.

Q & A with Kochurani Abraham, examining new forms of religious life in an hour of need

Q & A with Sr. Rose Marie Tulacz, focusing on signs of God’s love and mercy

Q & A with Sr. Agatha Chikelue, committed to building peace in Nigeria

Q & A with Doris Baizley, who wrote a play about siblings who became 'Sisters of Peace'

Q & A with Sr. Vivian Ivantic, witness to changes in the church in her 83 years as a sister