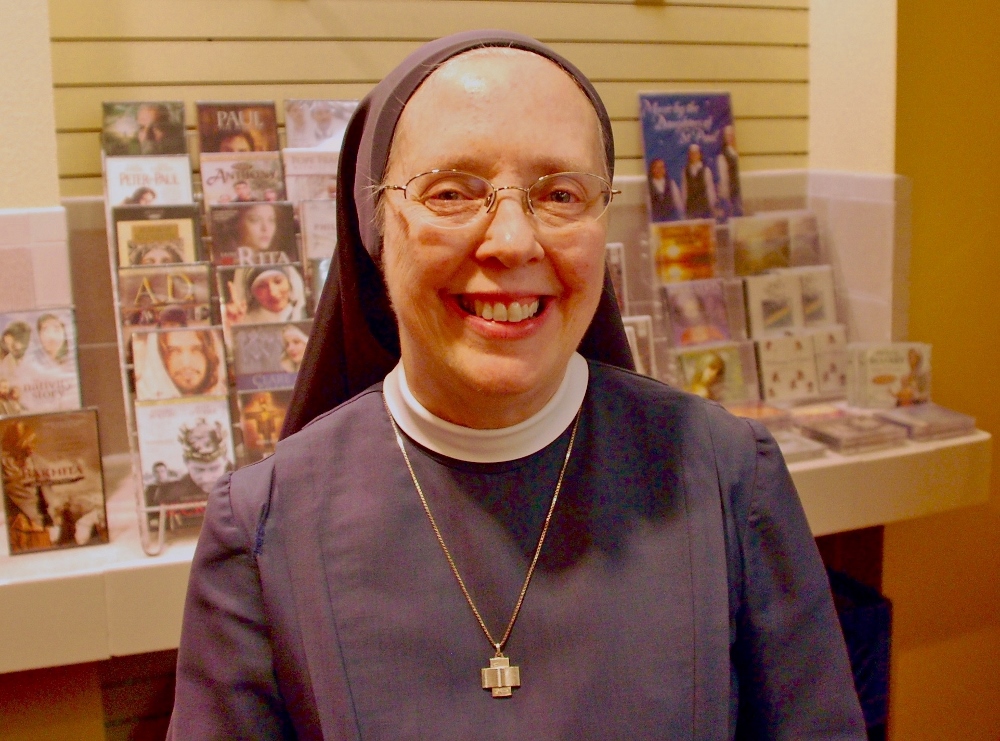 The diminutive nun in a gray-blue habit says little as the customers browse through the books and movies, but her quiet manner and small voice can't hide her bright eyes that sparkle when you do engage her in conversation.

Sr. Deborah Marie Dunevant is a Daughter of St. Paul, and it would be easy for those who aren't familiar with the congregation to make assumptions based on its conservative dress. But the congregation, celebrating its 100th year in 2015, is dedicated to communicating Christ through all forms of media. In this day and age, that means in addition to publishing books and distributing movies, they're using Twitter and other social media and creating podcasts and smartphone apps. Search Twitter for #medianuns and you'll find them doing everything from posting photos from around the world to singing on the Jumbotron at a Boston Red Sox game.

But Dunevant says it's not about the media: It's the message.

GSR: How did you end up a Daughter of St. Paul?

Dunevant: That's always the ultimate question, isn't it? When you have so many options, how do you get down to choosing just one? I used to ask older women, ‘How did you know the man you married was the one?’ And they'd say, ‘You'll know,’ which, when you're 22, must be the most vague answer ever.

When I was seriously considering become a nun, I ran into a problem. No. 1, I didn't want to teach, and No. 2, I didn't want to be a nurse. I didn't think there was much left. Then one day, I was reading Our Sunday Visitor, and there was a postage-stamp-sized ad for the Daughters of St. Paul. I mean, it was tiny. But I heard a voice say, ‘This is the one.’

And the voice said, ‘The work you do is mine.’

So I said, ‘Well, I can sit here and argue, or I can look into it.’ So I wrote to the sisters to find out about them. Even when I went to visit, I told myself I'd just try it for a couple of weeks and see — I wasn't going to be a martyr for the cause. But it fit like a glove, and 42 years later, here I am.

And so now you're a bookseller?

Yes, I work at the Daughters of St. Paul bookstore in downtown Charleston, South Carolina, but it's not about selling books. That's not the bottom line. If I just wanted to sell things, I'd sell makeup.

It's really a grace to be a Daughter of St. Paul — it's really a privilege to bring the word of God to people where they're living and know that this book, this pamphlet, or this movie is the instrument to bring them closer to his grace. It's not just a book.

One day, I was working, and an older woman called on the phone and asked if we had a medal of St. Rita. I said that yes, we do, and we also have a new movie about her life. She came in about a half-hour later and bought the movie and the medal. Weeks passed, and then she called again, and said, ‘Sister, do you remember me calling about the St. Rita medal? I'm calling back to tell you I was cured.’ She had some serious health issue. I didn't get the story the first time, and I didn't even get the whole story after, but God is working through us all the time in ways we never even know about. There are so many examples of people coming back to or getting closer to God through this work.

What else do you do?

I visit high schools because they don't know nuns. It used to be that most of the teachers in Catholic schools were sisters, and now they're not, so the students aren't exposed and don't think about vocations as an option. I might as well be an astronaut coming in; they just have no experience with it. I wish we had 40 million teaching nuns.

Q & A with Sr. Marlene Weisenbeck on collaboration in anti-trafficking work

Q & A with Sr. Bernardine Pemii, protecting children from abuse in Ghana