by Dan Stockman
Q&As
This article appears in the Mining feature series. View the full series. 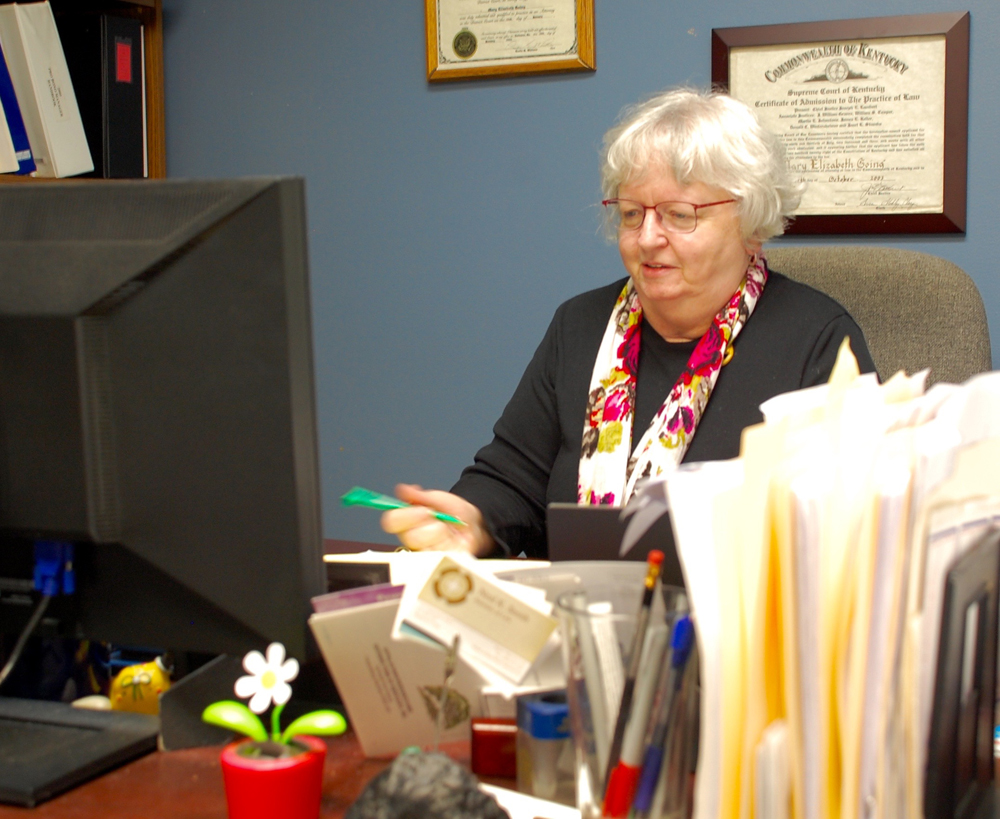 Mount Tabor Benedictine Sr. Mary Going works on a case at the Appalachian Research & Defense Fund of Kentucky in Prestonsburg, Kentucky, where she is an attorney. (GSR photo / Dan Stockman)

Prestonsburg, Kentucky — Mary Going thought the Mount Tabor Benedictine monastery in eastern Kentucky would be a nice, quiet place to study for the bar exam so she could practice law. Now, the monastery on a mountain outside Prestonsburg is home, and Going is a Benedictine sister.

As she studied amid the ridges and valleys of Appalachia, Going realized how well she fit into community life. She was also attracted by the vow of poverty and a monastic life — material things just did not seem to matter much anymore. She professed her first vows in 2010.

Disability cases are in a sort of crisis in eastern Kentucky. Hundreds of former clients of attorney Eric C. Conn face losing their disability benefits after Conn was indicted in April 2016 on charges of conspiring with a doctor and a judge to defraud the federal government of $600 million in Social Security disability claims. Conn was known in the area as "Mr. Social Security."

The clients, many of whom started receiving disability payments because of injuries sustained working in coal mining, must have their cases retried and risk not only losing their benefits, but being required to repay the money they have already received, Going said.

GSR: This sounds like another example of how people in poverty seem to have the deck stacked against them.

Going: It is. About 200 people here have lost their checks, so they don't have any income. That's a crisis here. The cases are very difficult to retry because they're very document-dependent, and some of them go back years and years. A lot of documentation has been lost or destroyed before the case can be retried.

It's an unwieldy system anyway, even for someone without disabilities. But if you can't read well or you have a psychiatric disability, and you don't have the social support of people with those kind of skills, you're just kind of stuck.

So here are these people who've been living on disability for years, and all of the sudden the government says, 'You have to re-prove your case, and if you can't, you have to pay it all back.'

As you handle these cases, have you found cases where people were getting disability who shouldn't be? With their attorney under federal indictment, it calls everything into question.

We haven't found people who are not deserving, but if you don't have the records to back it up, it doesn't matter to the government. As far as we're concerned, the clients aren't at any fault at all. And yet, you not only have to prove your current disability, but you have to go back and prove your original case wasn't fraudulent. It's almost impossible, and if you lose, you're expected to pay them back. People just don't have the money.

I don't imagine people can afford attorneys for this, can they?

No, which is why I helped put together a network of attorneys from all over the country to help out. It's really been amazing. We're also trying to get some pro se clinics going so people can file their own cases. Not only does it save money, but it also empowers people when they can do it themselves.

And with the new administration in Washington, there's fear that funding for things like legal aid will disappear. I know people say you're supposed to pull yourself up by your own bootstraps, but I worry about what happens to people that don't have boots.

Here in Floyd County, 27 percent of families are below the poverty line, and the schools' graduation rates are pretty low, so we have a population where there's not a lot of high school graduates. And with mining going away in this area, there's not a lot of other industries.

What are some of the other barriers people face?

There's no law out here that gives renters any rights. Other parts of the state have adopted a uniform code, but no city out here has adopted that. So there's no law saying landlords have to fix things in a certain amount of time or fix things at all. We had one case a few years ago, an elderly woman and her disabled sons were late with the rent, so they were evicted. They fought it but lost, and there's no redress for them. They moved into a beat-up trailer with nails coming up through the floor.

There's a lack of public transportation, so even if there were jobs, there's no way to get to them. People have to pay relatives to take them places.

There's also the attitudes against those who are poor. They appreciate the help people bring, but they don't want outsiders telling them how to live their lives. There's some real strength in the way they live. There's a priest who started a program called Neighbor to Neighbor, so that instead of having outside people come in, we have the people in the area help each other. That means a lot to them.