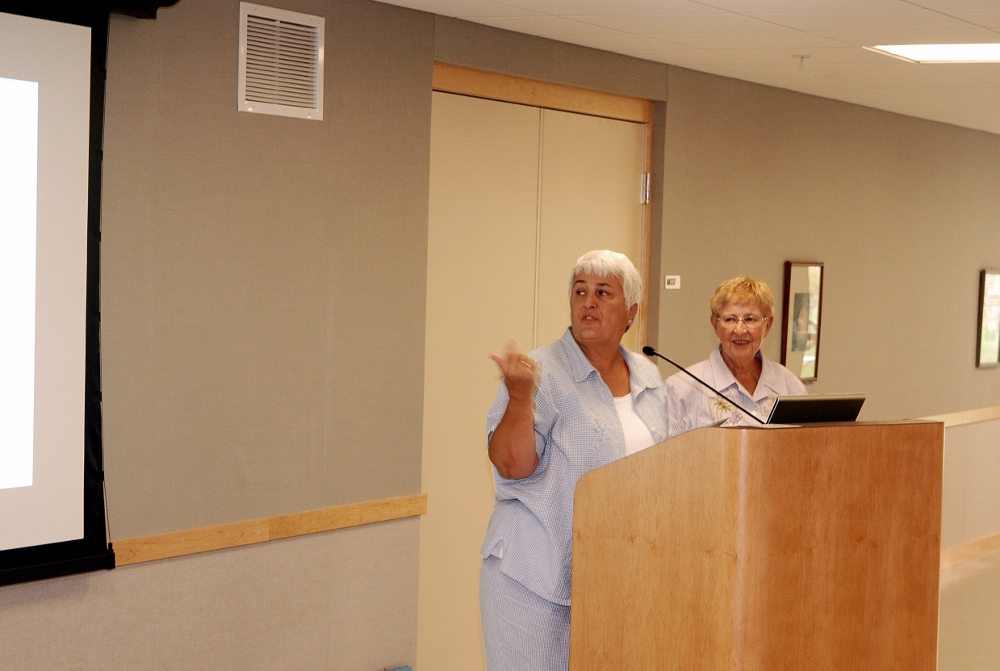 Sr. Sue Gardner, left, and Sr. Ellen Kennedy describe their mission in Manitoba, Canada, to our retired Sisters at the Dominican Life Center in Adrian, Michigan. (Courtesy of Adrian Dominicans)

Dominican Sr. Sue Gardner is not Native American, but she has had a love for native people since she was a child, and has worked closely with them for the past eight years. Now she is the director of the Native American Apostolate for the diocese of Gaylord, Michigan, and the pastoral administrator of Saint Kateri Tekakwitha Parish in Suttons Bay, Michigan, about 20 miles northwest of Traverse City. The parish, established in 1852 to minister to the spiritual needs of Native Americans, is the designated Native American parish for the diocese, and native customs are incorporated in the liturgies and prayer life, including drumming during Mass. It was originally named for the Immaculate Conception, but is now named for St. Kateri Tekakwitha, the first Native American to be named a saint.

Previously, Gardner spent six years in Canada working with First Nation Cree, most of whom had been in Indian Residential Schools where they were victims of what has been called a “cultural genocide,” as well as sexual and physical abuse.

Though some of her work has been difficult, Gardner, 69, has found that she has gotten much more in return.

How did you get started in ministering to Native Americans?

When I was in fourth grade, we went to Wisconsin to visit an uncle and aunt, and we were in Stevens Point, and I saw a Native American man just sitting on the porch of the store. I knew that he was watching what was going on around him, but he just sat there. And I wondered what he was thinking. I can still see him today; it was something that just drew me in. So I began reading about Native Americans and learning as much as I could. Later in life, once we were free of the habit, I started doing a lot of tent camping. I was spending time by lakes and in the woods and letting the beauty of nature touch my soul, and I began understanding that for Native Americans, this was part of who they are.

I taught mostly first and second grades, and then was a director of education. I had wanted to work with the Native American community when I retired, so I availed myself of any opportunity to get to know the community, spending weekends on reservations and that sort of thing. Then when I was on sabbatical, our community got a letter from a bishop in Canada, asking if there were any sisters willing to come work with the Cree. The year before that, the community had added to its mission statement that we wanted to work with the poor and work to empower women, so they invited the bishop to Adrian, Michigan, to give a presentation. Afterward I said I’d go; they didn’t want me to go alone, so another sister came out of retirement to go with me, and we spent six years there.

We were on the reserve in the middle of nowhere, so everyone knew who the non-native people were. Our mission was to prepare the community to take over leadership positions. Here [in Suttons Bay], you see the sign on the highway that says you’re at the 45th parallel [halfway between the equator and the North Pole] – there we were at the 56th parallel. In the winter, you really had to be aware of where you were going and make sure you had supplies in your car in case you got stuck or anything.

But it was a wonderful experience. We loved the people up there. They spoke Cree fluently, but they also spoke English, and we really had a bond with them; it was hard to leave. We were originally going to be there five years, but we asked for another year because we didn’t want them to feel like we were abandoning them.

It was amazing because so many had been in the boarding schools. In Canada, about 99 percent of the residential schools were run by the Catholic church, so the schools are much more connected with the church. Some people could barely look at us because of their hatred of the Catholic church. Others on the reserve, even if they didn’t go to church, were very pleasant to us, and would tell us their stories. They’d say, ‘I know in my mind I should be going to church, but I just can’t do it.’

There was one lady that for years whenever we saw her, we would say, ‘Hi, Josephine,’ but she would never respond. Then one day she came to our door in tears and said she was so tired of being angry and hurt all the time and asked if we could help. We helped her take a 21-day course called Healing Soul Pain, and it was wonderful to see the transformation in her. We loved them, just loved them.

An Adrian Dominican Sisters’ meeting for one of the community’s Northern Missions, Canada and Alaska. Sr. Sue Garner is at center, seated in blue plaid. (Courtesy of Adrian Dominicans)

And now you’re in northern Michigan, in a parish just a few hundred feet from an Ottawa and Chippewa casino. Aside from the weather being slightly less harsh, what are the differences?

The reservation has the casino, so it doesn’t have the poverty. Out west, the reservations are so poor. But there’s still the same issues – they’re still searching for healing from the boarding schools they were forced to go into. [Michigan had four Native American boarding schools, including one run by the Catholic church in nearby Harbor Springs. Many of the same abuses of the Canadian schools occurred in the United States’ schools.] You talk to them and it still brings back the tears. This apostolate is part of the attempts by the church to listen to their stories and help them heal.

This used to be an all-native parish; I was told that everybody over the age of 40 living on the reservation was probably baptized Catholic. But I was told that a tribal council member told them they had to choose to be either Catholic or their native spirituality, and many left. So now they’re trying to get back their language, culture and customs. My message is that to be Catholic, you have to do these things, you have to be baptized and take part in these sacraments, but how you live your religion in your daily life is up to you.

I try to help them understand that their native spirituality fits in perfectly with the Catholic church. But of course it’s hard for them to trust, when for so long they were told in the schools that everything they did and believed was pagan. I hope that, with the new encyclical on the environment by the pope, that people will join with native spiritual leaders in praying for the healing of the Earth.

The parish is small, and gets much smaller in the winter when all the visitors are gone and it’s almost all just Native Americans, but we have visitors that return year after year. July 14 was the Feast of St. Kateri, so we had Mass outdoors at the shrine. I had invited women from the reservation’s hand-drum group, who taught some women of the parish a water song. You always wonder how the non-native people will take something like that, but afterward they went up and thanked them. When these five women sang, it was so beautiful. Not anybody stirred. At times it seemed like the birds joined in. It was just so beautiful.

Q & A with Sr. Rose Pacatte on the intersection of theology and film

Q & A with Sr. Gerardine Mueller, blessed to be an artist at 96

Q & A with Sr. Tariro Chimanyiwa