Q & A with Srs. Michaela Gotangco and Crescencia Lucero, fighting for justice in the Philippines 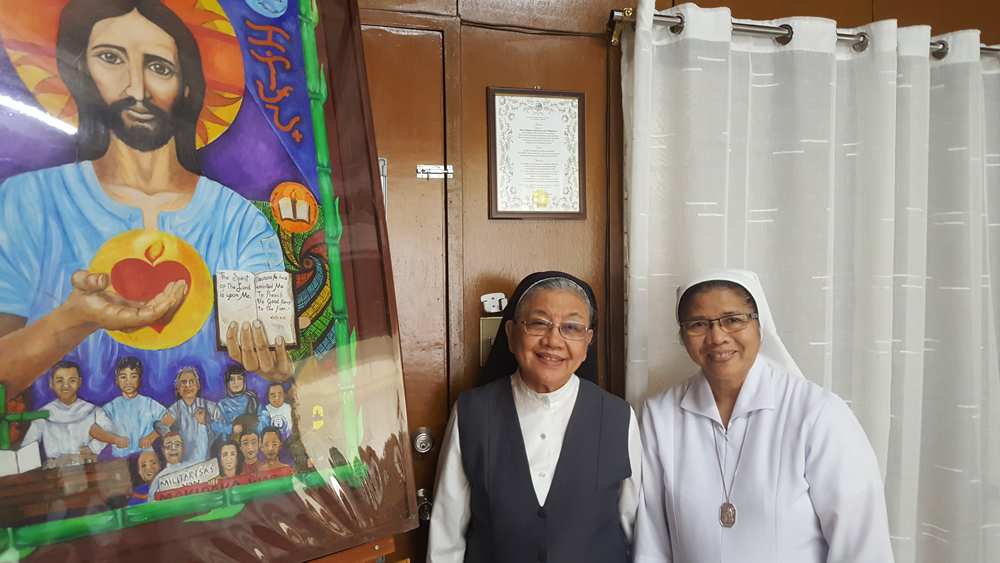 Quezon City, Philippines — Since Rodrigo Duterte was inaugurated as president of the Philippines on June 30 and declared a war on drugs, more than 3,100 people have been killed either by police or vigilante groups.

Religious congregations, individual bishops and the Catholic Bishops' Conference of the Philippines have condemned the lack of due process and violation of human rights. The European Parliament has issued a resolution, and the United Nations High Commissioner for Human Rights cited the situation in a Sept. 13 speech to open the 33rd session of the Human Rights Council.

On September 21 — the International Day of Peace and the anniversary of the declaration of martial law in the Philippines in 1972 — a Mass, program and candlelight vigil are being planned in Manila. The event will protest what's being called a "culture of fear" that the extrajudicial killings have created and will promote the dignity of human life.

Sr. Michaela Gotangco, a Canossian sister and executive secretary of the Association of Major Religious Superiors in the Philippines (AMRSP), and Sr. Crescencia Lucero of the Franciscan Sisters of the Immaculate Conception of the Holy Mother of God, head of AMRSP's Justice, Peace and Integrity of Creation Commission (JPICC), talked to Global Sisters Report about the work of the organization, their stance on the killings and coordinating this event.

AMRSP includes about 266 congregations of women religious and 90 congregations of men religious. Born out of the Second Vatican Council, the organization addresses pressing social issues and often acts as a coordinator and convener of joint actions by congregations, lay groups and nongovernmental organizations on issues including labor rights, human trafficking, rights of indigenous people and people who live in poverty in urban areas.

"What is beautiful from my experience right now is not only the sisters who spearhead these works on justice and peace, but we have many organized groups of human rights and networks," Gotangco said. "Sisters can share with us the different networks we have in which AMRSP is a network and JPICC is a very strong network."

GSR: How does that network help? How does it work?

Lucero: When there is a burning issue — for example, now because of all these extrajudicial killings — AMRSP can be one of the lead conveners and in fact is one of the lead conveners. Sept. 21 is the International Day of Peace and at the same time is the anniversary of the declaration of martial law, and we're coming up with a kind of mobilization — we hope it will be big — really to register our call for peace and also for the respect for life, life with dignity. So we're projecting issues like 'stop the killings,' 'life, not guns,' 'no to martial law,' 'never again martial law.'

Are there other examples of how this network has come together?

Lucero: On October 4 of last year, we had the big ecological walk for justice, and some days before the Paris meetings, we had a March for Climate Justice, and we were able to mobilize more than 5,000. On the walk for climate justice, we had more coordinated [in central and southern Philippines]. We had more than 10,000.

Lucero: Ever since the martial law years [1972-1981], AMRSP has opened its convents, churches, seminaries as sanctuaries for those whose lives are at risk. We even have a desk here at AMRSP that facilitates that: different congregations who take in these people. Sometimes, it's only one or two or a family or an extended family, even the grandparents. It could be days, weeks, months, years even, and it's also the generosity of the different congregations because they take care of not only the place, but also the food and other needs and the status of the children if the case goes on long. [The most recent case was in 2008.]

Please tell us more about the current extrajudicial killings under the new president.

Lucero: One of the big campaigns in the election was to stop all drugs. It's a war on drugs and criminals. Many people say they agreed with the campaign about the war on drugs because it's really destroying the social fiber of families and youth and is really becoming a menace. So people said, 'At last, something is being done.'

But then when the killings started and those who were targeted were the small people, the poor, especially in the urban poor communities — there's no more distinction between drug pushers and drug users. The drug pushers are also users, but most of those being killed now are the users who are pushed into it because of the situation with poverty. If you look into the families and communities of those who are most victimized, it's the poor ones.

Some of those who are being arrested are provoked into fighting and are killed immediately because police say it is self-defense. It really is shoot to kill because [there is] just one bullet — in some cases in the chest or in the back. So it's really shoot to kill. So they are being provoked so [police] have justification to shoot, and there are several documented cases like that.

What has been the response by the religious community?

Lucero: It is a very strong protest against it. If you read the recent statement of the [bishops' conference], it was quite strong, using the symbolism of the tears and the pain.

They [Duterte and the police] have all these long lists [of suspected drug pushers and users] so people are really paralyzed. The police now knock on the doors of those even in the villages and middle-class sectors. It's really creating an atmosphere of fear.

Gotangco: And even those who surrender in prisons. They end up jam-packed like sardines in a can. They don't even have a place to sleep on.

Lucero: Even before this happened, [prisons] were already overcrowded, and especially now when it's the rainy season and they have no place to sleep. But this time, it's even more jam-packed. So many get sick, some die.

Is one of the criticisms of the campaign that there is little or no treatment available?

Lucero: They say they are building a mega-rehabilitation center, but it's still in the making. Even if those buildings are ready, what about the trained personnel for this, and how many do you need? And we don't have them.

Has the church gotten into any drug rehab efforts or treatments?

Lucero: There were one or two parishes, and there are a few other groups. We were referring them to some centers, but they are quite expensive.

Do you see this as a future need?

Lucero: It's a new ministry, actually.

[Gail DeGeorge is editor of Global Sisters Report. Her email address is gdegeorge@ncronline.org. Charity Durano is a correspondent for GSR based in the Philippines.]

Q&As | Q & A with Srs. Michaela Gotangco and Crescencia Lucero, fighting for justice in the Philippines