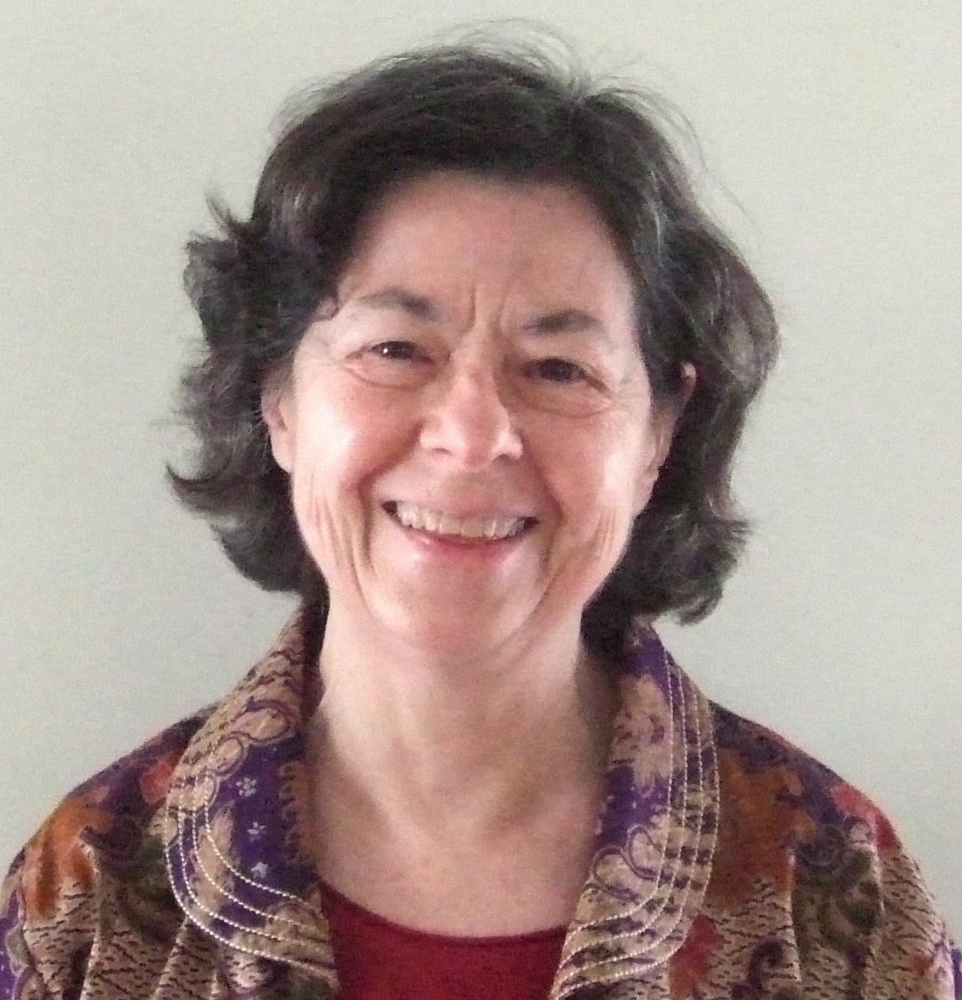 Her 41 years as an Ursuline of Cincinnati came to an end in 1998, after her community "embarked on a quest for how God was calling us into the future," she said. One dimension of that was to explore the original charism and life of their founder, St. Angela Merici, which included a trip to her birthplace in Italy.

"We were always well aware that St. Angela had originally founded something that was the prototype of the secular institutes," Durkin said, adding that her community contemplated the ways in which they could pursue St. Angela's original way of life in the United States. A year later, after a personal retreat, Durkin and her friend Kathleen Hallinan began working toward introducing the Company of St. Ursula in the United States.

"We are single lay women, and we live however single lay women live in a given culture or country, and that varies widely from continent to continent," she said. "That's part of the nature of secular institutes, to be incarnated in whatever part of the world they're in."

Members of secular institutes in the United States are financially independent and pursue the occupation of their choice. Durkin, who lives in Cincinnati and is a writer and retired teacher, is one of five members in the United States and one of more than 800 worldwide. Spread around the country, members of the company try to meet at least twice a year, with Skype sessions and individual visits in between.

In a conversation with Global Sisters Report, Durkin talks about what it means to be a part of secular consecrated life and about the misconceptions of that lifestyle.

GSR: How do you live out your charism within an independent lifestyle?

Durkin: Religious institutes all have their own charisms, and they usually take the shape of ministries, which would be acts of service, church-related or religion-related. For us, in secular institutes, there's a similar wide range of charisms, but it's not usually manifested in external works. It might be more in a spirituality that we bring in to our marketplace situation.

We have similar varieties in secular consecrated life, so speaking as a member of the Company of St. Ursula, we really find that our center point of life is our relationship with Christ. We see our role in our personal lives and the world as carrying that love into whatever context — such as a home health aide going into some old person's house, or if it's our member in Toronto who's a cook in a Chrysler factory.

It's more like we hope to carry the good news of God's love into that place. There's no part of our lives where that's not a factor. You're always able to do that. It's not so much a work or an activity.

How has being in a secular institute affected your spirituality or sense of mission?

I don't think it has changed or affected my central relationship with Christ. That's been the center point of my life since before I was a teenager, so I'm living that same relationship in a different context. I was a teacher for many years, and I loved it, so I definitely lived out the 'flowing outward' dimension of that relationship with my students and also very much with my sisters in community.

Now, I would say that I live with a heightened consciousness of living that is very much within the context of the world. Maybe it's less focused in particular activities and groups of people, which would be my educational mission and religious community, and more broadly focused on the entire surroundings — people and work — that I'm in. 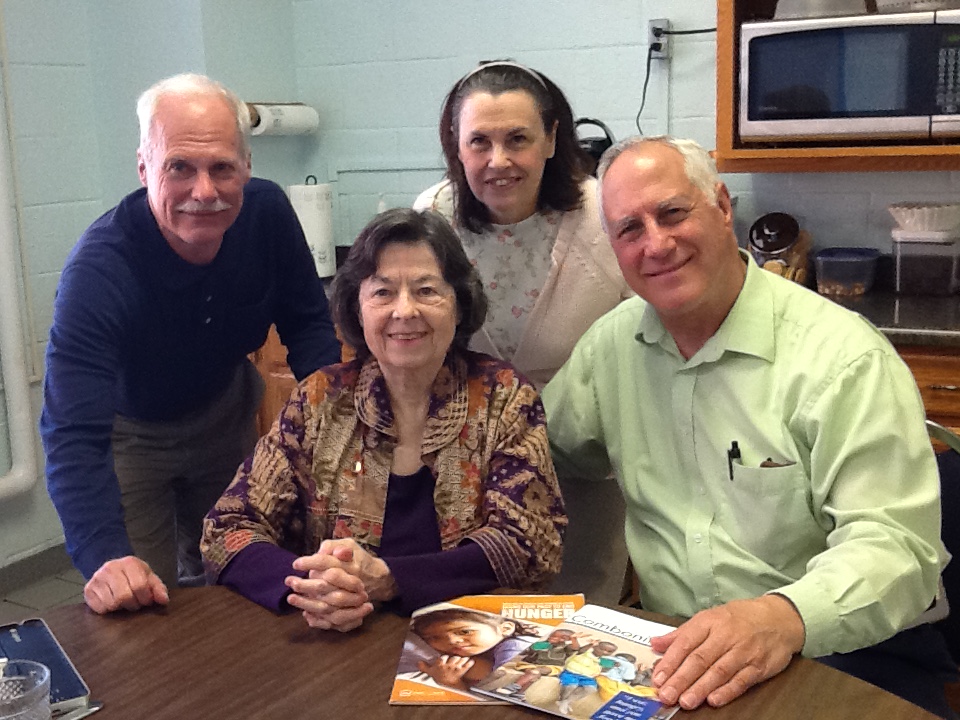 Mary-Cabrini Durkin, front, poses with members of a planning group for Bread for the World's Cincinnati-area chapter. (Provided photo)

How do you live out your vows of poverty and obedience? Is there still someone to report to despite living independently?

Every person in every form of consecrated life, no matter what it is — religious life, monastic life, contemplative life, secular institute life — makes a vow or promise according to the rule and constitution of a particular institute. That's part of the formula. And so we do the same thing: make our consecration to live according to the rule of St. Angela and the constitutions of the Company of St. Ursula.

Gospel values are not religious life values, originally — Jesus was not talking to nuns or monks, he was just talking to folks when he proposed these various kinds of ideals — so we do them according to the mode of single lay persons in the world.

What does that mean? Take obedience and poverty: in religious and monastic life, there are so many areas where both life and ministry overlap, that the modes of which you have to listen together for God's guidance are many: to each other, to authority, within your group. For us, there are few areas in which our lives and work overlap, so there are fewer of those guidelines about how to practice. However, we are given, I think, a Gospel-infused inspiration. In terms of obedience, it is primarily a deep, deep commitment toward that following of God's will as best you can hear it and discern it.

We do help each other figure that out, but nobody is going to tell them to do this or that. Presumably we in good will bring major decisions in our lives to discuss with our leadership, and then we make our responsible decisions according to how the Spirit guides us. It's not very regulated or constricted; it's open-ended.

In terms of poverty, when we have to make big decisions related to material resources, we consult and then have to make our own decisions about it. Of course, we're not working with community's money; it's with what we've earned.

The idea isn't, 'Oh, I get to do my thing,' it's that we're responsible to God for that rather than to other members of the community with whom we share a purse (which we don't).

What are other misconceptions of this lifestyle?

The concept of being free-floating. I often say that our sisterhood is an essential component of our vocation. Just the knowledge that you have people who share the same meaning of your life and practices that put that meaning into practice in your life around the world, that's very supportive and encouraging. Whether you're talking to someone on the phone or going to an international meeting or having a formation conference, that sharing on a very deep level to what's most intrinsic to oneself is very unifying and supporting.

The word secular — a lot of people in the U.S. are accustomed to thinking 'secularism,' an attitude that only the observable world has reality or significance. So why are we called a secular institute? Are we irreligious? No, it just means ordinary life. We're just living in the context of ordinary life. A lot of people are allergic to the word 'secular.'

Why do you not use 'Sister' as a title?

We call one another sisters, so that's certainly a loving and familiar relationship there, and that part of that term is very real for us, but why do we not use it in our names or title?

For all secular institutes, I think, the Gospel metaphors of salt and yeast are very meaningful. We're called to be a Gospel flavoring in the world, that we're called as yeast to bring the Gospel rising to the world in which we live, and the thing about both salt and yeast is that they're invisible. They imbue the massive dough without being noticeable individually. We really are laypeople. We really are just like everybody around us, as far as we're concerned, and we don't want to adopt the external symbols that would indicate or suggest any difference or separation.

Religious Life | Q & A with Mary-Cabrini Durkin, carrying God's love into the world

Study shows most in the US believe women religious are trustworthy

It's traditions, not religious life