Tweeting to POTUS every day: Q & A with Sr. Susan Rose Francois 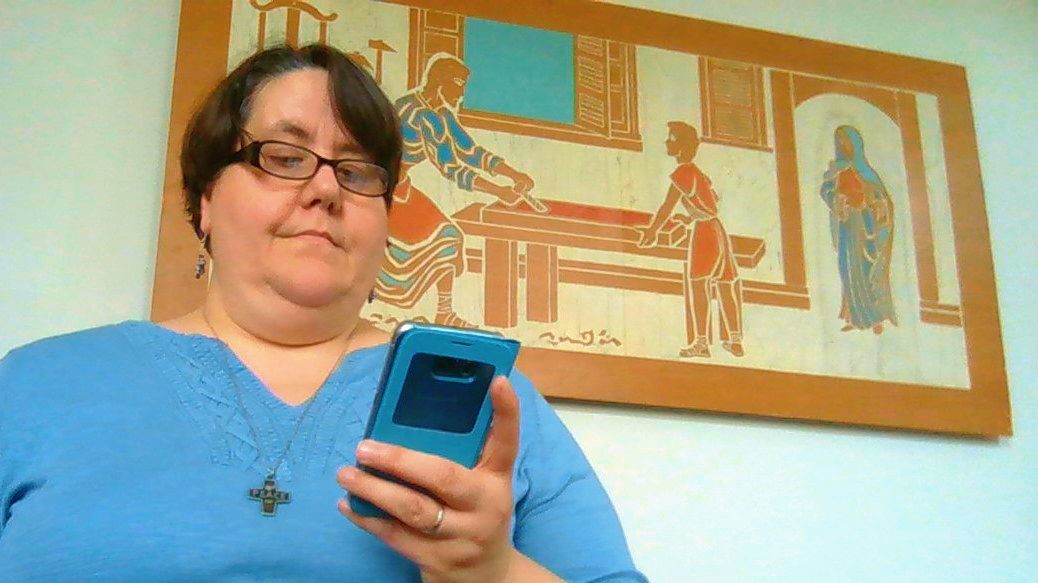 St. Joseph Sr. Susan Rose Francois wanted to respond in a positive way to the divisiveness and angry rhetoric of President Trump, so she tweets a prayer to him every day. (Provided photo)

It was Jan. 20, 2017, and Sr. Susan Rose Francois, a member of the Congregation Leadership Team for the Sisters of St. Joseph of Peace, believed she needed to respond in some way to the presidency of Donald Trump.

By then, Francois had had a Twitter account — @susanfrancois — for nearly a decade and, knowing the president is a frequent user of the social media service, she decided to tweet a prayer to him every day.

Now, almost two years later, Trump is still president and Francois is still tweeting her prayers, which usually focus on leadership, healing divisions and choosing goodness over evil. She tweets a prayer every day except when she is on retreat and during Holy Week.

Since Francois is a sister, it should not be surprising that her prayers focus on healing and choosing to be good, but the idea that spreading those principles can also be a form of protest fits with her background: Francois was a Bernardin Scholar at Catholic Theological Union where she majored in moral theology, studying the ethic of resistance — specifically the response of ordinary people to the Holocaust and the Nazi regime.

Francois is a frequent columnist for Global Sisters Report's Horizons feature and publishes a blog, At the Corner of Susan and St. Joseph.

GSR: How did you get started with the project? And how difficult has it been to keep going?

Francois: It's actually one of the most difficult spiritual practices I've ever had, in part because it's a public commitment. It all looks so simple now, but at the time, the administration was making all these crazy claims, and then giving crazy responses to refutations of those claims, and I need to find a positive, non-violent response. I don't have a large Twitter following [1,003 followers], but it was important to me that it be public, engaged and responding in a non-violent way. So I thought, "He tweets, I'm going to tweet a prayer to him every day."

I think in the beginning, it was more half-hearted, in a way. But as it continued, it moved more to praying for all leaders to be working for the common good. That's especially important now that it seems our president is lashing out in anger all the time.

When I was a new sister, there were two sisters at the convent where I lived who every day would pray for the president and the Congress. When they died, I took that prayer up, so in a way this is an outgrowth of that. There's a faithful witness and a prophetic witness in that.

One thing that surprised me was how people responded — friends and people I don't know would thank me. Many people who are atheist have thanked me. I was surprised, but it's a reminder that, no matter how full of vitriol things get, we're all human. And no matter what you think of the president, he has a lot of responsibility on his hands. He has a lot of power, but there's a lot of things he has no power over, too, and I think all leaders need prayer.

No matter what we think, we are in a democracy and he is the sworn-in president of the United States of America. We are a nation with a lot of responsibilities and that falls to all the citizens of the country. We have surrounded ourselves in little bubbles of like-minded people, and we need to somehow break through those barriers or we're going to be in big trouble. I try to include that idea in my tweets, too, but I don't get much response to those ones.

So the prayers are as much about all of us as they are about the president?

Yes, I'm also worried about the tenor of our conversations and the lack of civil discourse. And you can't try to change others if you won't change yourself. Are we willing to accept that we all are part of a racist society and we're all contributing to it with our words or lack of words or our actions or lack of actions? Are we willing to own up to our own racism? There's a lot of prejudice in our society and our culture right now and it's not all just overtly racist statements.

You are in congregational leadership and many of your tweeted prayers are about leadership issues. Has doing this changed how you view leadership?

There is something to reflecting, not only on what's on your own agenda, but also the impact you have on something bigger. We all have levels of leadership in our lives, but for those in actual positions of designated authority, there's that responsibility to think about others first.

This project has definitely given me a different perspective, to step back and actively think about what it means to be a leader.

I committed to doing this, so I will be doing it every day that President Trump is president of this country. That's not the easiest thing to do, but it is a practice that's good, even if sometimes it's not until 10 at night that I get to tweet. There's something to a public commitment to staying engaged and not turning away. We have faith in God, but that doesn't mean we don't need to show up, and this is one way I'm showing up.

Do you think Trump reads them?

I have no illusions that he reads them. In fact, I'm writing to his official White House account [@potus], the public account that is archived, not his personal account [@realDonaldTrump], because it's more important that a Catholic sister be on the record than whether or not he ever sees it.

Q&As | Tweeting to POTUS every day: Q & A with Sr. Susan Rose Francois

Q & A with Sr. Judith Moore, bringing together sisters in the South Pacific