An icon to contemplate this Lent 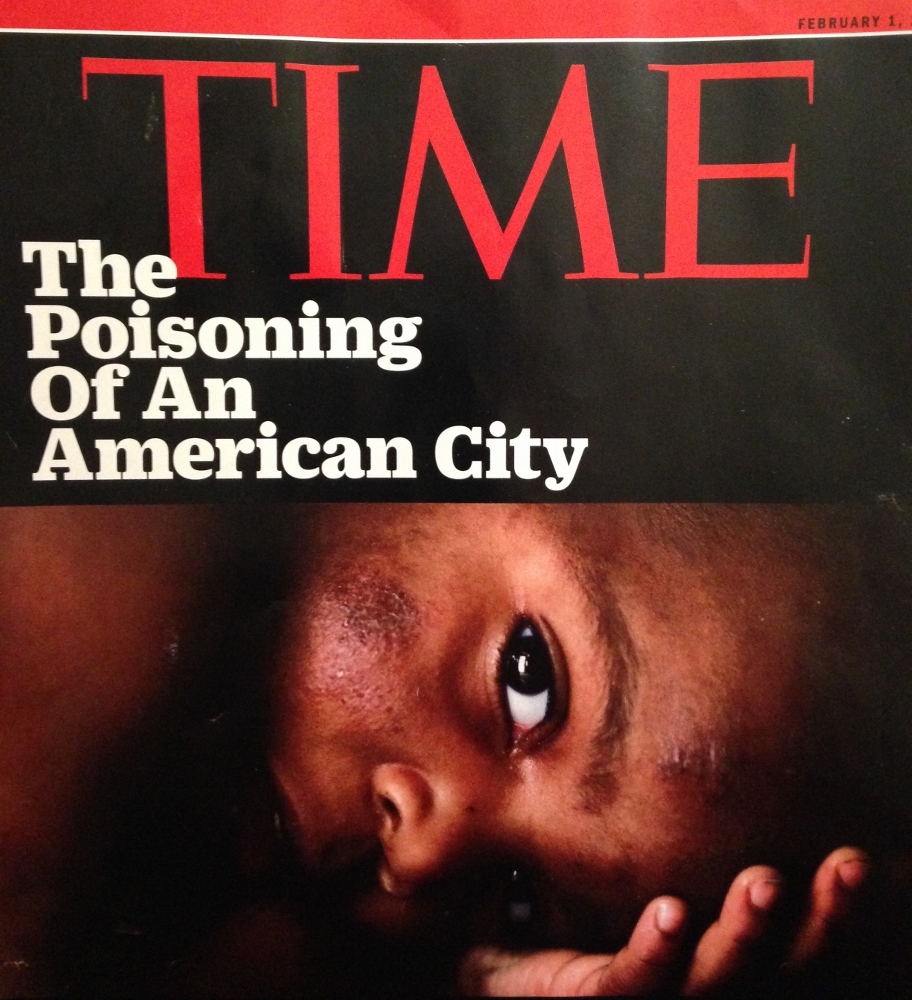 Sincere Smith, 2, pictured on the cover of the Feb. 1, 2016, issue of TIME magazine; the cover story is about the Flint, Mich., water crisis. (Cover photo by Regina H. Boone of the Detroit Free Press / magazine photo Nancy Sylvester)

I first saw the child in the Detroit Free Press as the news was breaking regarding the Flint, Michigan, water crisis. His face wouldn't leave me. I placed his picture where I pray so I could contemplate it.

Then the February 1 issue of TIME magazine had that picture on its cover. His face with the caption —The Poisoning of an American City — has become an icon to me of what happens when we forget the human connections with nature and make economics the highest priority in decision making.

Religious icons are sacred, holding an energy that is communicated to the observer. They reveal much more than what is depicted.

Accompany me as I share what was revealed to me as I prayed with this icon.

Look at his brown eyes. I see him peering out at me, at all of us who are looking. I see inquiring eyes asking us — what is my future? What is our future?

I believe he asks this for the untold numbers of children affected by drinking the water, which was contaminated by lead in this city of 99,000 residents. Lead is a neurotoxin that once inside the body damages or destroys the cells. It is particularly dangerous to children under 6 as the lead can permanently disrupt growing brain connections, resulting in decreased intelligence, learning disabilities and behavior problems. And lead stays in the bones for years to come.

His name is Sincere Smith. The definition of "sincere" is "free from pretense or deceit." His questions about the future are without deceit, and he asks them not just for himself but for all the children in our major cities. Throughout our country a blatant disregard for the environmental consequences of industrialization creates life-threatening conditions for too many of us. I see in his eyes a desire to know whether or not, we, the adults, believe that he has the right to grow up into his full potential with good health and with access to clean water, clean air and nutritious food.

Look at where his brown skin is irritated by its reaction to the poisoned water. I wonder how many persons of color are suffering disproportionately from what is happening?

Flint is a predominately African-American city with 40 percent of people living in poverty. They do not have the political or economic clout to influence the governor or state legislature to anticipate such disasters and prevent them from happening. For the decision makers the health of the people of Flint wasn't worth the $80 to $100 a day the State of Michigan would have had to pay to add the necessary chemicals to prevent the lead from leaching into the water.

As I pray with this reality, the question that arises in me is stark: "Could this situation have happened in any of the wealthy and predominately white communities in and around Flint?" Is the Flint water crisis another example as to why the question is asked: Do Black Lives Matter? 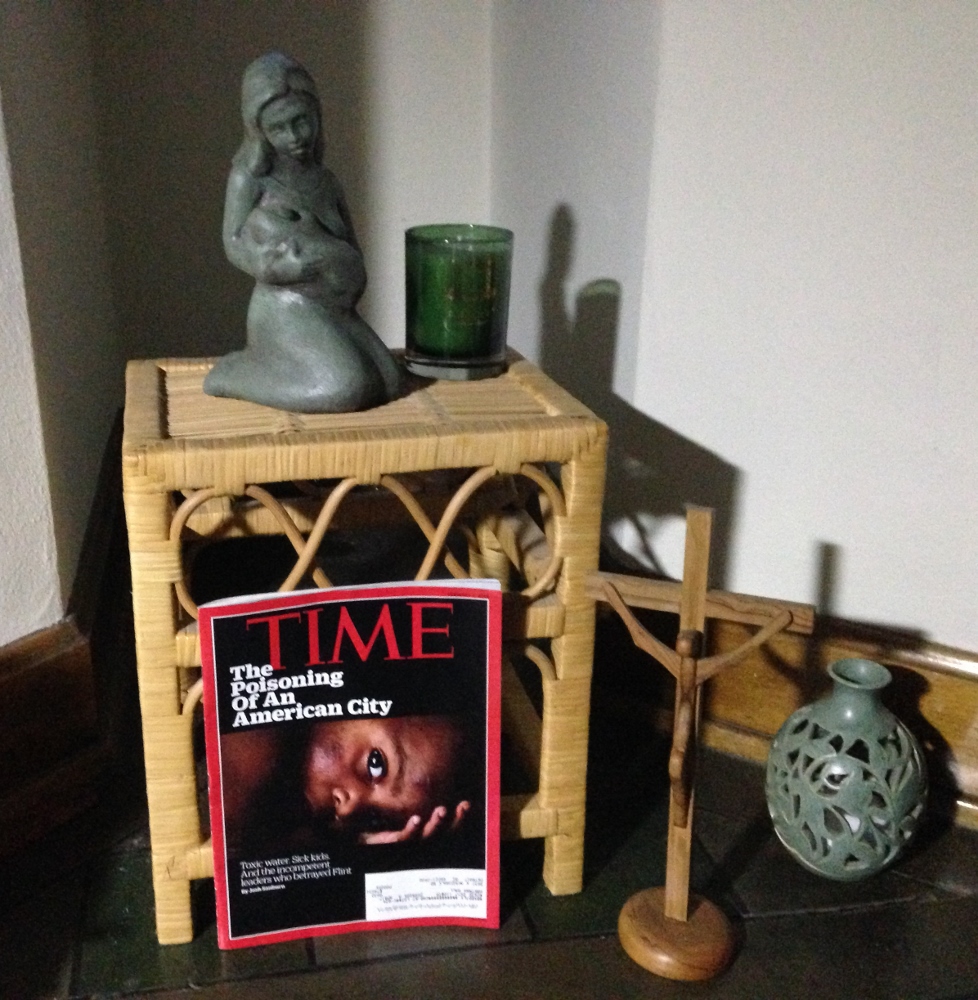 An icon to contemplate. (Nancy Sylvester)

The icon invites me to reflect on the mindset of those of us who are privileged in our society. When we read about this and other similar situations, we too often try to justify the situation. We hear:

Well, the city was in dire straits. They weren't able to govern themselves so they had to have a state-appointed emergency manager. What else could he have done as he tried to dig them out of their multi-million-dollar debt? They may be sick, but these people are probably exposed to other sources of lead not just the water. So many of them are unemployed so they aren't contributing to the city or state economy. We can only bail them out so far.

When faced with a situation that seems horrific, we want to justify our actions. We want to give some rationale to those who made the decisions rather than ask some harder questions, which uncover a worldview that values some people over others and the wants of the few over the needs of the many.

Pray the caption, The Poisoning of an American City. When I prayed this I immediately felt the impact of deliberate human action jeopardizing not only Sincere's future but also the future of the whole Earth community.

The Flint situation is not isolated. Since the beginning of industrialization, there has been a growing disconnect between human life and nature and our natural resources. We have continued to privilege the needs of business regardless of its toll on our natural resources. We are blind to how polluted rivers, poor air quality, and contaminated soil are intimately connected to the health and wellbeing of human life. We let business take risks that gamble away any responsibility or cost for environmental or human suffering. The decisions to poison Flint were driven by current-year budget projections and the need to make cuts. The result is a staggering bill for generations to come for the health care and social services needed to address the human costs of poisoning people.

In the encyclical Laudato Si', Pope Francis speaks to the dominance of the "technocratic paradigm" within the industrialized world, where the economy accepts every advance in technology with a view to profit, without concern for its potential negative impact. (109) Little concern is given for the costs of production when they effect the desertification of land, harm done to biodiversity, or increased pollution. (195) He calls us to a different way of looking at things, a way of thinking, policies, an educational program, a lifestyle and a spirituality which together generate resistance to the assault of the technocratic paradigm. (111)

We have entered the season of Lent. It is a time of repentance, of metanoia, of turning around. Perhaps Sincere Smith could accompany us this Lent. Let this photo serve as an icon. Pray with it and see what it reveals to you. May it open our hearts to the conversion we need to transform our current paradigm. When Easter arrives, may we be free enough to look directly into Sincere's eyes and acknowledge that his future, our future and the future of our planet are all one.

[Nancy Sylvester, IHM, is founder and director of the Institute for Communal Contemplation and Dialogue. She served in leadership of her own religious community, the Sister Servants of the Immaculate Heart of Mary, Monroe, Michigan as well as in the Presidency of the Leadership Conference of Women Religious. Prior to that she was National Coordinator of NETWORK, the national Catholic social justice lobby.]

Social Justice | An icon to contemplate this Lent

In rural Kenya, a path to adulthood without female genital mutilation