"Tell anyone who is alone or afraid to come to St. Bridget," was the invitation extended by Sister of Charity of the Blessed Virgin Mary Mary McCauley, as ICE (Immigration and Customs Enforcement) agents rained down on Postville Iowa on May 12, 2008. At least 389 workers were arrested by ICE at the Agriprocessors plant, a kosher slaughter house and packing plant a few blocks from St. Bridget Catholic Church.

One can only imagine the fright, terror, confusion and grief of the community in this small town of about 2,000 residents. Like Jesus' followers after his arrest, conviction and execution, feeling alone and afraid were very real emotions.

Where does one go when that happens? To community, to be with others to share the pain, the grief, the confusion, the doubt, the hope for something better — to find the courage to move past the event and move on to new life.

Ten years later, on May 11, 2018, more than 200 people from around the country gathered at St. Bridget for a prayer service and rally. No longer alone, we have learned anew the value of community in fighting the attacks on our immigrant sisters and brothers. However, we admit to still being confused and afraid of what might happen next in this anti-immigrant, anti-refugee, "throw them all out" climate of 2018. Send us your Spirit, O God!

The readings for the Feast of Pentecost call us to communication, to celebrate the common good and to be community. They offer us a path to "reMember" who we are, how we should be together and they embolden us to be sent forth in mercy and peace.

The first reading from Acts 2:1-11 is a sound and light show, a cacophony of tongues and voices. "All were filled with Holy Spirit." Amidst the confusion, the noise, the various languages, the question arises, "How is it that each of us hears them in our native tongue?"

What enables us to hear? How do we listen? Is it only with our ears that we hear? Is it with our open hearts and minds that we are able to receive the message of the "other" and identify with their longings as human beings on our one fragile home, planet Earth?

Was it the speaker who spoke the words in one's language, or was it the receiver who was so attuned to the message that the words did not matter? Message received. Copy that. Have you had the chance to listen to the victims of our failed immigration policy?

"All of us have been given to drink of the one Spirit" (1Corinthians 12:13): The second reading affirms the marvelous interdependence of God's creation, different gifts, but the same Spirit. "To each person the manifestation of the Spirit is given for the common good." During the past 10 years, have you had the chance to celebrate the richness of our diversity and its untapped potential, both for our nation and for those seeking citizenship and asylum within our borders? Send us your Spirit, O God! Let us seek out ways to become more aware of our oneness and give us hearts and ears to listen and share the stories we drink in. Celebrating the common good — can we drink to that?

The Gospel from John finds the disciples locked up and afraid. Who shows up? Jesus! "Peace be with you" is his twice repeated message (John 20:19-23). He showed the wounds in his hand and in his side. In spite of the suffering, the message was still one of peace, and the disciples rejoiced.

Jesus breathed on them and said, "Receive the Holy Spirit." Jesus then speaks of the power to forgive sins, to show mercy, to acknowledge human frailty and human failure and to say, "You are forgiven." You get another chance to try to get it right. It is only in community that we can be forgiven and have the power to forgive — to show mercy and to acknowledge our need for God's mercy.

Reflecting back on the past 10 years, we were summoned to renew our efforts for just and compassionate immigration reform.

"Why do they hate us so much?" Sr. Mary McCauley quoted immigrants with whom she has worked in Postville. What is it in the U.S. American culture that feels that immigrants are not worthy of our love and respect as members of the human family?

A Jewish rabbi reminded us that 36 times in the Hebrew Scriptures there are admonitions against treating the stranger unfairly and unjustly.

A young woman shared the story of her parents coming from Somalia in the mid-1990s with nothing. Given a chance, they built a life and family in Postville. An older gentleman, born a few houses down from the church, spoke of living in Postville with the attitude of welcoming diverse populations over many decades in this remote corner of Iowa.

The Catholic Bishop of Dubuque invited us to weep so that our hearts, like the parched earth in the area, could be softened to receive the seeds for new life. Weep for the lack of immigration reform and the increased anger and hatred of immigrants that is so prevalent in the discourse of today. Weep for the lack of empathy and knowledge of the suffering immigrants endure due to the harsh enforcement of immigration laws.

On Feb. 27, 2018, which was designated a Catholic day of action for Dreamers, only 50,000 Catholics called Congress to ask for immigration reform. Weep for the suffering caused by tearing families apart; for not allowing those arrested their due process rights and remedies before the immigration service or immigration court.

It felt like the whole world was weeping as we reached the noonday. With the grey sky, the walls of water splashing down in the 50-degree weather, it was decided that the rally would be held inside the church.

Signs suddenly appeared from under the pews, identifying organizations and aspirations for celebrating diversity. We practiced chants: "Representation, not deportation." "Immigration Reform — right now!" We recommitted ourselves in community to continue our efforts for just and compassionate immigration reform and care of migrants and refugees.

The promise of Pentecost, to have the Spirit present at all times, takes on a new meaning. We have the joy of the presence and power of God in the midst of the sufferings and struggles.

One of my favorite signs was: "We are One Family!! From Every Nation Under the Sun." However, we also know that God is present in the clouds.

As we drove home through the grey and the rain, which lasted throughout the whole weekend, I pondered the quote from Isaiah 55:10:

For as the rain and snow come down from heaven and do not return there until they have watered the earth, making it spring forth and sprout, giving seed to the sower and bread to the eater, so shall my word be that goes out from my mouth; it shall not return to me empty, but it shall accomplish that which I purpose and succeed in the thing for which I sent it.

Send us your Spirit, O God. Thanks for giving us another chance together.

[Bernadine Karge is a Dominican Sister of Sinsinawa, Wisconsin, and an immigration lawyer in Chicago.] 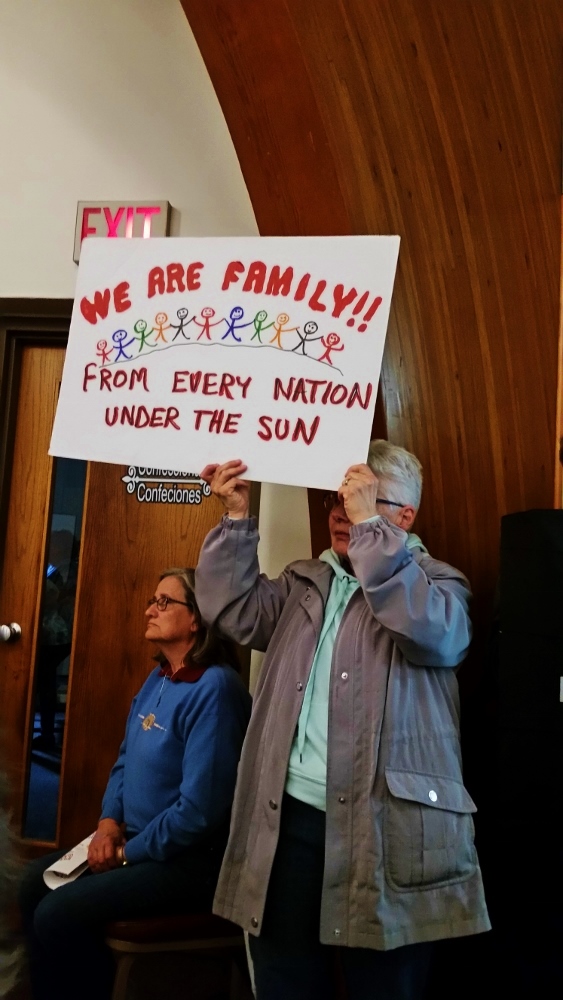 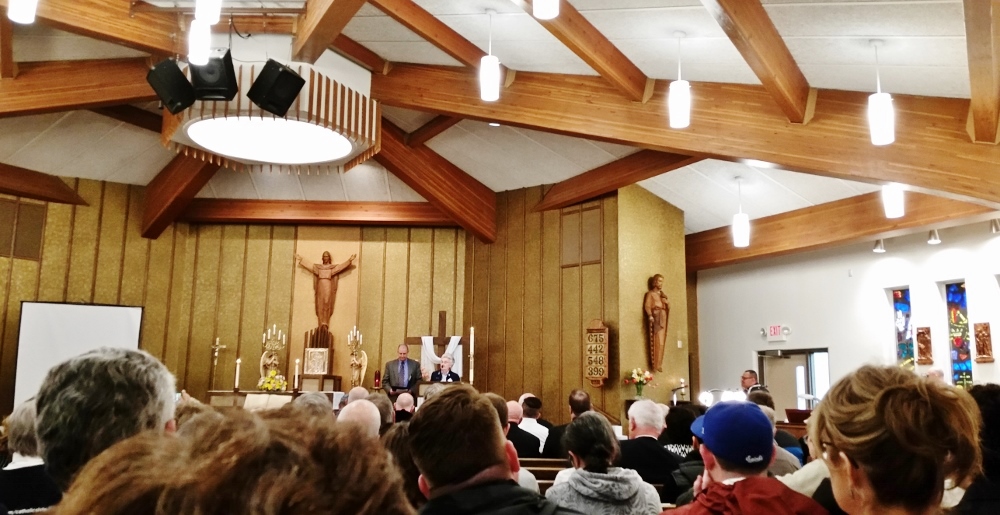 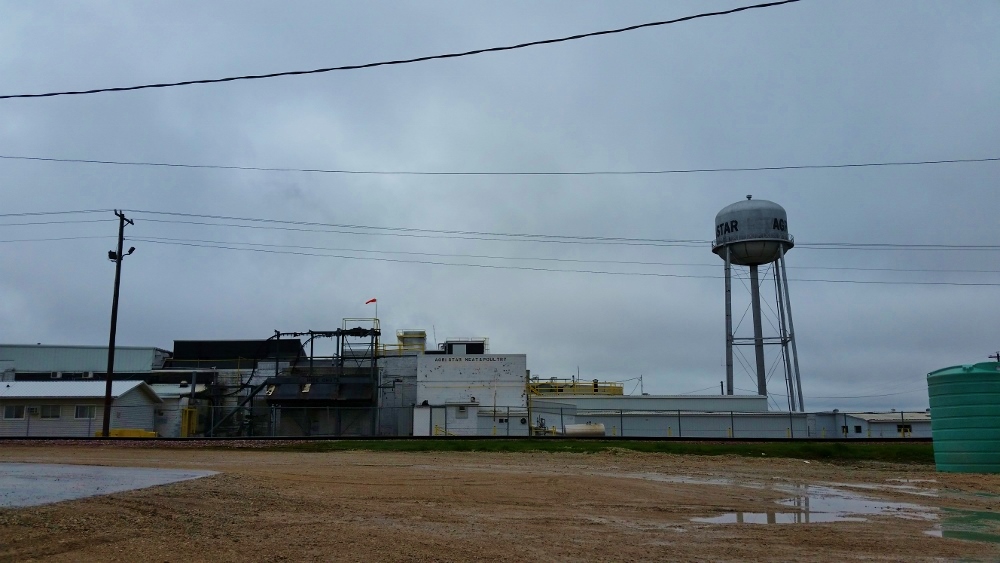 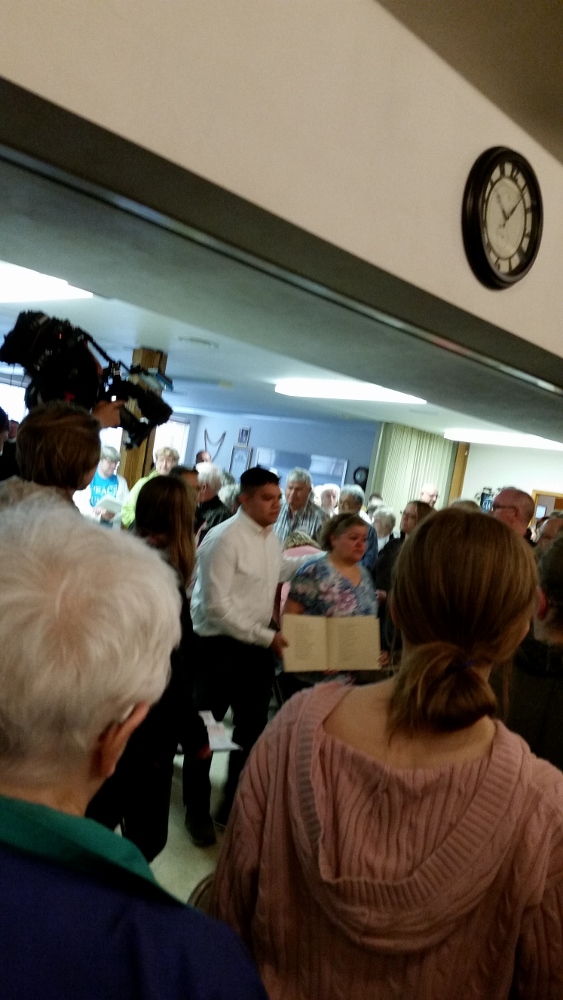