Cross out passive, change it to active 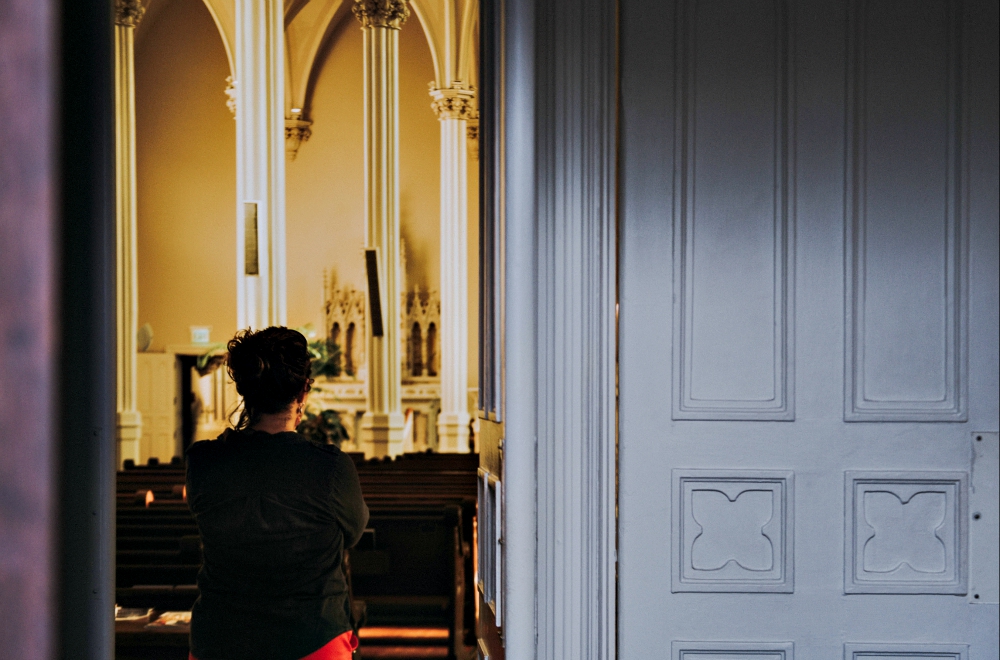 Note: Nov. 25 has been designated by the United Nations as the International Day for the Elimination of Violence Against Women.

We are at a seismic turning point in how we understand our humanness, male and female. "Boys will be boys" is no longer an excuse for behavior that denigrates, objectifies, demeans women in church or state. "Father" is no longer an unquestioned moral authority.

It is time to consciously evaluate our postures, our small-"t" traditions, our rules and practices, and challenge those that fail to recognize women as full human beings. If we do not, we are failing today's young women and those who will come after them.

In the 1990s, I voraciously read Joan Chittister, Elizabeth Johnson, Sandra Schneiders and others who confronted outdated theologies and bad biologies and a patriarchal system whose time was past. I was on fire with their words, with my own dawning awareness that women are the authors of our own lives, and that we are equally part of bringing the reign of God to fullness.

Now, 25-plus years later, I wonder what has — or hasn't — happened. I read those same books again and realize they could have been written yesterday. We may talk more freely about the ideas but in reality very little has changed. Why are women still locked out of leadership and decision-making? Why are we not the authors of our own lives?

Here is a seemingly innocuous example. Recently, I was with religious women leaders in Rome at an audience with Pope Francis. It was an experience to enter into the Vatican and meet — however briefly — the pope. But I also came away disheartened.

When Pope Francis entered the hall where we were seated, the male cleric, a very good man, I'm sure, who had helped arrange the meeting, rose to present us to the pope. I expected him to say a few words and then hand the microphone to our leader, a very capable religious woman who has worked tirelessly to build and promote our organization for more than 20 years.

But no, the meeting unfolded man-to-man. When the male cleric finished his statement, he handed the microphone to Francis, who addressed us. While 110 women leaders sat quietly, two men spoke about us in our presence. Not one word uttered by a woman about women's experience in a women's organization.

It is so subtle, this sexism, this keeping women in their male-defined, silent, passive place. And, in this case as in probably many others, I'm certain there was no conscious intent to convey that unspoken message of keeping women in their place. Which is worse, because blindness to this kind of exclusion demeans women and keeps them out of leadership and decision-making. It damages the psyche and reinforces negative gender roles that are then self-perpetuating.

This kind of exclusion and objectification happens in word as well as in deed; take, for example, this illustration of how we use language to talk about women that I saw on a poster from the Sydney Women's March. The poster has three statements, all in the passive voice. It crosses out the passive and changes them to active.

It's an almost imperceptible difference. Passive voice: "How many women are assaulted by men every year?" Active voice: "How many men assault women every year?" Recall your grade school grammar class. In the passive voice, the subject receives the action: Women are assaulted. The passive "by men" phrase takes the weight of the action off men and puts it on women.

Consciously changing how we use language is key to changing unconscious thought and the behavior that flows from it.

Religious women have played a role in the cultural shifts awakening our world today — in the breaking down of silence around the sexual abuse of children in the church, in the raising of women to report and stand against domestic violence, against human trafficking, against rape and sexual harassment. We have educated generations of girls who are now strong women. We have helped them develop healthy spiritualities and worked side by side with them in our ministries and work for social justice.

But we often presented another message as well, if not by what we said then by the structure of our lives. For centuries, we were expected to cede authority, acquiesce without question, never raise our voices in anger, silently trust decisions made for and about us. Periodically, someone would stand up and reject those expectations. But as a whole, we modeled this manner of being to students and parishioners, on hospital boards and university campuses — sometimes even when we owned and ran the schools and hospitals.

It is this indirect message about women and the role of women that has its roots in outdated theologies and patriarchal dogmas and doctrines that we must finally root out.

As an institution, the church is aligned with cultural, economic and political systems that undervalue and devalue women. It is a struggle to be part of a system that keeps us out of leadership and decision-making, but it is our leadership that is needed now more than ever. Not leadership to change the church, but leadership in changing ourselves and our communities, which will in turn create the change we need to see in the institutions that make up our society. Women hold tremendous power and it is our choice to release it or not.

We have the power to change all our language and make it inclusive — a power that we have yet to fully exercise everywhere and always.

We have the power as individuals to change our behavior in board meetings and on committees and with staff. (If you don't think any change is necessary, read Lean In: Women, Work, and the Will to Lead by Sheryl Sandberg or watch her TED talk.)

We can take a place at the table, even when we're not invited or encouraged — and if we're shut out, we need to set up our own tables. We can take the microphone and speak, post the information and share it, open the door and walk in. We can speak our truth in our prayer, our works and our celebrations.

In my monastery, for example, our professions, jubilees and other major celebrations take place at the Liturgy of the Hours rather than a Mass. We do not bring in a male cleric who is not part of our community to be at the center of our communal celebrations. We invite them to celebrate with us as we invite all our friends, as a guest, not as a cleric. In so doing, we recognize that the teaching and leadership authority in our monastic community is our elected prioress.

Yes, human beings can empathize. Male and female, old and young, black and white, rich and poor. We can imagine walking a mile in another's shoes even when we cannot put ourselves in their head and heart and really know their experience. But that doesn't stop us from supporting one another and collaborating on building a more just future. Finally, though, each of us must make the decision to do something or nothing will change.

Social Justice | Cross out passive, change it to active

In rural Kenya, a path to adulthood without female genital mutilation