The Economic and Social Council Chamber at the United Nations headquarters is typically buzzing with ambassadors and representatives in suits and interns frantically taking notes, creating a constant clicking of pens and laptops. But on Oct. 10, 2014, I walked into the ECOSOC chamber to find hundreds of girls from around the country with their mentors, chatting and anxious for the event that was about to start. I had only begun my position with UNANIMA International, a coalition of 20 congregations of women religious which advocates at the U.N., a few months prior. The energy was truly palpable and has stayed with me since. From that afternoon forward, I have centered much of my work on girls’ rights.

The event, the second annual Girls’ Speak Out at the United Nations, celebrated girls and highlighted the issues they face in their daily lives. Girls from around the world submitted artwork, videos, monologues, poetry and songs which were performed by a group of New York high school students. The result was a stunning performance and dialogue between girls worldwide. Their stories, though all different and complex, created an overall narrative detailing the pain, beauty and potential of being a girl today. Dealing with issues of family and relationship, education, sexual violence, body image, poverty, child marriage, and empowerment, these girls did not shy away from harrowing realities. And despite the sometimes dark and always serious subjects of the performances, the mood was cheerful and inspiring; the girls spoke with poise, confidence and incredible talent. The audience was moved to its feet and brought to tears multiple times.

The Speak Out is in celebration of the International Day of the Girl (October 11 annually), a day declared by the General Assembly in 2011 in recognition of the potential and importance of girls. The day is a global movement that refreshes activists and advocates to continue their fight for the full recognition of girls’ human rights.

I became involved with the Speak Out and International Day of the Girl through the Working Group on Girls — a coalition of over 75 national and international non-governmental organizations with representation at the United Nations dedicated to promoting the human rights of girls in all areas and stages of life, advancing their status and inclusion, and recognizing and developing their full potential and capabilities as partners in action. This amazing coalition, on which I have the pleasure of representing UNANIMA International, organizes and co-sponsors the International Day of the Girl and events at the U.N., and the activism on social media leading up to the event.

The Working Group on Girls is unique in its work at the United Nations for its full inclusion of girls themselves in the work of the coalition. Girls advocate with ambassadors and representatives, plan events, write articles and participate in meetings each month. Empowering girls to be equal partners in the fight for their own human rights is the most effective way to stimulate change. Recognizing girls as girls — not only as the women of tomorrow — reminds policymakers, advocates and the public that girls are integral members of society who must be protected and empowered.

Throughout the intergovernmental negotiations for the Sustainable Development Goals (now officially titled Transforming Our World: the 2030 Agenda for Sustainable Development), girl advocates from the Working Group on Girls were active participants in ensuring girls would be empowered, educated and protected in the development agenda. There is no denying that ambassadors and representatives react most positively when hearing girls themselves demand their rights.

In celebration of the 2030 Agenda for Sustainable Development, the third annual Speak Out at the United Nations on October 9, 2015, focused on the future. When people entered the room, the year was 2065. Girls had taken over the United Nations and were looking back over the years to see what had changed. In the future, girls had full and equal rights, held the majority of leadership positions and were generally pushing the boundaries!

The performance was created by interweaving stories submitted by girls around the world. Education, gender equality, health and sanitation, climate change, violence against girls and girls’ leadership were all covered in dynamic ways. The performers, girl advocates and crowd all celebrated the achievements of girls while recognizing the struggles they still face. It was an important reminder that while we imagine a hopeful future and work daily towards it, there is a lot to be done at the U.N., in our communities and in the world before girls are seen as equal and as important as they truly are.

How do you see the status of girls changing over the next 50 years? What can you do in your community to promote girls’ rights?

When you open yourself, your politics and your advocacy to include the voices of girls in the determination of their rights, the answers become clear. Listen to girls! Let them speak their truths, uninterrupted. Girls are powerful, intelligent, witty and fun — and we can all use a bit of that in our work. Throughout my time working with the Working Group on Girls, I have seen this power firsthand and have learned the nuanced ways in which my actions affect girls today.

Girls breathe new life into our politics and advocacy. The International Day of the Girl is a reminder to celebrate all girls and empower them to be activists in their own lives.

[Victoria Larson works with UNANIMA International, a coalition of 20 congregations of women religious worldwide that does advocacy and education at the United Nations in various areas of human rights and social development. She graduated from Vassar College in 2014 with a degree in geography and plans to attend law school and spend her career advocating for migrants, girls and other vulnerable populations.]

For more inspiration and to hear from the girls themselves:

Click to watch a recorded webcast of the 2015 Speak Out at the United Nations International Day of the Girl.

Click to watch a recorded webcast of the 2014 Speak Out at the United Nations International Day of the Girl Child. 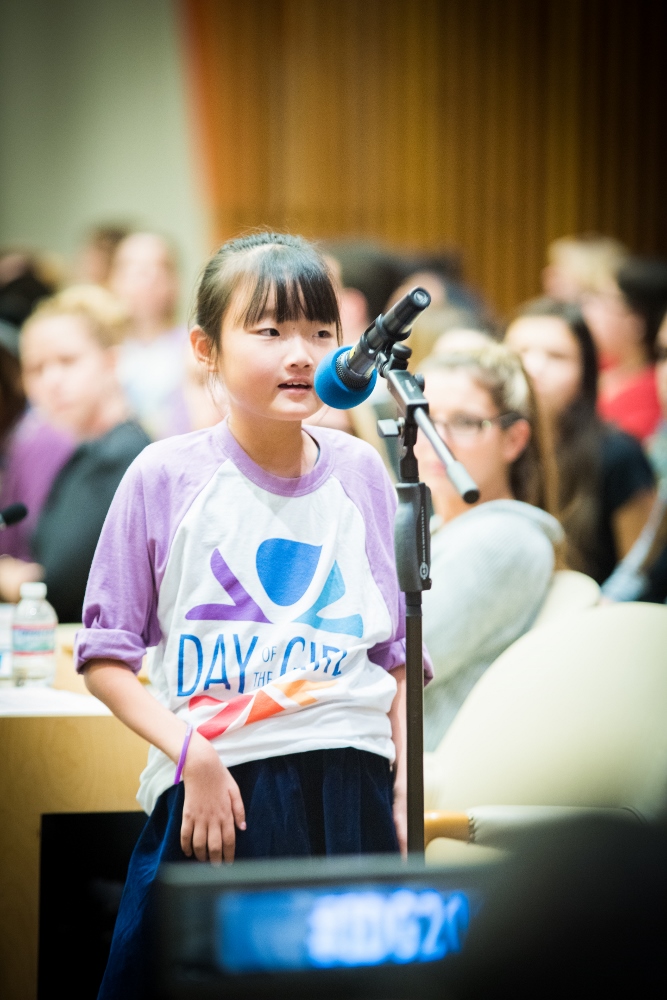 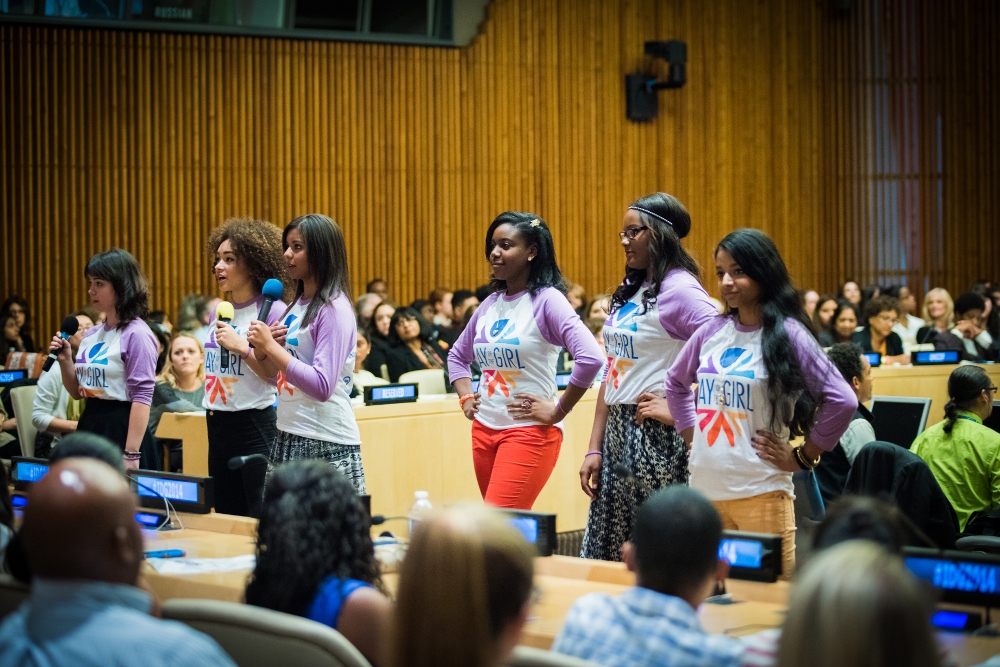 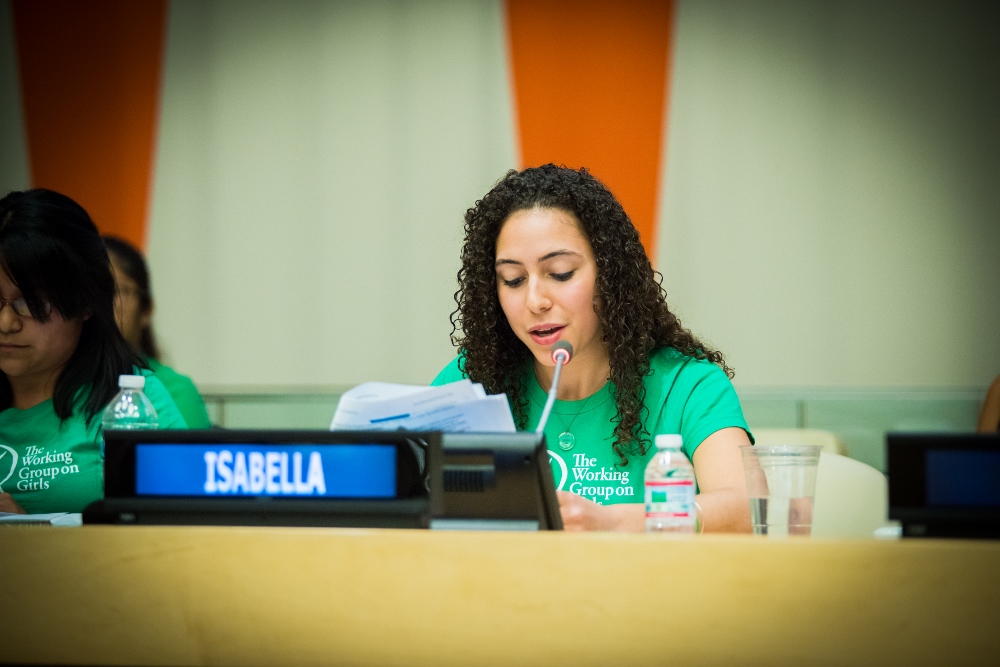