Choosing to resist for the whole 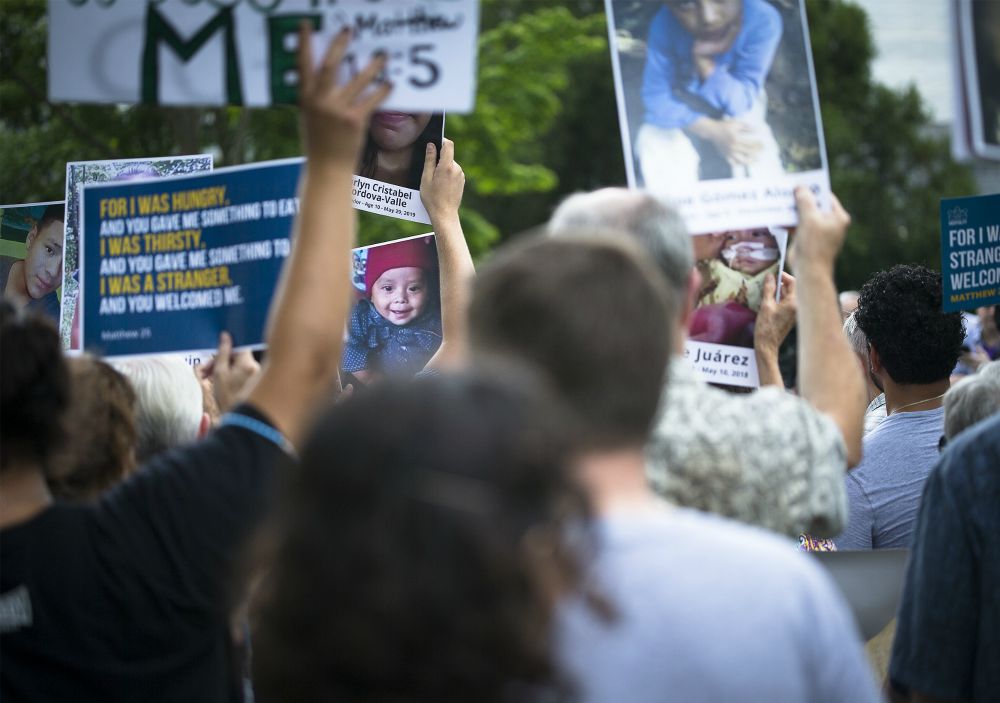 Catholic leaders and advocates protest the Trump administration's handling of detained immigrant children during a "Catholic Day of Action for Immigrant Children" July 18 near the U.S. Capitol in Washington. (CNS/Tyler Orsburn)

Resistance is a word with renewed meaning in our present era. You'll find it as a trending hashtag on social media or included in creative signs on display at marches for women's rights or climate crisis action. It can be used both as a rallying cry by those organizing against injustice, or as a derogatory label to dismiss such people as a squad of radicals.

On July 18, resistance in its purest sense was personified by the more than 70 Catholics who were arrested at the Russell Senate Office Building on the Catholic Day of Action for Immigrant Children. It did my heart good to see the faces of friends and colleagues in photographs among those arrested that day. Two lay associates of my own congregation, the Sisters of St. Joseph of Peace, were among those who were arrested for civil disobedience. Our sisters and associates at home kept vigil in prayer and solidarity. I was certainly with those arrested in spirit, and in the future I may choose to resist inhumane and unjust policies through civil disobedience myself.

Resistance comes from its Latin root, resistere: re (for "intensifying") and stare (for "to stand"). Contemporary definitions include: refusing to accept something; a force that acts to stop the progress of something or make it slower; or an organization that secretly fights against an enemy that has taken control of its country.

That last definition fits how I first became aware of the term resistance. I was a latch-key kid who, with my big sister, enjoyed watching reruns of "Hogan's Heroes" in the afternoons after school. For those unfamiliar with this television masterpiece, it featured a network of allied prisoners of war covertly engaging in the Resistance movement against the Nazi regime from within their prison camp, unbeknownst to their guards. In hindsight it is incredible — particularly in our age of reality TV — that this television show was a comedy, of all things.

In reality, those Catholics arrested in Washington, D.C., standing intensely against injustice, were being faithful to a long tradition of Christian resistance. They refused to accept the detention of children at the border, the separation of families, and the inhumane treatment of asylum seekers. Their collective and prayerful act of civil disobedience in the nation's capital was intended to slow the progress of inhumane policies and practices taking place in our name against families seeking refuge and safety. Did they end child detention? Not yet.

What they certainly did do, however, is raise the public's consciousness through media attention drawn by their public act of resistance. Who knows what impact this will have? Who knows how the movement will grow? Even Mark Hamill, yes, that Mark Hamill, a.k.a. Luke Skywalker of "Star Wars" fame, retweeted the viral video of Sr. Quincy Howard, a Dominican Sister of Sinisinawa, being led outside by guards in her preaching habit, hands tied behind her back. Sister Quincy preached Gospel values through her nonviolent action, a force more powerful than hatred and inhumane policies.

Christian resistance follows in the footsteps of Jesus. As we say in my own community's Constitutions: "Christ is our peace, the source of our power. United with him we engage in the struggle against the reality of evil and continue the work of establishing God's reign of justice and peace." Sometimes this takes risk, such as taken by those Catholics who faced arrest to stand against injustice and to resist inhumane policies.

"Hogan's Heroes" was a dramatic fictional representation of the organized Resistance to the evils perpetrated by the Nazi regime. Yet the history that inspired it must never be forgotten. I was dismayed recently to see a social media meme on the page of a family acquaintance that depicted a picture of shoes piled outside a Nazi concentration camp with the caption: "Shoes left by victims of gun control, Germany, 1945." I felt compelled to resist this revisionist history and left a nonviolent comment, challenging this misrepresentation of the roots of the evil that was the Shoah, whereby millions of people were systematically murdered by the Nazis.

We wonder now how it could have happened then, how the German people could have allowed such atrocities to take place in their name. We conveniently forget that it didn't start with gas chambers. It began first with dehumanizing policies and rhetoric, labelling certain ethnic groups as criminals unworthy of humane treatment. Can we honestly equate what is being done by our government at the border to the Holocaust? No, and yet, we must be wary of the warning signs of organized inhumane treatment of people, demonizing language and lack of empathy that are, I believe, signs of evil taking root in our body politic. This, my friends, we must resist, whether or not our actions have a demonstrable or measurable impact. We must resist for the sake of our own humanity and the sake of the whole.

Walter Wink, in his 1992 book Engaging the Powers: Discernment and Resistance in a World of Domination, looks to Jesus for the roadmap to resistance. When Jesus turned the other cheek, for instance, Wink believes he was outlining "a third way, a way that is neither submission nor assault, neither fight nor flight, a way that can secure your human dignity and begin to change the power equation." 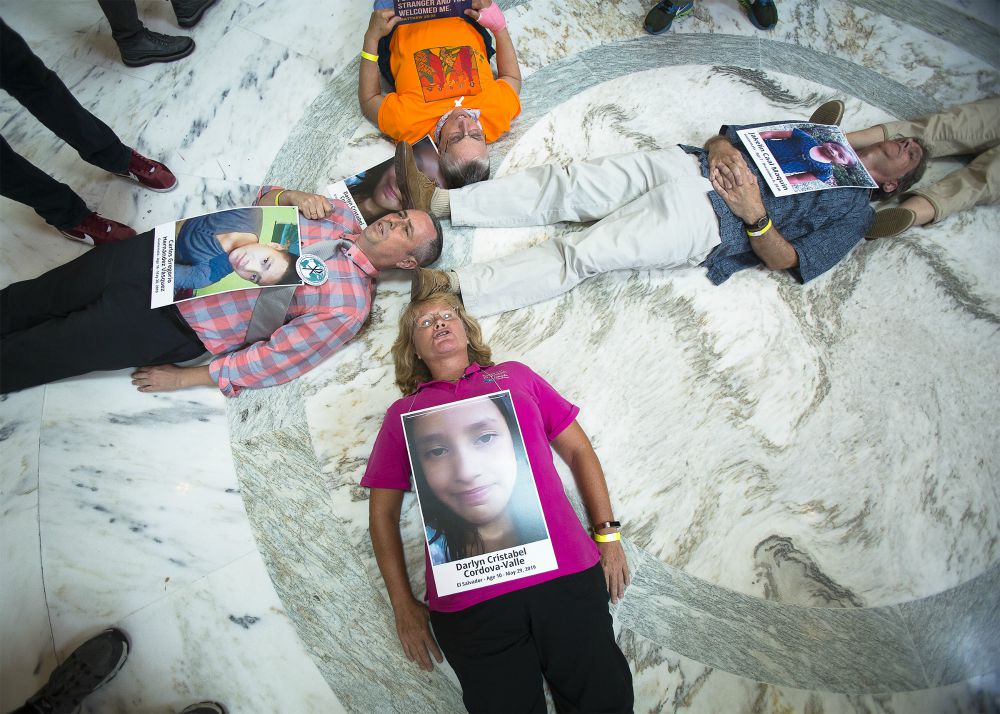 Catholic leaders and advocates lie down in the shape of a cross in protest the Trump administration's handling of detained immigrant children during a "Catholic Day of Action for Immigrant Children" July 18 in the Russell Senate Office Building in Washington. (CNS/Tyler Orsburn)

The state of the world today can be somewhat paralyzing for people of goodwill. We are becoming numb to the news. How many more photos of children, lifeless on the shore, victims of violence and war and closed borders do we have to see? What can we do?

We cannot confront dehumanizing language with equally disrespectful words. We cannot meet hate with hate. We cannot resort to inhumane actions to resist assaults against human dignity. Jesus, God with us, invites us to choose to resist evil through the best of our humanity.

I have found myself overwhelmed, and at the same time I have this innate sense that we must choose to resist the inhumanity. I have been praying with the idea of Jesus's third way and discerning how I might embody this in my own life. Wink offers a rather long list of creative responses for those who choose to resist. For our present moment, I offer this sampling from his list:

This we can do, in big moments and little ones. We do not have to organize in secret but must speak out in the open, in the public square and in our own spheres of influence. We can resist dehumanizing language and actions through our conversations, through our social media presence, through letters to the editor or phone calls to the White House. We can stand against inhumane and unjust policies carried out in our name. And we can do so with the best of our humanity.

My big sister, the one who used to watch "Hogan's Heroes" with me after school, has this quote widely attributed to Dorothy Day on her own Facebook page: "No one has a right to sit down and feel hopeless. There is too much work to do."

Indeed, there is, and I for one choose to resist. How about you?

Social Justice | Choosing to resist for the whole

Three kings and a tyrant

'Here I stand' for justice

Q & A with Joyce Duriga, author of a book on Sr. Helen Prejean