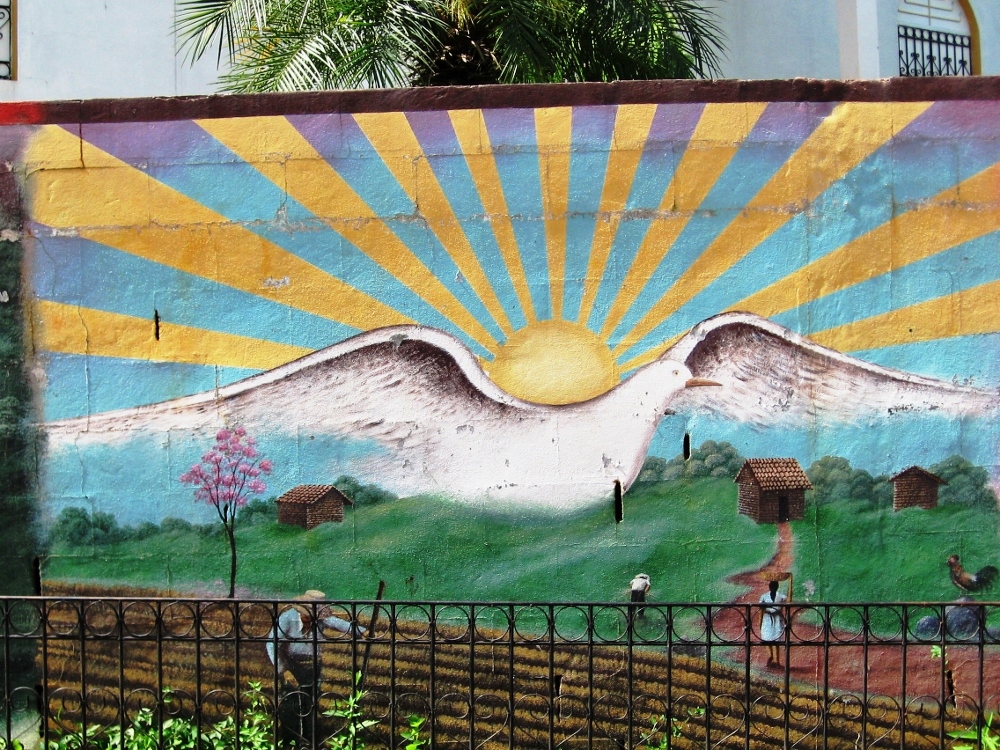 Mural in El Sitio telling the story of a future full of hope. (Susan Rose Francois)

What were your greatest concerns when you were 10 or 11 years old?

I was a Catholic school girl growing up in a middle class family in the suburbs, so my concerns were relatively light. Sure, I was helping my mother to care for my elderly grandparents who had moved into our spare room that year. But otherwise I mostly remember saving my allowance to buy records and tapes. It was 1983, the year that Michael Jackson's "Thriller" and Culture Club's "Do You Really Want to Hurt Me" were released, both of which made up the soundtrack of my 11-year-old world.

Three thousand miles to the south in El Salvador, 10-year-old Rogelio was in a childhood with a more dangerous sort of soundtrack — bombs, explosions, and gun shots. I met Rogelio as an adult, several years ago when I was in El Salvador on a pilgrimage of sorts with other Sisters of St. Joseph of Peace, including some who had accompanied the Salvadoran people during and since the country's bloody civil war.

Our delegation traveled by boat on Lake Suichitlan to the site of the 1983 Copapayo massacre. During those dark days, the people of Copapayo were struggling to survive and seeking better conditions for their families. Many of the men had left their families behind in order to fight with the guerillas, leaving mostly women, children and the elderly in the village. Just before the massacre, these villagers had evacuated to avoid confrontation with the military. They later sent scouts to see if it was safe to return home.

Unfortunately, while they had thought the coast was clear, the army opened fire on the returning villagers. More than 100 civilians died in the Copapayo massacre, killed by the Atlacatl Battalion, members of the Salvadoran military who had been trained by the U.S. government at the School of the Americas. A platoon from this same U.S.-trained battalion would later murder six Jesuits, their housekeeper, and her daughter at the University of Central America in 1989.

Rogelio was a survivor of the Copapayo massacre. He told us that some of the women and children survived by hiding under lily pads that were growing in the lake. His mother and sister, however, did not survive. Others who survived the original attack, including Rogelio, were later taken on a forced march at gun point. 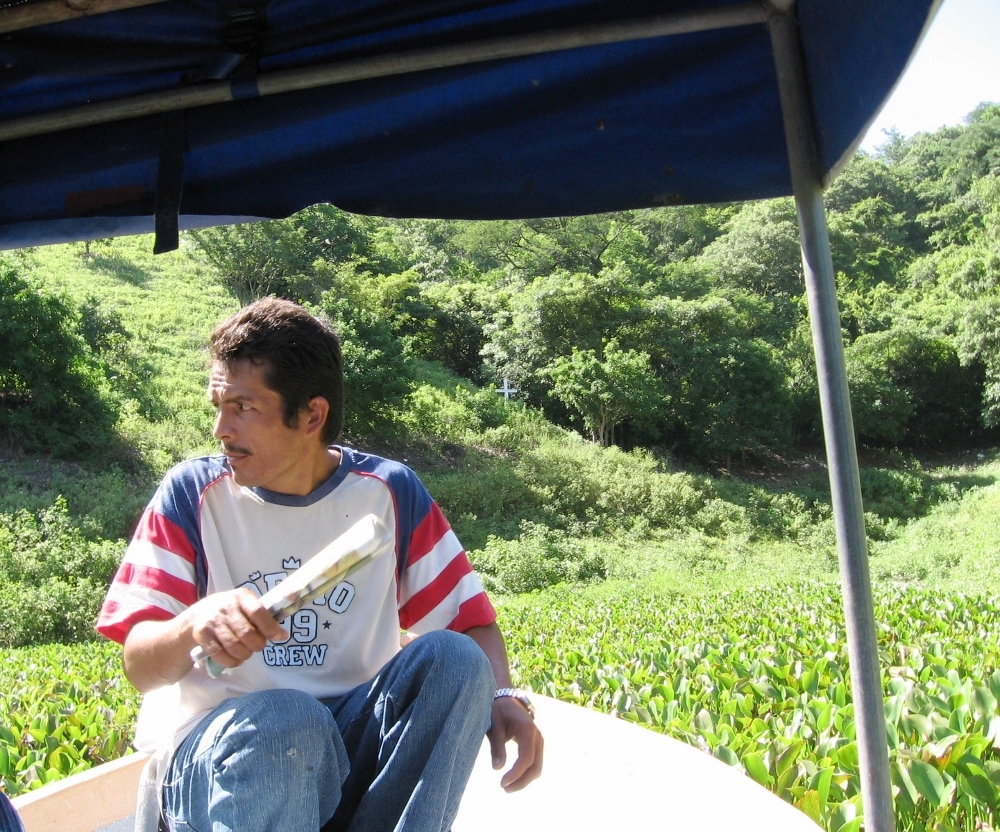 As Rogelio told his story to our little group, he looked at his hands and at the ground beneath his feet. Watching and listening, I could not escape the fact that we were roughly the same age. What would it have been like to witness such savagery as a young person? How would I be today if I had found myself on my own at 10 or 11, a refugee seeking safety in a strange land, all the while mourning the loss of my family?

It seems clear that these should not be the concerns of children. And yet, we see millions of children today fleeing situations of violence, whether they are seeking safety from war or drone strikes in Afghanistan and Syria or the escalating violence of Central American drug and gang wars.

On our pilgrimage to Lake Suchitlan, we learned that some of the local refugees eventually made their way to a refugee camp named San Jose Calle Real, where two Sisters of St. Joseph of Peace, Andrea Nenzel and Margaret Jane Kling, were engaged in a ministry of presence. Andrea and Margaret Jane had answered an urgent call in 1985 from the Central American Bishops to accompany people displaced by violence. Years later, many of the refugees returned home to resettle and rebuild their lives.

I was privileged to be on the pilgrimage to El Salvador with Sister Margaret Jane. As we traveled the countryside, again and again I saw her reunited with people she had known in the refugee camps. There would be the call of "Hermana Margarita!" followed by a warm embrace and long conversation, catching her up on all the family news. There was even one young woman named Andrea Margarita, who had been born in the refugee camp and obviously named after our sisters. It became clear to me that their presence and concern during a very difficult and dangerous time had created life-long bonds.

Our community's relationship with El Salvador continues. Over the years several other sisters have lived in El Salvador. We co-sponsor PazSalud with the PeaceHealth system, a volunteer health care mission to El Salvador. Now living in New Jersey, Margaret Jane regularly visits El Salvador and also visits with immigrants held in detention by the U.S. government in our local county jail.

The Sisters of St. Joseph of Peace have long had a concern for immigrants and refugees. In 1881 our founder Margaret Anna Cusack (Mother Clare) wrote to the Irish bishops: "Whatever opinion many of us may have as to the cause of emigration, of the fact there is no question." Seeing the massive waves of emigration from the starvation of Ireland to the promise of America, she expressed grave concern for the safety of the new immigrants, especially young women in a strange land. She asked the bishops to form an "Emigrants Aid and Protection Society" in conjunction with the American bishops. Sadly, it seems they did not heed her suggestion, but three years later she founded the Sisters of St. Joseph of Peace. 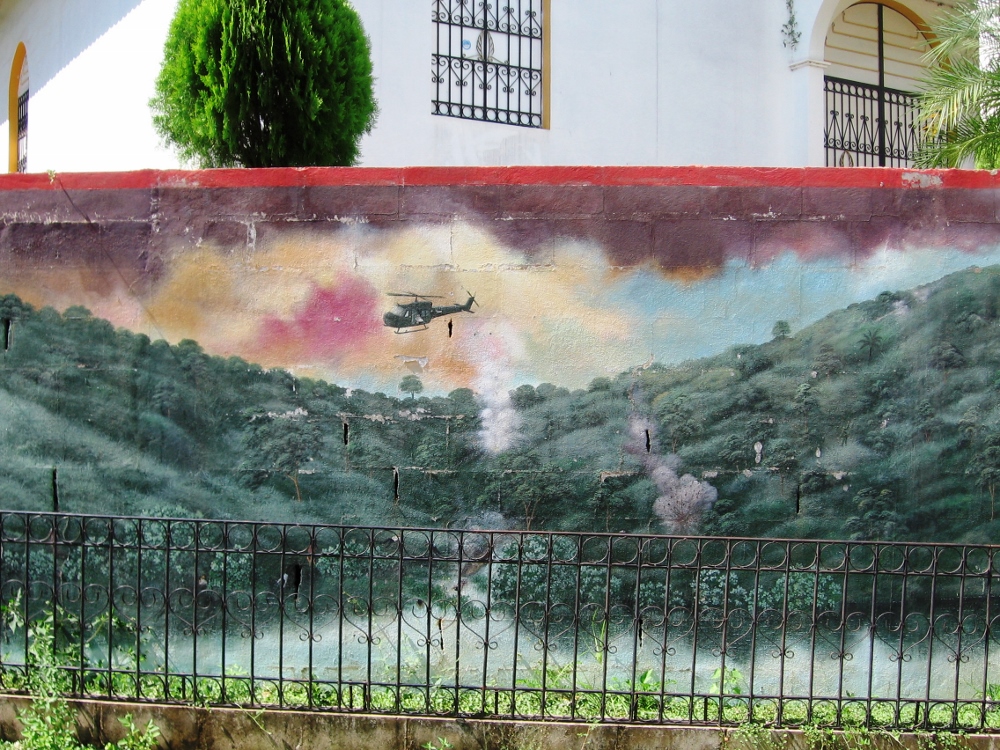 Mural in El Sitio telling the story of the massacre. (Susan Rose Francois)

One of our first ministries was to provide safe housing for immigrant women in New Jersey. Sisters and associates continue to address immigrant and refugee issues in the U.S. and United Kingdom, visiting immigrants in detention, accompanying refugees and asylum seekers, and teaching English to immigrants. Later this year we are sending volunteers to support the Catholic Worker community as a ministry of presence to refugees in the "jungle," the refugee camp in Calais, France.

Every year our community celebrates Founder's Day on June 5, the anniversary of Mother Clare's death. This year we celebrated by issuing a congregational statement she would no doubt have supported: Welcome Immigrants and Refugees. We "express our grave concern for refugees, asylum seekers, and our migrant brothers and sisters." Not only do we call on all governments to provide safe haven, we also urge them to address the root causes of forced migration, such as economic inequality, war, arm sales, and environmental degradation.

June 20 is World Refugee Day. Did you know that there are now 60 million forcibly displaced persons, more than at any time since the end of World War II? Many of these forced migrants are unaccompanied children, languishing in refugee camps and at the United States' southern border. Our governments continue to deny safe haven, leaving migrants subject to victimization by human traffickers. Children should not have to worry about such things. It's up to the adults in the world to follow refugee protocols, pass humane immigration reform, and make sure that the world's children — the next generation of Rogelios — can grow up in peace.