Beheaded bodies lying in the streets. Stray dogs and pigs picking at human corpses on the roadside. Vibrant communities silenced and still, everyone indoors, too afraid to go to school or to the market. Roadblocks stopping travel, isolating entire villages. A pregnant woman delivers a baby who doesn't survive because they can't get to the hospital. Food rots because no one can travel and farmers can't transport their harvests, and survivors of violence become increasingly malnourished, moving toward starvation.

These scenes may sound like snippets from a nightmare, but for Anglophones in Cameroon, these are the current facts of life. I gleaned those descriptions listed from an email forwarded to my inbox a couple weeks ago, written by a Cameroonian to a friend of my community, a philanthropist in Wisconsin. The writer was lucky to be able to send the message to his friend in Wisconsin; the Cameroonian government has blocked the internet in the Anglophone region frequently in recent months. The writer is lucky to be alive.

Cameroon, a nation in West Africa, is about 80 percent French speaking and 20 percent English speaking. Late in 2016, students and professionals such as educators and lawyers in the Anglophone region began to protest the Francophone majority, declaring that they were being treated like second-class citizens. In response to their protests, the Cameroonian government repressed protestors: Many were arrested, several were wounded, at least four were killed. Since then, the violence continues to escalate. Since 2016, hundreds of civilians have been killed, and over 300,000 Anglophone Cameroonians have been displaced.

It's tragic whenever any minority group is suppressed anywhere, but we don't always hear about it. The situation in Cameroon, sometimes called the "Anglophone problem," and the related violence has received some international attention. Occasionally a headline in news outlets such as the BBC, National Catholic Reporter or Aljiazeera will update the international community. I read a few updates during the nation's presidential election a few weeks ago.

But I've mainly heard about the crisis from the sisters in my community, from those with close ties to those with friends in Cameroon. Over midwestern meals tucked away in the Wisconsin woods and in casual conversations before or after prayer, I'll hear comments like, I got a message from Sister so-and-so in Cameroon. The clinic she spent decades building from the ground up has been destroyed. Or …the teachers still aren't able to teach… there's going to be millions of children behind in their education because of the crisis, and the sisters are at a loss. Variations of these tragic updates have been in my consciousness for the past two years, along with a great feeling of helplessness.

I have never been to Cameroon, but Cameroon has been part of my religious life since I entered community nearly 13 years ago. For the past 20 years, our congregation (and two other American Franciscan congregations) has been in relationship with the Tertiary Sisters of St. Francis in Cameroon, through a shared project called the Franciscan Common Venture.

The two sisters I live with have spent significant time in Cameroon, especially in the Anglophone region, along with many other Franciscan Sisters of Perpetual Adoration. I've shared community life with Cameroonian sisters visiting us from Wisconsin for study or respite.

Although the Common Venture project and the formal relationship that our congregations shared have now ended, the friendships between us persist. Now that our sister-friends are living in the midst of a crisis, though, the shape of this relationship is an experience of solidarity.

The Catechism of the Catholic Church names solidarity as "an eminently Christian virtue," yet when I first heard the word while studying Catholic social teaching in college, it was an abstract idea. I thought of advocacy, activism, being willing to stand up for justice even if the cause doesn't directly impact us. I thought of protests and picket signs.

I don't think my understanding was far off, and solidarity is a Christian value I have aimed to incorporate into my life ever since. But now, with the current crisis in Cameroon, solidarity is serious. What if our efforts to advocate for justice and peace fail? Will one of my friends be killed? Will the sisters not be able to live their mission? What will happen to the clinics, hospitals and schools that they built? How will the people survive these atrocities?

Solidarity isn't a gentle probing of the spirit or a sweet Christian suggestion when lives are on the line. It's an insistence to get to work. In fact, that's what some of my sisters have done, advocating for House Resolution 1111, "Calling on the government of Cameroon, armed separatist groups, and all citizens to respect human rights and adopt nonviolent approaches to conflict resolution." We're inviting others to join us in our advocacy for peace for Cameroon, too. Another part of the work is educating oneself about the difficult facts, too, so I've been reading documents about the crisis, like this one from Human Rights Watch or this one from International Crisis Group.

Like all relationships, solidarity can be messy and demanding. It requires that we enter into the suffering of others, that we change, and that we reach out with care and compassion, no matter how helpless we may feel. Acting in union with the concerns of others across the miles, we are compelled to make a change, to save lives, to protect those who are suffering. Although the circumstances may be grim, a sisterly solidarity enlivens a bold hope to those on both sides of the relationship.

For the unity that bonds us into sisters across the miles is Christ's love, and we're determined to believe that somehow a resurrection joy can overcome the worst of circumstances, even corpses decaying in the streets.

[Now on staff at Marywood Franciscan Spirituality Center in northern Wisconsin, Julia Walsh is a Franciscan Sister of Perpetual Adoration, a Catholic youth minister, a committed social justice activist, and a graduate of Catholic Theological Union. Her award-winning writing has appeared in America, Global Sisters Report, Living Faith, and PILGRIM Journal. Visit her online at messyjesusbusiness.com and follow her on Twitter @juliafspa.] 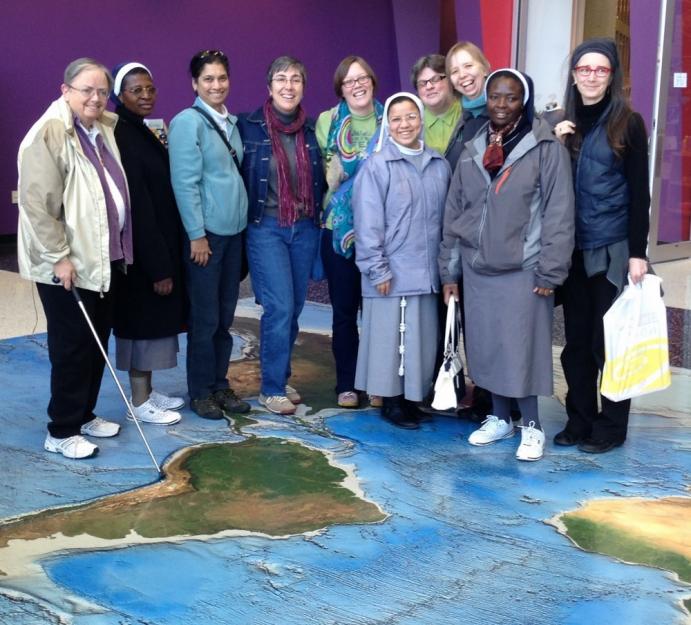