If light is restricted, we drift further apart 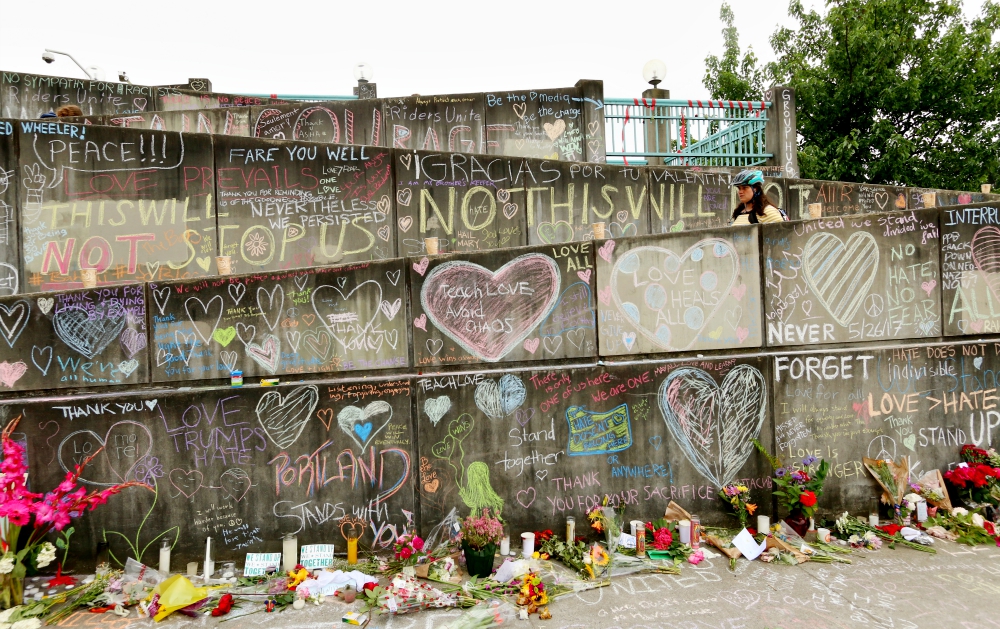 A woman walks down a ramp at the light rail station in Portland, Ore., where citizens have constructed a massive makeshift memorial for two men killed May 26 while they were defending two women from an attacker authorities said was using racial hate speech. (CNS / Catholic Sentinel / Ed Langlois)

Like me, you may have noticed that we seem to be becoming more and more polarized in contemporary society.

Perhaps this is merely an illusion, fueled by the speed of the internet and new tools of communication like social media. There always have been and always will be differences of opinion. As a U.S. citizen, I am reminded of the famous debates of Abraham Lincoln and Stephen Douglas; even though they took place in 1858, before the era of radio, television or internet, they are imprinted on our collective national memory. Then in the American Civil War, which erupted a few years later, the gap between our viewpoints became so wide that we have struggled to find our unity and have often turned to violence and hatred instead.

According to the Oxford dictionary, there are two basic meanings for polarization. The most common definition is to "divide or cause to divide into two sharply contrasting groups or sets of opinions or beliefs."

The other comes from the world of physics. To polarize something means to "restrict the vibrations of (a transverse wave, especially light) wholly or partially to one direction."

While differences of opinion are part of our human experience, lately I have been reflecting on how our ways of relating in the 21st century — with each other, with our environment, and even with the truth — have resulted in a restriction of the flow of thought and emotion "wholly or partially to one direction." Depending on which side of a particular camp you find yourself, you are exposed to a whole different set of facts, feelings and perceptions of reality.

As a result, "light" — in this figurative sense the dynamic energy of relationship and truth — is indeed restricted, and consequently we drift further and further apart from each other, with dangerous consequences.

This became clearer to me recently as I was scrolling through my own social media feed following the Memorial Day weekend attack on the light rail train in Portland, Oregon.

First of all, that violent outbreak of hatred, and the courageous acts of solidarity that ultimately led two men to lose their lives, hit close to home. I used to live just a few miles from the commuter rail station where the attack occurred and, in fact, I frequently rode the train to that very station. Many of my friends live in Portland, and my social media feed was immediately filled with an outpouring of shock and support, both for the families of the men who lost their lives, as well as for the young women whom they had sought to protect.

My local connection no doubt meant that I was more enmeshed in the experience, even at a distance. Friends attended the memorial vigil at the transit center and posted their own moving photos and reflections. They also posted links to thoughtful reflections on Oregon's history of racism, and the continued prevalence of white supremacists in Portland. 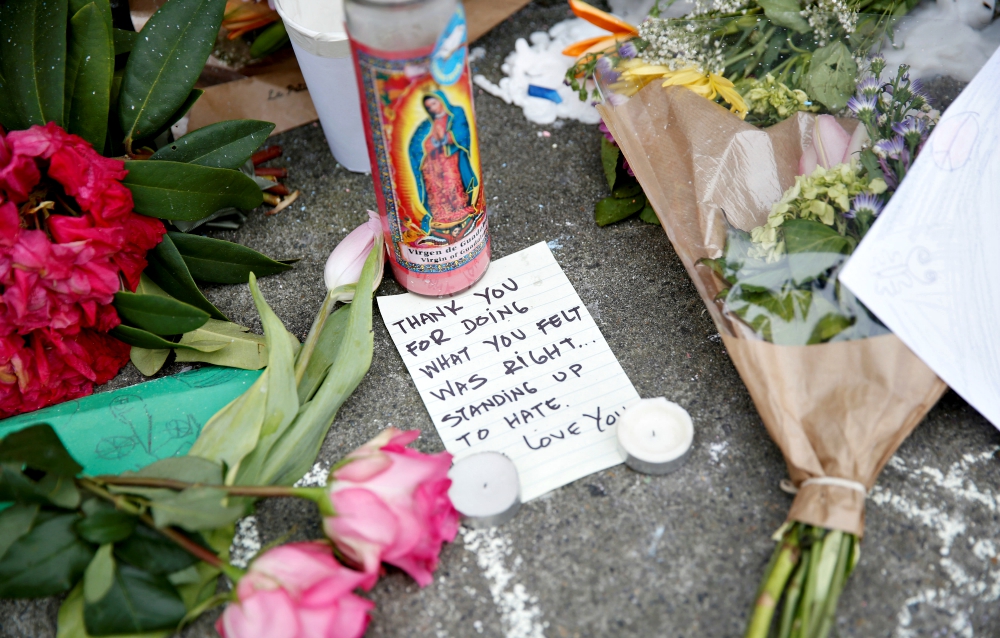 A candle with an image of Our Lady of Guadalupe is seen alongside a note and flowers at a makeshift memorial May 29 in Portland, Oregon, for two men who were killed May 26 on a commuter train. (CNS / Reuters / Terray Sylvester)

I was especially touched by the reflections of Micah Fletcher, one of the men who stood up to the man spewing dangerous and hateful words at the two young women sitting on the train. Fletcher was stabbed in the neck, but thankfully survived the attack.

"We must stand hand-in-hand with one another," he said later, "and find a way to start ending the anger and the hatred and to not allow anger and hatred to flood our city streets with violence and with the destruction that can come with it."

These were the "vibrations" of information and feeling I was experiencing after the attack, until I discovered some alternate viewpoints in my social media feed, which I found quite jarring. One woman I know through family connections posted a meme that seemed to shift blame for the attack to liberals, because the perpetrator expressed support for Bernie Sanders and Jill Stein. I had already read a column by a local reporter who had interviewed the attacker a few weeks earlier, and who anticipated that some would latch on to this viewpoint to distract from the true motivation of the attack — racial hatred.

When I posted a link to a reflection on the bravery of those who stood up to hatred and paid the ultimate price, another acquaintance responded that this was not a case of American values, but simply about mental illness.

In both cases, I was shocked by what seemed like insensitivity and ignorance of the true scope and impact of this disturbing event in my adopted hometown.

And yet, I also found myself oddly grateful. As much as I lament the ways we have become polarized, I myself participate in the creation of "information silos," which I suspect to be at the root of our increasing polarization. Here was an opportunity to experience the vibrations at the other end of the spectrum.

I do not know either of those social media acquaintances very well, but I do know them to be good people. They love their country and their families. They are not monsters. They are not ignorant or uneducated. They are simply people who differ with me in political opinions, and who are swimming in a different stream of information.

In both cases, I chose to engage, not in the angry language of what passes for debate on the internet, but in what I hoped was an invitation to constructive dialogue. I don't know that I was particularly successful, if by success I mean convincing these folks of the error of their ways and the absurdity of their alternative facts. But if by success I mean seeking to bridge the divide, respect the other person's perspective and share my own values and insights, then maybe it was a success. I was certainly less indignant and angry after the two exchanges.

I do not claim to have discovered an "anti-venom" for the sting of polarization. Yet, my experience does make me think that one way to resist polarization is to engage respectfully in conversation and dialogue when the opportunity presents itself, even when it seems pointless. At the very least, it will serve to increase the dynamic flow of thought and feelings in a positive direction. Conversation by conversation, we can find ways to start ending the hatred and anger.

Spirituality | If light is restricted, we drift further apart

A pilgrimage through quarantine

Ending the year with gratitude

A call to arms, all-embracing