by Colleen Gibson
Religious Life
This article appears in the Sustainable Development Goal 17: Partnerships for the Goals feature series. View the full series. 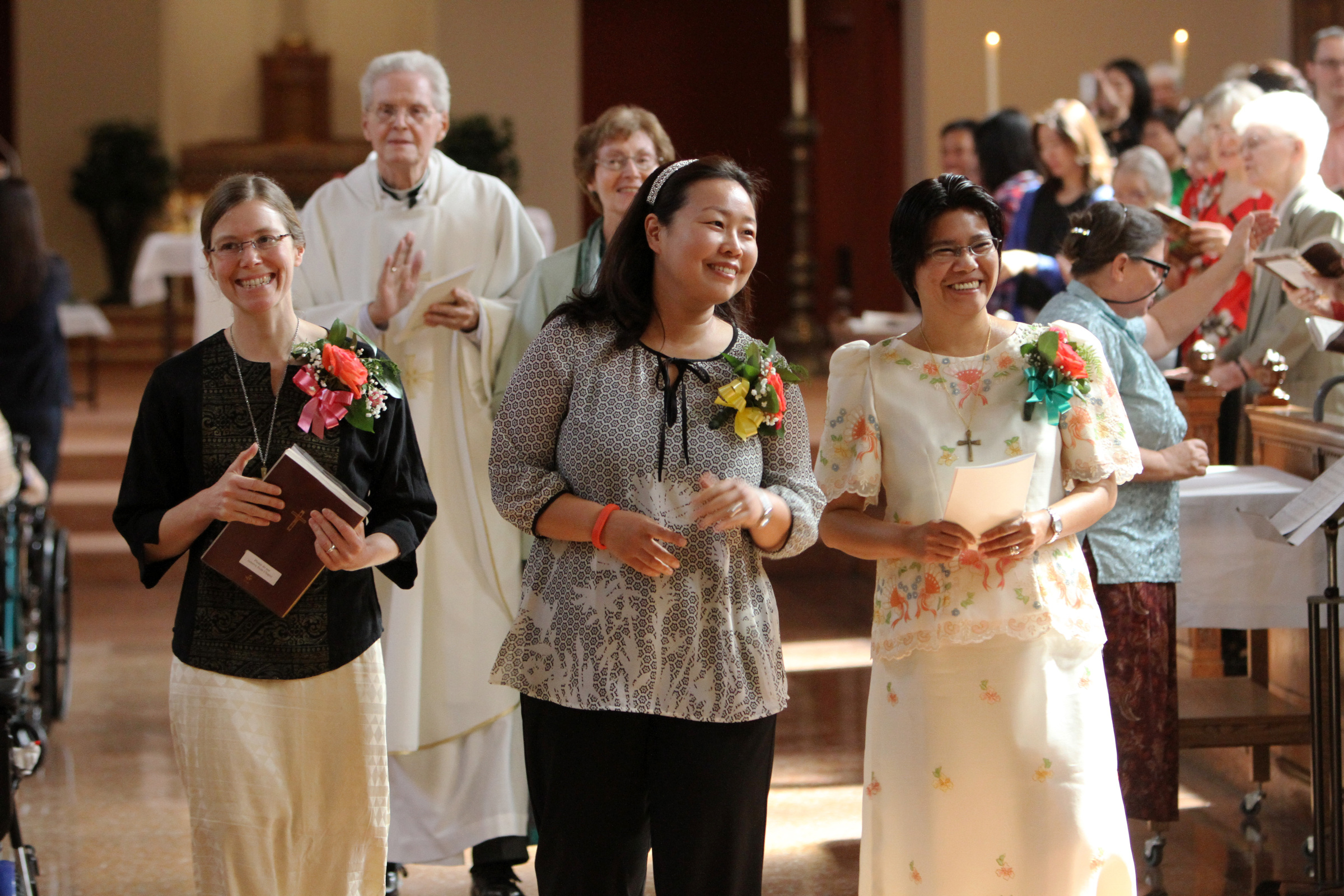 Maryknoll Sisters Julia Shideler, Anastasia Lee and Abby Avelino smile as they process from the chapel in 2014 after professing their final vows during Mass at the Maryknoll Sisters Center in Maryknoll, N.Y. (CNS photo/Gregory A. Shemitz)

Yet, somewhere along the line, I realized this innocuous comment about the future meant different things to different people. For some, it was a simple fact: numbers, facilities, ministries — everything could and probably would change. For others, though, the change meant something else.

"Our future isn't our own," one sister said to me at a community meeting. She then went on to speak about transitioning our ministries to lay leadership, the importance of promoting our associates program, and interesting new programs developing involving young adults and spiritual "nones." I listened intently to her points, noting her energy around these issues. I also noticed something else: these plans didn't involve me, or any newer members for that matter.

Then, last week, a New York Times article about the Nuns & Nones movement showed up in my inbox. It wasn't the first I'd heard about the movement, having read about it (Global Sisters Report had a series on it) and heard about it from other sisters. The thing that stood out to me this time though was an ongoing narrative that even the sister who spoke of the future not our own seemed to have internalized: as diminishment accelerates, we must find someone to carry the charism.

The narrative of diminishment and replacement though isn't the whole story. Where, I wonder, is the future within religious life? What's a more accurate picture?

I've seen the future and it is partnership

A few years ago, I was missioned to a new neighborhood center being opened by my congregation. As we got the center up and running, the team of sisters charged with implementation began to realize we needed help. Putting out a call for volunteers, a number of our congregational associates joined us in mission.

One day a few months into the project, as we were working in the food pantry, one of the associates stopped me as we stacked canned goods. "When I became an associate twenty years ago, this is what I always dreamt of," she said looking intently in my eyes. "I always dreamt of working side by side with the sisters, serving together … and here I am, finally doing it."

I soaked up the depth of her sharing about the connection she felt. This.I thought to myself, This is the future.

Thinking about what the future could hold for religious life, I hold these two stories, one of realized relationship and another of a way of life in need of a lifeline.

Painting a portrait of replacement is simplistic. It assumes that the changes in religious life are something to be solved, that the decrease in numbers can easily be remedied, and that the disproportionate distribution of demographics requires a single solution.

In reality, religious life is and always has been more complex than that. It is a system dependent on the Spirit. We trust that women and men will continue to be called to this way of life, a way of life that is indeed meant to be shared with the world. The call to religious life may manifest itself in many different ways and the manner in which the principles of religious life and commitment are lived out will vary from person to person, be they associates, partners in mission or vowed members. Charism can take form in and on many vocational paths, but to consider the future of religious life we must commit to the core from which that charism operates and emanates.

Vowed religious life is not just a way of living or a systematic approach to social change, it is a fundamental call to a life committed to the Gospel through a distinctive set of vows and particular (and, by most accounts, peculiar) means of communal living. To consider the future of religious life without making serious efforts to preserve and promulgate this form of membership is a dismissal of those committing themselves to vowed religious life today and in the future.

As I approach my own final vows, this point resonates with me in a particular way. Over the course of my formation, I have repeatedly heard that the future of religious life lies in the passing on of mission and charism to lay associates and partners. Many of my peers relay similar stories of community meetings in which other forms of congregational membership are pointed to as the hope for survival of religious life.

Imagine the effect of such statements on the mentality of newer members and the deeper sentiment they convey about congregational commitments to the future of vowed membership. Pointing to another group of partners as the inheritors of a charism to the exclusion of others on a path to vowed commitment devalues their commitment and creates unnecessary division.

When other forms of membership are raised up as ways to bolster congregational numbers and reach, energy often swarms around the idea. This energy, in my experience, indicates a hope that new partners will continue the good work of the congregation and/or that newcomers will be able to absorb the wisdom of our sisters and our structures. This energy, however, often overlooks current membership.

I have no doubt that the many forms of membership in our congregations will (and do) play a monumental part in the lives of religious congregations into the future. Yet, for all the hope these forms present, the cultivation and preservation of vowed membership must not be lost.

Rather than painting a picture of replacement when we consider those who might be in line with or might benefit from the lessons of religious life/our charisms, it would serve us well to consider the value and strength of partnership as a joint venture. Energy needs to be committed both to cultivating partnerships and to attracting new members. The countercultural nature of religious life and the vows will always be appealing to some segment of the population. Why not open the doors of consideration to all without excluding or replacing any one group? Together we can paint a picture much more vibrant and complete than we can without one another.

As I envision the future of my own life as a vowed religious, I see myriad opportunities for what such intentional cultivation could make possible. From housing and ministry to companionship and peer support, the possibilities are endless and exciting. As congregational numbers normalize, newer members are finding companionship in vowed members of other institutes who know the reality of what it means to be a vowed religious today; similar possibilities could lie in creating connections around mission and charism between peers both inside and outside of religious life. Such partnership honors both parties and, in relationship with one another, helps to strengthen each one's commitment to the vocation they are living.

Such communion upholds and strengthens the core of religious life. In recognizing that the driving force of religious life is not a series of best practices that can easily be co-opted or universally applied, but rather is a firm commitment to the call of faith lived out in the day-to-day, partnership points us toward a way forward.

The future may be unknown, but it will undoubtedly lead us deeper into relationship with God and with others. No one needs to be replaced or forgotten; we need to adapt and transform. Trusting the Spirit, we move forward in hope, clinging to the foundations of our being, working to welcome newness in all members, and letting God write the story instead of us.

[A Sister of St. Joseph of Philadelphia, Colleen Gibson, SSJ, is the author of the blog Wandering in Wonder and has been published work in various periodicals including America, Commonweal and Give Us This Day. She currently serves as coordinator of services at the SSJ Neighborhood Center in Camden, New Jersey.]

In formation to be a Benedictine oblate

Viriditas: A key to discernment on the future of religious life