by Mary Ann McGivern
This article appears in the Nuclear feature series. View the full series. 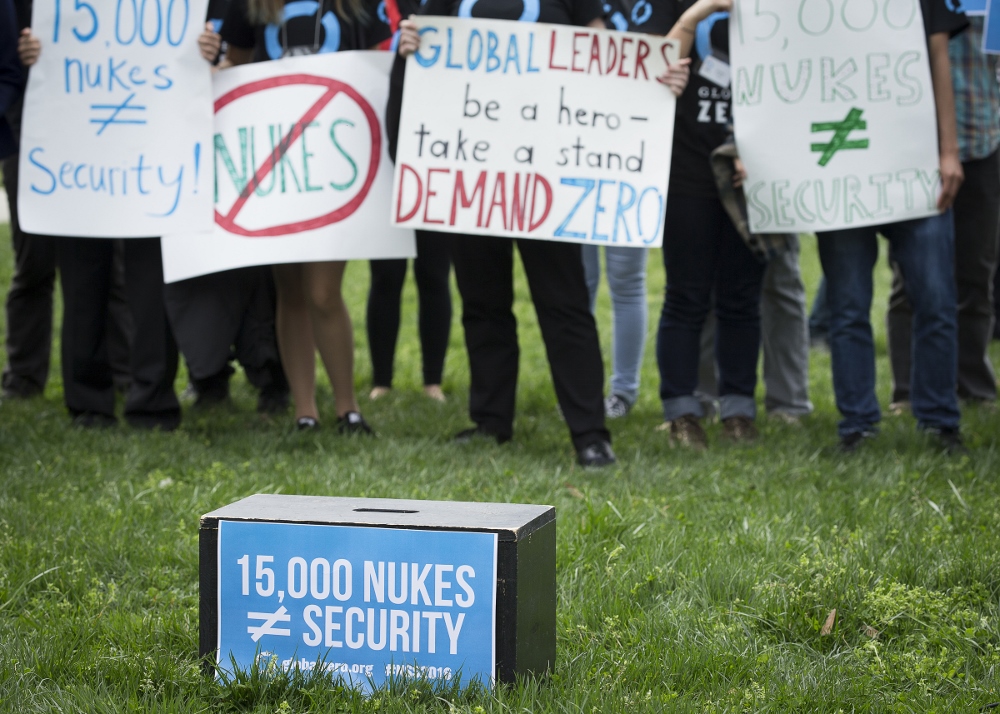 Robert Frost wrote "Fire and Ice" about ways the world might end, but I find myself thinking more in terms of slow and fast: the slow warming of the planet or the speed of nuclear doom.

Even a "small" war between India and Pakistan, say a dozen or so hydrogen bombs, would create stratospheric ash, blocking the sun and resulting in worldwide famine and chaos; slower than immolation, but faster than climate change.

Shaky baby steps are being taken to mitigate our human impact on the climate, but we lose sight of the nuclear threat.

Congress and the president and the Pentagon, however, haven't lost the taste for nuclear arms. Every hour in 2016 we're spending $2.19 million. The Department of Energy budget for Fiscal Year 2017 includes over $23 billion a year on the research, development and maintenance of our nuclear weapons, which does not count hundreds of billions spent on the delivery systems (missiles, bombers, strike fighters and submarines). To put this in perspective, the National Priorities Project provides interesting comparisons for what the money spent on nuclear weapons could have paid for instead.

While President Barack Obama began his service as president with a strong commitment to nuclear disarmament, under his watch the nuclear laboratories are making the possible use of nuclear arms imaginable.

We didn't used to be able to imagine actually deploying them. Back in the 1980s, when the headquarters of General Dynamics was in St. Louis, our chapter of Clergy and Laity Concerned held vigils there weekly. One of our signs read, "It's a sin to possess a nuclear weapon." And sometimes hecklers drove past and shouted "Nuke the whales!" We worried about war caused by computer error or a flock of geese, but nobody saw a tactical benefit to dropping a nuclear bomb.

Now we learn that the Lawrence Livermore and Sandia Laboratories will replace the nuclear bombs we supply to our NATO partners with the nuclear B61-12 that uses radar evasion to make it invisible, navigation controls to make it "smart," and an explosion dial to regulate the size of the nuclear impact. These enhancements erase the distinction between tactical and strategic nuclear weapons.

The fear of many experts, including retired officers who served in the Pentagon during President Obama's administration, is that it will be easier to give the order to use these small, invisible, precise nukes. In the past we built annihilation into the bombs as a protection against ever using them; now, if we build precision nukes, it's more likely we will use them.

Military author and professor Colonel (ret.) Andrew Bacevich identifies this issue of nuclear escalation as a significant unasked question of the 2016 presidential primary race, though there has been a back-and-forth recently between the president and candidate Donald Trump.

The Department of Energy, in conjunction with Congress and the Pentagon plan, is planning a "life extension" of our nuclear weapons, an expensive addition to the budget. It is difficult to determine how much all this will cost. The Congressional Budget Office estimate for our nuclear forces is $348 billion over the next 10 years, not including costs for clean-up, non-proliferation and other activities. The costs are not expected to peak, however, until after this 10-year period, pushing the total to more than $1 trillion over the next 30 years. These costs exclude congressional wish lists for new construction at Los Alamos and at the Savannah River former uranium enrichment plant in South Carolina. In addition, the new F-35 bomber which is already moving toward deployment despite many problems is said to be capable of delivering both conventional and those so-called "smart" B61-12 nuclear bombs and alone will cost over $1.5 trillion over its lifetime.

These weapon enhancements are referred to as "life extension," not "modernization" and would place the United States in violation of Article VI of the Nuclear Non-Proliferation Treaty to disarm "at an early date."

How do we respond?

We the people have been saying "no" for a long time. In The Long Loneliness Dorothy Day describes her arrest in New York for refusing to go to an air raid shelter during drills in the 1950s. In 1978, our St. Louis Catholic Worker community drove to New York for the United Nations Special Session on Disarmament, attending special events and marching with thousands. Shortly after our return home, the Clergy and Laity Concerned protests began at General Dynamics over Trident submarine and cruise missile production. We had many arrests over 10 years, a couple of 30-day jail sentences, and once, a judge ordered a group of protestors to see a psychiatrist. That order was later rescinded.

Actions against nuclear weapons have generally been local, based around key sites:

• The pit of the bomb, known as the primary, is manufactured at Los Alamos, using plutonium with a tritium reservoir. It is fissile fuel that explodes, acting as a trigger for the massive thermonuclear implosion.

Several resistance communities surround the Los Alamos laboratory, perhaps because the lab manages the site where nuclear tests were carried out until 1992. New Mexico peace groups have banded together as the Los Alamos Study Group but the annual August actions commemorating the bombings of Hiroshima and Nagasaki have been led in recent years by Pace e Bene in conjunction with Nuclear Watch New Mexico, which takes leadership in conducting research about the laboratory and taking action in opposition to its work. I was arrested there once and once at the White Sands Proving Grounds with Dom Helder Camera and Martin Sheen. The charges were dropped or perhaps never brought.

• The non-nuclear parts are made at the Kansas City Plant, newly built at a cost of about $700 million. The plant was privately built, but Kansas City invested at least $40 million in land and infrastructure. The operations budget in 2014 was about $550 million.

• The sparkplug or secondary, made of highly enriched uranium, lithium deuteride, depleted uranium and other materials is manufactured and stored here.

Storage security is a problem, as we saw when three protesters, Plowshares members Sr. Megan Rice, Greg Boertje-Obed and Michael Walli, gained entrance and sang songs and painted calls for peace on a wall of the storage facility while they waited for the guards to learn that security had been breached.

The Oak Ridge Environmental Peace Alliance  (OREPA) holds a vigil every Sunday at the Y-12 plant. Their banner reads: "The bomb started in Oak Ridge. It should stop here. Now." Their website offers taxpayer fact sheets and talking points about nuclear weapons, monthly Reflections for Nonviolent Community, and a newsletter.

Congress has proposed a new plant at Y-12, the Uranium Processing Facility (UPF). By the end of next year, more than $2 billion will have been spent designing the UPF. Stopping the UPF is a priority goal of OREPA and the Alliance for Nuclear Accountability (a national network addressing nuclear weapons production and waste cleanup).

• Engineering research and testing to extend the life of nuclear warheads and make them smaller and smarter is done here.

Western States Legal Foundation (WSLF) analyzes U.S. nuclear weapons programs and policies, reviews issues of war and the law, and serves as a center for nuclear abolition activities. It sponsors Fiat Pax, a University of California organization that addresses the University's management of the Livermore and Los Alamos laboratories. WSLF has taken the lead in linking the threats of nuclear weapons and climate change with racism, poverty and conventional wars and threats of wars.

• Pantex assembles all the parts and also stores thousands of plutonium pits from retired warheads. This plutonium has leaked into groundwater and in 1994 the Pantex Plant was listed as a Superfund site along with Rocky Flats, north of Denver, which used to manufacture the plutonium pits.

In 1981 Bishop L.P. Mathieson of Amarillo, Archbishop Raymond G. Hunthausen of Seattle, and Archbishop John R. Quinn of San Francisco all urged Catholics to oppose the manufacture of nuclear weapons. In Amarillo a strong resistance movement flourished for a time, then waned. These bishops, along with Bishop Thomas Gumbleton who continues to stand with resisters, however ragtag, enheartened the movement to abolish nuclear weapons. But many, especially in Texas, were unprepared for the forceful rejection by communities where the nuclear plants were located.

Many national organizations have also taken up the call for the abolition of nuclear weapons, joining an international call to outlaw possession of them.

Physicians for Social Responsibility organizes doctors, supports research and has taken leadership with the International Committee of the Red Cross in raising the moral and humanitarian issues raised by nuclear weapons.

Veterans for Peace exposes the true costs of militarism.

Women's International League for Peace and Freedom hosts Reaching Critical Will, the title of which is a word play on the critical mass needed for nuclear detonation versus the critical mass of public support needed to abolish nuclear weapons.

War Resisters League, the Plowshares movement, United for Peace and Justice, Pax Christi, Fellowship of Reconciliation and a dozen more groups take bites of the apple in the effort to resist nuclear weapons.

Catholics have been a strong presence in this resistance, as well as having been a strong presence in the research, development and deployment of nuclear weapons these past almost 75 years since the origin of the Manhattan Project. I've been to shareholder meetings at Honeywell, Monsanto, McDonnell Douglas, Boeing, Lockheed Martin, Rockwell — the list goes on and on — and Catholics at these meetings have told me they object to the resolutions I have presented on behalf of communities of women religious.

But I have found that standing outside of one of the nuclear plants or sitting (or once kneeling) during corporate shareholders' meetings gives a person time to pray. Pray and protest this spending of our treasure on armaments lest we use these weapons and go up in a flash of fire.

[Mary Ann McGivern has been tracking military spending and weapons production in the United States since the '70s. She writes for the Disarmament Times (U.N. Disarmament Working Group) and the Peace Economy Project, where she serves on the board of directors. She is a Sister of Loretto and a member of the Loretto Committee for Peace. She also works for prison reform.]