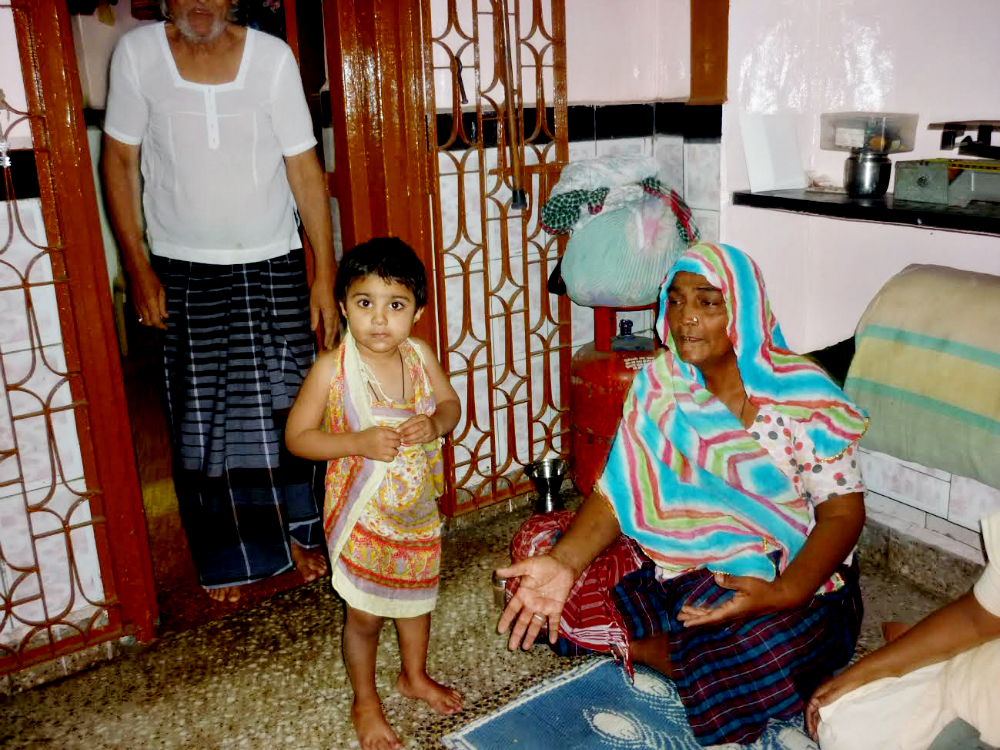 A senior transgender woman cares for a 3-year-old "third-gender" child at their commune in Nagpur, central India. Standing at the door is the commune's guru, who did not want to be identified. (Lissy Maruthanakuzhy)

Nagpur, India — My first close encounter with a hijra (a Hindi word used for transgender and pronounced HEEJ-ra) was traumatic. It was more than 30 years ago in New Delhi. One afternoon, I was alone in our convent when the doorbell rang.

As I opened the door, a woman in a sari stood with one foot on the doorframe so that I could not close it. With the bass voice of a man, the person demanded money. I explained that I had no money and there was no one else in the house. The person shouted at me and said she would return at 5 p.m. and that I should be ready with money. After a while, I became busy with other work and forgot about the person's demand.

The bell rang at 5 p.m. sharp. As no one had returned home, I explained to her my predicament. Angrily, the person lifted the sari to expose herself. I was shocked at what I saw — neither male nor female organs, but just an opening where they would have been. She then stomped out cursing me. It took some time for me to get over the shock.

Later, I learned from my sisters that transgender people resort to such crude behavior when they are really angry.

So, whenever I met a transgender person, especially during my train journeys, I pretended they did not exist.

My attitude changed after I was posted in Mumbai, western India. I met transgender people at traffic junctions, close to our convent, where they also came to ask for money. But they were different from the one I had met first. "You are religious, and do not keep money," they confirmed when we told them that we had none. They shared this information with their companions.

As my fear slowly vanished, I began to befriend them.

Our friendship grew further during a Christmas season. "We like Christmas sweets. Do not give us money," some of them told me. My companion nun and I found Christmas a good opportunity to reach out to them.

My companion also did some research. She told me hijra was an Urdu word used to denote transgender and transsexual people. It also covers cross-dressers, intersex people and transgender women who make up India's "third gender."

According to the Daily Mail in the U.K., some of these people are castrated men. They undertake a 40-day self-emasculation ritual in the name of the Hindu goddess Bachuchara Mata.

Ancient texts project them as bearers of luck and fertility, and people seek them to perform blessings and ceremonies.

Many of them eke out a living by visiting marriage venues, dressed in glittering clothes. They visit families on auspicious occasions, such as childbirths or housewarmings. People in northern India believe blessings from transgender people will bring them good luck. Some give them money out of fear of bad luck if they don't.

However, such long-standing religious respect has not protected them from modern-day discrimination. Hijras are often driven to live in communes on the fringes of society.

These communes are organized around a guru, or mother, and offer security and safety for young transgender people ostracized by their families.

In 2014, the Supreme Court of India ruled in favor of a "third gender," recognizing members of the hijra community. Although the ruling granted hijra some political and economic rights, they continue to face discrimination and ignorance.

My nun companion and I also found out that the term hijra is often used as an insult in India.

They are forced to beg because nobody would hire them for jobs. They face discrimination in all fields. Transgender people appear aggressive and irreverent mainly because of the way society treats them, my friend explained. Some also engage in prostitution.

All of this evoked sympathy in me for these people, who live on the periphery.

My interactions with them became more regular after I came to Nagpur in April 2015. I was amazed to see so many of them in that central Indian city. 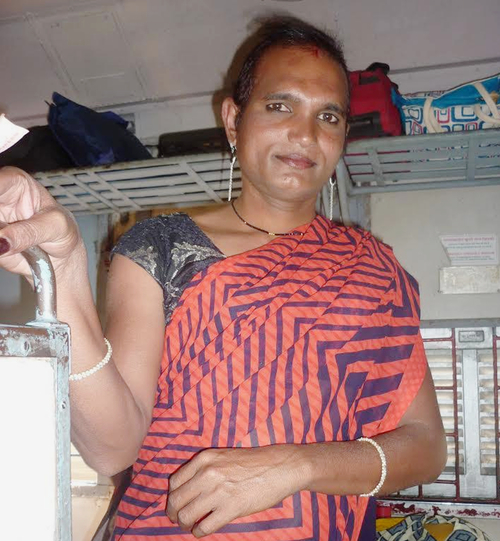 Ranila, a transgender person the author met on a train going from Nagpur to Itarsi in central India in the first week of January (Lissy Maruthanakuzhy)

During Christmastime, my companion sister and I would distribute sweets when we visited them. Sharing our time and gifts with them was fulfilling. I recalled the Letter of St. James: "Faith without action is empty."

Pope Francis, who came to the world scene scripting a new version of Christian charity, confirmed my conviction by showing mercy to those on the periphery.

The pope explains that mercy is the key to God's action toward humans. He does not limit himself merely to affirming his love, but makes it visible and tangible. Love, after all, can never be just an abstraction. By its very nature, it indicates something concrete: intentions, attitudes and behaviors that are shown in daily living, as described in Misericordiae Vultus ("The Face of Mercy").

A year ago, something prompted me to take a leap into the unknown. It was October, the time when Indians prepare to celebrate Diwali, the festival of lights. A lot of transgender people began to visit us daily at our center, two by two. They do not enter the shops or other centers, because they feel rejected.

When I saw them standing hesitatingly at the half-open entrance door, I smiled and called them inside.

I cannot forget the joy on their faces as they rushed in. We asked their names and where they were staying. As they answered us naturally, my fear about them disappeared.

Since then, transgender people visiting our center became a regular feature. They left with a book or a rosary, whatever they chose. But we gave them no money.

I also met one who had completed an engineering degree and was preparing for a government job.

Our eagerness to deepen the friendship prompted my companion and me to look for their leader. We found their place after four hours of tiresome search through city lanes.

We found them shy of outsiders, so they move in teams of two or more. This was the season when we had different groups visiting our center daily. Some do not leave us without offering cash while others bless us for being friendly.

Two of them had come in mid-November. While one happily talked to us, the other looked angry and insisted that we pay money. "See how sweetly they talk and do not give us anything," she said loudly as they left our center.

On another occasion, we met Fiza, who had built a house. She told us the money came from their collections; the commune leader gives them a percentage.

"Where do you live?" I asked Fiza.

She pointed to the senior person with her. "Come visit us," they said and shared their address.

They also told us that they go to church on Sundays. "We love Jesus," Fiza said. 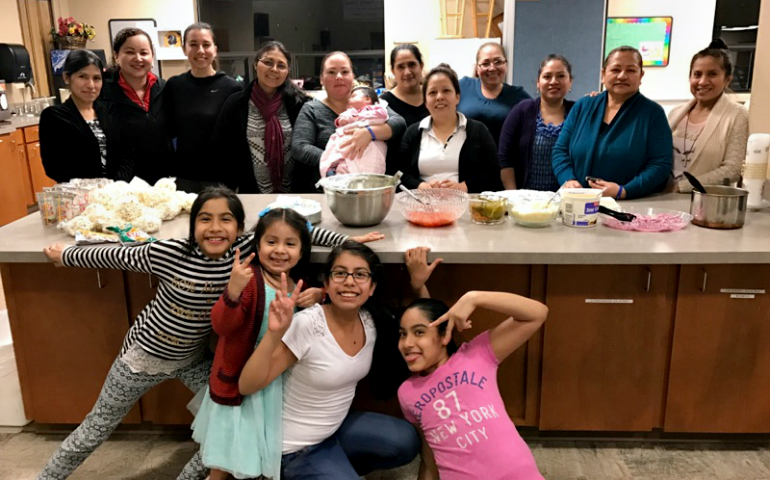 For Asma, another transgender woman, dancing is her profession. She accepted our invitation for a Christmas get-together. "I will surely come. When you invite us with so much love, how can I refuse?" she said, smiling, and shared her phone number. She also showed us a few dance steps.

We learned that some of them have bachelor's degrees. And they blushed when we commended their beauty.

In early December, we went looking for Asma. I was surprised to see a 3-year-old child with them. Asma told me the parents had left the intersex child with them soon after she was born. "We have all the government papers to take care of the child. The government has allowed free education for her."

By now, all my fears about transgender people have gone. Instead, something inside me tells me to do something more for these people so that they can claim their rightful place in society.

According to a Norwegian proverb, "That which is loved is always beautiful." If you give proper care to a flower, it will become what it is supposed to become — beautiful. Similarly, if one shows love to a person who has not experienced love, he or she can become more generous, patient and kind.

Helping these people to find human dignity will be the best gift I could offer to Baby Jesus. The Lord has created all humans equal. That is the message I could convey to these people during the recent Advent season, when we waited for Christmas.

In Isaiah 56:4-8, we read: "No foreigner adhering to Yahweh should say, 'Yahweh will utterly exclude me from his people.' "

Similarly, no hijra should say, "Look, I am a dried-up tree."

For Yahweh says this: "To the eunuchs who observe my Sabbaths, and choose to do my good pleasure and cling to my covenant, I shall give them in my house and within my walls a monument and a name better than sons and daughters; I shall give them an everlasting name that will never be effaced."

Lord Yahweh who gathers the outcasts of Israel declares: "There are others I shall gather besides those already gathered."

Women’s ordination: Can we be public?