Glory brighter than the burning napalm 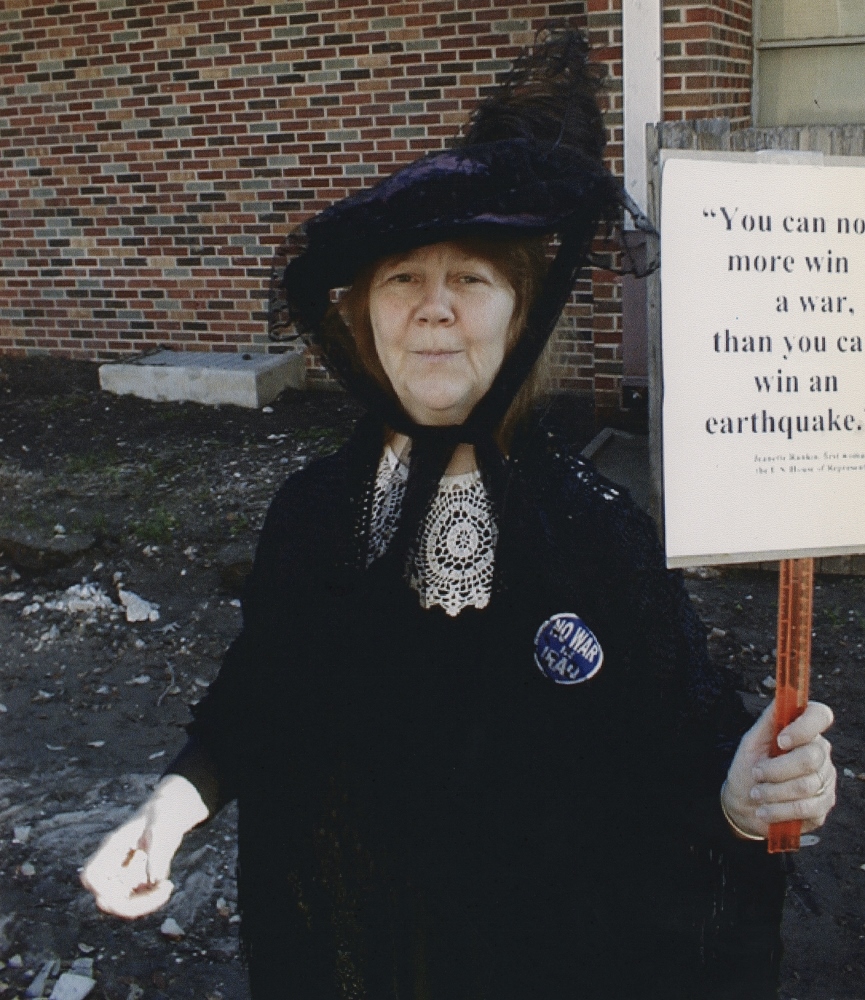 "You can no more win a war than you can win an earthquake!" I emphatically say as I dramatize Jeannette Rankin, the first woman elected to the U.S. Congress. How could I, who look like a nice little lady, get so bold! Rankin is one of the many women adamantly working to protect life that I dramatize.

One of the people who inspired me and continues to lead me to dramatic boldness was Fr. Daniel Berrigan, who recently died at 94. I recall the last time I was with him was before midnight on New Year's Eve 1999. We were sitting on the floor in a tent drinking hot chocolate right outside of the Nevada Nuclear Test Site. Two members of my community and I, joined him, Bishop Thomas Gumbleton, Fr. John Dear, Fr. Louis Vitale and others in "Millennium 2000," a retreat on nonviolence organized by Pace e Bene, a Franciscan ministry. I was grateful that I could be with them in the last hour of the century in which over 127 million had been killed in wars and genocides. That afternoon I had given a workshop on women as peacemakers and dramatized Janette Rankin with her bold words. At midnight we crossed into the test site knowing that we would get arrested but wanting our first steps into the new millennium to be a plea to stop building instruments of death.

In the second half of the 1960s when I was a young sister, we lived about 10 minutes away from one of the military hospitals that specialized in helping people who had been burned. Every Sunday afternoon a carload of us went to visit patients there. Almost all of them were coming from Vietnam with very serious burns and wounds. Most of the soldiers did not have family or friends nearby to visit them. We visited month after month. At first I would say things like, "Thanks for all you have done for the good of our country." After seeing what was happening in the lives of these people deformed by burns and lost limbs, it became harder and harder for me to see what good was coming out of this.

On May 17, 1968, Dan Berrigan, his brother Phil, and seven other Catholic activists went to the draft board in Catonsville, Maryland, and took 378 draft files. They poured homemade napalm over the papers and burned them. Later Dan explained, "We had burned papers instead of children. That was our crime." I appreciated the courageous act of the Cantonsville Nine, rying to awaken the consciences of U.S. citizens who were oblivious or confused. It was as if the Berrigans had seen personally the burned bodies of the young U.S. soldiers that I was seeing week after week at the hospital.

I am writing a biography of Carla DeSola, the Juilliard-educated modern dancer who was developing a successful dance career while searching for meaning in New York City in the 1960s. Her godmother Beatrice Bruteau, a philosopher and interspiritual pioneer who wrote extensively on Teilhard de Chardin, told DeSola to go to the Catholic Worker and listen to Dorothy Day.

Both Dan Berrigan and DeSola considered Dorothy Day a major influence in their lives. Day's absolute convictions that we encounter Christ in the vulnerable and that the violence of war is turning away from the nonviolent Christ were forming the attitudes and actions of Berrigan and DeSola. Dorothy Day's Catholic Worker community was having liturgies and DeSola was invited to share her gift of dance. This led to a life of incarnating Scripture, social justice, peace, and prayer through dance. 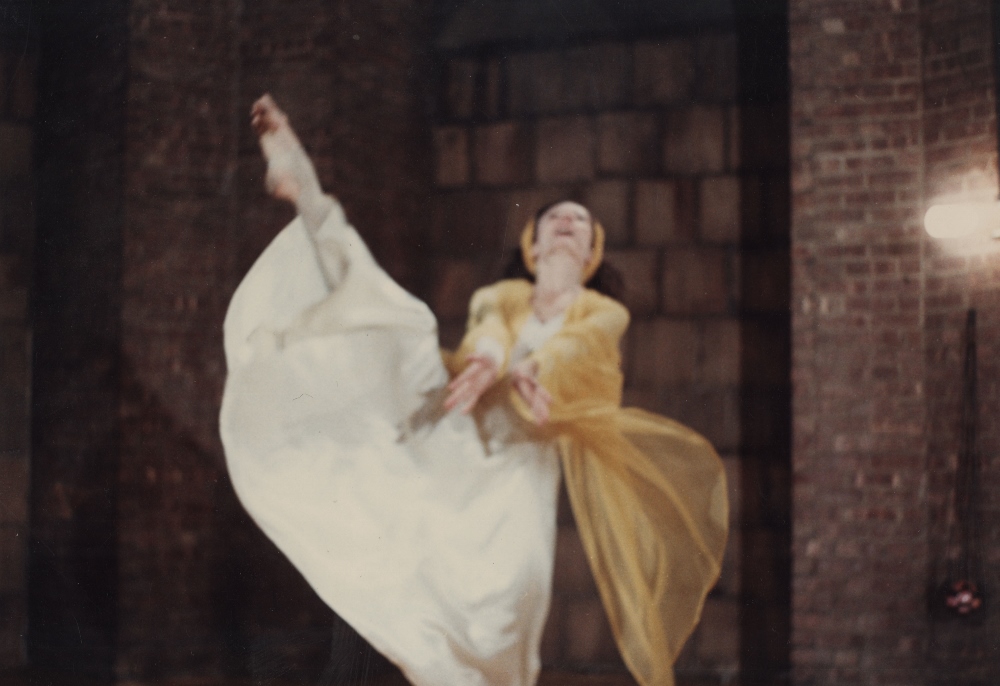 Once, friends brought Dan Berrigan to a peace gathering in DeSola's small apartment on 15th Street in New York City. In the midst of the conversation they begged DeSola to dance. She shared what she had danced in a huge rally against the Vietnam War in Central Park. In the severe pain of the daily deaths in Vietnam, DeSola might have chosen to dance her powerful lamentation dance as Mary at the foot of the cross, but she explained to me, "I chose the 'Gloria,' [from 'Misa Criolla' by Argentinian composer Ariel Ramirez] with some instinct that I wanted to proclaim God's glory right in the midst of the horror of war, to be uplifting in defiance of a spirit of war. I remember climbing onto the platform [and] seeing all the faces out there before putting my hands together, and then flinging them up and outward as the music began in Spanish, 'Gloria a Dios, en las Alturas' [glory to God in the highest]."

While musical forms and rhythms of various cultures and vernacular language in the Eucharist seem so ordinary now, Ramirez's composition was both shocking, angering some in the church, and consoling, delighting others. (The 50th anniversary of this powerful music of the "Misa Criolla" was celebrated at the Vatican with Argentinian Pope Francis presiding December 12, 2014, El Gloria de la Misa Criolla.)

Franciscan Br. Rufino Zaragoza led a pilgrimage in Vietnam in 2007, giving me a chance to pray in the country where my cousins had been traumatized and where my classmates had been among the over 58,200 U.S. people killed. And even more committed suicide after they returned home.

I stood on the road near Trang Bang where Nick Ut, an Associated Press photographer, had captured the image of nine-year-old Phan Thị Kim Phúc running and screaming with severe burns from a napalm attack, June 8, 1972. The image appeared in newspapers around the world and won a Pulitzer Prize. I felt like I could still hear her screaming from the burns, just as tensions towards Iraq were growing.

On May 6, as I watched the Eucharist of Resurrection for Father Berrigan at St. Francis Xavier Church, I could see by the altar Bishop Thomas Gumbleton and Fr. John Dear, both such a significant part of Berrigan's life and of the change of the Millennium retreat that Carla DeSola and I attended.

Prophets are suspect. Like Jeremiah, dramatically breaking a clay pot or lying on the ground in the middle of the street to get people's attention, Berrigan tried to wake people up by pouring blood on draft files, hammering on nuclear weapons, burning draft files. Dorothy Day tried to wake up people amassing wealth by living right in the midst of the impoverished.

Perhaps Berrigan died with hope, because April 11 through 13, a conference was held at the Vatican to reconsider the concept of "just war." The Pontifical Council for Justice and Peace and Pax Christi International invited people from 25 countries for "Nonviolence and Just Peace: Contributing to the Catholic Understanding of and Commitment to Nonviolence." The gathering declared the idea of "just war" obsolete and called for efforts to be focused on developing concepts and strategies of nonviolence.

I think that Berrigan could relax into God's arms, trusting that the seeds he had been planting ever since the 1960s are now taking root. Both Day and Berrigan can sing, "Glory to God in the highest; peace to people on Earth" with the exuberance that Carla DeSola dances that prayer of hope in the "Misa Criolla."

We on Earth need to recommit ourselves to acknowledging the "sin of the world" and being transformed through God's mercy into people of nonviolence and peace.

"You can no more win a war than you can win an earthquake."

Glory brighter than the burning napalm