"Because when I'm in this class I forget for two whole hours that I'm locked up in here." Shoulders hunched, head bent, the young man spoke to me from fierce focus drawing his hand, using a thin black marker pen. An exquisitely expressive human hand. "It's going on the poster we're making of the Great Radiance Phase of the universe. Because my hand began there, then. I'm going to paste a paper spring behind my hand so it will move."

"And, you? Why do you come to this class?" I sit down beside an older man who is reading an article about the origin of the universe in a back issue of Discover magazine.

"I majored in physics in college. Then got mixed up with drugs. I like getting to learn about it again."

"I am burglar. That's what I am, a burglar. I started when I was a kid. Lots of detention centers and jails. Most of my life. In this class I'm learning we're all connected because we all came from the same start. Somehow it doesn't feel okay anymore to take stuff from people since we're connected. I hope I'll be different when I get out this time."

Earlier, when the 14 men had been seated, Cece had introduced me to her class. "This is Sister Marya. We have our Earth Hope Cosmology Course because of her."

Sonoma County, California, Adult Detention Facility. Veteran volunteer, Cece Gannon, retired teacher and therapist, teaches the course. We had designed the 14-week course together in 2008, using materials written by Brian Thomas Swimme, Ph.D. However, in the several years since, the course usually extends to over three months because discussion gets so involved.

Cece begins each class with a guided meditation.

"Okay, everybody," she says. "Close your eyes." Imagine that happening in a prisoners' group. They do. As she reads, bodies relax. "Go somewhere beautiful. What do you see, hear, smell and feel? Now someone who loves you very much is walking toward you. Offers you a gift. Carefully open it."

Cece gently calls them back to the room. A really big guy is wiping tears. "My gramma came. She passed long time ago! In the box was a message for me that said 'Believe in yourself.'"

He sits there nodding his head, as slowly as the ticking of time in his cell.

Next, a sample of global music. Cece asks for the country of origin. "Latin." "Not Caribbean." "Rio de Janeiro, 1990s." Nailed it. They open their Earth Hope folders and study a world map, locating Brazil. "Cece, can you find out for me how much rainforest is left?"

Next Cece teaches a segment from the 13.7-billion-year story of the universe. She shows a DVD relevant to topic. They love learning from astrophysicist, Neil deGrasse Tyson's PBS series, "Origins."

Then they begin collaborative art work on a large poster. I join two men at the end of a table who are cutting orange and red tissue paper and pasting the tiny pieces into the billowing early universe. Others crowd over the poster drawing colorful, chaotic swirls with chalks and crayons. Some are watching a rerun of Neil.

Cece calls for the art supplies. Michael pastes his hand near the edge of the expanding young universe. They return to the circle of chairs.

An officer appears at the door. The men leave quietly, in single file. They will begin the next class with conversation based on those questions.

As I help Cece pack up her supplies and materials, I pause briefly to reflect on how privileged I feel to be part of her work in this jail. Back in the 1960s I visited former students in the Kansas City jail. I'd secretly hoped to someday find a way to ease the isolation and suffering of prisoners, perhaps even to liberate their minds and hearts to imagine a hopeful future for themselves.

I turn back to Cece. In the bustle of our hanging the poster on a cork strip, Michael's hand moves, almost freely.

[An Oldenburg Franciscan Sister since 1963, Marya Grathwohl lived for more than 30 years in African American, Crow and Northern Cheyenne communities, as teacher, principal and pastoral minister. She is the founding director of Earth Hope, and works in environmental restoration through farming, restoration and other ecology projects.] 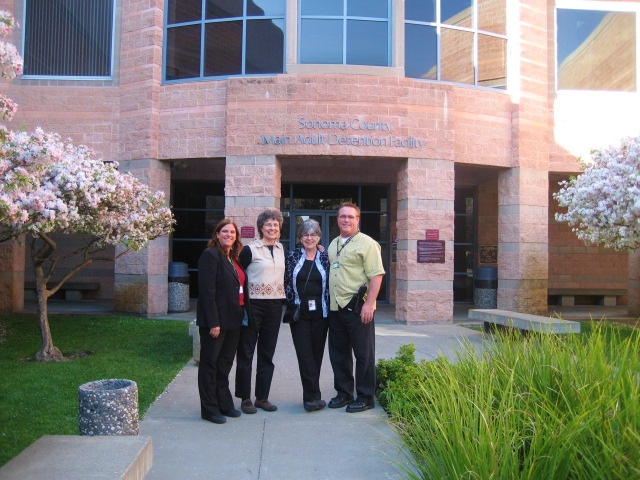