Fou, a young female "head porter" (kayayoo in the local language) spoke with a group of women religious of Ghana being trained in advocacy. Fou's husband sent her to Kumasi to make money for the family. She carries heavy loads of shoppers' and traders' wares on her head and walks long distances in the hot sun to deliver goods. She earns less than 20 cedi (about $4) a week, which she uses for personal needs, for the baby, and to send home for the family.

With her 6-month-old baby strapped to her back and a huge enamel basin balanced on her head, Fou talks about her job while waiting for a customer. She says some traders and the public look down on her and verbally abuse her. She can't find any other kind of job, because she is uneducated: She likes learning, but could not go to school because her family lived in poverty.

Female head porters (kayayei) are unskilled, uneducated migrant women, aged 7 and above. Most are from poverty-stricken families of northern Ghana who move down to southern Ghana for work. Kayayei generally live in very poor conditions and lack social protection; they are exposed to all forms of sexual and physical exploitation, resulting in unplanned pregnancies and children being raised on the street. Because their job involves lifting and carrying heavy goods for long distances, most of them suffer physical ailments.

Fou's story represents many young women trapped in persistent poverty resulting from unjust systems; they probably will live and die without experiencing life to the full.

Member organizations of the Africa Faith & Justice Network (AFJN) are largely communities of American religious men and women on mission in Africa. They advocate in Washington, D.C., for just relations between the U.S. and Africa and mobilize African grassroots efforts to engage unjust structures.

Recently, AFJN began mobilizing Catholic sisters in Africa to take on structures that keep people like Fou in perpetual poverty and hinder the sustainability of their own charitable works. The organization is building networks of sisters in Africa and conducting Gospel-based advocacy training.

This training raises the sisters' consciousness about unjust structures and provides them with advocacy tools for use in their communities. Given this training, the sisters learn how to network and to move from simply providing services to questioning how these systems impact the vulnerable people they serve. In Ghana, a network of sisters openly confronted the "head porter" issue during an advocacy training sponsored by the Conrad N. Hilton Foundation, which also provides funding to Global Sisters Report.

In May 2017, the AFJN team held a two-day gathering for the major superiors of sisters in Ghana to discuss the need for changing unjust structures. At the meeting, the sisters expressed great concern over the issue of violence against women and children, and requested advocacy training.

In particular, the sisters identified the kayayei situation as a concern, so the AFJN team targeted that issue as the focal point of the training in social analysis.

However, the sisters have varying opinions about this group. Some see the young women as social nuisances who should be forced out of their jobs. Others encourage the kaiyayei and often make use of their services.

Nonetheless, all the sisters saw the phenomenon as evidence of family and cultural breakdown; instead of the young being protected and cared for, the girl child becomes the bread winner.

Given that this exposes young women to human trafficking, all forms of abuse and sexual exploitation, we sisters took action on the eve of the International Day of the Girl Child. We did a full day's public awareness campaign on behalf of the kayayei, including advocacy visits.

As part of the awareness campaign, we paid a solidarity visit to a group of kayayei, including a media event at the corner of the Kumasi central market where these women huddle together to rest. In the heat of the day, the sisters engaged the kayayei in conversation.

Then we spoke out against the dehumanization of the kayayei, the importance of protective social and family environments, and the negative implications of raising kids on the street.

We highlighted the women's health issues, given their lack of social protection and the heavy loads they carried, and demanded that local leaders, the government and the public should work together on the problem.

The young kayayei also had the opportunity to speak to the media and the public at large. It was a delight to watch them speak their truth with courage and confidence. They explained why they migrated to Kumasi, some without parental consent, others sent by parents, husbands or other family. They became kayayei to raise money so they or their siblings could go to school; to raise capital to start small scale businesses; to learn skills; or to make money to fulfill traditional requirements like marriage obligations.

They also described some of the health hazards they face and the mistreatment they get from the public and courageously asked to be considered human beings. They asked that the government look into their situation and "stop using them to play politics by making promises to them, promises the government fails to fulfill."

The nearly three-hour public campaign was a time of mutual learning and expression of emotion for the sisters, the kayayei and some bystanders. At first the kayayei seemed closed-off and unconcerned, but when the sisters sat down beside them and spoke to them in their local languages, it was amazing to watch the intensity and quality of conversation. You could see how they came to feel valued as human beings and empowered to engage the sisters and the public. It was also heartwarming to hear some women in the crowd thanking us, and promising to partner with us to end this injustice.

But the sisters were not finished. We paid advocacy visits to the Ashantehene (the supreme leader of the Ashanti kingdom) and the Kumasi mayor and regional minister. Because of the short notice we were not able to meet the Ashantehene and the mayor in person, but we did deliver a well-worded letter prepared ahead of time and expressing our concerns and urging the authorities to use their political and traditional powers to ensure the rights and wellbeing of the kayayei and their children. We also requested more partnership between the authorities and the church in finding a lasting solution.

The minister of the region received us very well, even though he was on his way to a meeting with the Ghanaian president for the International Day of the Girl Child. He was delighted to hear what the sisters were doing, and to receive the advocacy letter. He shook hands with each of us, and promised to consider our request and to keep in touch.

At the end of the day, we were delighted with our action. We pledged to keep the momentum going by setting up a committee of sisters representing different communities and geographical areas. The committee members will plan a follow up visit to the Ashenthene, the Queen Mother, and the Kumasi mayor. We are also making plans for a trip to northern Ghana, where most of the kayayei come from, to meet with the local leaders and parents and to call the sisters to action.

Since the event, some of the sisters have been interviewed by national and Catholic media. We heard that five of the young women had the courage to leave the kayayei business, opting for rehabilitation and skill training at a center run by the Daughters of Charity in Kumasi.

[Eucharia Madueke is a Sister of Notre Dame de Namur in the Nigerian Province with expertise in social analysis, grassroots mobilization and organization. She coordinates the Women Empowerment Project of the African Faith and Justice Network.] 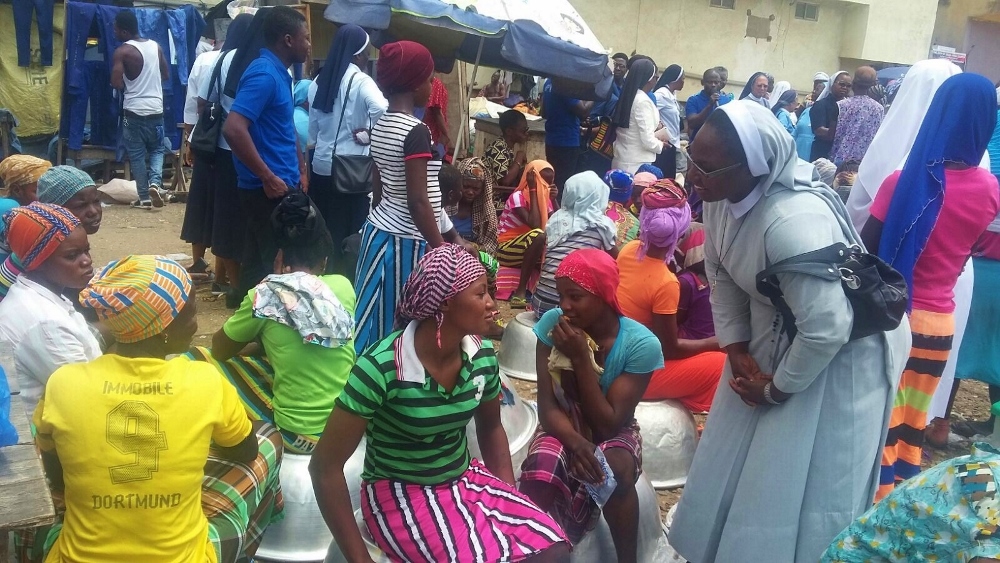 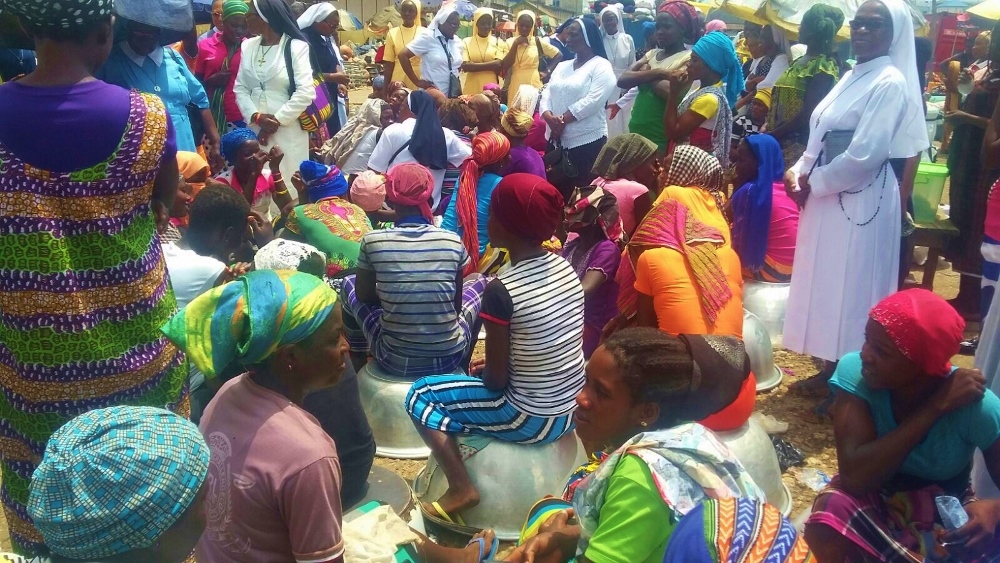