Sometimes a picture says it all.

Consider the 1963 picture of fire hoses and snarling police dogs in Birmingham, Ala., used against African-American students protesting racial segregation. Surely not our civil servants at their best.

Or the 1972 picture of the little girl in North Vietnam running terrified and naked with burning skin after South Vietnamese planes accidentally dropped napalm on Trang Bang, which had been occupied by North Vietnamese troops. The world then saw how war could hurt children.

Now, in 2014, we see citizens of Murrieta, Calif., turning back buses of women and children headed for a federal processing center, a day after Mayor Alan Long told them to let the government know they opposed its decision to move recent undocumented immigrants to the local Border Patrol station.

The first two images helped turn the tide when they awakened U.S. citizens to a shameful tragedy. We know the aftermath. The U.S. Congress 50 years ago passed civil rights legislation to guarantee basic human and equal rights for minorities that civil rights workers fought (and some died) for. We pulled out of Vietnam, a war we could not win.

We now await a moral conscience moment in the welcoming of children and others escaping the violence in such countries as Guatemala, El Salvador and Honduras. Parents and children from these countries have made the difficult decision to leave their homes and have endured dangerous journeys to cross the U.S.-Mexican border. They risk it because the possible horrors of the treacherous migration, such as trafficking, abuse and even death in the desert, still look better than possible death by gang violence at home.

Some hopes exist already. Contrast the mob in Murrieta, with the people of Brownsville and McAllen, Texas. There Catholic Charities of the Rio Grande Valley offers welcome centers at Sacred Heart Church in McAllen and Immaculate Conception Cathedral in Brownsville. The youngest guest: a 1-day-old baby girl. The baby and others are being helped by a host of volunteers.

Heroes are emerging. First might be Sr. Norma Pimentel, executive director of Catholic Charities of the Rio Grande Valley. She is convening the local faith communities to address the problem and organizing the local populace to collect food, medicine, children's sweaters and hoodies, men's sneakers, and women's socks and underwear. The city of McAllen is collaborating by providing portable shower facilities and tents for overnight stays.

Another is Bishop Daniel Flores of Brownsville. On his social media blog, he notes: "What we are seeing unfold in front of our eyes is a humanitarian and refugee reality, not an immigration problem." He adds that "the church must respond in the best way we can to the human need'' and says "at the same time we ask our government to act responsibly to address the reality of migrant refugees. A hemispheric response is needed, not a simple border response. And we ask the government to protect the church's freedom to serve people.''

Bishop Mark Seitz of El Paso, Texas, spoke before the U.S. House Judiciary Committee in late June. He called the number of children crossing the U.S.-Mexico border "a test of the moral character" of our nation. "We must not fail this test,'' he said.

Right now, the welcoming community of Brownsville and surrounding communities are acing the test. In Murrieta, the mayor and the citizens who drove back the buses need to study more. President Obama looks for ways to return the children to their perilous homeland. The U.S. Congress sits on its hands. To prepare for the test of moral character, protesters in Murrieta, the president and the Congress, might hit the books, especially the New Testament. A place to start is Matthew 25, where Jesus states: "Whatever you do for these, the least of my brethren, you do also for me.''

[Sr. Mary Ann Walsh is director of media relations for the U.S. Conference of Catholic Bishops.] 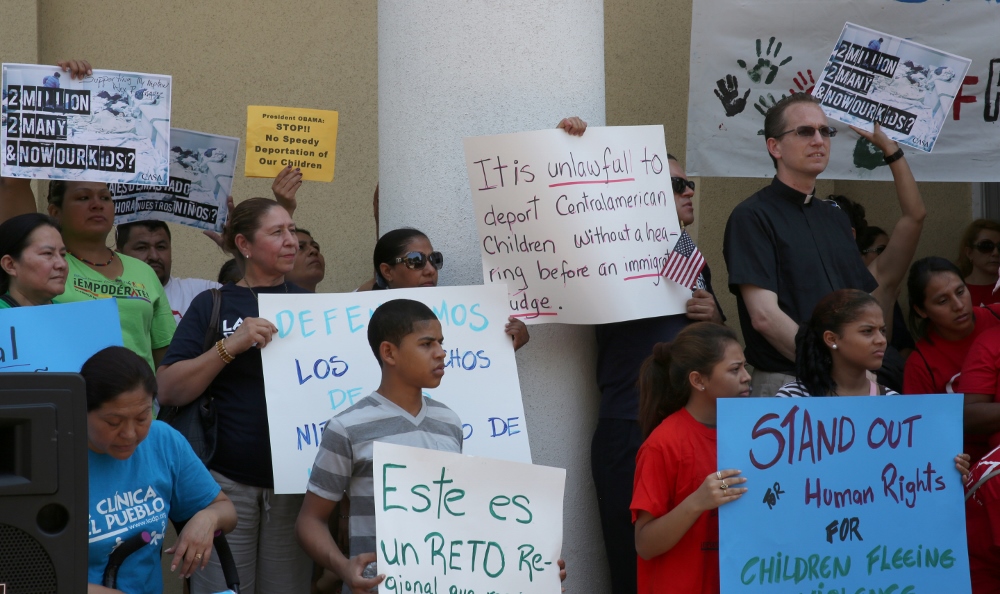