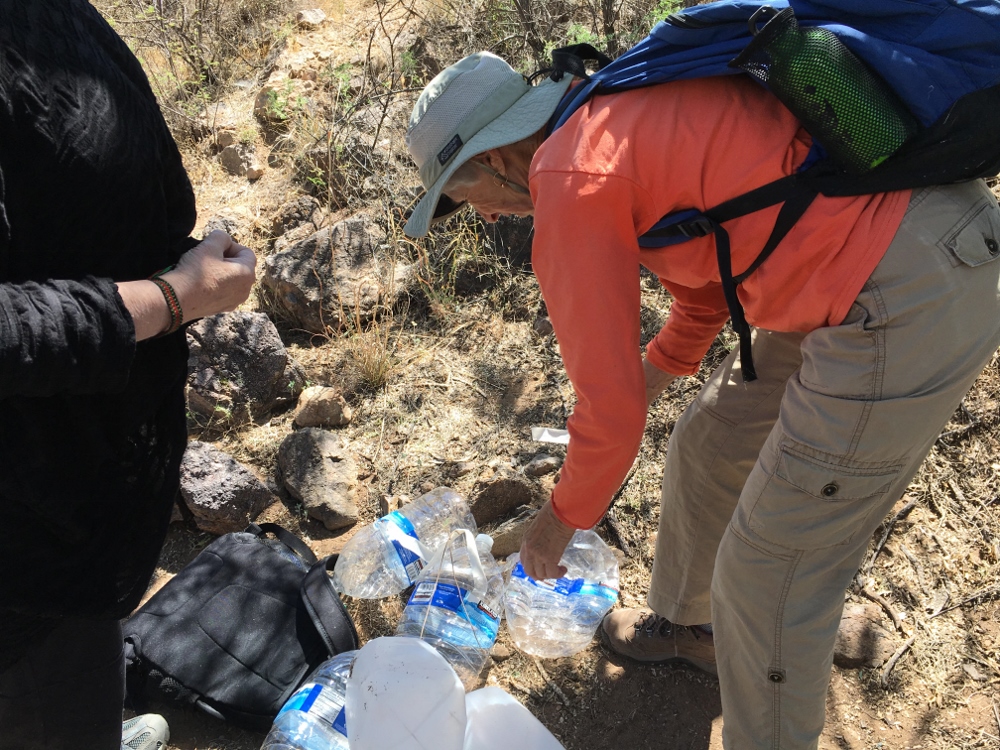 Southside Presbyterian Church in Tucson strives for love in action. Its website says it is a community of faith, hope, love and witness in the borderlands, briefly citing a history of racial integration and a vision of serving all. I visited the church in late April with a Loretto Community delegation to the border. Sarah Roberts, a church elder, met us and told us the more recent church history, beginning in the 1980s.

Parishioner Jim Corbett was troubled by the plight of the migrants walking through his ranch and spoke to the pastor, John Fife. This conversation marked the beginning of a sanctuary movement, a network that grew to more than 500 churches that sheltered undocumented immigrants and helped them find safety in communities around the United States and in Canada. The website describes the work this way:

It was a remarkable movement in a troubled time. But sanctuary was effective, and it came to a natural conclusion as many immigrants applied for amnesty and citizenship. 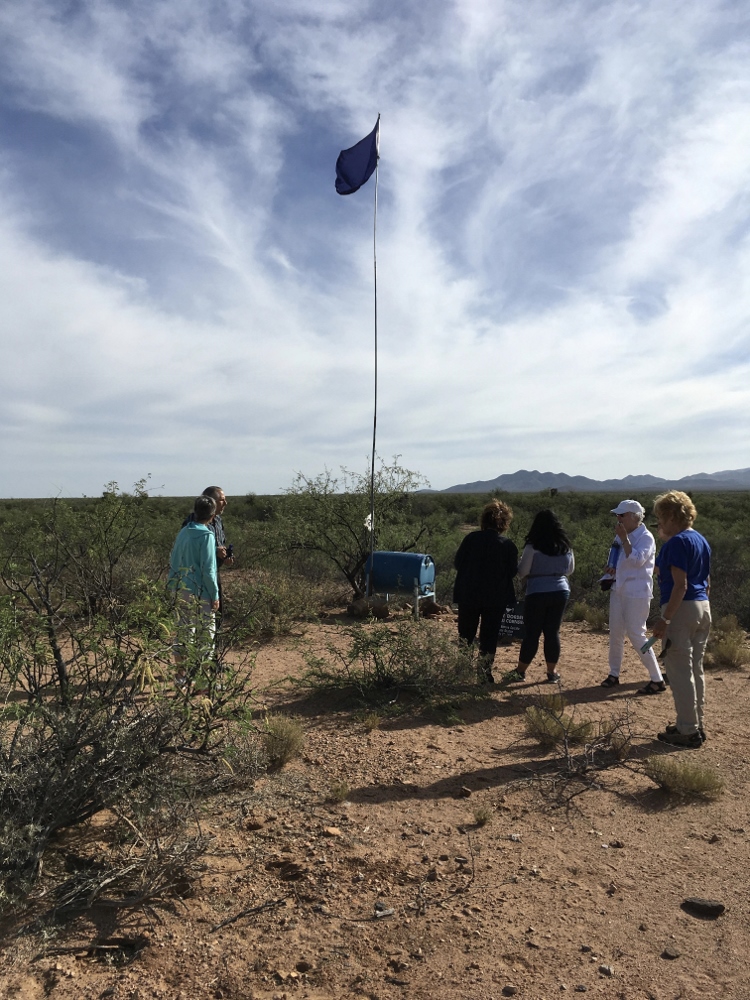 But with the start of NAFTA in 1994 and the collapse of subsistence agriculture in Mexico and Central America, mass migration began in earnest. Walls were built across the easy passages (U.S. Border Patrol policy called Prevention through Deterrence) and migrants were forced to cross the desert.

In the summer of 2000, because of the increased number of deaths, Humane Borders formed to put water in the desert for migrants. My Loretto delegation this past April went out with Humane Borders to check three of the 50 blue water barrels marked by 30-foot flags. Our leader, project director Joel Smith, said "I love the desert too much to see people suffer and die out here."

In 2002, Tucson Samaritan medical teams, housed in Southside Presbyterian, made themselves available on call to provide care for migrants found in the desert.

No More Deaths, founded in 2004, has published numerous reports on topics like the "disappeared" and the abuse of migrants and established a camp with a health clinic on private land in the desert. Because the Border Patrol (despite having a Search and Rescue unit) did not actively search for migrants reported left in the desert or respond to their cell phone messages, No More Deaths created its own hotline, with a search and rescue team.

Lois Martin of No More Deaths led some of us along one of the migrant paths carrying water bottles to check whether more water was needed. We found empty water bottles. We marked ours with hearts and flowers so the migrants wouldn't be afraid of them. I rank Lois as a "desert mother." 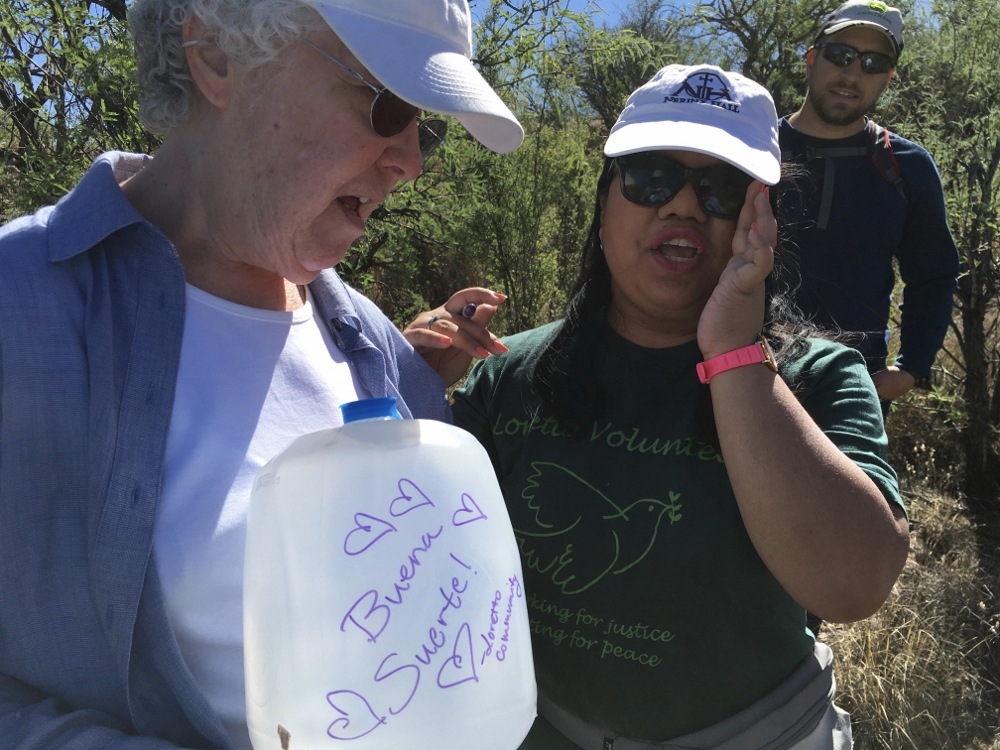 One of the water bottles left for migrants to use. (Mary Ann McGivern)

The Jesuit Relief Service and the Missionary Sisters of the Eucharist started working in 2006 through the Kino Border Initiative, providing necessities and money for deportees in Nogales, Mexico.

These humanitarian groups are all supported by faith congregations throughout southern Arizona. Other groups include the Keep Tucson Together Legal Clinic, formed in 2011, where attorney Margo Cowan has signed off on more than 2000 DACA (Deferred Action for Childhood Arrivals) applications in 2012.

How do we keep people safe? That's the overriding question behind all of these efforts that have been initiated and sustained within the context of sanctuary. Sarah Roberts of Southside Presbyterian described how her congregation provided public shelter for two undocumented persons.

In July 2014, Daniel Neyoy Ruiz entered sanctuary at Southside Presbyterian and stayed there for 28 days until he was granted a stay of deportation. He had been stopped for "heavy exhaust fumes," but no traffic ticket was issued. He had no criminal record, but the officer who stopped him called Border Patrol. Daniel was charged with illegal entry to the United States and released on bond. His attorney was ineffective and the final deportation order was issued. Daniel turned to the Keep Tucson Together Legal Clinic; the clinic turned to Southside Presbyterian and the congregation offered Daniel sanctuary.

Parishioners readied a small room and planned meals. A publicity campaign was mounted and a press release announced that once again the church was offering sanctuary. An online petition was started. Attorney Margo Cowan initiated contact with the Immigration and Customs Enforcement (ICE) offices in Phoenix and Washington, D.C. The church invited a huge gathering in support of Daniel, where everyone wrote letters citing his character, his work history, his wife and son in the U.S., and his contribution to the community. In August he was granted a one-year stay of deportation, renewed for a second year in 2015. Daniel has not been granted a third stay, but he has not been deported. 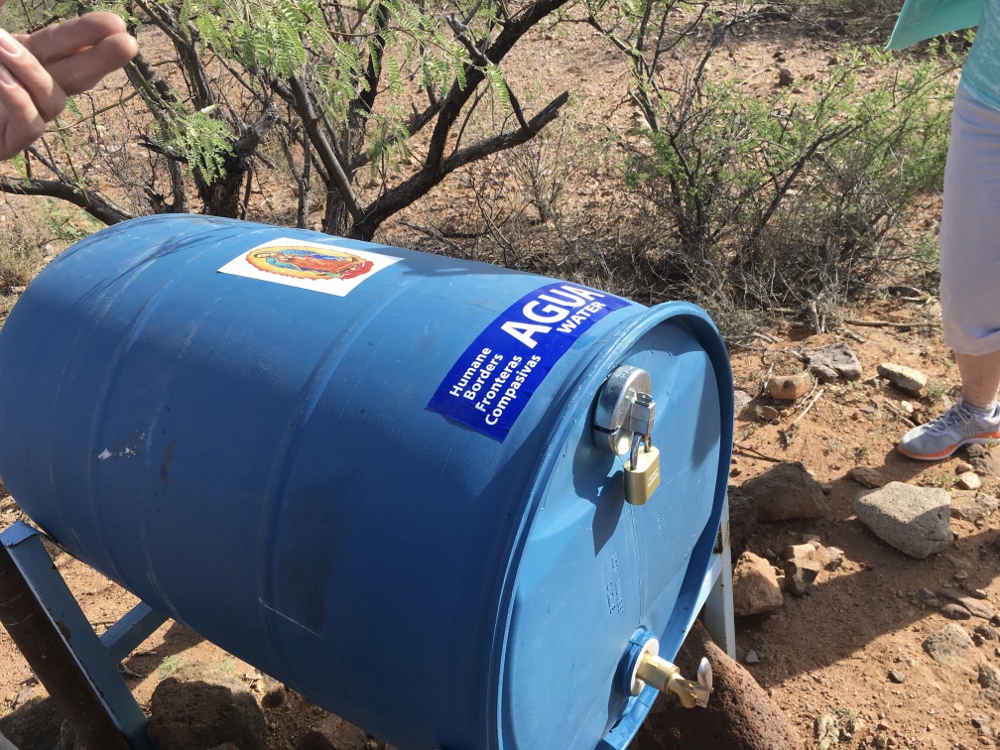 The water tank has an image of Our Lady of Guadalupe on it. (Mary Ann McGivern)

Rosa's case was tougher. In August 2014, Rosa Robles Loreto entered sanctuary at Southside Presbyterian Church. She, too, had been pulled over in a traffic stop and was not issued a ticket. Border Patrol held her in detention for 53 days despite her work history, her children (boys 8 and 11 years old) and her lack of a criminal record. Finally she was released on bond, but her attorney neglected to press for an administrative stay.

When the final order of deportation was issued, Rosa came to the church. She stayed a year and three months.

The logistics of providing food and private space while running a public relations campaign were demanding. Every evening people gathered for a prayer vigil. Twice the pastor took her older son to Washington, D.C., to plea Rosa's case. Letters, petitions and press releases poured from the church office. A poster, "We Stand With Rosa," hung in windows around the United States. In May 2016 the Department of Homeland Security gave Rosa a document that says she is not a priority for deportation; she left Southside Presbyterian and returned home.

What we know is that people like Rosa and Daniel who have homes and jobs here are not safer than they were while crossing the desert. We also know that the faith community is standing with them. Southside Presbyterian describes the community's work as a civil initiative to uphold the law. Their operating principals included transparency and maintenance of strong links with local government. They invite us to stand with them, looking forward into the unknown, seeking to keep people safe.

[Loretto Sr. Mary Ann McGivern has been tracking military spending and weapons production in the United States since the 1970s. She writes for the Disarmament Times (U.N. Disarmament Working Group) and the Peace Economy Project, where she serves on the board of directors. She is a member of the Loretto Committee for Peace and works for prison reform.]