My grace of being a companion 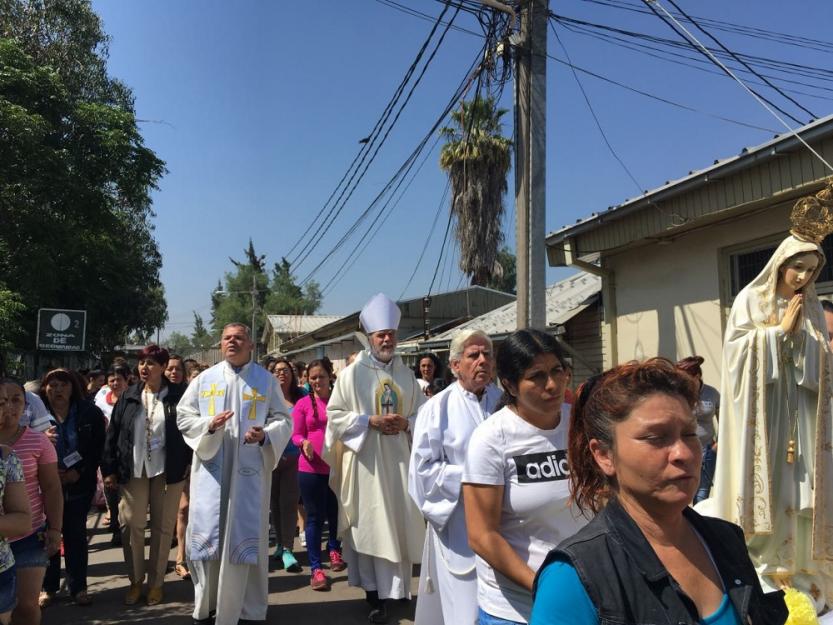 The space of spiritual direction and accompaniment is so profound! In it I have the grace to touch the sacred space of the people I accompany.

Since 2016, I have been in my congregation's Bolivia-Chile Province, studying for a master's degree in psycho-spiritual accompaniment at the Jesuit University in Chile. I am experiencing the grace of being a companion, which has made me a witness of God's path in the lives of many people.

So I was fortunate to be here for the visit of Pope Francis in Chile — and specifically, in the women's prison in Santiago. About four months ago, it was announced that part of the program of the pope's apostolic visit to Chile would be a visit with the women prisoners with whom I have been sharing my life for two years.

I'm a trapped bird
with a hidden pain
and with my broken wings
I welcome you, our friend Pope

The song starts with these words: a song written by the inmates of the female penitentiary in Santiago, full of the words and feelings they wanted to deliver to Pope Francis when he came to visit us.

It hasn't been long since this brother and friend visited us, blessed our children, listened to us, and spoke to us. Yes, I speak in the first person plural, because having the grace to accompany the women during this time has given me the opportunity not only to know their stories, but has allowed me to enter their sacred space and witness how God sustains them in their pain and opens them to a profound hope.

We are sisters in this journey in which many times our prisons are not only the physical prisons, but social structures and our own personal stories. As an inmate said to me, "my prison is not the place; my prison is the pain I bring in my heart."

I have come to realize that in Chile, as elsewhere in our Patria Grande (Latin America) we "imprison poverty." Sr. Nelly Leon uses this term often, using it in her greetings to the Pope. What did she mean? 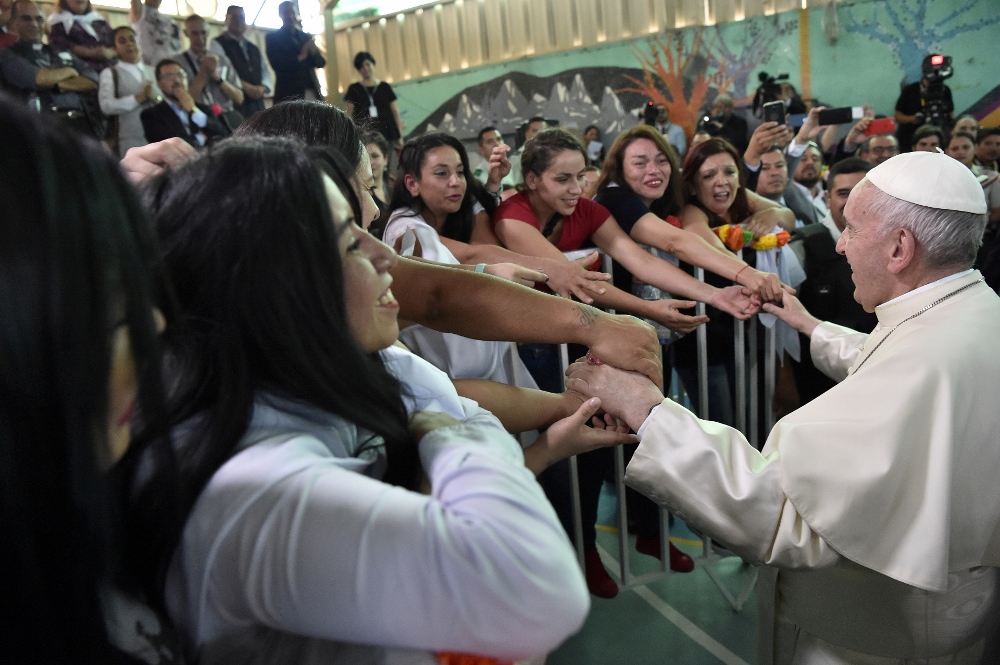 The majority of these women are sentenced for small offenses in drug trafficking and sales. Many of them lived in extreme poverty and needed to feed their children, and it was for these reasons they committed this crime.

Sadly, women in prison suffer for their crimes in more than one way: first in the actual punishment for their crime; second, in their abandonment by their families; third, in seeing their children live the consequences of their mothers' imprisonment — because they must rely on their extended family or the government's child protective services; and finally in that society punishes and marks each woman not as a person but for the crime she committed. And if they are foreigners, they suffer additional discrimination.

When we learned that Francis would visit a women's prison for the first time, we experienced many things, some of which I cannot share. What I can tell you is that we started to dream; because finally, excluded women would be the center of attention.

It was decided he would visit not only the women, but all men and women deprived of freedom in Chilean territory. Therefore, all things presented that day were made by the hands of persons deprived of their liberty, or the pastoral workers and policemen and women who work in prisons.

The gifts and ornaments we gave him included thousands of paper pigeons as a symbol of peace and freedom, and 6,000 strips of paper on which were written quotes the Pope has made in prison settings. Rosaries were made for each inmate in the country of Chile, and blessed by Francis. We made him a rosary with the semi-precious stone lapis lazuli. And when we asked the women to tell us what they wanted to say to Pope Francis, a song emerged from their own words, which they profoundly felt, sang and shouted from their inmost beings.

Many different people were involved in the preparations. For example, each one of us added a little bead to the rosary we made. They were weeks of hard work, of many emotions.

What is the experience I hold in my heart? The journey itself — of building a community that goes beyond territorial disputes and personal conflicts, to show the world that, in the words of the prisoners' song: "One more day of life, one less condemnation."

And the great day arrived! Though there was still a lot of work to do, the joy took precedence and helped us go ahead in spite of our fatigue. 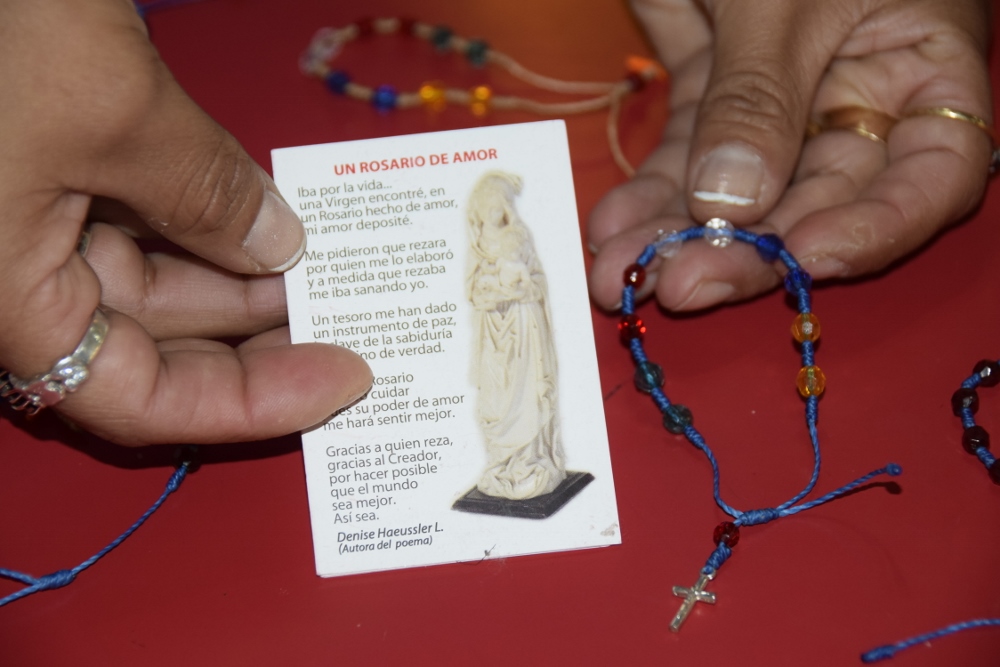 A prisoner displays a special bracelet for Pope Francis to bless on his Jan. 16 visit to the San Joaquín central women's prison in Santiago, Chile. (CNS / Jane Chambers)

When Francis arrived, he touched our babies and blessed them (the babies of the women stay with their mothers in prison in a special space, until they turn 2 years old). Our hearts felt that it was not only to bless, but to throw a challenge to society so that these little ones do not grow up behind bars, marked for the mistakes of their parents.

As chaplain, Sister Nelly spoke on behalf of all. Then Janeth, a young inmate, spoke from the bottom of her heart: "We ask forgiveness to whom we have done damage for our crimes, but don't want to imprison our children." A deep silence and tears on the faces of more than 400 women were the best response to these words.

When Pope Francis took his turn, he spoke of the intimate experience of being mothers:

Many of you are mothers and you know what it means to bring a new life into the world. You were able to "take upon yourself" a new life and bring it to birth. Motherhood is not, and never will, be a problem. It is a gift, and one of the most wonderful gifts you can ever have. Today you face a very real challenge: You also have to care for that life. You are asked to care for the future. To make it grow and to help it to develop. Not just for yourselves, but for your children and for society as a whole. As women, you have an incredible ability to adapt to new circumstances and move forward. Today I appeal to that ability to bring forth the future that is alive in each one of you. That ability enables you to resist everything that might rob you of your identity and end up by killing your hope. None of us are things, we are all persons and as such we have the dimension of hope. Let us not be robbed of our identity. I am not a number, I am not a prisoner with a given number, I have a name and I have the ability to bring forth hope, because I want to give birth to hope.

Our emotions are still so deeply felt, and we will need time to savor and dream about these words that this pastor with the "smell of the sheep" has whispered to our hearts.

I think that the most beautiful thing about this experience — beyond the political issues — is that the women felt their dignity, and they showed our society a reality that has been silenced. These women have been female prophets of our time, an earthquake for our church, which is so in need of the witness of our stories about what God has done.

[María de Lourdes López Munguía is a Franciscan Missionary of Mary from Mexico who now lives in Chile.]

Ministry | My grace of being a companion

On the phone from miles away, sister doctors in India counsel on COVID-19