Transformation to the fullness of life: We are one 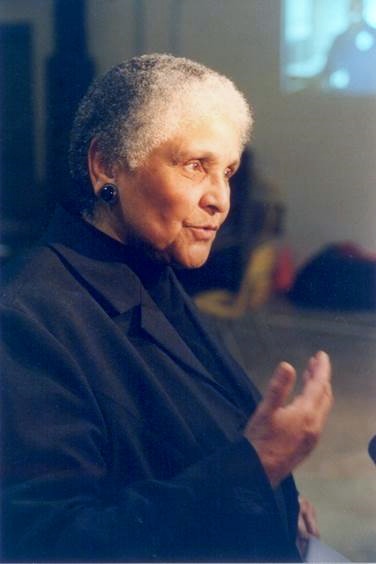 Sr. Sandra Smithson, a School Sister of St. Francis, has spent over 60 years in education and health missions in Latin America and the U.S.. (Provided photo)

A city in mourning – a nation in shock.

I, too, grieve for the loss of nine lives at historic Emanuel A.M.E. church in Charleston. I, too, hurt for their families and friends. It’s not a passing sympathetic emotion. As a black American now 89 years old, I grew up in the pre-Civil Rights South:

• My mother fought back a Ku Klux Klan-dominated police force when they attempted, unjustly, to arrest my brother.

• My father fought off a lynch mob who decided a black man had no business holding down a professional job.

• My cousin came from Mississippi to live with my family in Nashville when his father was shot to death because he was walking down the street wearing a white shirt “as if he thinks he’s a gentleman.” The whites that shot him left him to bleed to death in the hot sun while they walked on to their Sunday morning service.

• I’ve known what it feels like to be thrown off city busses and streetcars and to sit in the back of churches – when I was admitted entrance.

• I was denied access to the Sacrament of Penance by a priest who said, “I don’t hear the confession of coloreds.”

• I was rejected by Catholic religious orders that didn’t want blacks among them.

• I’ve known what it feels like to be so frozen in fear when stopped on the street by a white person that I momentarily could not remember my own name.

• I’ve known so profoundly the depression that racism generates in the oppressed: By the time I reached ninth grade, I already was asking God why he didn’t just have the whites line us all up and then shoot us. I thought a quick assassination would certainly be more merciful than death by slow and persistent harm to self and family.

Despite it all, as I grieve over the hate-filled slaughter on June 17 in Charleston, the greatest pain I feel is for young Dylann Roof.

He was not born a racist; nor with a gun in his hand; nor feeling that his life was threatened or his people’s lives diminished by the existence of other ethnic groups.

Twenty-one-year-old Dylann Roof is the product of a persistent pathological view of humanity and the aberrant scientific conclusions that undergird it. He succumbed to the “super race” deception and was not enlightened enough to extricate himself. He was a victim of false science, lust for power and control, greed and a societal illness accruing from unredeemed egotism.

There is no plurality of races. There is only one race – the human race. Like other species, humans come in different sizes, shapes, hues and genders. None of this diversity expresses superiority or inferiority by ethnic delineation of the species.

Diversity is simply one more manifestation of the magnificent and infinite creativity of God. Of the billions of faces on Earth – all with two eyes, one nose, one mouth – no two faces are exactly alike. This extraordinary phenomenon was meant to bring us to our knees in an ecstasy of wonder and praise for such a powerful Creator, not to battle lines to destroy his creation, nor to lines of demarcation setting us apart one from another.

Indeed, the Creator, himself, looked on what he had made, called it “good” and made himself, in the incarnation of the Second Person, one with creation, bringing to it a new commandment and a final prayer to complete his work.

The New Commandment: “Love one another as I have loved you.” He didn’t come to kill us. He laid down his life for us. And that final, simple prayer? “I pray, Father, that they all may be one.”

America with its expanding plurality of ethnic groups is a democracy with an opportunity to birth a society rooted in true freedom – a fulfillment and sacramentalization of that simple, but Divine hope, expressed in that final prayer of Jesus.

When we attempt to set ourselves over, above, apart and against one another individually or as groups, we set ourselves against God. Our children, then, who internalize these distinctions and then act out of them are the greatest victims of all.

And so, Dylann, I hope you will forgive us – we adults, who created and propagated the lies that poisoned your soul.

I hope you will forgive us when, in our distorted pretense of justice, we seek to kill you for your having learned too well the lessons our racist and violent social fringes have taught you.

I hope you will see, before you die – a natural death or a state-mandated murder by the very guardians of society that taught you to kill – that hatred conduces to nothing but pain, and pain to destruction, and destruction to death. But love conduces to creativity, and creativity to diversity, and diversity to beauty, and beauty to contemplation, and contemplation to transformation, and transformation to the fullness of life – that fullness of life promised by the mission of Jesus, when we are one as he and the Father are One.

Until that day, Dylann, I will pray for you, and all those young ones like you, whom the architects of the society who nourished you have poisoned with hate.

[Sandra Smithson, a School Sister of St. Francis, has spent over 60 years in education and health missions in Latin America and the U.S. In 1992 in Nashville, Tennessee, she founded Project Reflect, whose mission is "transforming communities through education and policy reform," and she continues working with poor and minority children, her "little peanuts," toward that end.]

Spirituality | Transformation to the fullness of life: We are one

I am Rachel: a midwife meditation

In the US, abundant seasonal beauty signals goodness of God