The power of African Catholic nuns needs to be unleashed 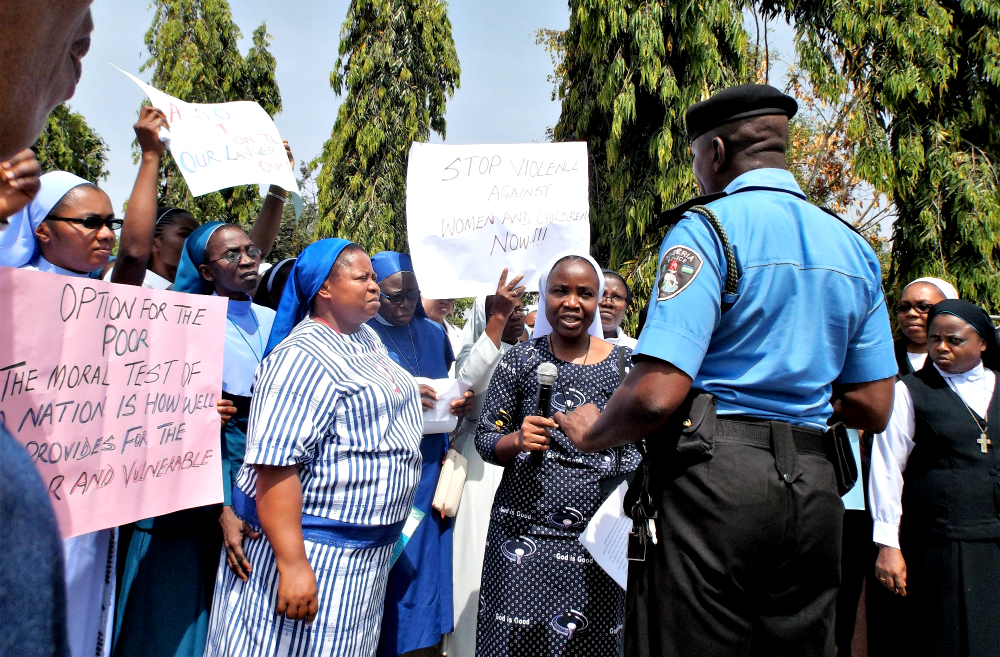 The sisters talk with police at the entrance to the National Assembly in Abuja, Nigeria, Nov. 24. (Provided photo)

Abuja, Nigeria — I recently returned from Nigeria after an exciting five days of an advocacy workshop and training for sisters there. During this workshop, 86 Nigerian sisters from 27 religious communities did what they have not done before: express their dissatisfaction in public. They spoke truth to power, bringing the needs of the people they serve to those who have the power to create change.

The workshop was focused on the structures of injustice in Nigeria that sustain poverty and suffering; the culture of waste in governance; violence against women and children; and poor implementation of gender-protective laws and budgeting. Training also included Catholic social teachings and engaging government at local, state and federal levels, and the use of social media in advocacy. The workshop was organized by the Africa Faith and Justice Network and funded by the Conrad N. Hilton Fund for Sisters and the Base Communities of Sisters of Notre Dame de Namur. (The Fund for Sisters was established by — but operates independently of — the Conrad N. Hilton Foundation, which funds Global Sisters Report.*)

The workshop was held in Abuja, Nigeria's capital, Nov. 22-27. One day, Nov. 24, was set aside to directly engage the government about issues of importance to the sisters.

It was planned that the sisters would meet and discuss their various concerns with Nigeria's senate president, the deputy senate president (who is a Catholic), the speaker of the House and the police inspector general in their various offices. While in Nigeria preparing for this conference, I made many visits to schedule and confirm times for these meetings, and while I was very well-received in these offices, no one could confirm the appointment for the visits.

Suspicious that we might not get the confirmation to get into the National Assembly where the lawmakers' offices are located, I made an alternative plan to hold a public action outside nearby. A proverb of the Igbo people of southeastern Nigeria told me that our message would reach lawmakers: "Elu nwelu nti nwee anya, ani nwele nti nwee anya," which means, "Heaven has ears and eyes and earth has ears and eyes." We rented a bullhorn (a public address system).

A day before the scheduled visit, I received an email from the senate president's office saying that the senator was indisposed and unable to welcome us. I received nothing from the other officials. That night, through one of the sisters' contacts, I approached the federal director of police about sisters visiting his office. Fortunately, he gladly accepted our request. 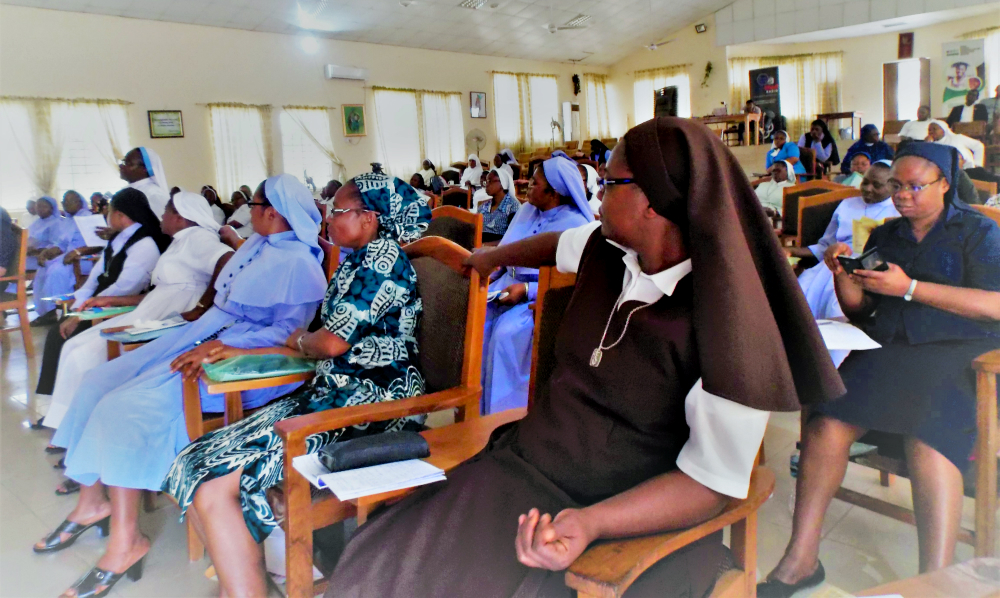 Sisters hold a workshop session Nov. 23. The five-day workshop was focused on the structures of injustice in Nigeria that sustain poverty and suffering. (Provided photo)

When I then announced the public action at the entrance of the National Assembly to the sisters, I witnessed how fear and division can stifle the pursuit of common good.

Most of the sisters openly expressed their unwillingness to appear in public to communicate their message without express permission of the bishops and the leadership of their communities. Some requested we cancel the visit until the lawmakers were willing to grant us audience in their offices; others expressed fear of what the bishops and their superior generals or provincials might say or do to them after seeing the protest in the media. Still others requested that we first write to the bishops and leaders of their congregations and ask to engage in public action. A few others expressed their boldness to go, asking those unwilling to stay behind.

The sisters' agitation created a moment of teaching. While I spoke to the sisters about our Christian duty and civic responsibility, which go beyond waiting for permission to act on behalf of justice, Fr. Aniedi Okure, executive director of Africa Faith and Justice Network, explained why the sisters did not need the permission of the bishops to engage in social action. Sacred Heart of Jesus Sr. Florence Nwaonuma, ex-president of the Nigeria Conference of Women Religious, spoke up in affirmation of what Okure and I said.

At the end, I told the sisters that a letter with details of the workshop, including scheduled visits and possible public action, was sent to all their mother generals and provincials two weeks before the conference. The same was also sent to the cardinal of Abuja. Since we did not get negative comment from any of these, I told them, it then meant that they approved our activities.

Coincidentally, the president of the Nigerian Bishops' Conference was visiting the conference center that evening. When he learned about our gathering and the pending activity next day, he jokingly asked why he was not told earlier, so that he could be prepared to bail the sisters out of jail. After that, he asked that we go with his blessing.

At last, the sisters were convinced and were ready to make a big leap the next day. Some sisters shared that friends and family had warned them about police manhandling of protesters at the National Assembly premises, but this did not deter them.

The next morning after Mass and breakfast, the sisters ignored these warnings and speculations and went to the National Assembly and the Police Headquarters. Two hired buses, each seating about 40 sisters dressed in their various religious habits, were stopped from entering the National Assembly gate by the police for not having a signed permit from the offices they intended to visit. A few of us had gone ahead of the buses and gained entry, but we went back to talk to the police about blocking the buses. In our engagement, the police accused us of not following the process. Nonetheless, they agreed with us that there was no clear process for the permit. 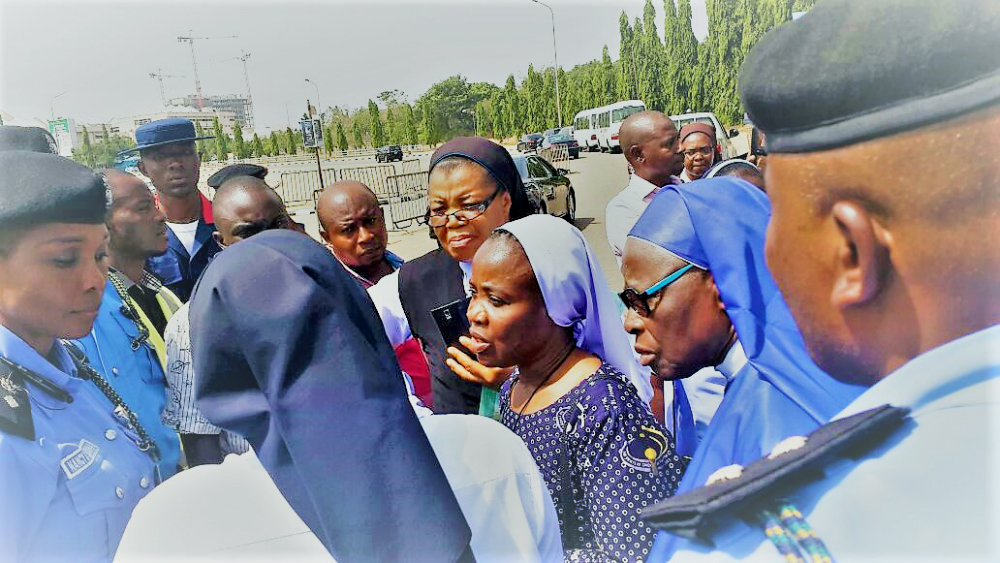 Police block the sisters from entering the National Assembly on Nov. 24 in Abuja, Nigeria. (Provided photo)

While we engaged the police, the sisters organized themselves in a strategic position beside the gate, singing and praying. The police allowed us 15 minutes to deliver our message at the gate; we took an hour. As we began praying for Nigeria in distress, and singing in solidarity with our suffering brothers and sisters, some of the police – instead of harassing us as was feared – showed interest in our messages. So also did passersby, who hailed the sisters, shouting their thanks.

Some, including police, took pictures of the sisters and of posters bearing our messages. Others joined us in saying the prayer for Nigeria in distress. One of the policewomen came to me to thank us for our action and to ask that we come back next week, promising to ensure proper authorization to see the lawmakers. We couldn't do that because our conference would be over by then, but I asked her whether she would be our ally next time. This she graciously accepted. 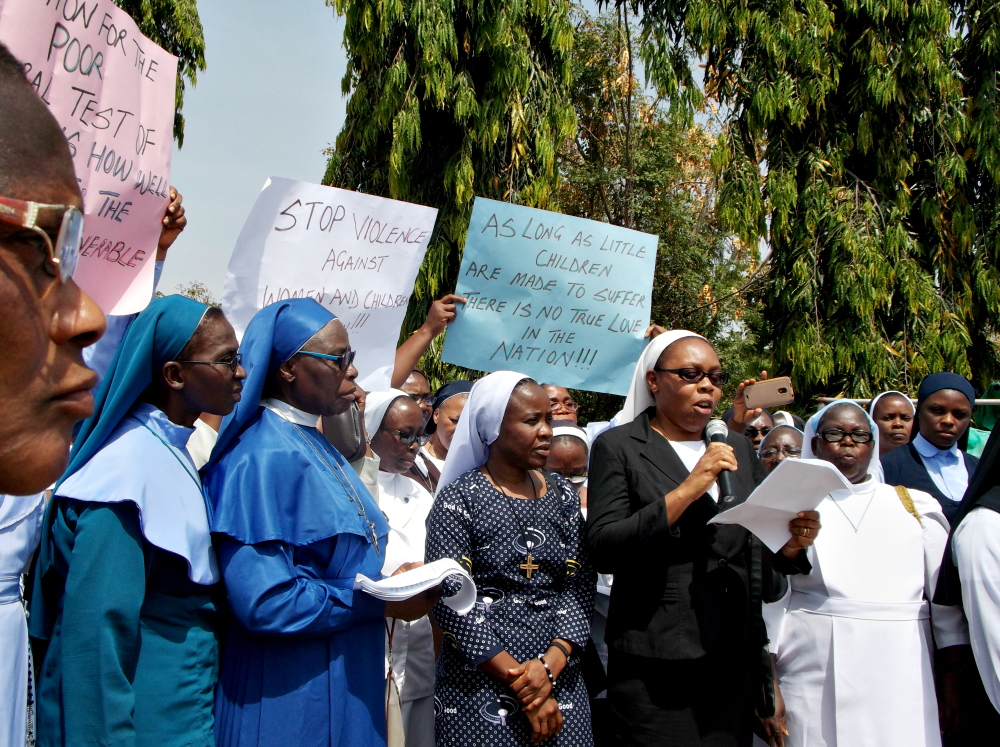 At Police Headquarters, the sisters were well-received after the staff got over their surprise at the number of sisters who came. The director apologized for the long wait before we were finally allowed into the tightly secured premises, attributing the delay to ensuring there were enough seats for everyone.

We had a good dialogue with the director of police and his staff, including the director of the Gender Unit and the Anti-Human-Trafficking Unit. At the end of the meeting, the director said that the police force needs to take the issues of violence against women and children more seriously. He thanked the sisters for their courage in visiting his office. He asked the sisters to work with police by educating their constituents to report cases of violence and abuse. He gave the sisters a series of phone numbers for various police units and asked the sisters to pray for the safety of police officers, who are killed on a daily basis. Their deaths go unpublished. 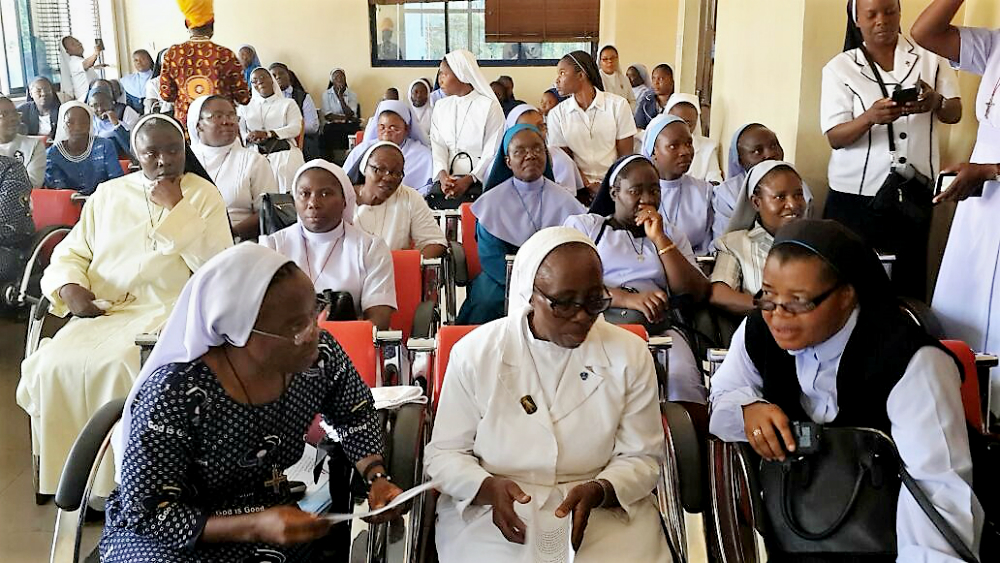 The group of sisters waits to speak to the director of police at Police Headquarters in Abuja. (Provided photo)

Afterward, the sisters were indeed tired, but happy, and satisfied about being history-makers. Looking at the sisters standing under the very hot and humid sun of Abuja, I saw their unflinching determination to deliver their messages and their courage to stand, neither ruffled nor intimidated by the police. The great power of African Catholic nuns became so evident to me, the power that needs to be unleashed and nurtured through education in social justice.

*This piece has been updated to clarify the relationship between the Fund for Sisters and the Conrad N. Hilton Foundation.

[Eucharia Madueke is a Sister of Notre Dame de Namur in the Nigerian Province with expertise in social analysis, grassroots mobilization and organization. She coordinates the African Women Project of the African Faith and Justice Network.]

Cycling With Sisters to promote social justice work for 100 miles

Challenges, uncertainty and hope mark the year for Bangladesh