The post-Easter Scripture readings of Jesus and his followers in the boat and on the sea struck me in a new way in light of the current worldwide migration crisis.

The Gospel for the second Saturday of Easter (John 6:16-21) found the disciples heading to Capernaum after the miracle of the loaves and fishes. It was dark. Jesus had not yet shown up, but they set out on the rough windy sea.

A few miles out, Jesus approached the boat, walking on the water. The disciples were afraid. Jesus greeted them, "It is I. Do not be afraid."

John continues, "They wanted to take him into the boat, but suddenly it came aground on the shore they had been approaching."

This sounds like some interesting ride in many respects. How did the acknowledgement of the presence of Jesus open the hearts of the disciples to welcome Jesus? How did the boat get grounded so quickly?

In Gaudete et Exultate, Pope Francis exhorts us to see welcoming/protecting the stranger, the migrant and the refugee as a pro-life issue, equal to protecting the life of the unborn. At this time when global migration and displacement is at an all-time high — with over 68 million human beings on the move — we have to ask ourselves why? Who/what is creating the push factors for this disaster?

In her poem, "Home," the British-Somali poet, Warsan Shire, begins with, "no one leaves home unless home is the mouth of a shark." Five stanzas down she says, "you have to understand, that no one puts their children in a boat unless the water is safer than the land." What makes people leave everything?

Did your ancestors come to your present homeland by boat from Europe, North or South America, Asia, Australia or Africa?

Did they flee famine, war, domestic violence, sexual assault, earthquakes, floods, hurricanes to risk leaving their homeland by boat — because the boat, flimsy as it was, was safer than the land?

Did your ancestors come to reunite with family? Did they come to follow a dream, to get an education, to learn a trade?

Were they lucky enough to be welcomed to your homeland when the door was open to foreign workers? Some of our ancestors were captured as slaves and treated as cargo in the holds of the ships, to be the person power to grow the country that came to be known as the United States of America.

Attitudes toward the "other" are like the winds and turbulence of the seas.

The immigration policies of the United States and of many other countries have been inconsistent over the centuries. Sometimes they are calm and welcoming, opening the door to others — sometimes banning them or building a wall.

A recent article in the New York Times described the plight of British colonial subjects who were invited to come to Britain to help rebuild the nation shattered by the World War II, as part of the "Windrush generation." From 1948 to 1971, thousands of folks came from the Caribbean on the liner HMT Empire Windrush.

Due to political changes over the decades and inattention to the legal status of the descendants of those who migrated to Britain, many of them are finding themselves undocumented in the only country they have known. How to set it right?

The consequences of colonialism are with us today in many forms. On our side of the world, U.S. military, trade, racial, social and economic policies in Mexico, Central and Latin America and the Caribbean contribute to the current situation.

A delegation of U.S. citizens went to Honduras in February 2018 to be in solidarity with the people opposed to the installation of the U.S.-backed, unlawfully elected president. On one occasion, they were teargassed and shot at by men all clothed and masked in black with no identification of name or unit. Fortunately, no one caught a bullet.

However, once the smoke cleared, they found the gas canisters identified as made in Pennsylvania. The bullet casings were also made in America! Members of the delegation later found out that the "soldiers" were from Colombia, Israel and Honduras.

Before the passage of CAFTA, the Central American Free Trade Agreement, the 22 cooperatives in Honduras supplied all the rice for Central America. People were able to stay home and provide for their families. With the influx of Riceland Rice from the USA, the farmers were moved off of their lands and into the cities; many were forced to migrate north.

For years, there has been a caravan of migrants from the Northern Triangle (Honduras, El Salvador and Guatemala) to the U.S. The current caravan is finally getting some press coverage in the United States.

However, this is not an "invasion" as we militarize the border with the National Guard! These asylum seekers left home, not for a two- or three-month vacation, but to save their lives. Shire: "who would choose to spend days and nights in the stomach of a truck unless the miles travelled meant something more than the journey?"

Under international and U.S. law, asylum seekers have the right to pursue their claims. They are not criminals. They do not need to be jailed or separated from their children. They are not to be feared.

"I want to go home, but home is the mouth of a shark."

[Bernadine Karge is a Dominican Sister of Sinsinawa, Wisconsin, and an immigration lawyer in Chicago.] 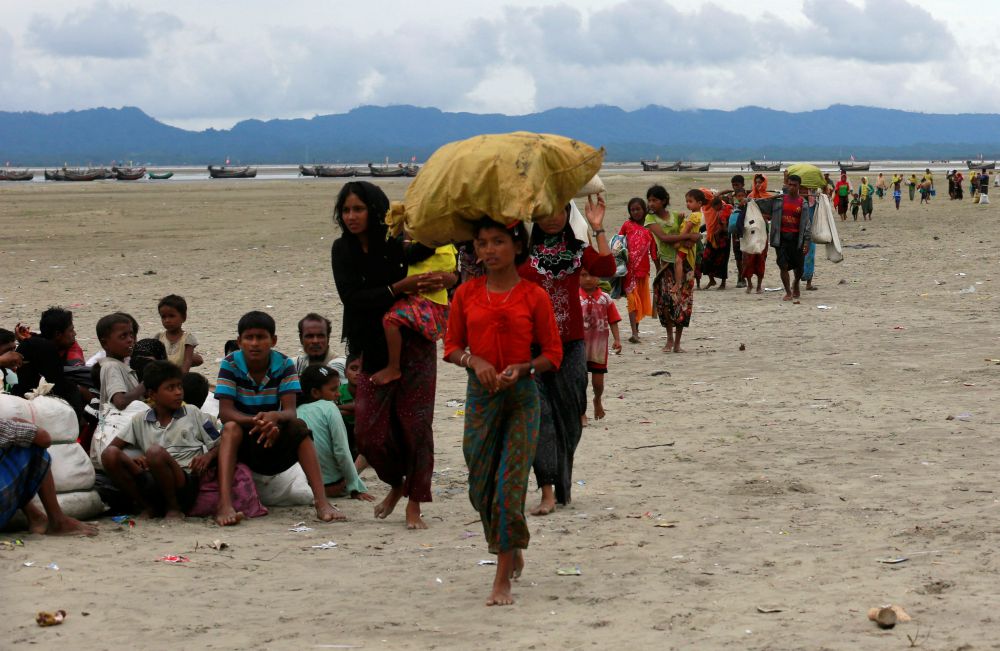