On any given summer morning, just as the sun slowly emerges from the eastern edge of our backyard, Sr. Helen Therese Scasny's beehives stir with activity, launching the day's agenda: foraging, pollinating, cleaning, communicating — all in the service of survival and, as Sister Helen says, praising the Creator. The busyness is much like an average human household getting ready for the day.

We Sisters of Charity of Cincinnati live along the Cleveland Metroparks system, a magnificent chain of 23,000 acres of natural woods, lakes, and plant and animal wildlife that winds around Ohio's largest county, Cuyahoga, and is affectionately referred to as the "Emerald Necklace."

The "Necklace" runs through cities of urban poverty, through suburbs and through charming small towns, providing for each population a variety of sports and family activities, educational exploration and wildlife studies.

Because of the richness of this environment, and her commitment to help in healing the planet, Sister Helen's idea for beekeeping developed in 2013 when she turned 80 years old.

The former teacher, congregational president and senior living administrator commented, "I wanted to do something productive in my retirement." Beekeeping seemed a natural move since she lives next to the Metroparks system.

Home to countless species of plants and flowers and with the main tributary to the Cuyahoga River flowing through it, "I thought it a perfect place for bees," she said. Add to these ingredients a few good friends for assistance and she was off on a new industry, saving bees and making honey.

A retired certified Ohio beekeeper, Ross Oriti, taught Sister Helen how to get started in the industry of creating hives, securing queens, buying equipment (most of which he gave her), and then extracting honey, straining it it, making wax items, and selling her products at the senior living residence she once administered.

"Ross had me build my first supers [sections of hives] and the frames that collect the honey and wax inside the supers. He said I would appreciate the process more and take pride in the hives if I built them first."

She decided to give the profits from selling honey to the Benevolent Fund at Light of Hearts Villa, the senior resident center she had administered, to be used for the needs of residents who run out of money, "insuring that no one is turned away."

And it certainly helps. Every Saturday, the families of residents attend Mass and purchase jars of honey, some going so far as to make orders in advance of the next harvest.

"Bee colonies are like any other social community and have a striking resemblance to religious communities," Sister Helen says, lifting the top super of a hive to check the frame of honey inside.

"The workers, all females, are versatile. They polish cells for the queen's larvae, they feed the larvae and repair and build the combs. Some of them also act as nurses for the young, and others leave the hive in search of food while some are guards at the entrance of the hive. They also carry out the dead, especially drones (the males) who have completed their only task: to mate with the queen."

She chuckles as she adds, "The males eat too much honey and do not clean up after themselves. So they are shown the door!" Everyone has a role to play to make the hive healthy and prosperous.

Natural wild bees and honeybees are all in trouble due mostly to three problems, Sister Helen explained: pesticides, herbicides and the varroa mite, considered by some scientists to be the biggest culprit in bee colonies. Sister Helen and her team are vigilant for any sign of trouble in the hives. Sometimes mice and ants are invaders as well, but they are easier to control.

According to the United States Department of Agriculture, between October 2017 and April 2018, 30.7 percent of managed colonies (i.e., five or more hives) in the U.S. were lost. More recent reports are not yet available. The extent of loss for wild bees is hard to calculate, but dead bees are often visible around fields sprayed with harmful pesticides.

Sister Helen is aware of the debate among scientists about the causes of colony loss. "I listen to both sides," she says, "and I am not a scientist, but something has to be done about the failing health of our environment, and bees are an indicator that something is wrong. Why not observe them, help them and see what they are telling us?"

Sister Helen gives presentations to local organizations on the need for clean beekeeping, defined as no lawn care pesticides used within a range of 2 miles. She is proud that our neighbors have complied.

When not tending her bees, Sister Helen studies the effect of chemicals on plants and animals and she elicits support in addressing these concerns with political leaders. She reminds audiences that Aristotle studied and wrote on the importance of bees, and the Egyptians buried their leaders with vials of honey, found undecayed in pyramids.

Bees' "history and contribution to our world is immense," she says.

She loves to describe the language bees use to tell the hive about how to find food sources, and tells about the "dances" they do to give clues about the food source direction and distance.

The mysteries and beauties of nature, especially reflected in her bees, provide Sister Helen hours of prayer and reflection. "This is a ministry as important as any I had done in my past," she says. "I face the challenge of fighting for justice to the environment, and for the care and nurturance of creation. I feel God in all of this. And I respect the noble work of God's creatures, the bees."

She likes bee behavior scientist Karl von Frisch's quote on bees, a quote that provides hours of reflection on God and the spirituality she finds in caring for bees: "The bee's life is like a magic well: the more you draw from it, the more it fills with water."

[Sr. Mary Ann Flannery is a Sister of Charity of Cincinnati who offers retreats and spiritual direction. She has held teaching and administrative positions at several local colleges, including a 20-year tenure at John Carroll University.] 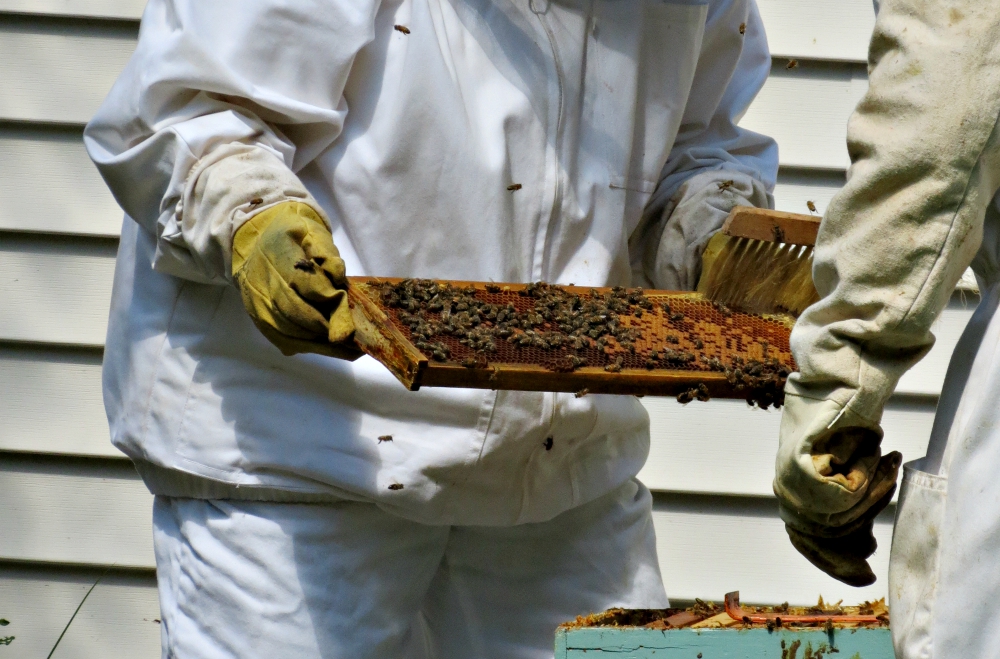 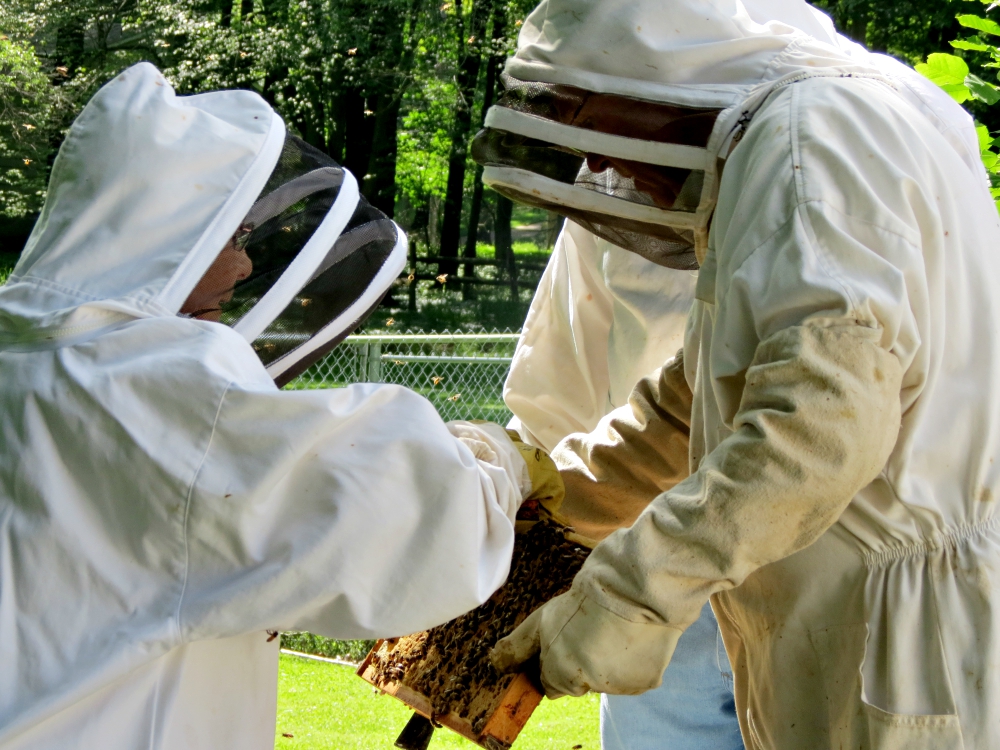 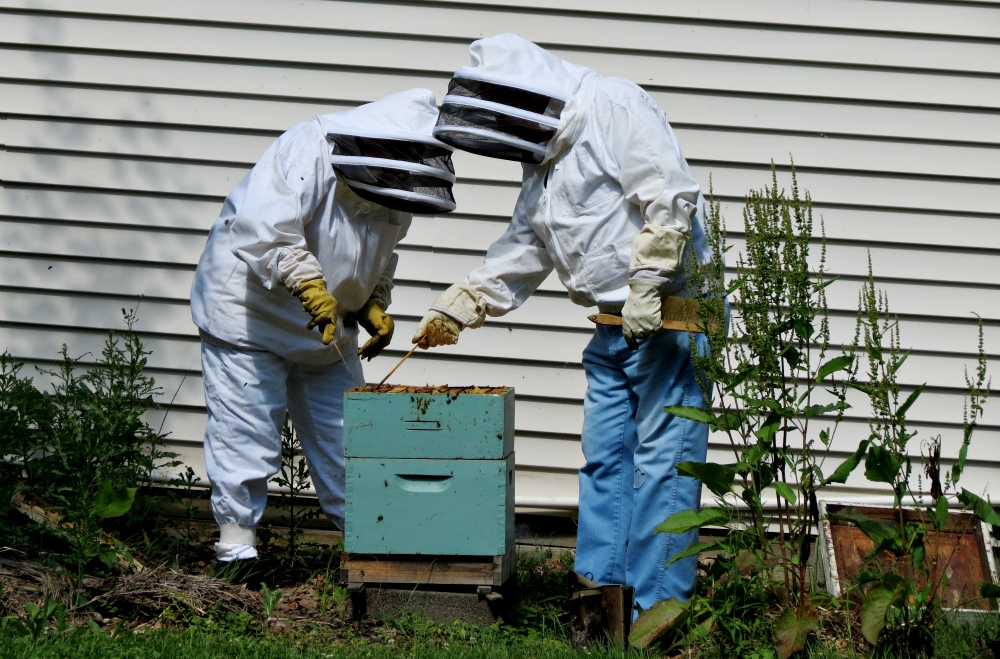