It's time again to consider civil disobedience. When does it have power and meaning? Is it ever effective? What elements go into the planning? What are the penalties, and what are the benefits?

I was at a community planning meeting recently with ArchCity Defenders in St. Louis. The ArchCity staff expects that the Department of Justice under President Donald Trump will no longer investigate problematic behavior by police departments and the courts. But executive director Thomas Harvey said the people out in the streets after Michael Brown was killed in August 2014 in Ferguson created a turning point for ArchCity Defenders. Suddenly, their municipal court filings and demands for change received hearings.

Harvey warned that civil disobedience cases themselves are problematic, sometimes dragging on for years and taking time and money. But they can precipitate change. He and other speakers suggested that direct action might be needed to force the hand of the Department of Justice. Sadly, no one is going to just give us our rights.

I've been arrested enough not to fear the consequences, though I haven't seen much in the way of results. My first arrests, in the 1970s, were part of the Gallo wine boycott on behalf of the United Farm Workers. Fifteen of us got arrested for trespassing because we knelt inside some chain liquor stores as part of the campaign to get Gallo wine off the shelves.

We didn't do much planning. We didn't have a legal observer or attorneys ready to take the case. We were very young and very polite. One of our party was a second-grade teacher, and one of the arresting officers had a child in her classroom.

The liquor chain dropped the charges and, after our third action, removed Gallo wine from the shelves. I spent a couple of nights in jail, one with a black woman arrested for shoplifting food for her children who were now left alone waiting for her. I was too young and stupid to realize I would be released first and to ask for her address to take care of the children. I also learned that bologna sandwiches — no mustard or mayo — are the jailhouse standard fare.

At the beginning of the '80s, some joined a national campaign against nuclear weapons. In St. Louis, we focused on nuclear delivery systems (missiles and planes) at McDonnell Douglas and General Dynamics. Both headquarters were in St. Louis; both made cruise missiles. We proposed through shareholder resolutions that they refuse to renew their bids to the Department of Defense.

At McDonnell Douglas, we mounted an employee proxy-vote campaign, standing at the gates as workers changed shifts. We got enough votes to present resolutions for the next 10 years.

But General Dynamics had only its headquarters in St. Louis, not any manufacturing. With no workers to organize, we conducted direct action/civil disobedience there. General Dynamics rented seven floors of a building in the financial district, and we held weekly vigils there. We decided to take our case to other building tenants. We would deliver coffee cake to the office receptionists. Forty protesters were enlisted to bake and deliver sweet treats and explain the purpose of our weekly protests. Soon, security guards were alerted, and our team engaged in guerrilla bread-fare, most team members successfully making it to their assigned office and offering their gift and message.

We got arrested there, too, maybe seven or eight times. At first, General Dynamics refused to press charges, but since I had been arrested three times but never charged, the company did agree to press charges. The county prosecutor said I — he had named me — would do jail time. I had two foster sons, so a volunteer lawyer arranged my guilty plea, along with a promise not to trespass at General Dynamics for the next two years. I did not go to jail.

One woman served a month in county jail for a later action, and others were acquitted at a jury trial where the judge threatened to send them all to a mental hospital as penalty for protesting nuclear weapons. We formed a community and got a lot of publicity, but cruise missiles and nuclear weapons are still in production.

In December 2005, Sojourners founder Jim Wallis invited protesters to demonstrate against the federal budget, calling it a "moral document." About 200 of us blocked a door at one of the congressional office buildings in Washington, D.C. We were told to bring only a driver's license and $50 in cash and were arrested in a choreographed action worked out with the police. We were taken by bus to a huge, cold room where we sat on hard folding chairs, wearing plastic cuffs behind our backs while we were checked for warrants. Once cleared, we paid our $50 and left. The contours of the budget — big spending on the military and not much to alleviate poverty — remained the same.

We planned in great detail for these and many other actions, especially during the administrations of presidents Ronald Reagan and George W. Bush, and coupled them with prayer and fasting.

In a recent brainstorming group, I suggested fasting again. One of the black protestors strongly objected, saying the police and courts had caused her enough suffering. She was not about to inflict any extra pain on herself. Indeed, my experiences of arrest illustrate my white privilege, though the arms trade is booming and most farm workers still don't have benefits or toilets in the fields.

Social change is a long and painful process. But what abolitionist would have thought in 1855 that slaves would be free in 1865? Our commitment to following Jesus demands that we feed the hungry and visit prisoners. Our study of how our society functions has taught us that food deserts and racism cause these injustices and that to obey the Sermon on the Mount means challenging systemic violence as much as working in a soup kitchen.

The Politics of Nonviolent Action by Gene Sharp is a three-volume compendium of civil disobedience that still sits, dog-eared, on the shelves of revolutionaries around the world. You may never read it, but know that direct nonviolent action has a lengthy pedigree. It structured the campaigns of abolition, women's suffrage, unionization, farm worker justice, civil rights and the end of apartheid.

My role has been foot soldier. I attend a lot of local meetings, and I've carried out a lot of local protests. I'm always on the lookout for actions ordinary people can do. Harvey said that people demonstrating out in the streets and filling up the jails after Michael Brown was killed made the legal work of ArchCity Defenders more effective. He put civil disobedience into the context of larger campaigns.

Harvey reminded me that efforts to abolish nuclear weapons, to achieve a living wage, to gain justice for the accused and to reject dictators without firing a shot are still going strong.

So if you want to stop immigrant deportation, foster civil rights, get better health care for everyone and cut military spending, get out into the streets and prepare yourself to risk arrest. It's time again to step up.

[Loretto Sr. Mary Ann McGivern has been tracking military spending and weapons production in the United States since the 1970s. She writes for the Disarmament Times (U.N. Disarmament Working Group) and the Peace Economy Project, where she serves on the board of directors. She is a member of the Loretto Committee for Peace and works for prison reform.] 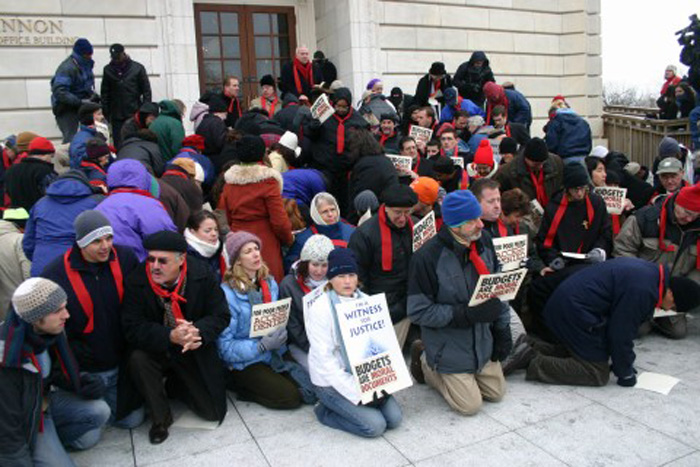