My challenges in carrying Jesus 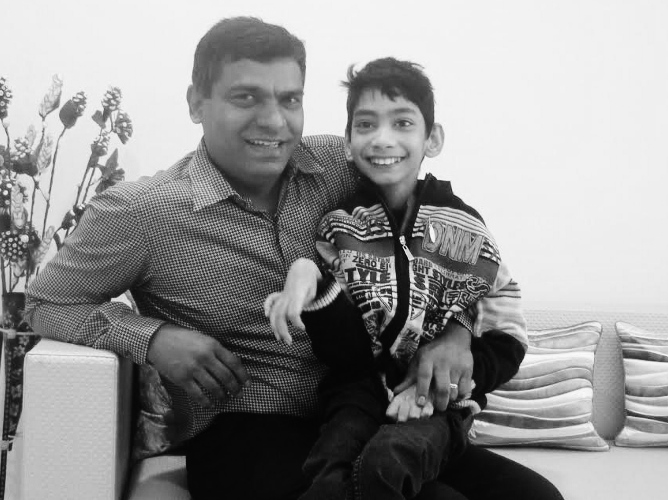 Due to his physical challenges, Aman, 12, is unable to receive holy Communion at church. He is shown here with his father in their Napur home. (Lissy Maruthanakuzhy)

"I feel very lonely," the elderly sick woman said, tightly holding my hand. She had just received Holy Communion from me. Her husband sat in the next room, indifferent to religion and rituals.

Their three married children stay away from their house in Goa, western India. "When they come, they are busy with their mobile phones," the woman continued. I was worried about being late getting back to our convent, as I had planned to go out in the afternoon with another sister.

Something told me to sit in that room with candles still burning and listen to her. The former flight attendant lived in a luxurious house with all the amenities. But it seemed the material prosperity did not bring her what she needed then — someone to talk to and share her love.

After an hour or so, when I got up to go, she pleaded, "Please come whenever you can. I like to talk and share."

That day, I decided to let go of what I considered to be my personal time and move out of my comfort zone for others.

I visited that house as part of my Communion ministry. In some parishes, especially in northern India, women religious are requested to carry holy Communion to the sick and elderly people at homes and in hospitals on Sundays, because the priests are busy at the parish.

I had the desire to carry Communion to the sick when I was 12. One evening, we saw our parish priest and sacristan on the road. The sacristan held an umbrella over the priest, although there was no sun or rain. Suddenly my elder sister whispered, "The priest is carrying Jesus," and knelt down. I followed her gesture.

"Wow, he is carrying Jesus. I don't even get a chance to touch him in the host," I said to myself. I was told that whatever we desire deeply in our heart will come to us one day.

The first opportunity to carry Communion came 10 years later, after I became a nun in 1980 in Mumbai, western India.

I was told to accompany a sister in Mumbai taking Communion to a patient in a hospital. The young man was in bandages but he had a great smile. He said he trusted in God that he would be fine. "A happy and contented person radiates joy at all times," I told myself as left the house.

A few months later, I had to carry Communion alone to the sick. I then realized the ministry was not limited to just distributing Communion. It had its challenges.

The demand on my personal time on Sundays was just one of them. After working Monday through Saturday, Sunday was the only day left for me to attend to my personal needs.

The childhood desire to carry Jesus was one thing, giving up one's free time for others was different. It was then I heard a voice within: "You are consecrated to God to serve his people." It tormented me and made me uncomfortable. I had no idea carrying Jesus would mean entering other people's life struggles.

Once, I visited a home in a four-story apartment building where a middle aged couple lived. After giving them the holy Communion I sat down to talk with them. "What did you have for breakfast today?" The woman's question surprised me.

She then explained that they often had only a cup of coffee for breakfast. For the next three Sundays I smuggled bananas from my convent for them. My sisters would not have objected, if I had told them, but I did not want them to know the family was going through a difficult time.

I was posted in Goa in early 2013. The archdiocese allots areas of a parish to different religious communities to carry Communion to the sick. Being a Catholic stronghold, Goa has many patients who need Communion at home. Each Sunday we would spend at least two hours to visit patients. Some insisted I stay longer.

Some patients could not say much; they only smiled as they remained silent. I learned to be a listener even in silence.

I met an elderly couple in Goa who lived with their 7-year-old grandson. Every Sunday the 80-year-old grandma waited for me at the door. Their home altar would be ready with candles lit where the old man sat. The boy stood nearby with folded hands. Their devotion and faith drew me often to their house. The time with them strengthened my faith and increased my love for others.

One day the woman took me to their Hindu neighbor. I met a young alcoholic man on his death bed. His mother wanted me to pray for him. This convinced me my ministry went beyond Catholic circles.

Bringing Communion to the sick in hospitals is a different challenge.

One place I had to visit was Goa Medical College. Each day was assigned to a different religious congregation. Our community was allotted two wards and a few private rooms.

Wards were crowded with people lying in every nook and corner. The nurse on duty would hand us a list of Catholic patients — around 10-15 in each ward.

On my first visit, I stood at the entrance of a ward with 80 beds. I ran away when I saw a screaming patient vomiting blood on the floor. Mustering courage, I returned after some time, since I had made the commitment to bring Jesus to the sick.

In another ward, I met a Muslim mother at the bedside of a young man. It took me three days to strike up some conversation. The man was her elder son who fell ill immediately after completing his engineering studies. The family was expecting him to support them. The woman stood near his bedside night and day, making that corner of the ward her home.

"Please pray for him," she told me one day. "Allah gave him to me. Allah knows what to do now. I trust him." I prayed silently and praised God for the woman's faith. Even today I remember her faith and courage.

When the non-Christians saw me distributing Communion to Catholics, they would request me to pray for their sick. They believed prayer could bring miracles. I felt Jesus worked more miracles in their lives.

After I got over my aversion and fear of the hospital wards, I focused on people's faith and love. Their pain and difficulties encouraged me to give up a part of myself: my time.

The visits also helped me to know many aspects of human nature.

Elderly parents are at the mercy of their children. A rich, old woman pointed to a maid with her and said with tears, "My daughter arranged for this maid, but complains that all her money is wasted on me."

I cried when I met a 12-year-old physically challenged boy in a luxurious apartment. He could not stand or walk. However, he manipulated a mobile phone with his fingers to download favorite movies. The grandparents had taught him prayers and instructed him in faith.

"Who taught you to read," I asked him. He looked at the picture of Jesus. Although he had no formal education, he pointed out the correct words. He said Jesus taught him. 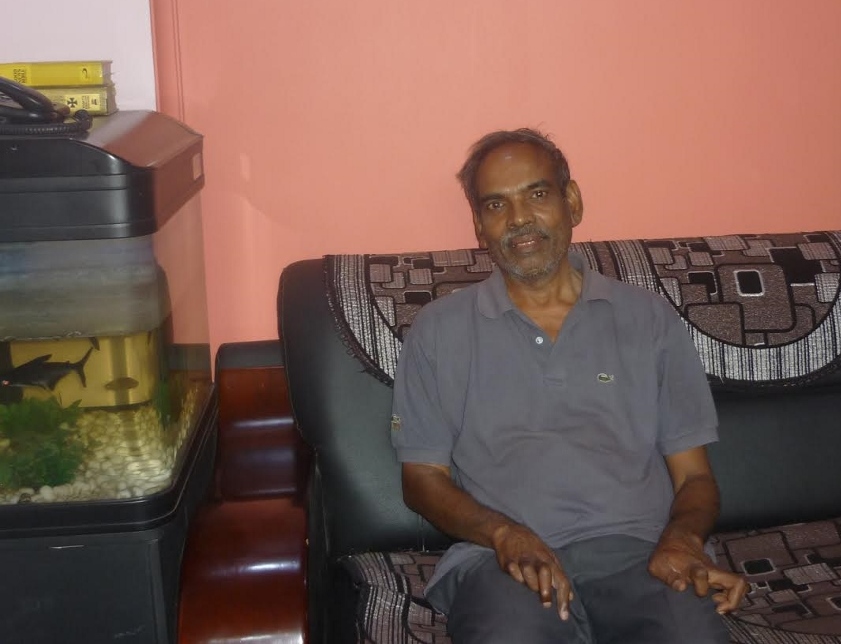 A marine mechanic whose hands were injured, awaits taking Communion at his home in Nagpur, central India. (Lissy Maruthanakuzhy)

Their neighbor was a 50-year-old marine mechanic who had an accident that disfigured both his palms. His neck ached and he could hardly walk. His son, too, fell ill just as he was about to get a job. I used to spend more than an hour with the family and they would pour out their pain.

"People we helped have forgotten us after the accident," he told me one day. I learned that the family had gone out of its way to help its relatives. "I am sure God will help us to tide over the pain and difficulties," he often said.

What I have noticed in all these people was a longing for someone to share their pain and grievances. Listening helped ease their pain.

My consecration to God as a religious is to ease the pain of his people. To become a true religious, I have to walk into their sorrows and pains, forgetting my comforts and conveniences.

As I sit with these people, I recall the evening decades ago when I knelt down on the road as Jesus passed by. Jesus has granted my desire. With that he also allowed me carry his people's burden in my little way.

Ministry | My challenges in carrying Jesus

A special way of doing ministry in Vietnam