The scarcity of African women biblical scholars continues to impact the "everyday" grassroots theology for both women and men on the African continent.

The deficiency of women's voices in African theological discourse compels women — religious as well as lay — to depend on the dominant, male-centered theological reflections for insights in both spiritual and secular matters.

Consequently, the full import of spiritual empowerment and overall development that such reflections might offer is lost on the final recipients.

The reason is not far-fetched; theological reflections carry with them some gendered sensibility that often is not accessible to the "other." Almost devoid of feminine sensitivity, these interpretations, therefore, hardly prove liberating for women.

But some of that is about to change. With increased consciousness of incarnating the Word in the culture of a people, the concrete roles of cultural agents — women as well as men — can no longer be ignored.

We see this awareness in the increased number of African women religious embracing the field of exegetical research, an area still controlled by men. So it was indeed refreshing to have eight African women religious who are biblical scholars at the 18th Biennial Conference of the Pan-African Association of Catholic Exegetes (APECA, PACE).

The conference, held in the Atakpame diocese in Togo last September, recorded the largest number of women to attend the APECA Conference thus far. At Atakpame, African exegetes met to discuss and deliberate on the global concern of the moment, migration. The theme was "Migration in the Bible."

It is noteworthy that the eight sisters at the conferences came from eight different communities. I consider this a good sign in that the sisters see themselves as agents of evangelization, in a new way, to their communities.

I gathered from my interactions with the sister-participants that each has a burning desire to be able to "enflesh" Scripture in her culture, and most of all in fidelity to her community charism, always with the assistance of the Holy Spirit.

The women appear poised for the task ahead, encouraged by the Pontifical Biblical Commission Scripture documents, which state that "feminine sensitivity helps to unmask and correct certain commonly accepted interpretations that were tendentious and sought to justify the male domination of women."

Franciscan Sister of St. Joseph Margaret Aringo, a first-time participant, expressed her joy at the active participation of the women scholars, and for the mentoring she received at the conference. Sister Margaret said she experienced a sense of empowerment to declare "thus says the Lord," both within and outside her religious community by employing those cultural realities that will provide the soil for the adoption of the Word of God.

Although it may be a cliché that Christian orthodoxy seems not to agree with religion "on the ground" in many parts of the world, I think that women's biblical scholarship is a concrete step toward solving this dilemma, at least in Africa.

Undoubtedly, both lay and religious women have played a more active part in exegetical research in the West. They have also made tremendous progress in "unceasingly feeding God's children with the divine word" (Dei Verbum).

But that has not been the case with us in Africa. Several factors, one of which is the dominant male culture, kept African women away from the field of biblical studies. But the day is dawning for women's biblical scholarship in Africa.

An Igbo adage puts it this way: mgba nwata tetare ura bu ututu ya; loosely translated, this says that "whenever a child awakes from sleep, then begins its morning." Our morning has come and we shall carefully read again the exhortation of Dei Verbum, 23: "Those sons and daughters of the Church who are engaged in biblical studies to continue the work they have so happily begun, with total dedication, with energy constantly renewed, and in accordance with the mind of the Church."

It is this mind of the church, fertilized by the rich charisms of their different communities, that women exegetes bring into their interpretative process. But women must not be oblivious of the attitudes that ignore or play down their interpretive approach. Attempts to diminish women's contribution to the theological discourse leaves us with a theology that appears to be devoid of the feminine face of God.

Much as the worrisome issue of the current migration crisis formed the crux of the deliberations at the Togo conference, this theme could not have been more appropriate as we witnessed a small band of women migrate from the culture-bound service ministries to the more theoretical world of theological discourse that provides the foundation and gives meaning to the good works that God invites each one of us to embrace daily. 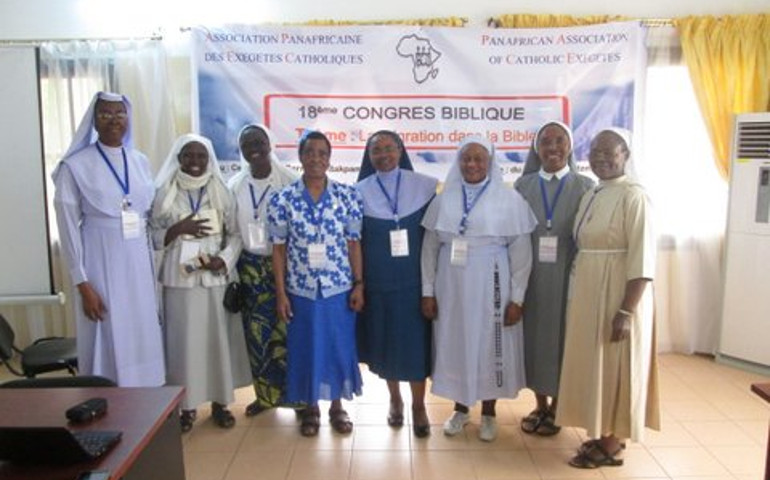 Sister-participants at the 18th Biennial Conference of the Pan-African Association of Catholic Exegetes, September 2017, in Togo. (Caroline Mbonu) 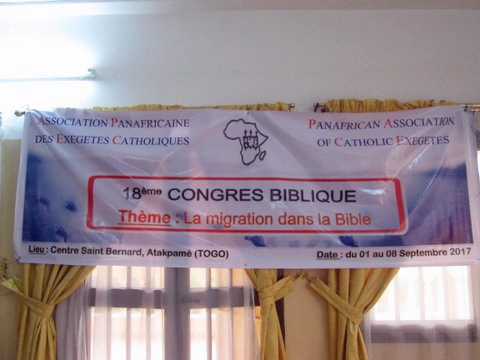 Image
Sister-participants at the PACE Congress in Togo, Sept. 2017..JPG