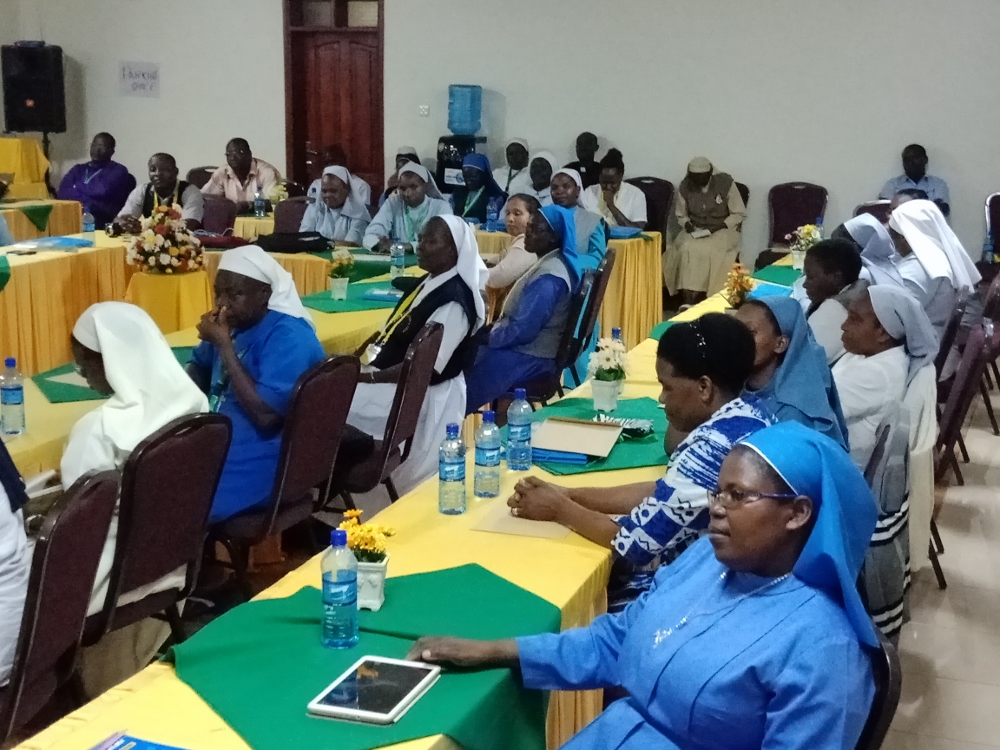 Sexual abuse is a widely discussed topic today. It has cut across families (often in the form of domestic violence), spreads even to religious institutions, and is often used as a weapon in conflict situations. Many have experienced this humiliating trauma, and felt its stigma. We are overwhelmed and concerned about it as if it were a cancer! Few could be aware of its magnitude unless they are close to its reality.

In the Great Lakes Region of Africa, consecrated women and men who have been exposed to the realities of sexual abuse were urged to address its horror through a wakeup call at two formation workshops about "Compassionate Response to Victims of Sexual Abuse in Conflict Situations," held in Goma, Democratic Republic of Congo, and Kampala, Uganda, in 2017 and 2018 respectively. They were dynamic workshops that drove concepts home with group discussions, presentations, role plays and the like.

I was invited to attend the workshop in Kampala as the Association of Religious in Uganda (ARU) Justice and Peace Executive Committee Secretary, and a member of the hosting team. We felt this was important to chart our way forward to enhance our justice, peace and integrity of creation activities.

The workshops were held in partnership with the Justice, Peace and Integrity of Creation Commission (JPIC) of the Union of International Superior Generals (UISG) in Rome, at the request of the British government, represented by the United Kingdom Embassy of the Holy See.

The first workshop was organized and hosted in 2017 in Goma, where sexual violence has been used as a weapon of war. As woman activist Lina Zedriga Waru says, "the body of woman is the battle field for the perpetrators."

In Uganda, it was hosted by the ARU in August 2018, with the concept developed to suit the relatively peaceful Ugandan context. As a Ugandan serving in the Diocese of Lira in the northern part of the country, I was very glad to be there, because this workshop provided answers to most of the questions I had about justice. It is where I resolved to focus on the cause of justice, peace and integrity of creation, in the face of injustice and insecurity in this planet.

In his opening remarks, Archbishop John Baptist Odama of Gulu, who is the chairman of the Uganda Episcopal Conference, urged the consecrated persons participating to embrace the healing and evangelizing ministry of Christ while caring and walking with the victims:

…care and walk with the victims in conflict and in peaceful times… Trauma, poverty, disease, displacement and unemployment are characteristic today… I was installed archbishop during the Lord's Resistance Army (LRA) insurgency; I have experienced and lived in conflict environment. Having talked to people through a little child who rejected war, I set out to advocate for peace in the region and beyond in collaboration with Acholi Religious Leaders Peace Initiative —

Having said this, the archbishop went down on his knees and apologized on behalf of his male counterparts who may have similarly abused female pastoral workers.

This international workshop, meant for consecrated persons working among victims of sexual abuse in the Great Lakes Region, is considered a pilot project. A facilitator noted that its objectives were to: "make better known in the region the "International Protocol on the Documentation and investigation of Sexual Violence in Conflict"; deepen understanding on sexual abuse in a conflict environment and the legislative policy framework; agree on ways to mitigate sexual violence; [and] develop a compassionate pastoral response."

Based on the trust and confidence the common people still have for priests, consecrated persons in these conflict zones, the U.K. Embassy and Union of International Superior Generals requested a partnership of consecrated people as compassionate companions of the victims. Hence, a professional team from the U.K. developed an International Protocol on the documentation and investigation of sexual violence in conflict for the participants. (This was in addition to the Protocol referenced above.)

The first phase of the workshop presented pastoral and psycho-social approaches, and two days were dedicated to study of the protocol. Topics included an understanding of the fundamental principles of the vocation and mission of consecrated women and men in Uganda before, during and after conflict, in the light of their compassionate master Jesus Christ. Catholic social teaching and a biblical perspective were presented by Fr. Richard Nyombi of the Missionaries of Africa, and Fr. John Mary Mooka Kamweri.

Among others who presented papers were Fr. Richard Nyombi, former Director of John Paul II Justice and Peace Centre of Kampala; and Lina Zedriga Waru, a retired high court judge, the director of a women's peace and security organization, and secretary of Uganda's National Committee for the Prevention and Punishment of the Crime of Genocide, War Crimes, Crimes Against Humanity and All Forms of Discrimination.

The presenters led participants into understanding the concept of peace, conflict, war, violence and displacement — using Uganda's historical context, the situation in neighboring countries, and the topic on "sexual violence as a terrorizing instrument in armed conflict and managing post-conflict trauma of sexual victims." Discussion was ably handled by Ugandan facilitators and a team of two women from the U.K.

The interaction between pastoral workers and lawyers of all sorts — especially women lawyers —  threw light on sexual abuse, which has been causing moral decay as it thrives on silence. It brought to light the limitation and manipulation of protocol, which underlined the need for a trustworthy network.

In her concluding remarks Sr. Sheila Kinsey from the office of Union of International Superior Generals exclaimed: "An army has been formed to reach out and stand against sexual abuse and violence." Association of Religious in Uganda Secretary General Sr. Margaret Kubanze added: "ARU is sending you as ambassadors to the community. Engage the people and work out an approach to deal with this challenging situation. UISG is committed to see this project going forward." 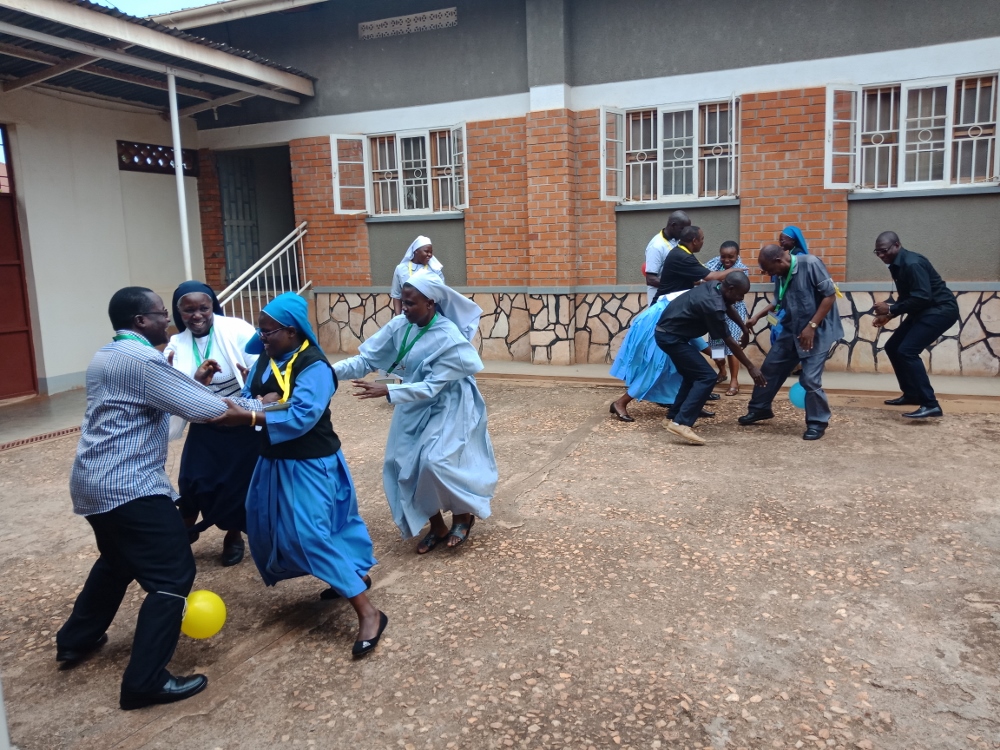 Participants agreed to use the information for effective and dynamic pastoral work and resolved to serve through partnership and networking, bringing together people with similar objectives to attain common goals and making referrals where necessary. The participants pledged to raise their voices more loudly to address these complex issues.

The participants graduated with a certificate of participation and resolved to work together in their own Ugandan ecclesiastical provinces to combat sexual violence and help its victims.

At the end of the workshop I felt part of the "army" that has been formed to stand against sexual violence. This sendoff ceremony made me feel challenged to battle abuse in all its forms. My mind was racing with practical ideas on how to embark on advocacy and lobbying against sexual abuse in all aspects of human life and society. My team and I are eager to use the radio and other available platforms for addressing this.

The gift of the Holy Spirit in COVID-19 days

Sr. Elise García is a bridge for sisters, younger and older, as she assumes LCWR presidency