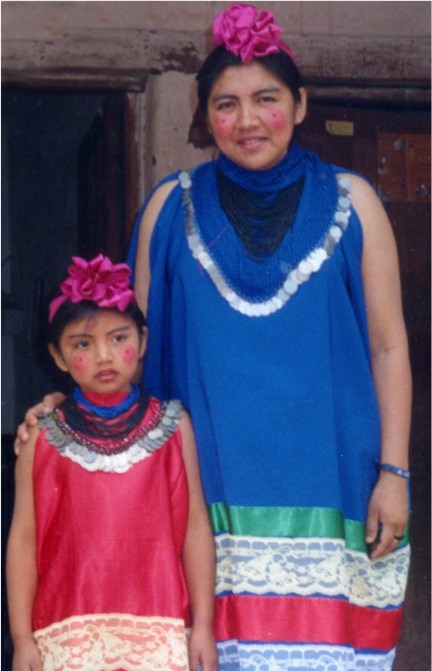 Tarija, Bolivia — Alejandra Ibañez was the lively second daughter of Capitán Ramón Ibañez, (the local village chief of Mokomokal, Bolivia), and of Angela Corimango, her mother, who provided everything possible for her large and energetic family — looking for economical food, clothing and school supplies — with a charming sense of humor.

Ramón would often laugh elatedly at the witty comments of his beloved Angela. We sisters loved to gather around the fire of the outdoor kitchen with the palm leaf roof and laugh and talk with this lively family.

The Ibañez family experienced great scarcity, as did all of the Guaraní families of this remote zone of Southern Bolivia. Alejandra inherited her mother' perky spirit and felt intensely the raw deprivation and aching exertions of her parents.

Alejandra abandoned the nearby rural school after completing fifth grade and left with a woman she knew from the city of Tarija, who was searching for a maid among the Guaraní families. She did this covertly without the consent of her parents because she wanted to provide some monetary assistance to her large family.

Her father Ramón was very troubled about his much-loved daughter, so as soon as he finished planting corn, he found a truck going to Tarija so he could look for her. After numerous inquiries, he found Alejandra working as a housekeeper for one of the wealthier families.

She greatly missed her family, but was thrilled to be able to offer some money to her father for the support of her family. Ramón begged her to return to the family, explaining that her mother needed her at home. Alejandra dutifully assured her father that she would return to Mokomokal at the end of December, as soon as she could notify her employers and they could cancel her earnings for the month.

Alejandra did return to her family, but did not return to school as her father requested. She began to make baskets for a handicraft project in the zone, and was a great support to her family.

One day a new bilingual teacher named Iberth Achuma, who was continuing a Guaraní literacy campaign, asked Capitán Ramón if he could live in one of the small storerooms in the community center. A few weeks later, after Iberth and Alejandra had a chance to get acquainted, Iberth asked the Ibañez family if he and Alejandra could get married.

Iberth recognized Alejandra's intelligence and loved her quick wit. He also perceived the family bonding of the Ibañez family and felt very much at home in their midst. Soon Iberth and Alejandra became one of the young Guaraní couples in Mokomokal.

Iberth helped organize the community's agricultural work group and encouraged both men and women to participate in the literacy program. He also helped them with mathematical calculations for distributing the fruits of the common agricultural labors.

Soon Iberth and Alejandra gave birth to a child whom they called Araceli in Spanish and Arapoti (fruit of heaven) in Guaraní. In a few years Arapoti was attending the school in Timboy, less than a quarter of a mile from the community.

One of the great struggles of the Guaraní people was their quest for land and their defense of the territory, which rightfully belonged to them. REPSOL, a giant Spanish oil company, was extracting enormous quantities of petroleum from some of their communities along the Pilcomayo River.

The Guaraní people in the 36 communities of the Pilcomayo River area were united in their efforts to demand a just recompense in exchange for this "liquid gold," which the REPSOL Company was piping and hauling away.

The Guaraní assembly worked for two years to formulate their development plan, which would include such essentials as land purchase, agricultural mechanization and health and educational programs.

When the oil company used the government to defend its interests, the Guaraní assembly decided to block one of the main roads. Alejandra and Iberth were among the Guaraní people defending their cause.

It was at this time that Alejandra, suffering most likely from cold and hunger in addition to frustration, fell to the ground in a faint, which rapidly turned to seizures. She remained unconscious while they brought her into Entre Ríos; later she was taken by ambulance to the hospital in Tarija where she remained comatose and continued to have frequent seizures.

Dominican Sr. Peggy Ryan and I were at the mission home in Timboy (near Alejandra's home but far from the scene of her sudden ailment) when Alejandra's father came to tell us about his cherished daughter's condition. He needed some money so that he and Angela could go to Tarija to be with his daughter.

Our hearts broke to see his thin, lined face bent to his lap as he shook with sobs. We agreed to do everything possible, offering to take him and his family to the hospital in Tarija in the Toyota pickup. I am crying, remembering all this.

Alejandra was put into intensive care, and treated for the seizures. She was also tested for chagas, the disease so common among Bolivians caused by the vinchuca insect which infects most rustic Bolivian homes.

The doctors were baffled that she was not regaining consciousness. Her husband and child waited outside of the intensive care unit looking worn and desperate.  Her father continued to weep, and his wife Angela was inconsolable in her anguish.

Iberth stayed at the hospital day and night, the distress visible on his face. He borrowed money from whomsoever he could for medicines. The doctors began to envisage the worst.

Peggy and I did everything that we could economically and brought food and water to the family. They slept piled around in the Guaraní university students' rooms.

After a couple of weeks of this agony the doctor said they had very little hope that she would ever regain consciousness — and even if she did it was doubtful that she would have normal faculties.

But her family members, who came to Tarija in turns, would not give up. They continued to talk to her, to pray to Tumpa, the Great God of Life, and to hope against hope.

Meanwhile, Peggy and I had to return to the mission house in Timboy to provide groceries for the open boarding school students from the rivers and mountain areas who were depending on our program to continue studying.

On our return to Tarija, Alejandra was out of the emergency room, in a private room. She was weak, but smiling and conscious. The family surrounded her bed smiling and conversing with her.  They invited us in and talked about Alejandra's return to Mokomokal in a few days.

Iberth followed us out and assured us that thereafter and forever we would be "family" to all of Alejandra's household.

This event in our life among the Guaraní people became a watershed moment, making presence and accompaniment loom high above all other projects and programs. God's abundant gift, allowing us to companion this beautiful Guaraní family, led us to be eyewitnesses of a healing marvel of Tumpa, the God of Life.

[Maura McCarthy is a member of the Sisters of Presentation of the Blessed Virgin Mary of Dubuque, Iowa. She was a missionary to Bolivia for 33 years, and she and another Presentation Sister started the mission in Bolivia, involving religious education, a vocational school, and services to catechists and health promoters with an outreach to over 100 rural communities. After retiring from La Luz Hispana in Hampton, Iowa, she plans to do research on the early history of the Guaraní missions and families in Bolivia, in the area of Tarija where she ministered.]

Ministry | The gifts of the God of Life