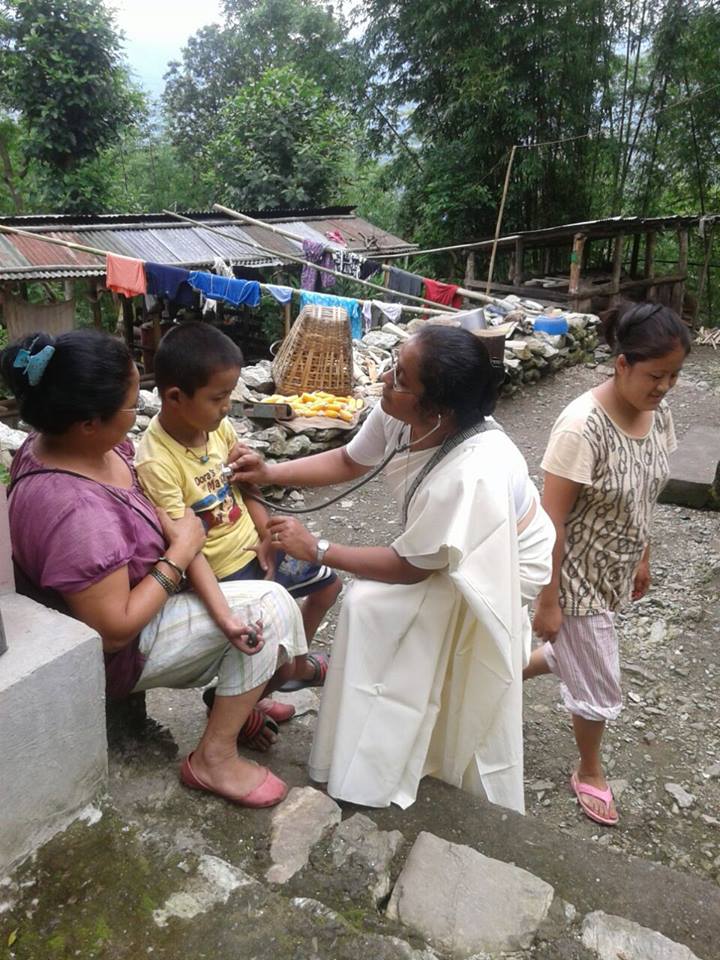 Sr. Deena Vazhaparampil, a member of the Sisters of Charity of Nazareth, examines a patient in a village in the volatile Darjeeling hills. (Arati Giri)

Patna, India — A message got through WhatsApp on July 12: "People are in a pathetic situation with absolutely nothing to eat."

It came from Sr. Deena Vazhaparampil, a trained nurse who ministers among the troubled and agitated people of the Darjeeling hills, and made me realize the gravity of the situation in Sangsay, Darjeeling, in West Bengal, India. Since then, being the communication coordinator for the Sisters of Charity of Nazareth in our province, I have been in touch with my sisters whenever possible to communicate about this struggle that had begun a month earlier.

The region has witnessed racism and fights over language and culture as the eastern Indian state is dominated by Bengali-speaking people. The majority of people in Darjeeling, many of them Gorkhas, speak Nepali. Indigenous people, who hold a strong Nepalese identity, have been demanding a separate state of Gorkhaland.

The latest protests for a separate state began in early June after the West Bengal government decided to make Bengali compulsory in schools across the state.

The Gorkha groups called for an indefinite strike of all government facilities in the hills. The administration has imposed the law that bans assembly of more than four people around the district magistrate's office, treasury building and the courts.

It also deployed paramilitary forces in Darjeeling, epicenter of the protest, and discontinued some internet service in the area. Bimal Gurung, one of the Gorkha leaders, has said they would not end the strike until they have achieved separate statehood.

The mission statement of the Sisters of Charity of Nazareth, based in Kentucky, reads, "We and our Associates are committed to work for justice in solidarity with oppressed peoples, especially the economically poor and women, and to care for the earth. We risk our lives and resources, both personally and corporately, as we engage in diverse ministries in carrying out this mission."

We thus are called to join those providing shelter and relief to thousands caught in violent protests and the blockade in India's Darjeeling hills.

The hills, the northern region of West Bengal, famous for a brand of tea, have been shut down for nearly two months after the Gorkha National Liberation Front and the Gorkha Janmukti Morcha (People's Liberation Front of Gorkha) reasserted their demand for a separate state.

People are in distress as food supply lines have been blocked, says Vazhaparampil, working in Sangsay, a village some 50 km (31 miles) east of Darjeeling town. 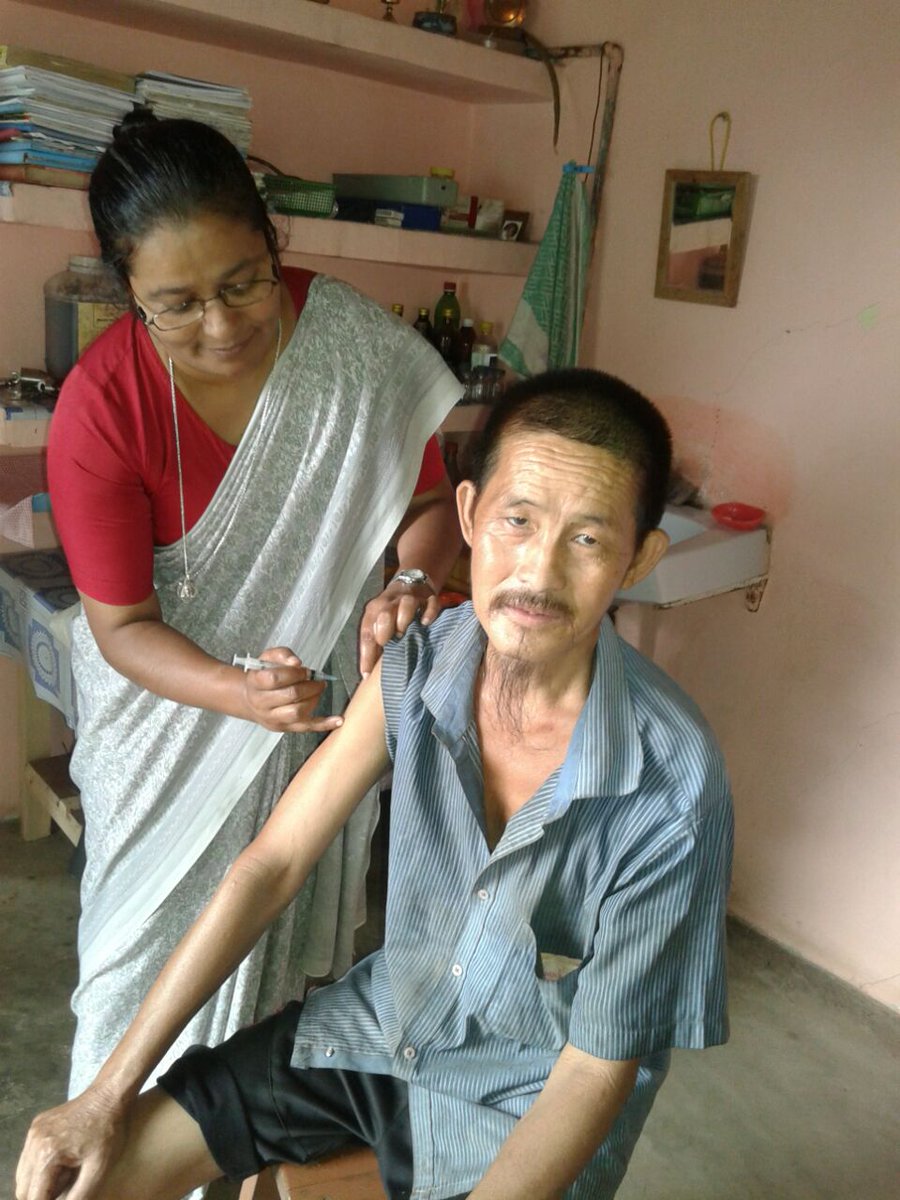 Sr. Deena Vazhaparampil examines a patient at their clinic in Sangsay Village in the Darjeeling hills. (Bindu Chetri)

"Barring medicine shops, all other shops, schools and colleges are shut down," she told Global Sisters Report in the first week of August.

The struggle of the Gorkhas and their demand for Gorkhaland is almost 70 years old.

Ever since the Nazareth sisters began this mission in October 1986, our sisters were part of the struggles of people for a separate state. In those days, with limited resources and communication, sisters and the people shared what they had with each other to sustain themselves for prolonged periods, said Sr. Maria Palathingal, a pioneer in the mission.

In the recent unrest, crossfire killed five people on July 4 in Kalimpong. So far more than 20 people have been killed in various parts of the hills.

Every week, about five people take turns to sit in at hunger strikes at Kalimpong and Kurseong, another town. One person died during a hunger strike in Kalimpong.

Meanwhile the blockade has stifled the life of the hill people.

As true missionaries living out the mission statement of their congregation, Nazareth nuns offer health care assistance. Their two-bed dispensary at Sangsay is overflowing with patients, says Vazhaparampil. She and a health assistant now attend to more than 50 patients daily. In normal times, they get around 20 patients. 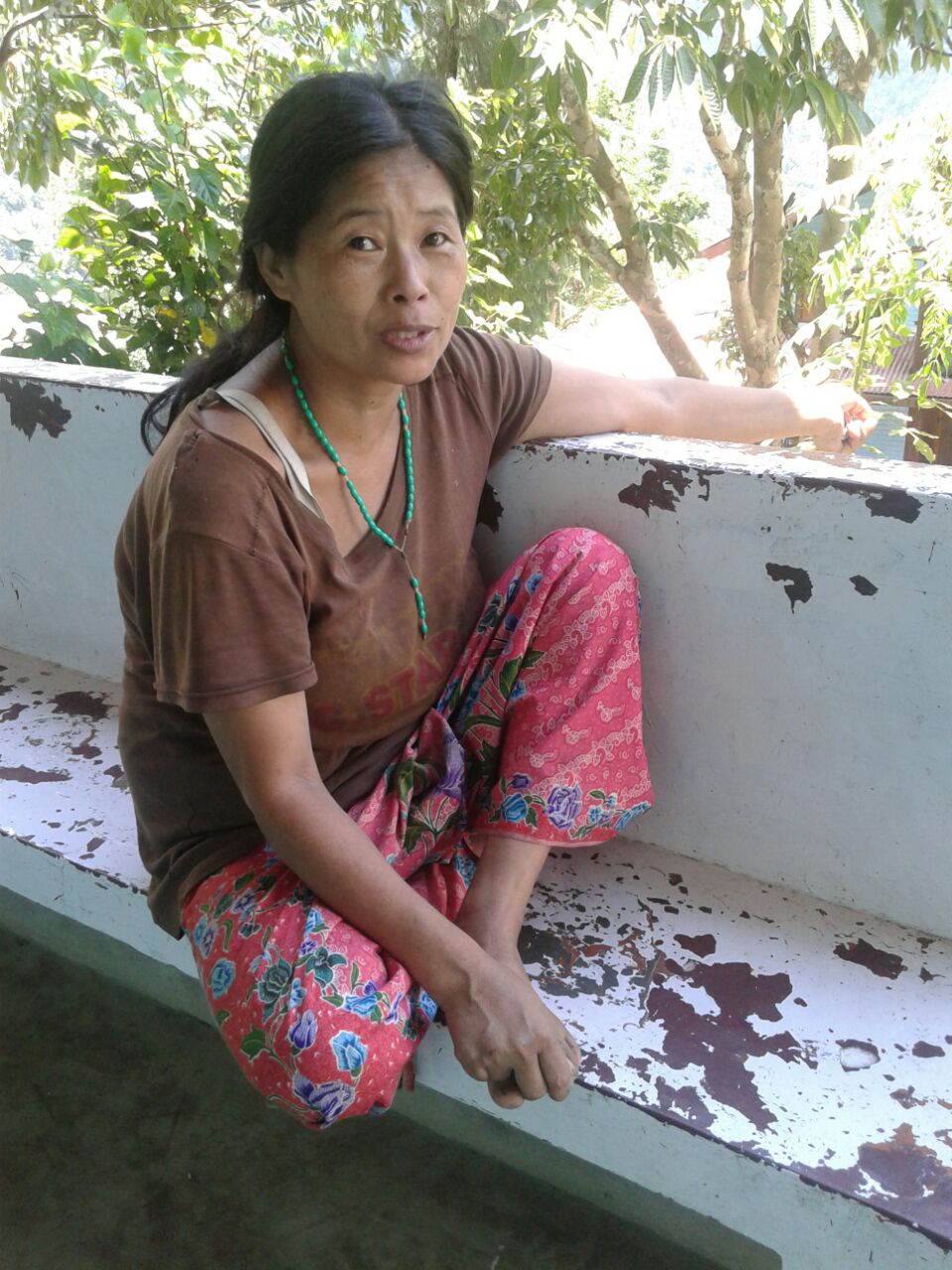 A sick village woman sits at the clinic of the Sisters of Charity of Nazareth at Sangsay Village waiting for medicine. (Deena Vazhaparampil)

Serious cases wait in line to get a bed. "We make the beds free for serious patients by shifting the patients who feel a bit better to the examination table while others wait on the veranda of the dispensary," the nun explains.

Most severe cases they get are for low blood sugar and low blood pressure due to lack of food.

"I have already conducted six deliveries during this agitation. Two complicated delivery cases were sent to the hospital in Kalimpong, the nearest town," Vazhaparampil adds.

Risking her life, she takes seriously ill patients to Kalimpong in the back of a jeep, with running intravenous fluids, a stethoscope and a blood pressure apparatus on hand. "The hospitals in the town have no regular supply of important life-saving drugs," she bemoans.

When the market opened for the first time after 11 days of protest, the nuns rushed to Kalimpong to get medical and food supplies. Nazareth Sr. Tarcisia Hembrom says they rushed back when they heard an announcement over a public address system to leave the town immediately.

Life has not been easy for our sisters or the people, who live each day in anxiety and uncertainty.

The schools have also decided to promote other students to the next grade without having them take the required exams at the end of the school session.

The Nazareth nuns manage St. Dominic Middle School that uses both Nepali and English in the classroom. It has 183 students from grades one to 10.

"When the corn crop was gone, most of our 16 class nine students went to Sikkim, for manual work," Hembrom, the principal, told me. She said she had a tough time getting photographs taken of the students to register them for 10th grade in the diocesan school in Pedong.

Since July 31, the nuns started three-hour coaching sessions for their 15 10th-graders in a room in their convent. Hembrom also took in students from other schools for the coaching.

The Nazareth nuns say they have limited access to communication channels, with the WhatsApp global messaging app as their only option.

The villagers and nuns pull together their resources and share whatever they can, Vazhaparampil says. 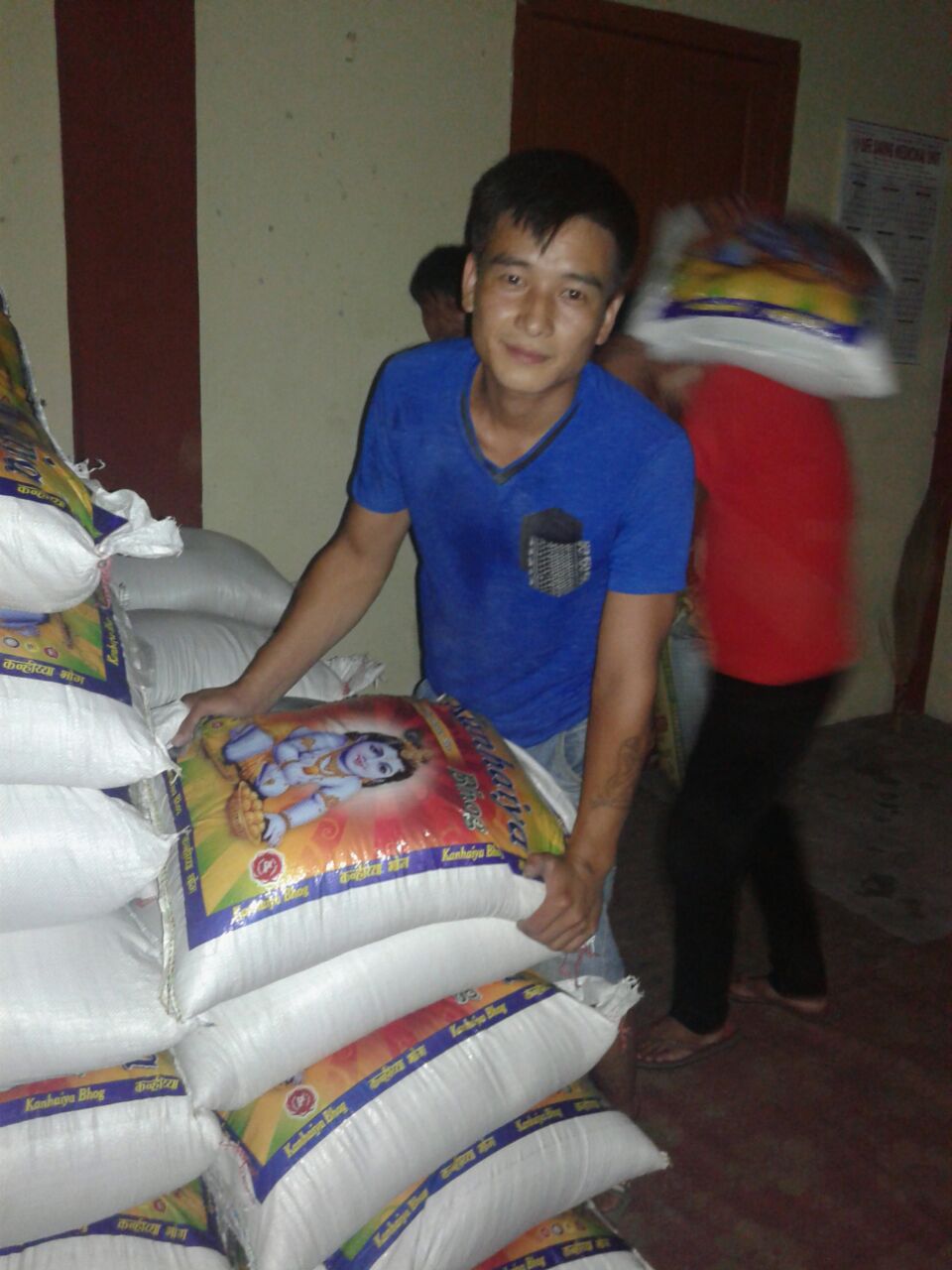 Villagers volunteer to stock food items at a center of the Sisters of Charity of Nazareth at Sangsay Village in the Darjeeling hills. (Sr. Tarcisia Hembrom)

She told me a story about wondering how they could help people without essential food. With a prayer in her heart, she stepped out of the house, in front of the parish church. A good Samaritan was on his way to visit the Mother Teresa Sisters in Kalimpong with five quintals of rice, a bag of potatoes, puffed rice, some pulses and some biscuits. He wanted to donate those things to the poor in memory of his late father. Afraid to proceed further due to the blockade, the man apologetically asked Sr. Deena if he could unload the things in the church and whether she could distribute them to the people. It was an answer to her prayer. As the news spread of the arrival of the supplies, people rushed to the convent. Everything was distributed the same evening.

"I was sad that we could give only a few kilograms of rice to each family," she commented.

We mostly minister in remote rural areas, and cater to about 600 families in 10 villages in Sangsay. Most are small landowners who cultivate vegetables for a living. The turmoil has prevented people from harvesting their crops. In the summer, hill people cultivate a special variety of extremely hot and expensive chilis, squash, corn, tomatoes, French beans and pumpkin. Villagers take their farm produce on their backs to the bi-weekly Kalimpong market, five miles away.

Thomas Lepcha, a villager, says he cannot sell his chilis this year. "My bumper crop is wasting away in the field itself," he told me.

Some young people now ferry the produce to the market on four-wheelers from various places in the hills.

Vazhaparampil, president of the Catholic Health Association of India, says she has contacted her sources at the national level to mobilize resources. 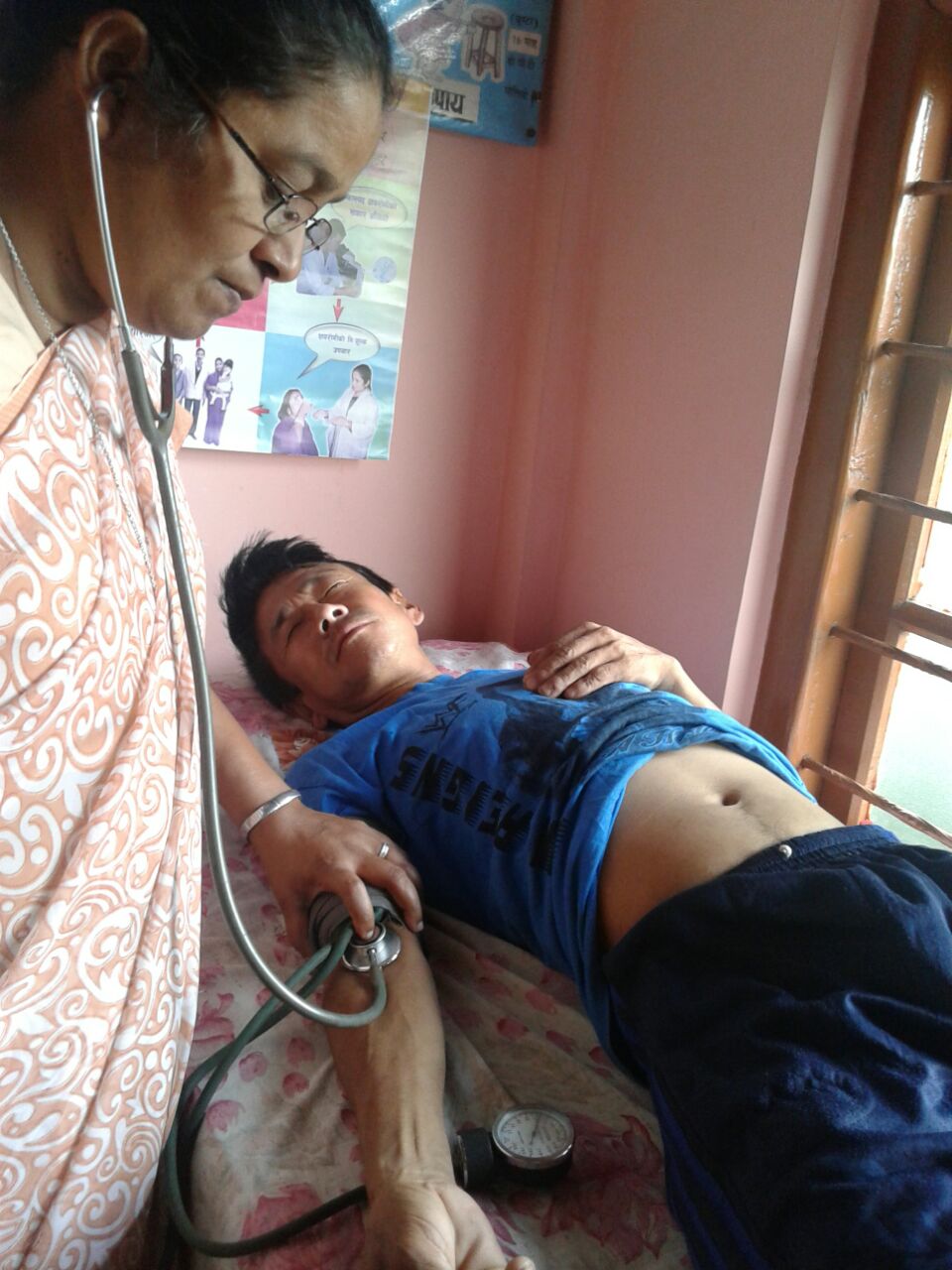 Nazareth Sr. Deena Vazhaparampil examines a patient at their clinic in Sangsay Village in the Darjeeling hills. (Bindu Chetri)

"Luckily the money was credited to our bank account and we hired a Sikkim truck with a banner, 'Relief for Humanitarian Crisis in Sangsay,' and followed the army vehicles to Sangsay. It was a grave risk," Vazhaparampil explained.

They distributed the supplies on Aug. 4, the feast of St. John Vianney, the patron of parish priests. People do not go out of their villages, fearing attacks from others. The Lepcha tribe, which claims to be the original people of the hills, supports the government policy and opposes the demand for a separate state.

"Risking danger, I traveled thrice to Siliguri (60 miles) to get medicines and food with a special permit from one of the elected representatives of the area," says Vazhaparampil, who has contacted Bishop Theodore Mascarenas, secretary general of the Catholic Bishops' Conference of India, for help.

Ever since the Darjeeling agitation began, the whole SCN family has been in prayer with the sisters who minister in Sangsay. As a true Sister of Charity of Nazareth, Sr. Deena and her community is doing all within their limits to stand with the people, as one among them and yet set apart, in helping them to tide over this crisis.

[Malini Manjaly is a Sister of Charity of Nazareth based in Patna, the capital of Bihar state in eastern India. She oversees the communication department of the congregation's Patna province.]

Nowhere to go: Young people cope with homelessness in the US