"We are tired," "This is too much," "I am angry": These were some of the comments sisters in Uganda made, after study and reflection on how the social teachings of the Catholic Church parallel to social issues affecting Uganda.

The Catholic sisters — under the umbrella of the 6,000-member organization of the Association of Religious in Uganda — had resolved to advocate against trafficking in persons. This collaboration proved itself useful when the sisters critically analyzed their society, which is being robbed of its basic humane values and the moral fiber that helps people attain their highest potential and human dignity.

The sisters' motivation came from several sources: the principles of the Scriptures, the lives of the saints, African proverbs, and Bible stories like Genesis 18:16-32 (Abraham pleads for Sodom and Gomorrah), Esther 5-7 (Esther takes risks for her people), Luke 11:5-8 (an importunate friend pleads for one in need), John 10:10 (Jesus gives the fullness of life), and Luke 4:18 (The manifesto of Jesus, who comes to bring liberty to the oppressed).

I think it was St. Catherine of Siena who urged us to cry out, saying it is "silence that kills the world." And church leaders have assured us that acting on behalf of justice is part of living the Gospel. As Brazilian Archbishop Dom Hélder Câmara once said, "When I give food to the poor, they call me a saint. When I ask why they are poor, they call me a communist."

Nelson Mandela insisted that "overcoming poverty is not a gesture of charity. It is an act of justice." Some of our activists have said that justice is an integral part of our mission as religious, and that we stand on two feet of Christian love: charity and justice.

In a workshop that was organized and facilitated by Africa Faith and Justice Network of Washington, the participants began to understand various underlying issues that put Africa in a global context, and assessed challenges facing the continent. We discussed how 150 years of slave trade had had adverse consequences, and how there are signs that it is still not healed.

The time of colonization that contributed to the slave trade was characterized by torture as well as "divide and rule" policies. Even after the wave of decolonization, Africa remained in the grip of foreign powers. And the influence of foreign powers extends to individual actions: for example, do Africans who facilitate trafficking in persons realize that they are continuing the slave trade?

The workshop participants went on to assess the role of the church in society, specifically dwelling on the prophetic mission of the church. We concluded that it is not easy to separate church and society, because the believers are members or citizens of the society.

We came to realize that globalization adversely affects the continent of Africa. Out of greed and the short-sightedness of leaders and lawmakers, business people import poison and destroy the local economy, by making Africa a home for old discarded items like used refrigerators, computers, and poisonous body lotions and edibles.

Another issue at stake is the devaluation of our currency; Africa is impoverished by its wealth. With most African leaders privatizing the state's resources, our heritage has been sold for a bowl of soup, as in Genesis 25:29-34.

The absence of servant leadership, a lack of rule of law and accountability, and a lack of interest in the common good and human security, all of these circumstances lead to weak institutions. The consequences lie heavy upon Africa, and Uganda in particular.

Right after the three-day workshop, a team of 32 sisters (with Dominican Fr. Aniedi Okure of Africa Faith & Justice Network as coordinator) set out to visit the Ministries of Internal Affairs; Foreign Affairs; Gender, Labour and Social Development; and the Uganda Human Rights Commission. With Lina Waru, a lawyer and advocate for social justice, a group of 13 sisters met the Right Honorable Rebecca Alitwala Kadaga, speaker of the Parliament of Uganda.

These groups expressed one common point in all the meetings: the need for collaboration. They also confessed that trafficking in persons is a complex undertaking. In the words of one sister, "Because prominent government officials are involved, security organs and the international mafia are part of it. Hence there is a call for concerted effort to address it."

The groups that the sisters met from the ministries and Parliament agreed that "big shots in the government" are actually behind trafficking in persons. They have legal agreements to export labor, and use that authority to abuse people.

Finally the sisters developed a press statement and called a press conference, which went viral through the various media outlets present: the New Vision and Vision Group, the Daily Monitor, and Urban TV, among others.

The sisters are planning for a joint meeting with various stakeholders and collaborators to forge ahead in addressing the issue of trafficking in persons, gender-based sexual violence and similar atrocities committed in our society.

I am proud to see that sisters are lifting our voices to address the evils of society, and I am excited to see that collaboration making us strong.

As the African proverb goes, "When spider webs unite, they can tie up a lion." 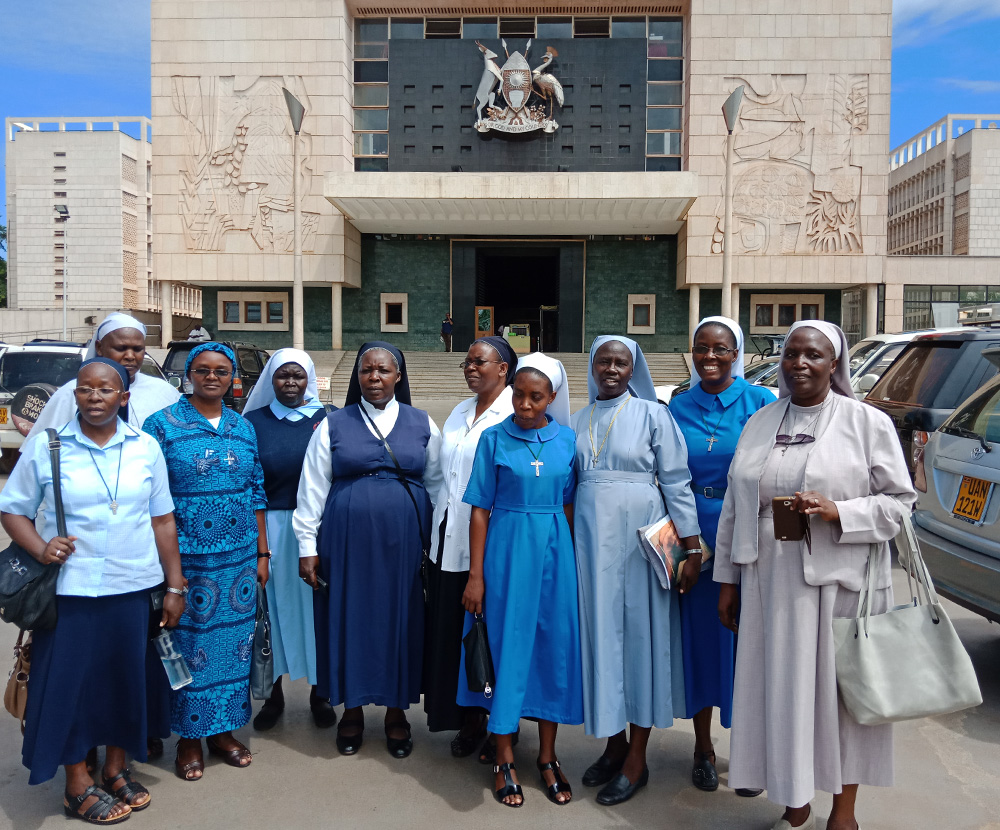 Image
Sisters in front of the Parliament of Uganda c.jpg