Taco emojis and the catacombs of the early church

Global Sisters Report has enjoyed a partnership with A Nun’s Life Ministry since our site went live in April 2014. Srs. Maxine Kollasch and Julie Vieira share audio clips every week from their popular podcasts and now take turns writing a monthly column. Drawing on their experiences of online presence and using a lens of Scripture, they each will explore how social media offers new ways of witnessing Gospel values.

Just the other day, a friend texted to let me know that some long-awaited good news had arrived. She wrote:

It was a simple message, communicated in a way familiar to Christians not only today but in centuries past.*

Emoji, a Japanese word, roughly translates to pictograph. The popularity of emojis has skyrocketed with the use of mobile phones, texting and social media. Emojis are actual pictures in icon form, such as a taco or a yellow smiley face. They are a succinct, economical way to express the everyday stuff of life — facial expressions, ideas, food, locations, actions. Emoji provide imagery that is, for the most part, readily understood across languages, cultures, ages and religions.

From the very beginning of the church, believers used simple, easy to understand imagery to express and engage with their faith. One of the first places that Christian imagery appeared was in the Roman catacombs. The catacombs were underground sites, often abandoned quarries, used for burial. Christians also used the catacombs for prayer services, especially to commemorate the martyrs and saints. Christians drew art that reflected those who were buried in the chambers. They also made many simple drawings to illustrate stories from the Scriptures and the lives of the saints.

A Vatican document makes the point that catacomb artwork helped people understand their faith. The document notes, "Some concepts which are difficult to express are represented in a simple way. To indicate Christ, a fish is depicted; to signify the peace of heaven, a dove is represented; to express firmness of faith, an anchor is drawn." This was especially important for early Christians, many of whom could not read or write. It also made the faith accessible to Christians from other lands and languages. 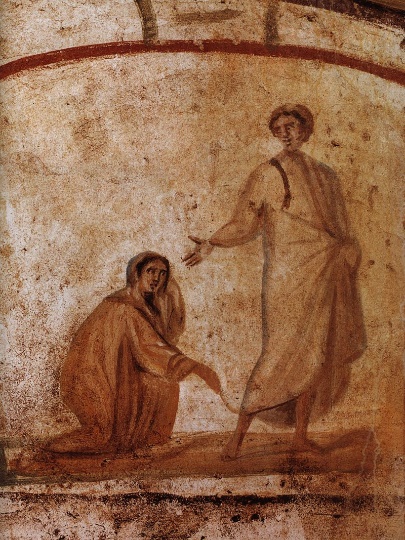 The images were like a universal language that all Christians could understand and could use to deepen their faith. For example, an image in catacomb art depicts the story of a hemorrhaging woman in the crowd. Kneeling in faith, she touches the edge of Jesus' robe and is healed. Jesus is depicted in a posture of openness to the woman and, by extension, to all believers who turn to Jesus for help.

Just as simple pictographs helped people centuries ago to express,  they can also help us today. When I text one of my nuns, for example, I often include the emoji of the cyclist, which she knows is an important aspect of my spirituality and a symbol of my spiritual journey. When I stop for a rest break during a bike ride, I use the emoji to convey my experience of God's good creation — the winding paths, steep up-hills and refreshing downhills, and people and critters I've encountered along the way. To type out a message on a mobile phone keyboard that expresses all of this would be time-consuming and in a sense incomplete regarding how the journey feels. But the emoji captures it all simply.

When my friend texted me, it was a way for me not only to share in the joy of her good news. It also was a way to celebrate God's presence and activity in her life, my own life, and in the world, reminding me that God walks with us every day.

* This translates to "Praise be to God."

[Julie Vieira is a member of the Sisters, Servants of the Immaculate Heart of Mary of Monroe, Michigan, and co-founder of A Nun's Life Ministry, which was founded in 2006.]

Taco emojis and the catacombs of the early church